It was certainly a weekend of football that proved that the Premier League is still alive and the big clubs are getting too complacent.

Losses for Manchester United, Manchester City and Tottenham headlines the weekends results, with Liverpool picking up a dramatic late penalty to send them 8 points clear.

Dream debuts for both Aaron Connelly and Matty Longstaff warmed the TVs and hearts of viewers all around the world.

We here at tribalfootballlook at the top performers from Matchday 8 in the Tribal Football Team Of The Week. 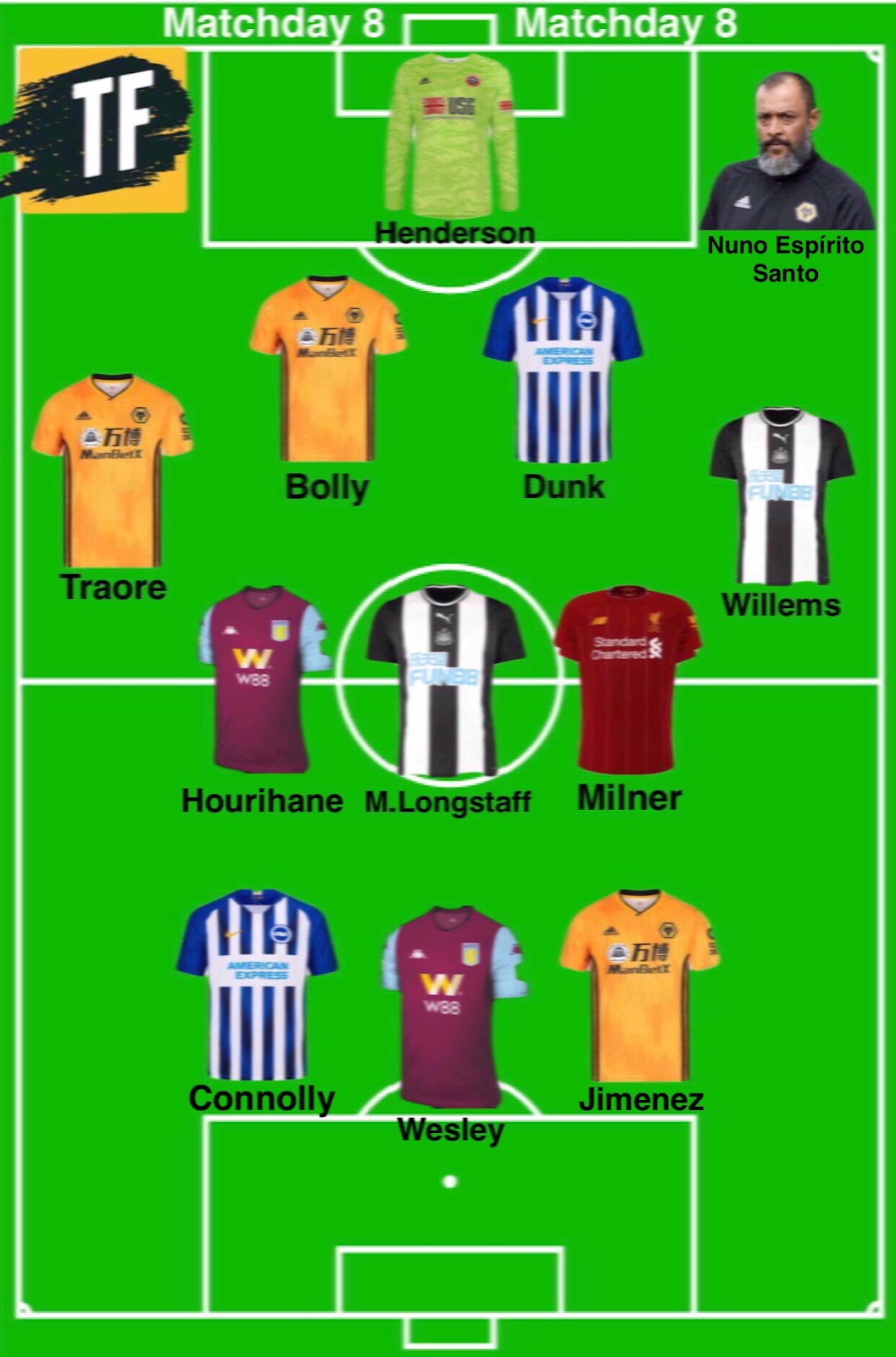 The Manchester United prodigy responded in the best possible way after a disappointing mistake last week against Liverpool.

Despite a bleak afternoon between the sticks at Vicarage Road on Saturday, the Englishman stood up when needed making two brilliant saves to salvage a point for the Blades.

The first a terrific one-on-one stop from Danny Welbeck, and the second a superb reflex save from a header from point-blank range deep into stoppage time.

Wolves' astonishing win away at Manchester City extraordinarily included a clean sheet, achieved primarily through the heroics of Willy Bolly.

The Frenchman was dominant in the backline, winning 5 aerial duels, making 2 interceptions as well as a colossal 12 clearances.

It isn't a mean feat to keep a City side of Sterling, Aguero, Mahrez and Silva with 18 shots on goal to 0 goals.

In Brighton's shock demolition of a dispirited Tottenham side, it was the captain who held the fort at the back, keeping a clean sheet.

Restricting the dangerous Kane and Son to only 1 shots, Dunk was everywhere defensively recording a whopping 10 clearances.

To cap of a strong performance, in the 65th minute the skipper played a long ball through to Connolly, who scored the Seagulls third, confirming all 3 points.

Another star performer in the historic Wolves win, the powerful Adama Traore was the headline act, punishing the City defence with his pace and strength.

The Spaniard started the game at wing-back where he curtailed the likes of Raheem Sterling, making 2 tackles and interceptions.

However his move into the middle of the ground paid dividends as he was on the spot to cooly finish both goals past Ederson, gifting Wolves a surreal 0-2 victory.

The pacey and powerful Dutchman finds himself in the team of the week after an all-round impressive performance in Newcastle's shock 1-0 win over struggling Man Utd.

Defensively, Willems kept the likes of Pereira and Dalot toothless (0 key passes and only 1 dribble), making 3 tackles and 2 interceptions.

Offensively, Willems combined terrifically with the exciting Saint-Maximin, constantly bombing down the wing to support attacks. In total, he registered 3 successful dribbles and 3 key passes, one of which the clever assists to Longstaff's winner.

No need for a moment of the week this article as you won't find a better story than Matty Longstaff's dream debut against Manchester United.

The 19-year-old local lad, lined up for his beloved Newcastle for the first time alongside his brother, the stage was set.

From the moment the referee blew his whistle to start the game, Matty Longstaff looked at home in the Premier League. Pinging Long range passes and harassing the Manchester midfield, he added an important element to the Newcastle.

With both him and Sean pulling the strings, Newcastle were on top for the match, however the best was yet to come.

After hitting the crossbar with a terrific volley in the first half, Longstaff was goal hungry, and in the 72nd minute, the ball rolled out to him on the edge of the box.

The debutant struck the ball sweet and fizzed it past De Gea, sending the Gallowgate into hysteria. His goal gifted the magpies a well-deserved 3 points, capping off a dream night under the lights of St James' Park.

The experienced Liverpool veteran, put in a mature performance as the Reds scraped past Leicester with another tight victory.

Operating at a pass accuracy of 87.3%, Milner was the attacking spark for the Liverpool side when he played a beautiful weighted long through-ball that put Mane in on goal, who accordingly made the score 1-0.

When awarded a penalty in the dying moments of the game, it was of course the cool-headed Milner who again showed terrific composure to tuck the penalty away, pulling Liverpool 8 points clear at the top.

In Aston Villa's 1-5 destruction of Norwich at Carrow Road, despite many star performers in midfield, it was the Irishman who emerged as the Villians top performer in the centre of the park.

In the 30th minute, Hourihane made a run into the box and fizzed in a cross, putting the ball on a plate for Wesley to tap home.

Again in the 61st minute, he picked the ball up outside the box and after a solitary touch, smashed the ball into the back of the net.

Aston Villa's record signing flexed his muscles with a damaging performance against Norwich.

The number 9 set the tone in the opening twenty minutes with two clinical finishes, showing terrific control and goal sense. Late in the game, Wesley also picked up an assist to cap of an imposing performance.

In total, Wesley had 5/6 shots on target and won 3 aerial duels.

It was an unusual role for the Mexican striker, who found himself having the be at the ready for the rare dangerous forays that Wolves would experience in the City half.

And ready he was, constantly a threat with both his dribbling and pace making the city defence look very shaky.

Jimenez registered 5 dribbles and 3 key passes, including assists for both goals. He showed class and composure when charging past city defenders and playing through Traore deftly with the outside of his foot.

Another heartwarming story from the weekend as academy graduate Aaron Connolly tore through Tottenham in his first Premier League start.

The Irishman was lively up top, having 6 shots on goal, making 2 key passes and despite being the shortest player on the pitch, won 4/4 aerial duels.

However his goals were what put his name up in lights, the first, after his deft flick from a cross was saved, he was first to react turning in the rebound for 2-0. The second after receiving a long ball, Connolly charged towards goal and curled the ball past Gazzaniga from long range.

After what has been a dreadful start to the campaign for last years emerging team, Manager Nuno Espirito Santo has seemed to have turned this ship dramatically over the past week.

Recording a relieving 2-0 win over Watford last matchday, and then picking up a colossal 3 points away at Besiktas mid-week in the Europa League, Wolves pulled off the best one of them all with a historic win over the 2x Premier League holders Manchester City.

Playing with five at the back, Wolves were defensively solid all game but still had counteracting volatility with both Jimenez and Cutrone. However, his decision to move Adama Traore from right-wing-back to up forward proved most decisive, as he possessed the ability to damage City with his pace and power, something he did twice in their 0-2 win.