It was another weekend of drama in the Premier League, with Dean Henderson's rare blunder gifting Liverpool a 16th consecutive win.

Manchester City once again took all 3 points, Leicester destroyed Newcastle to concretise themselves in the top 3 and Manchester United and Arsenal battled it out for a tough draw.

We here at tribalfootball look at the top performers from Matchday 7 in the Tribal Football Team Of The Week. 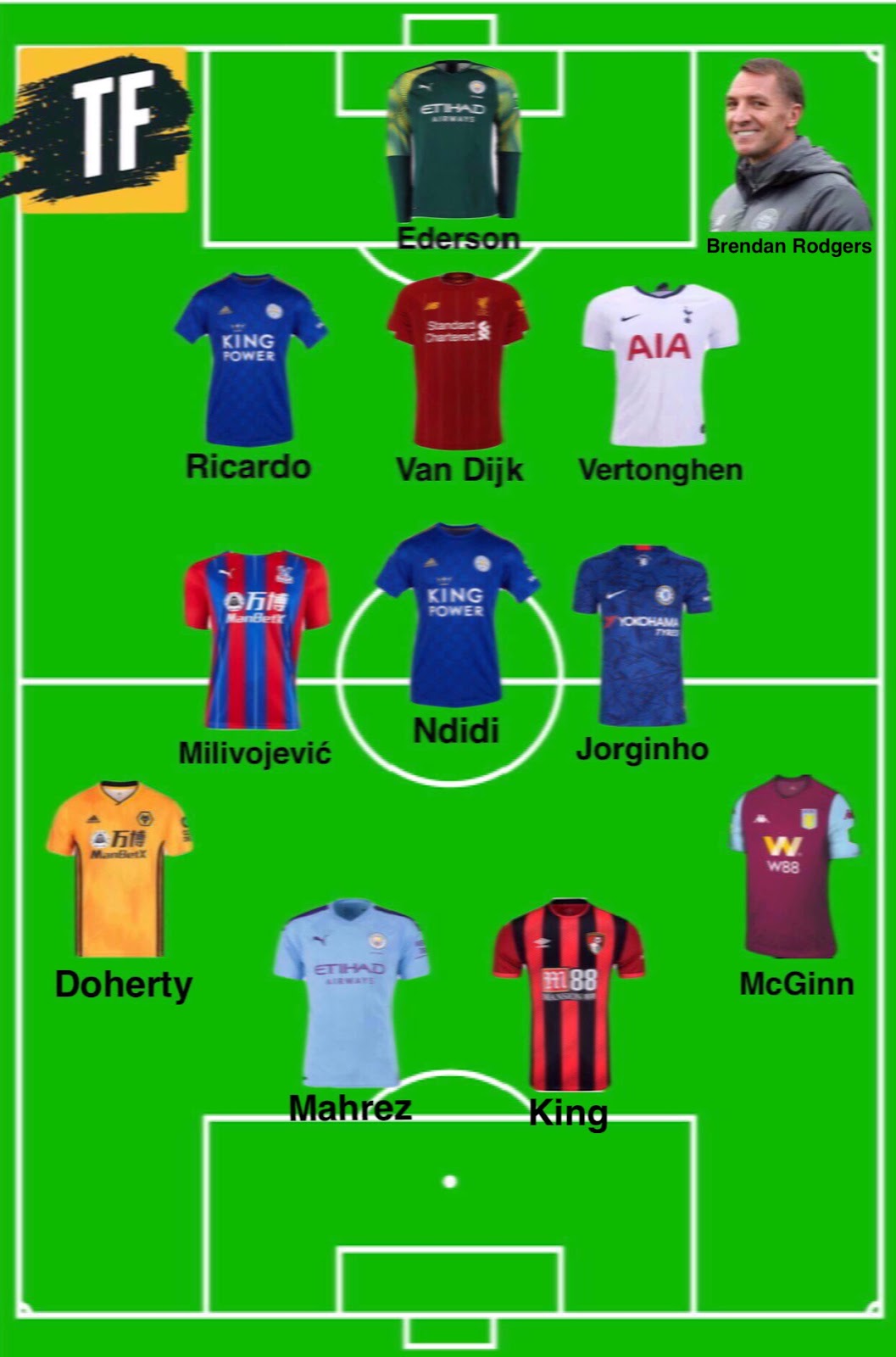 The City goalkeeper was back to his best against Everton, proving why he belongs in the star-studded Guardiola line-up.

In total the Brazilian made 6 saves, 2 of them terrific reflex stops to deny the imposing Yerry Mina from corners.

The world's best centre-back was again crucial for his side, keeping another clean sheet in the club's 16th consecutive win.

Keeping the ominous home side to just 2 shots on target, Van Dijk was huge in defence winning 11 aerial duels and 8 clearances.

The Dutchman was also key to the sides offensive play making 12 (out of 16) accurate long balls.

With a depleted 10-men-Spurs backed into a corner against an oncoming Southampton side, the Dutchman was instrumental in helping his side cling onto a 2-1 victory.

Vertonghen won 4 aerial duels, made 3 interceptions and made 5 clearances in a strong performance.

Twice in two weeks the Portuguese full-back finds himself in the team of the week, proving why he was made Leicester's player of the season last time out.

Bubbly as always bursting down the right flank, Ricardo was a constant threat to the Newcastle defence and was in everything for Leicester completing over 100 passes.

However it was his 40 yard blistering run and left-foot long-shot goal that put the Foxes 1-0 up that stole the headlines.

The Nigerian was at his supreme defensive best, making tackles and breaking down Newcastle offensive plays for fun.

In total Ndidi made 9 tackles and 5 interceptions, furthering his reputation as the leagues top tackler, as well as scoring Leicester 5th goal with a lovely bit of control in 2nd half injury time.

Crystal Palace's cool, calm and collected captain was key in the Eagles 2-0 win over Norwich.

The Serbian midfielder was defensively solid making 6 tackles, and made his impact on the scoresheet, typically converting from the penalty spot.

With the repeat absence of N'Golo Kante, the Italian playmaker took control in the centre of Chelsea's midfield, pulling the strings in the blues 2-0 win over Brighton.

Completing 69 passes at an accuracy of 89.9%, Jorginho made 3 key passes and netted the first goal of the game, dispatching one of his trademark penalties.

With his defensive duties on display as well, he made 2 tackles, 4 interceptions and 2 clearances in an all-round top performance.

The sprightly Scotsman has been consistently one of the top performers for the Villians in the return to the top flight of English Football. In Villa's tough 2-2 draw with Burnley, it was again McGinn who provided much needed attacking influence to his side.

McGinn registered 4 dribbles and 4 shots on goal in total, and thought he had opened the scoring before his first goal was chalked off by VAR.

McGinn however would not leave the match without his name on the scoresheet, smashing home a volley in the 79th minute. It was his third goal for the season.

In a much needed win for Wolves over struggling Watford, it was the unlikely source of stalwart Matt Doherty that produced a best on ground performance.

The Irishman scored the first goal of the game, tapping home Neto's delightful cross. He was also very involved in the second, charging down the wing and crossing the ball onto the head of Gibbs-White, whose shot deflected off Janmaat to make it 2-0.

It was another scintillating performance from the Algerian showboater, whose talent on the ball once again shone through in City's 1-3 win over Everton.

Mahrez appeared to be involved in all of City's attacking play, fooling defenders for fun. In total, he had 5 shots on target (from 5 shots) and made 5 key passes all while operating at a pass accuracy of 91.4%

Mahrez played the pass to De Bruyne in the first goal, scored a beautiful free kick for City's 2nd, and it was his trickery that led to the 3rd.

The Norwegian is putting together another impressive start for the Cherries, with a man of the match performance in Bournemouth's exciting 2-2 encounter with West Ham.

King scored the first goal of the match, cleverly dispatching the loose end on Rico's cross, making it 50 goals in English Leagues for the attacker.

At the start of the 2nd half, King cleverly used the outside of his foot to play through Wilson who made the score 2-1.

Brendan Roger's Leicester side has been highly praised, with many pundits predicting their imminent rise into the top 6 after gutsy performances against some of the League's top sides.

However, their rise to the top has been halted by their inability to consistently beat the Premier League's lesser teams, unlike that of the top sides.

This assumption was thoroughly dismantled as Leicester ruthlessly tore apart the struggling Newcastle side.

After a positive start with the scores at 1-0, the foxes stepped it up a level when the Magpies went down to 10 men, putting a further four goals past Dubravka in goals.

It's a performance like this that will get the top 6 teams shaking in their boots.

Is there a better right-back in the Premier League than Ricardo Pereira right now? pic.twitter.com/uDEZLVM3CR
— Goal (@goal) September 30, 2019