In what has to be one of the most dramatic Premier League match-days of the season, unexpected and unlikely wins were scattered all across the weekend's fixtures.

Everton turned around a 2-0 deficit to win 3-2 despite going down to 10 men, Bournemouth got all 3 points with 10 men also, Manchester City somehow couldn't convert a goal as they fell at the hands of Tottenham, meaning Liverpool are some 22 points clear at the top of the table, but that does not mean they were going to slow down.

We here at Tribalfootballlook at the top performers from Matchday 25 in the Tribal Football Team Of The Week. 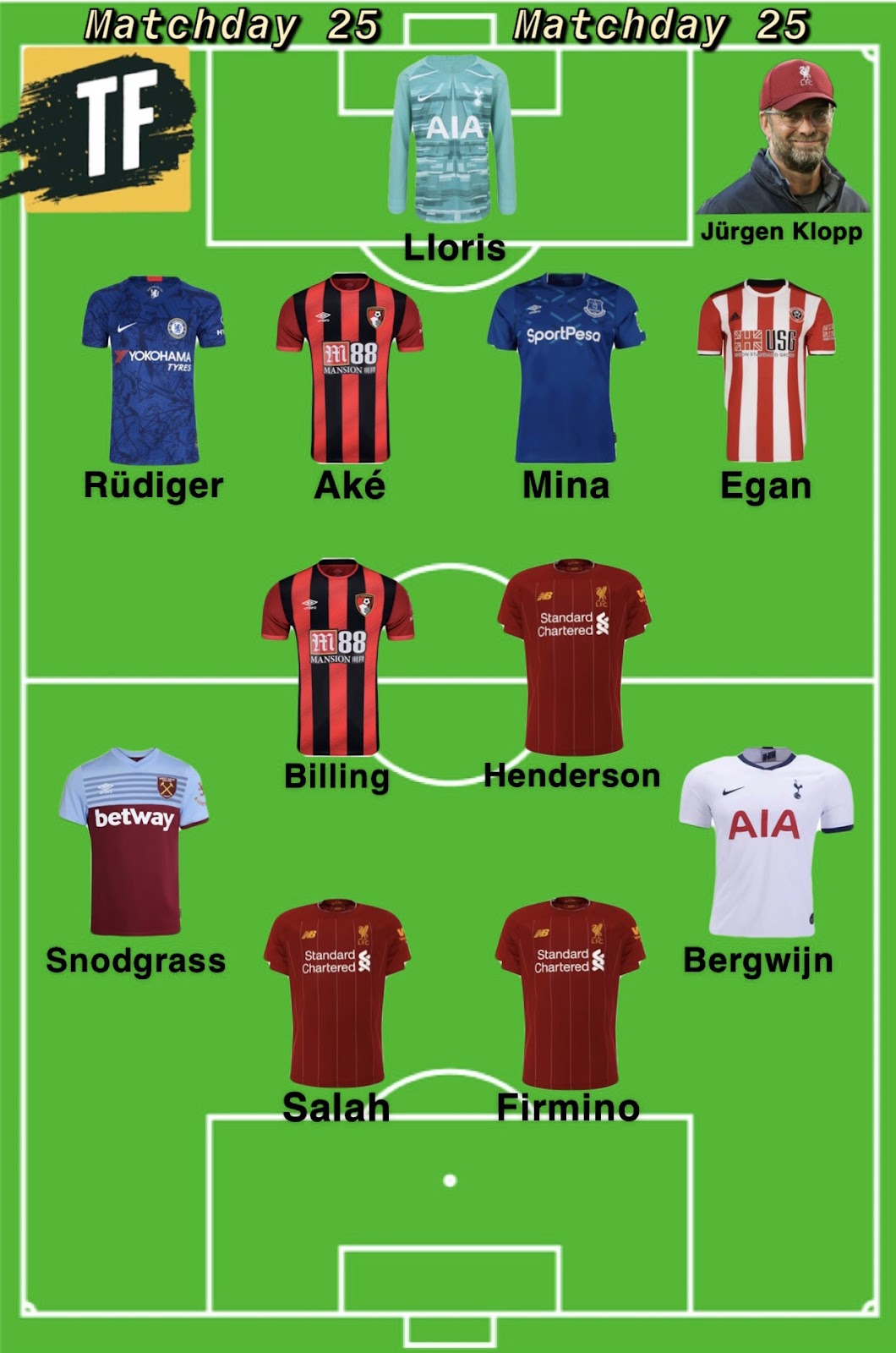 Finally back after his long spell in the injury ward, Tottenham fans around the world are rediscovering how much Hugo Lloris means to this side.

In his 2nd game back, the Frenchman made 6 saves including a superb stop with his foot to deny Raheem Sterling, and penalty heroics to keep out Ilkay Gundogan, keeping a clean sheet against the potent Manchester City.

In the 'week of the scoring Centre-Back', the towering Colombian brick-wall got his name on the scoresheet in Everton's dramatic comeback win at Vicarage Road.

Mina was on hand to scramble in the first of Everton's goals, and then powered his way to head home the equaliser.

The second of the weekend's defensive braces, Antonio Rudiger made his contribution to his side at both ends of the pitch.

Both from set-pieces, Rudiger rose highest to head home two goals, the second of which a beautiful looping header from the middle of the box. He also won possession for his side 11 times, the most of any Chelsea player.

In what was a massive result for the Cherries, Bournemouth's talented centre-half Nathan Ake was a huge part of their 10-man triumph.

Ake was defensively rigid with 3 interceptions, 5 clearances as well as being in the right place at the right time to net home Bournemouth's second goal.

Following their win at Selhurst Park, Sheffield United have rocketed up into European contention, largely down to their trademark defensive stubbornness.

This again was a standout on the weekend, with the pick of the blades defenders being John Egan, who had 7 clearances, 3 interceptions and won 4 aerial duels.

There is simply no stopping this Liverpool team and there is no stopping their Captain, Jordan Henderson, the beating heart of this dominant side.

Leading his side in both defence and attack, Henderson smashed home the Red's second goal and curled a beautifully weighted through-ball for Salah to score their third.

Bournemouth's gangly Danish midfielder put in a true all-round performance in their win over Aston Villa, stamping his authority on all facets of the game.

Biling won 8 aerial duels, made 7 tackles and 9 clearances as well as creating 2 key passes and opening the scoring for the Cherries.

The Scotsman produced a standout performance in West Ham's goalfest draw at home to Brighton.

What a way to start life in a Tottenham Hotspur shirt. The talented Dutchman, fresh off the plane from PSV Eindhoven, made a dream debut against Manchester City.

Bergwijn opened the scoring with a simply special goal, volleying the ball goalwards first time from his chest control, not even allowing the ball to hit the ground first.

Typically it is the job of the Centre-Forward to find his way into the team of the week by putting the ball into the back of the net. However in this well-oiled dominant side, attacker Bobby Firmino gets in for his goal creating.

The Brazilian was simply everywhere for Liverpool in attack, assisting 3 of Liverpool's 4 goals, all with the skill, elegance and guile we have come to expect from the Reds frontman.

The Egyptian King was again banging in the goals with Liverpool charging head-first towards the Premier League title.

4 dribbles, 3 key passes and 2 goals for Salah, the first a lovely dink over the keeper and the second through a mixture of determination and luck.

With Liverpool simply cruising on top of the Premier League, seemingly in a category of their own, riding on the clouds as the teams below battle against each other on Earth, not many would begrudge Liverpool for taking their foot off the gas slightly.

But despite their monumental buffer between them and the rest of the Premier League, Liverpool pulled out another ruthlessly slick performance, demolishing Southampton in a mesmerising 4-0 second half display that exuded a hunger to wrap up the title in style.

This team's unwavering winning mentality has to be credited largely to their talisman on the touchline, Jurgen Klopp has assembled a squad of winners who work cohesively to consistently dismantle their opponents, all while exciting fans across the globe.