The Premier League race is seemingly already run in January, with Liverpool streaking far ahead of the chasing pack following their 0-1 win against Tottenham along with Leicester's 1-2 loss to Southampton.

It was a good week for the Manchester clubs, with both red and blue posting wins with sizeable margins, as well as Everton and Watford who continued their good form with impressive wins.

We here at tribalfootball look at the top performers from Matchday 22 in the Tribal Football Team Of The Week. 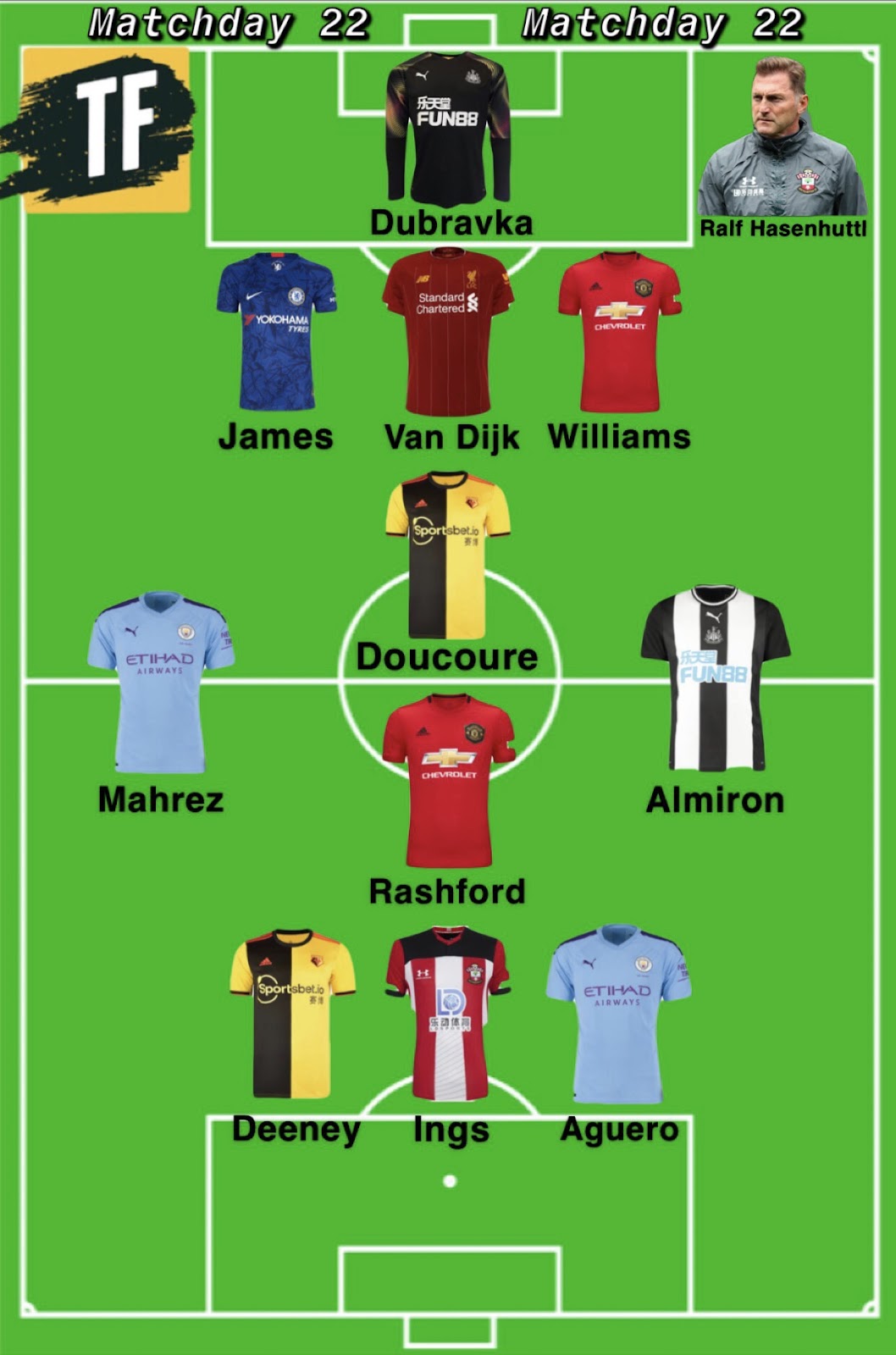 The Slovakian International has been in fine form of late, leading the leagues' saves tally and continually salvaging points for his side.

The Magpies' match away at Wolves was certainly no different, with Dubravka pulling off two world class saves that he had no right to pull off.

The Keepers electric reflexes clearly won his side an important point.

The world's premier defender was solid as ever in his sides 1-0 win against Mourinho's Spurs.

Van Dijk was unmovable in defence, personified by his perfectly time sliding tackle to deny Dele Alli from shooting in the 2nd half.

His defensive prowess was complemented with excellent passing, completing 118 passes at 93.2% accuracy.

This exciting prospect is continually growing in stature with a prolonged run in the first team.

James continually exploited Burnley down the flank, registering 3 key passes and whipping in 10 crosses, one of which the delightful teasing cross that Tammy Abraham netted home with his head.

The teenager might have played his best game in a United shirt with an excellent display in the Red Devils's 4-0 win over Norwich.

Despite missing a golden opportunity on goal, William's performed strongly with 3 tackles and 5 interceptions, along with 3 dribbles in an outing full of verve and energy.

In this Nigel Pearson inspired Watford revival, Abdoulaye Doucoure has proved to be one of the linchpins in the hornets surge up the table.

Doucoure provided another commanding performance in midfield, scoring the games opening goal and subsequently setting up the second for Troy Deeney.

Now that the damn-wall has broken for the Paraguayan, confidence is flowing for Miguel Almiron.

The winger was full of running and heart, completing 5 dribbles and impressively making 5 tackles.

However most importantly, Almiron can't stop hitting the scoresheet, scoring the games opening goal, making it 3 goals in 3 match-days, securing a precious point for his side.

The mercurial winger carved up a helpless Villa side, playing an integral role in the dangerous and dynamic City frontline.

The Algerian scored a brace to open the scoring and then set up Aguero late in the game to cap off an impressive performance.

Marcus Rashford just can't stop scoring goals at the minute, appearing at the forefront of United's 4-0 demolition of Norwich at Old Trafford.

The attacker bagged a brace along with 4 dribbles, taking his goal scoring tally to 14 for the season.

Southampton's superb run of form can be explained by many things, however, most notably by the scoring form of Danny Ings.

The Englishmen was once again an ever present threat to the Leicester goal, with 9 shots, 2 hitting the woodwork and finally scoring the winner to bag all three points for the Saints and taking his season tally to 14.

Watford's inspirational leader Troy Deeney was a top performer for his side. Watford's sudden change in fortunes, much like the saints, has heavily relied upon the form of their talisman.

Deeney was an enormous presence at the Vitality stadium, winning 11 aerial duels and making 4 key passes, along with thumping home the second goal of the match.

After performing so superbly for such a long time, scoring goals on a consistent basis and playing in a team tipped to the brim with wealth and talent, it is easy to forget just how good Sergio Aguero is, and a performance like that on the weekend serves as a good reminder as to just how good he is.

With 7 shots on goal, Kun scored a damaging hattrick in his sides 6-1 win over Villa, as well registering an assist for the first goal of the match.

Merely 3 months ago, the Southampton side stood humiliated in front of a nearly empty St.Mary's Stadium, following a 0-9 discombobulation at the hands of Leicester, the highest ever away defeat in Premier League history.

Then, manager Ralph Hasenhuttl looked defeated, a man without a hope of taking his side up the Premier League table.

However somehow the Saints, led by their manager, have managed to turn the ship around with a string of excellent results, capped emblematically with a win away at Leicester, fielding a side full of stability and attacking prowess. It's certainly been an impressive response by Hassenhuttl and his side.

GOAL OF THE WEEK - RICHARLISON (Everton)

| "Richarlison started it and finished it - in some style!"