It was another frenzied weekend of football in the Premier League, with the fixtures filled with many dramatic results. Some of the contenders flexed their muscles with a romping 8-0 win for Manchester City and a 15th consecutive win for Liverpool.

On the flip side, a changing of the guard seemed to have taken place, with the likes of Leicester and West Ham preying on the frailties of both Tottenham and Man United respectively.

A gutsy performance from a 2-1 down 10-men Arsenal rounded off an exciting weekend of football.

We here at tribalfootball look at the top performers from Matchday 6 in the Tribal Football Team Of The Week. 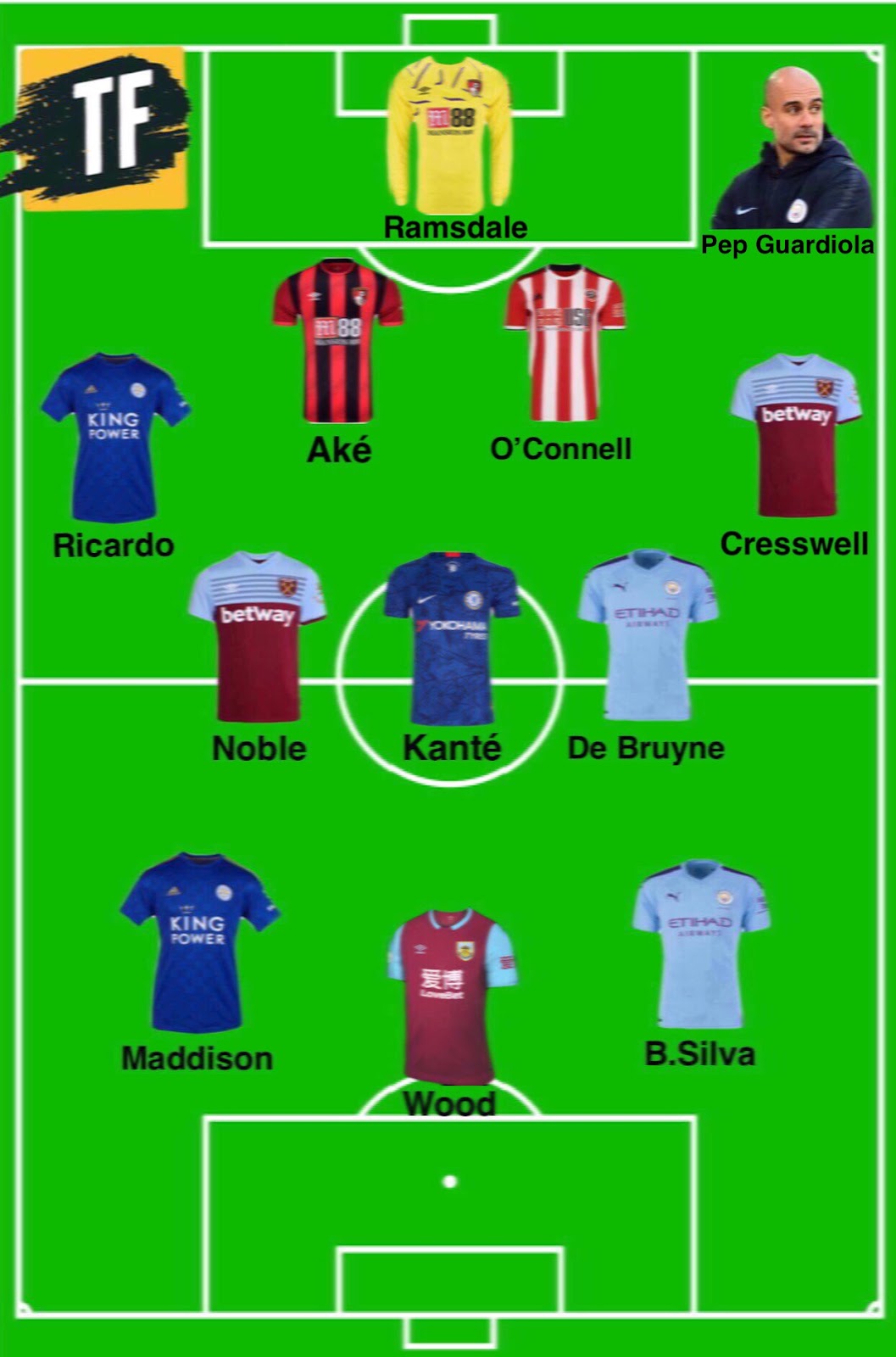 The young goalkeeper again makes it into the team of the week with a strong performance in Bournemouth's 1-3 win away at Southampton.

Ramsdale had to remain alert at all times, with Southampton registering 25 shots on goal for the game. However ,for all their attacking play Southampton could only manage to get one past Ramsdale, from a penalty. In total Ramsdale made 6 saves, showing top reflexes from both close and long range.

To add to his strong performance, Ramsdale registered an assist when he heaved the ball long to Wilson in the final moments of the game, who capitalised on the defensive confusion and iced the match.

After a string of impressive performances, Nathan Ake was again a crucial component in the Cherries purple patch of form.

Defensively strong as always, the Dutchman quelled the influence of Che Adams who only managed one shot on goal, and despite Southampton's barrage on the Bournemouth goal, only conceded one.

However Ake's most significant contribution was up the other end of the field, when in the 9th minute he hurled himself at a corner, heading it firmly into the back of the net, setting the tone for the Cherries early onslaught.

In order to pull off a 'smash and grab' win away in the Premier League, you must have a sturdy defence, and for Sheffield United, this was lead by Jack O'Connell.

Keeping the Toffees goalless despite their 16 shots on goal, the Englishman was completely dominant at the back, making 16 clearances and winning 10 aerial duels.

Coming in for the suspended Arthur Masuaku and up against Man United, you could probably forgive Cresswell for not being at his best, however the England international returned to the London Stadium with a bang.

Continually stunting the attacking play of Pereira and Wan-Bissaka down the wing, Cresswell managed to steal the show with an expertly placed free kick into the top corner, securing all 3 points for the Irons.

It was the Portuguese full-back, charging up and down the right flank who again played a major part in this exciting Leicester side that beat Tottenham at the King Power Stadium.

Monitoring the likes of Son and Danny Rose, Ricardo was important at the back making 5 tackles and 4 clearances.

In the other facet of the game, Ricardo made his run into the box and when the ball came to him, he struck it low and hard into the back of the net, sparking the Leicester turn around.

In the first game back for the Blues, it was always going to be a difficult role for the returning Frenchman up against a Liverpool side gunning for 15 straight wins. But despite the Blues 2-1 loss, Kante was immense in Midfield bossing both aspects of the game.

Kante was constantly quashing Liverpool's attacking play and was consistently damaging on the ball. In the 70th minute, he powered towards the box and beating the Liverpool defence curled the ball expertly past Adrian to give Chelsea a sniff. It was a superb comeback for this vital player.

It is easy to overlook the man who personifies West Ham United due to his consistency in the heart of the Irons midfield. However Mark Noble was unmissable in West Ham's huge 2-0 win over the ailing Manchester United.

With everything going through the skipper, Noble dominated the midfield operating at a pass accuracy of 81.4%. Involved in the build up to the first goal, it was again Noble on one of his driving runs forward who won the free-kick which Cresswell converted.

The football world is quickly running out of superlatives to attach to this surreal footballer and his dazzling club. Kevin De Bruyne was simply unstoppable in City's 8-0 devastation of Watford at the Etihad.

With exquisite imagination, vision and execution, the Belgian midfielder ripped the Hornets to shreds with perfect football. Making 8 key passes, 5 accurate crosses, 4 accurate long balls and 4 dribbles, De Bruyne was everywhere, making 2 gorgeous assists and scoring with a rocket of a right-foot strike.

The pose of De Bruyne with his arms outstretched upon scoring City's 8th is symbolic of a player on top of his game.

With Gareth Southgate eagerly watching on, this exciting young Englishman once again was the jewel in this Leicester side as they beat Spurs 2-1 at home. Maddison let his talent on the ball shine, with 4 successful dribbles and 2 key passes.

It was his superb long range strike in the 85th minute, evading Gazzaniga that put the foxes in front to claim a massive 3 points.

It seems unfair that the entire City frontline isn't included in the team of the week, with Aguero, Mahrez and Silva all playing superb games, however Bernardo Silva in taking home the matchball gets the nod at left-wing.

Silva was damaging with his close control and dangerous dribbling on both wings. In total, Silva registered 2 key passes, 2 dribbles and 5 shots on goal of which he managed to score 3.

The New-Zealand striker took control of the match with two clinical goals to defeat the confident Norwich side.

Winning 4 aerial duels, Wood was dominant in the air, the first of his two goals coming from a header at the near post from a corner.

4 minutes later, he was on the scoresheet again with a first time finish on his left foot from a low McNeil cross. He had a total of 4 shots on goal in an imposing performance.

With a plethora of talent at his disposal, it is easy to forget about the role of the manager to turn this group of superstars into a cohesive unit. Following a surprise loss to Norwich last week, the pressure mounted significantly on the Premier League holders, with a win at home to Watford far from a foregone conclusion, especially with the recent return of Qique Sanchez Flores.

However City's demons were put to bed in the first 18 minutes, when Guardiola's men ruthlessly demolished the Hornets, putting 5 past them in that time. City ran out the game 8-0 winners, reminding the League of their extraordinary abilities.

Very rare will it be that a defender notches the award for substitute of the week, but Chambers role in Arsenal's heroic 3-2 win over Burnley wins him the award. Coming on at half-time to replace the void left by Maitland-Niles' sending off, Chambers was steady in defence.

His moment of stardom however happened at the other end of the pitch, when after a first time cross of his was blocked, he recovered and managed to lift the ball into the back of the net, equalising and dragging the 10-men gunners off the canvas.

N'golo Kante has always been lauded for his defensive prowess, however his goal on the weekend showed exquisite attacking skill and nous. Picking up the ball far from goal, Kante turned and swivelled around, arrowing in towards goal where he glided past defenders on his way.

On the edge of the box, Kante found a gap and managed to dig out a shot with both power and precision, somehow remaining balanced despite the difficult angle.

The impact of VAR to the Premier League is becoming unmissable with two game changing instances across the weekend.

At the King Power Stadium, Serge Aurier hit a powerful volley into the back of the net, taking Spurs 2-0 with all 3 points in hand. This lasted until the goal was chalked off, with Son offside by a matter of centimetres in the build up to the goal. Moments later Leicester were down the other end to equalise, building the platform of momentum that they rode home to become 2-1 victors.

It was a similar case for Chelsea, when Azpilicueta scored to equalise the game at 1-1. The goal was also given offside to which Liverpool took full advantage of, going down the other end and extending their lead to 2-0.