Coming into the international break, the Premier League set up a mouth-watering set of fixtures that did not disappoint.

Sheffield United held Tottenham away to move up to 5th, the ever enjoyable Leicester beat Arsenal to move into 2nd spot, and the piece de resistance, Manchester City vs Liverpool, threw up a cracking match with the reds moving 8 points clear at the top of the table.

Fueled with great goals, controversy and excellent individual displays, We here at tribalfootball look at the top performers from Matchday 12 in the Tribal Football Team Of The Week. 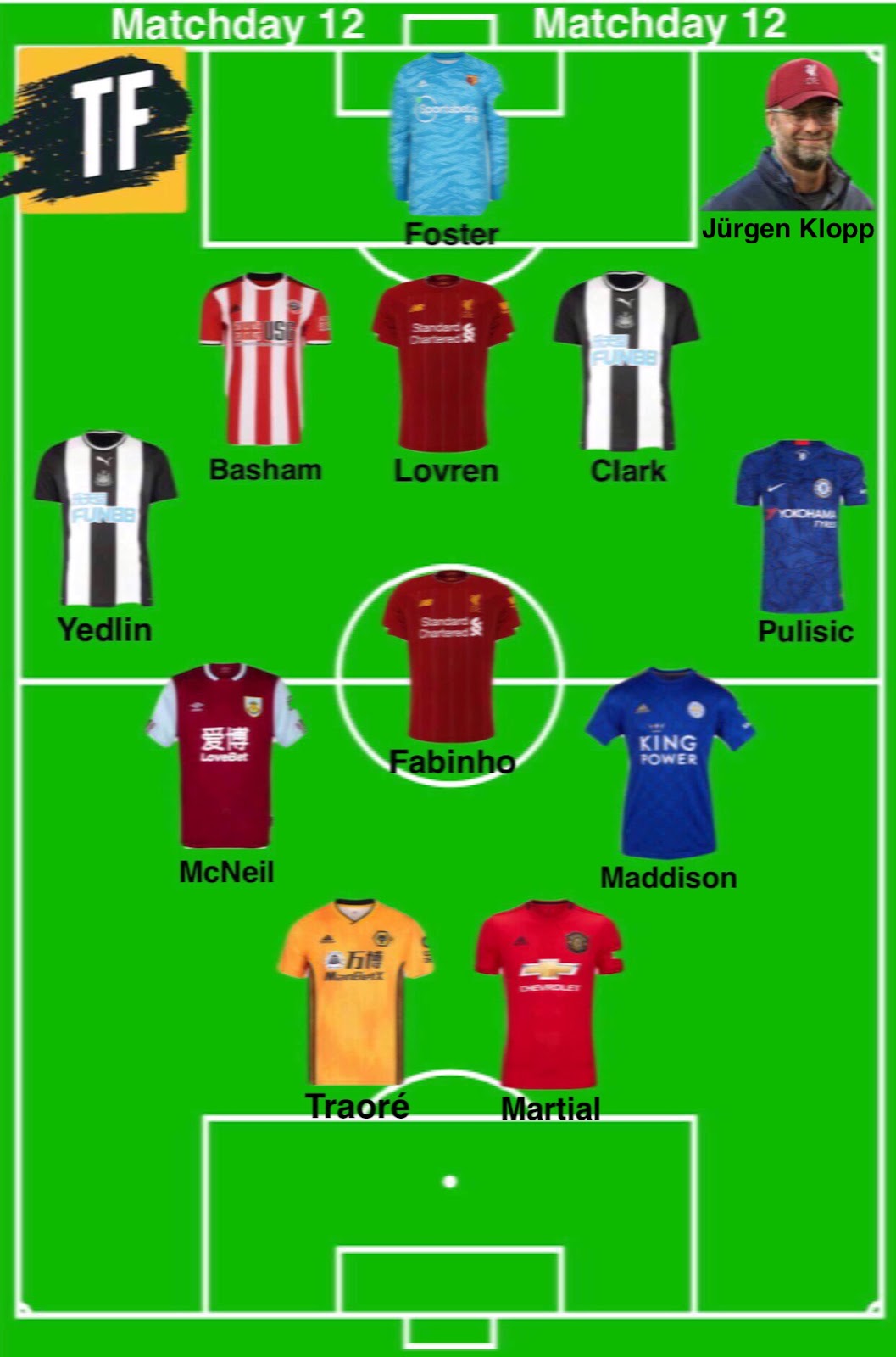 The Watford glovemen was back at it again between the sticks, providing a series of top stops taking his team along way towards a crucial 3 points at Carrow Road.

In total, Foster made 5 saves, showing superb reflexes and technique to make it in the side for back to back weeks.

With question marks again over the Croatian's defensive abilities after the impressive start of Joel Matip, many pointed to Lovren as a potential hole in Liverpool's armour for Manchester City to exploit.

However Lovren was rock solid in defence alongside Van Dijk, keeping Man City relatively impotent in front of goal despite their possession stats. Lovren in total made 5 clearances, 2 impressive blocks and won 2 aerial duels.

In a crucial game for Sheffield United against a struggling Tottenham outfit, Chris Basham stood tall in the typically robust Blades defence.

Keeping Harry Kane to no shots on target, Basham made 6 clearances and 2 tackles in the Blades important point that sees them rise to 5th place.

It's been an eventful few weeks for the Irish defender, who in the space of a couple of games has found himself out of favour to leading the club's goalscoring charts.

The defender was solid as always in the Newcastle back three and had to step up when skipper Jamaal Lascelles came off injured.

Keeping Wilson and King to zero shots on target, Clark won 4 aerial duels, made 6 clearances and was alert enough to feather a shot goalwards to put the magpies in the lead.

The American speedster was blitzing up and down the ground in a blistering performance in Newcastle's gutsy 2-1 win at St James Park.

Yedlin with his elite speed and endurance was strong in both aspects of the game always providing support for Almiron in attack and tracking back to help out in defence.

His headline moment came in the 42nd minute when he threw himself at a Saint-Maximin cross to head the Toon back to 1-1.

The in-form American has been propelled into a run of goals, spurred on from the confidence from his hat trick against Burnley.

In an attack stunted by a stern Crystal Palace defence, Pulisic seemed the most likely with his tricky dribbling in and around the box.

His eye for goal again was on show when he followed up with a header to seal the game, making it 5 goals in 3 games for Pulisic who has rocketed to the top of the PL form charts.

In Liverpool's colossal win over title-holders Man City, the Brazilian produced a commanding performance in the heart of the Red's midfield.

Producing a typically solid performance with assets in attack and defence, Fabinho lit up the game with one of the goals of the season when he smashed the ball true from 30 yards, sending the Kop into hysteria.

The electric midfielder continues to shine bright within this pulsating Leicester side that made their way up to 2nd position on the weekend.

Providing much of the attacking impetus on a rainy day, Maddison was key to the Leicester win, with 4 shots on goal, 3 key passes and a magnificent strike from outside the box to tie up the 3 points.

McNeil's quality with the ball at his foot was certainly on show in Burnley's 3-0 win over West Ham.

Whipping in numerous delightful balls into the box, McNeil registered 6 dribbles, 4 key passes, was responsible for the corner that opened the scoring for Burnley, notched up 1 assist and should have had another if not for a VAR offside.

The Wolves powerful winger was an unstoppable force at the Molineux with Aston Villa having no answers for his repeated threats.

Constantly creating chances for his side, Traore had a colossal 11 dribbles, registered an assist and nearly scored himself smashing his shot onto the crossbar.

Following United's disappointing loss away at Bournemouth, the Red Devil attackers were back to their usual attacking prowess at Old Trafford, led by Anthony Martial.

The French goal sneak produced a damaging performance, with 4 key passes and 2 assists.

Despite all the various sub-plots around the league this weekend, the Premier League narrative was rightfully centered on the heavy-weight battle between the league's two big hitters, Liverpool and City.

Liverpool, with the pressure of defeat immense, pulled out a ruthless performance with a clinical edge that saw the Reds bag 3 goals with as many shots on target. Although their win may have been expected with Liverpool's home form superb, Klopp must be giving praise for producing a side that every week looks more and more like a Premier League winning side.

After beating their biggest threat for the cup, Liverpool have moved 8 points clear at the top, and even in November, it looks to be an ominous lead.

GOAL OF THE WEEK - FABINHO (Liverpool)

Fabinho with a rocket of a goal for Liverpool against Man City #LIVMCIpic.twitter.com/LypqdWMK6l — World Football Index (@WorldFootballi) November 10, 2019