Back from what was an eventful international break, Premier League football resumed from where it left off with a round filled with great goals, drama and surprise results.

Aston Villa and Leicester pulled off rescue missions, both coming from behind to claim all 3 points and Arsenal fell to an imposing Sheffield side buoyed by the electric Bramall Lane home support.

We here at tribalfootballlook at the top performers from Matchday 9 in the Tribal Football Team Of The Week. 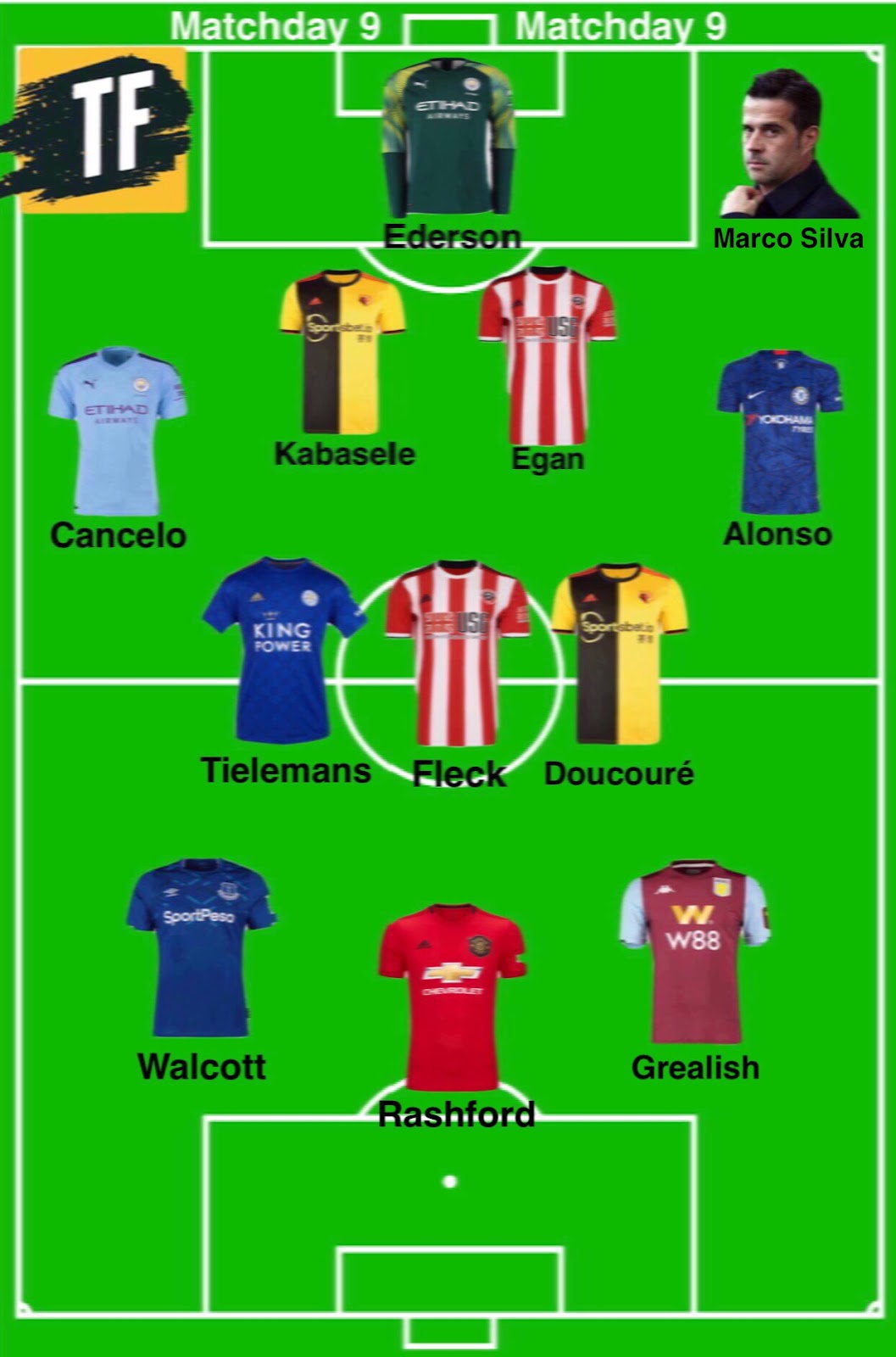 Again the City goalkeeper proved why this successful side isn't built solely upon their glamorous attacking ingenuity. When called into the action away at Selhurst Park, the Brazilian was sharp to immobilise the Palace goal-threat.

In the 2nd half, Ederson made two crucial saves, the first from a bullet Benteke header at close range, and the second from a rocket Zaha shot, both requiring fast reflexes and strong hands.

It was a well deserved fourth clean sheet for the City glovemen.

A historic win for Sheffield United at home to Arsenal once again boasted a consistent and sturdy defence. John Egan has been at the heart of this defence all season and again was at his robust best at Bramall Lane.

He reduced the likes of Pierre Emerick-Aubameyang and Alexandre Lacazette to a solitary shot (off-target) at goal. He also made 7 clearances, 3 interceptions and won 5 aerial duels in his side's clean sheet.

The Belgium international has had somewhat of an up and down start to the season, finding himself in and out of the side, however he what at his best in his sides 1-1 draw with Tottenham.

Within the sturdy back-three, Kabasele was dominant with a massive 15 clearances and 5 tackles, rendering the Spurs frontline toothless.

The Spaniard, faced with the vicious boos and jeers from the travelling fans, stood tallest with a commanding display at Left-Back. With Newcastle sitting deep and defending in numbers, it would take patience and creativity for the Blues to snatch a winner.

Alonso continually bombed down the left flank, linking up damagingly with Callum Hudson-Odoi.

Most significantly In the 73rd minute, the ball came out to Alonso on the edge of the box, where he drilled his shot low and fast past Dubravka, breaking the deadlock and gifting his side a cherished 3 points.

City's new fullback produced a strong all-round performance in his side 0-2 win away at Selhurst Park.

Operating at a pass accuracy of 90.3%, Cancelo was particularly damaging making 4 key passes, the most of any player on the park.

Silencing the likes of Schlupp and Van Aanholt in defence, Cancelo was steadfast making 3 tackles and 3 clearances.

The Scotsman was at the bubbling heart of the energetic Blades midfield, emerging as the driving force in his sides impressive 1-0 victory.

Operating at a pass accuracy of 82.4%, Fleck had 2 shots on goal, made 3 key passes, 6 crosses as well as completing 28 passes in the opposition half.

It was a man of the match performance full of verve that brought Bramall Lane to its feet.

The Frenchman was crucial in the Watford side that held Tottenham to a 1-1 draw away from home.

Alongside an impressive Chalobah and Cleverly, Doucoure was back to his aggressive best, driving the team forward with menacing counter-attacks. Doucoure was ruthless in midfield, winning the ball back for his side a game-high 12 times.

His impressive performance was headlined in the 6th minute, when after driving forward he got on the end of a ball in the box, cooly putting the Hornets 0-1 up.

The young exciting Belgium international once again lit up the pitch with his midfield craft in Leicester's hard-fought 2-1 victory over Burnley. Tielemans made things happen, registering 3 key passes and 2 dribbles as well as being a constant threat upon the Burnley goal with 3 shots.

His headline moment however came in the 74th minute when he was perfectly placed to smash home the winner and retain the Foxes' spot in the top 4.

It has become a regular occurrence where Grealish's attacking prowess is the focal point of this Aston Villa side. Once again Grealish's talent was the highlight of the Villains come-from-behind win against Brighton.

Grealish was unstoppable, having 3 shots on goal, making 6 key passes, 5 dribbles and of course being fouled 6 times, all while operating at a pass accuracy of 84.1%.

These stats were capped off with a goal in first-half stoppage time, as well as the assist for Matt Targett to claim all 3 points at Villa Park.

The pacey Englishman was a constant threat down the Right-Wing for the Toffees, Playing with directness and skill. Walcott set up the first goal of the game when he played through Bernard who scored after dancing past the West Ham defence.

Walcott was unlucky to find his name on the scoresheet, registering 7 shots on goal, including a smashing volley which thundered against the crossbar.

The recently questioned United frontman answered his critics when the Red Devils became the first side to prevent Liverpool from claiming maximum points.

Rashford was creative on the ball, driving forward and completing 4 dribbles. He also showed his clinical edge, when in the 36th minute, he brilliantly got away from Matip and poked home James' dangerous cross to put the home team 1-0 in front.

Everton have been the frustration of the 2019/20 season, where after spending many millions on flashy new signings, so far appear far off from their desired ambitions of forcing their way into the top 6.

Coming off 4 defeats in a row, manager Marco Silva was under increasing pressure to start getting results. The Everton boss made some big personnel changes, dropping the likes of Gylfi Sigurdsson for what he labeled a "must win game".

These moves certainly paid off with Everton walking out to produce their best performance of the season. Goals from Bernard and substitute Gylfi Sigurdsson ensured three points for a side re-invigorated with a new found creativity.

Despite the pain of being dropped following a spell of underwhelming form, the Icelander wasn't going to drop his head, showcasing his talent in his brief spell on the pitch.

Coming on in the 86th minute, Sigurdsson threw himself immediately into the action scoring one of the goals of the round to secure all 3 points for the toffees.