Chelsea top brass are failing Tuchel: Why they should learn from Barcelona

With the matches coming thick and fast, the drama certainly hasn't subsided in the pulsating Premier League.

Liverpool and City managed to scrape hard-fought wins, Leicester and Spurs returned to winning ways, while United fell to a robust Burnley outfit.

A David Luiz red-card, a Henderson saved penalty and a remarkable last minute comeback at Goodison Park round out a stirring week of Premier League football.

We here at tribalfootball look at the top performers from Matchday 24 in the Tribal Football Team Of The MidWeek. 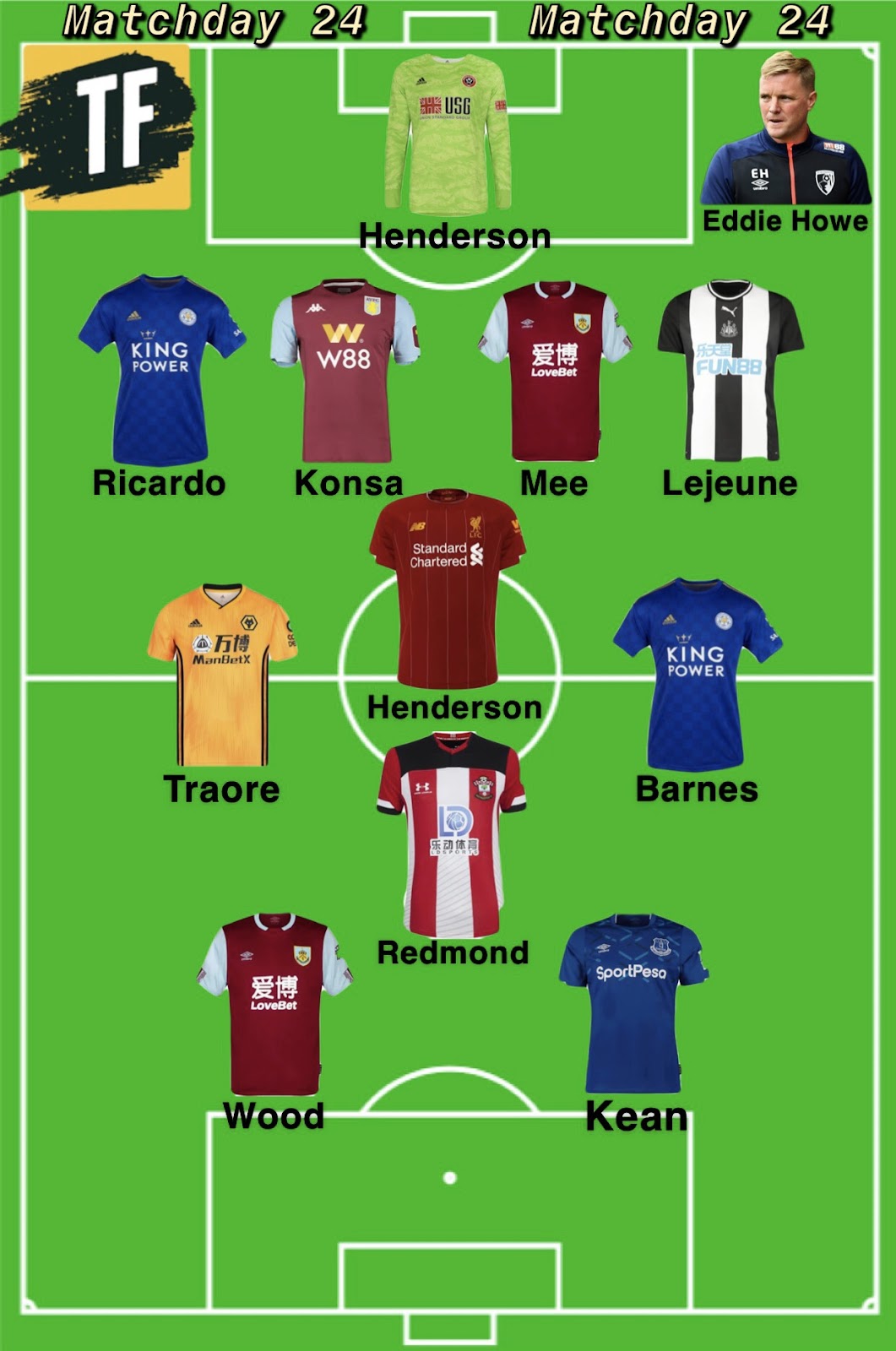 Despite the ultimately disappointing result for the Blades, Henderson between the sticks pulled out another impressive performance.

In total Henderson made 4 outstanding saves, one of which a save that denied Gabriel Jesus from the penalty spot, well and truly keeping his side in the match.

Despite only being on the pitch for under half an hour, the Frenchman made himself a hero with 2 goals deep into stoppage time to somehow salvage a point for the walking wounded Newcastle United.

Lejuene scored spectacularly with an overhead kick when the result seem beyond the magpies, and then managed to find himself on the end of another under a minute later.

The Burnley backman was solid as ever keeping a dangerous United side goalless.

Mee made 9 clearances and won 6 aerial duels, but also contributed the other way with 2 key passes and the assist for Chris Wood's opener.

In what was a huge win for the Villains, Ezri Konsa along with messrs Mings and Hause put in a strong defensive performance.

Konsa won 7 aerial duels, made 2 tackles and despite Tyrone Mings finding his name on the scoresheet, was truly responsible for the winner with a glorious strike from the edge of the box.

Ricardo was back to his potent best in Leicester's demolition of West Ham at the King Power Stadium.

The Portuguese Full-Back created the first goal, putting the ball on a platter for Barnes to tap into the back of the net, and scored the second with a thunderbolt strike from the top of the box.

A true all round performance with a goal, an assist, 3 key passes and 5 tackles.

The Liverpool captain was at the centre of everything good that the Reds created in their narrow win over Wolves at Molineux.

Henderson scored the opening goal of the game with a near post header from a corner and made the assist for Firmino to fire home all three points for the Reds.

Harvey Barnes produced a damaging performance off the Left-Wing, as Leicester got back to winning ways.

The Englishmen scored the opener and set up the second goal for Ricardo, totalling 4 key passes and 2 successful dribbles.

The reliable Redmond put in a super performance, driving his side towards another impressive victory as the Saints soar up the table.

Redmond scored a beautiful goal to open the scoring, showing a mix of dribbling ability and a striking masterclass. He also set up the second for Stuart Armstrong to wrap up the 3 points.

The winger ended the day with 4 key passes and 5 successful dribbles.

Traore has been in superb form of late and was at his terrorizing best once again, making Liverpool awfully nervous for their perfect record.

Traore was a threat all evening up forward completing 6 dribbles, having 2 shots on goal, registering 2 key passes and getting the assist with a lovely cross for Raul Jiminez to equalise.

The Burnley front-man was clinical as ever in Burnley's huge away win against Manchester United.

Wood scored the opening goal with a sharp finish around his body and got the assist for Jay Rodriguez's belter. He remained an aerial presence all day winning 5 aerial duels.

The 19-year-old finally got off the mark in the Premier League as he starts to grow in confidence under Carlo Ancelotti.

The Italian looked dangerous in front of goal, registering 3 shots on target, one of which opened the scoring for the Toffees.

Despite the bizarre end result, Everton fans look like they have a lot to look forward to.

In recent weeks the Vitality Stadium has steadily turned into a crucible, with the pressure mounting increasingly upon the head of the much-loved Eddie Howe. With 5 losses and a draw in the last 6 games, the fixture against Brighton during the week shaped as a do-or-die clash with another loss having the potential to send them into the doldrums of the relegation scrap.

However Howe's Cherries put in a strong performance, aided by the sharp glovework of Aaron Ramsdale. Howe's side, who had only managed one goal in their last 6 games, sent 3 into the back of the net earning the side a much needed 3 points.

The Cherries certainly aren't out of danger, but this win certainly starts to turn the ship back in the right direction.