Newcastle United's recent takeover has led to a whirlwind of transfer speculation. A variety of star names have been linked, including Philippe Coutinho and Gareth Bale. But the reality is that the club is in for a longer-term rebuilding project. Right now, the first priority is to get out of the Premier League's relegation zone.

While there remains uncertainty over who will manage the club in the coming months, with Steve Bruce under serious pressure, it is possible to foresee how Newcastle will play in the next one or two years as they attempt to climb the league. Here we'll assess their tactics and positions to be filled, then recommend five realistic transfer targets.

STYLE OF PLAY AND KEY POSITIONS

Since returning to the Premier League in 2017, Newcastle have stuck by a cautious, defence-first style of play. This was established by Rafa Benitez, and continued by Steve Bruce. They are a counter-attacking side whose attacking is often built around quick, creative individuals who can lift the crowd and make something from nothing. Allan Saint-Maximin is a good example of this right now.

It's unlikely that, with the current squad as it is, they can completely alter their tactics. So while the 3-4-3 and 3-5-2 may be finished as primary formations, the basic approach should stay the same. To make a gradual transformation, Newcastle must first embrace their situation and style of play, then try to get better at it.

A full squad rebuild in one or two transfer windows is not only unlikely, but probably wouldn't work. Newcastle need to improve certain positions, step by step, and become a more effective counter-attacking side. That means being strong defensively, and clinical on the breakaway. With this in mind, the key areas to improve in January are: central defence, right-back and central midfield. It would also be wise to sign another attacker or two to take pressure off of Saint-Maximin.

Newcastle have been linked with Burnley's James Tarkowski recently, and the rumour makes a lot of sense. Tarkowski is a strong, aerially dominant centre-back who defends his box well. However, he's also on the verge of turning 29 years old, and lacks mobility. He's the type of centre-back that Newcastle may out-grow by this time next year, which wouldn't be a good way to start a rebuild.

Konsa represents a more astute target. At 23, he is now in his third season of Premier League football with Aston Villa. He has been name-dropped in the past by Gareth Southgate as a potential call-up for England. Like Tarkowski, he's a good penalty box defender who is strong, sufficient in the air, and committed when blocking shots. He is, however, quicker than the Burnley man, and has played in different defensive systems. 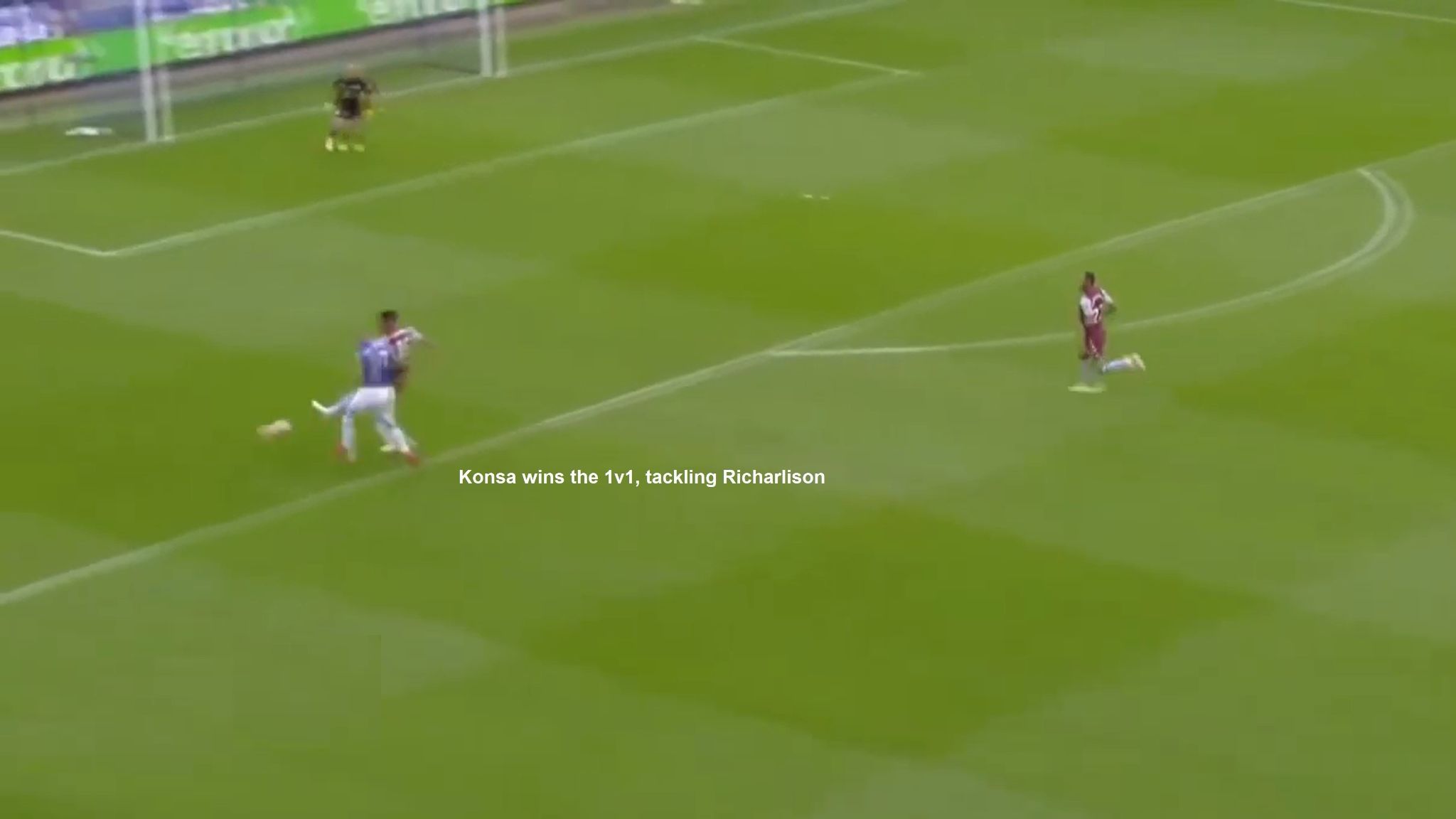 Tackle/Dribbled Past percentage shows how many times a player won a tackle compared to the number of times he was dribbled past. It can be used to help measure how effective a defender is in duels. Last season, Konsa was successful in these situations 86.2% of the time. He is a good tackler, reads the game well, and gets in the way of shots. For a counter-attacking side like Newcastle, he could be perfect.

If Newcastle are to go for a slightly more adventurous system, incorporate another midfielder or forward and go from a 3-4-3 a counter-attacking 4-3-3 or 4-4-2, they will need to improve the full-back positions so the centre-backs get more protection. Mukiele, currently plying his trade in Germany with RB Leipzig, could be the solution to this problem area.

Standing at 6ft 2in, he is strong 1v1 on the ground and in the air. He was linked with Manchester United a few months ago, and is a similar type of right-back to Aaron Wan-Bissaka in that both are good defenders first and foremost. Mukiele can get forward too though, and obtained respectable numbers for cross accuracy (23.4%) and dribble success (56.5%) last term.

Capped by France for the first time in September, the 23-year-old is one of the most exciting young full-backs in Europe. However, as he is more defensive-minded, he probably isn't going to be on the radar of every top European club. The likes of Manchester City and Paris Saint-Germain want full-backs who essentially behave like wingers. Newcastle, on the other hand, would benefit greatly from his defensive solidity.

In an ideal world, Newcastle would be looking to sign multiple midfielders simply to address the lack of depth in the position. Joe Willock offers good energy and attacking threat with his runs into the box, but there aren't many players who can be relied upon to dictate the tempo or win the ball back. Now a regular member of the France squad, Tchouameni would be a statement signing, but he would also be a sensible one.

There isn't a lot that the 21-year-old can't do. He's strong in the tackle and quick to recover, which explains why he ranked among Ligue 1's top players for tackles and interceptions last season. However, he also possesses a superb touch, the ability to escape pressure with a turn or dribble, and clean passing off either foot. 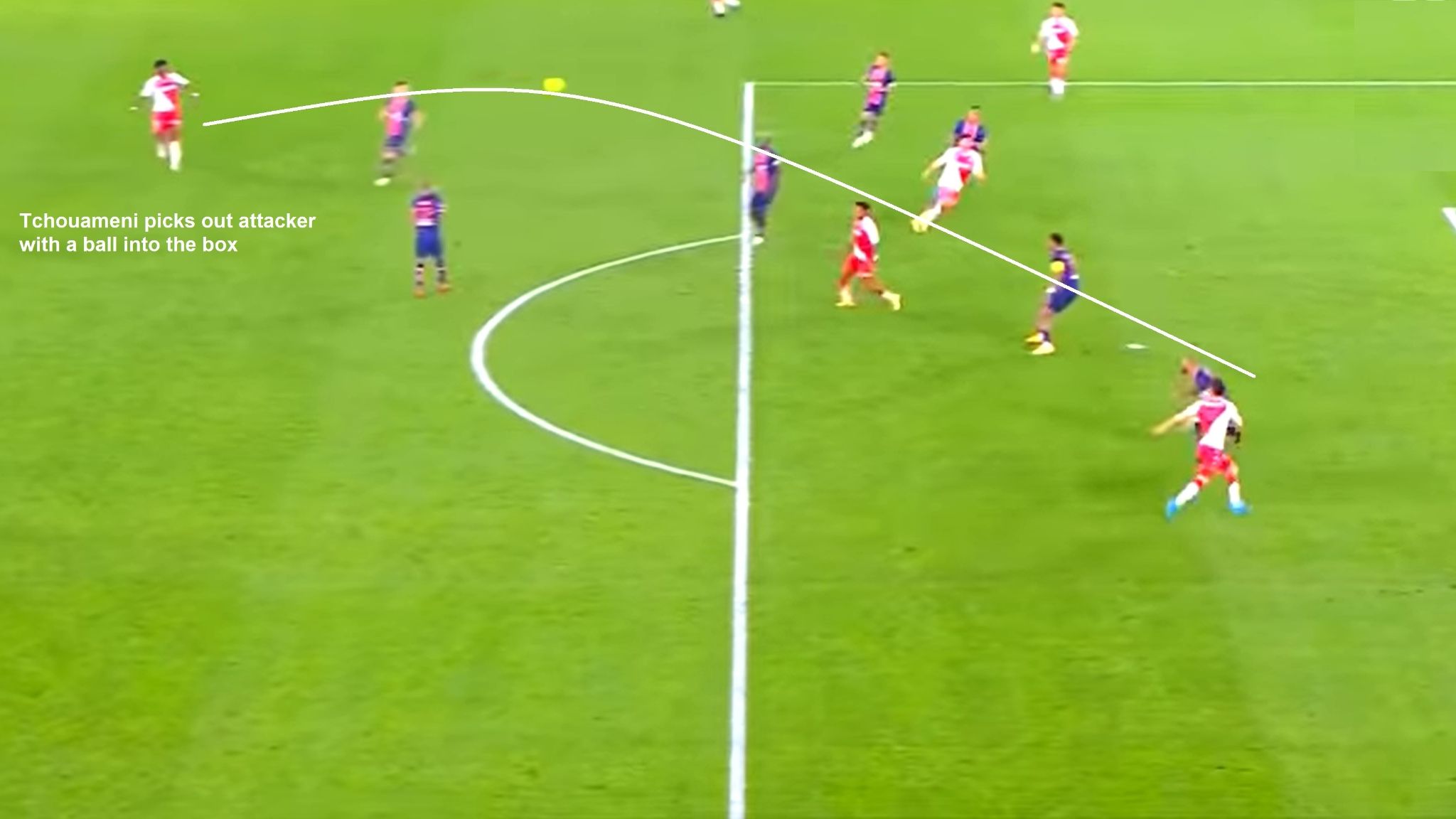 Newcastle could sign a number of midfielders to fill various holes, or they could sign one player capable of doing a bit of everything. Tchouameni could be that player, breaking things up before releasing the attackers on fast breakaways with pinpoint passes.

In Saint-Maximin, Newcastle have one of the trickiest wingers in the Premier League already on their books. Sarr isn't too far behind him, however. Averaging 2.6 dribbles and 2.4 shots this term, the Senegalese wide man is one of the league's most potent forwards. Currently he plays on the right-hand side for Watford, and that's the role he could fulfil for Newcastle.

Sarr has an explosive change of pace, which makes him a real problem for opponents 1v1 and in transition. He is also developing as a finisher, as evidenced by his run to the far post and headed goal against Newcastle in the 1-1 draw in September. His movement in the penalty box suggests he could one day be the type of winger to score double figures each season – indeed he already has four to his name in 2021/22.

Newcastle have other quick wingers, like Miguel Almiron, but none have the end product that Sarr offers. And, at 23, he has plenty of room for growth. He'd fit the policy of buying for the longer-term, while bringing the quality and league know-how to settle in right away.

Like Tchouameni, Nunez would be an expensive addition. He is highly rated at Benfica, is enjoying good form, and has been linked to some of Europe's top clubs including Barcelona and Manchester City. In the summer, Brighton reportedly tried and failed to sign the Uruguay international. But if Newcastle are looking for a forward to bolster their counter-attacking threat, they need look no further.

Nunez is a powerful striker, quick and strong, and is increasingly efficient in the box. He's difficult to stop once he gets going, which is why he completed 51% of his dribbles last season. Hard-working and with excellent movement to get in behind, he can also link play and bring teammates into the attack.

At 22 years old, Nunez is still developing, and he has the potential to be a serious force. He's 6ft 2in tall, fast, and can wear a number of different hats up front – dropping deep, running behind, dribbling in from wide, shooting or laying off, or attacking balls into the box. Whether it's alongside or instead of Callum Wilson, he would fit right into Newcastle's prospective counter-attacking 4-3-3 system.

All data courtesy of WhoScored.com.