Talking tactics: Why underrated Dyche safe and can guide Burnley to safety

Burnley have made their worst ever start to a Premier League season, amassing just two points from their first seven games to leave Sean Dyche's side languishing in the bottom three. And the stats get worse: they are yet to win a game and are on a run of four without a goal. Clubs have avoided relegation following a start as bad as this, but the vast majority have failed to turn it around.

Dyche will, of course, be given time to improve Burnley's results. He has been at the club since 2012, overseeing a relegation and instant promotion in that time, but while momentum was building internally during that period the situation is completely different now. Relegation would surely signal the end of this era.

But time is on Dyche's side, and there is every possibility he will steer them away from trouble over the coming months. Here, we take a look at what has gone wrong in 2020/21:

Burnley's chance creation issues are more eye-catching, but let's start with how things are going at the back; Dyche depends on a solid foundation, and without it the Clarets won't improve.

Ben Mee missed the first six games of the season through injury, and clearly that has had a big impact on their ability to defend well. Coupled with James Tarkowski being distracted by links with West Ham United, who were bidding for the Burnley centre-back right up until deadline day, this has destabilised a usually solid back four.

In a 4-4-2, Dyche's tactics aren't as defensive or negative as people often assume. His midblock, aggressive pressure in the central third of the pitch, and targeting of the flanks with counter-attacks is similar to what Diego Simeone does at Atletico Madrid. It certainly isn't possession based, but it isn't parking the bus, either.

And that's why issues in central defence have so quickly led to defensive insecurity. Burnley aren't playing with their backs against the wall and don't like to be camped in their own half, which means spaces can easily appear without an established centre-back partnership organising things. 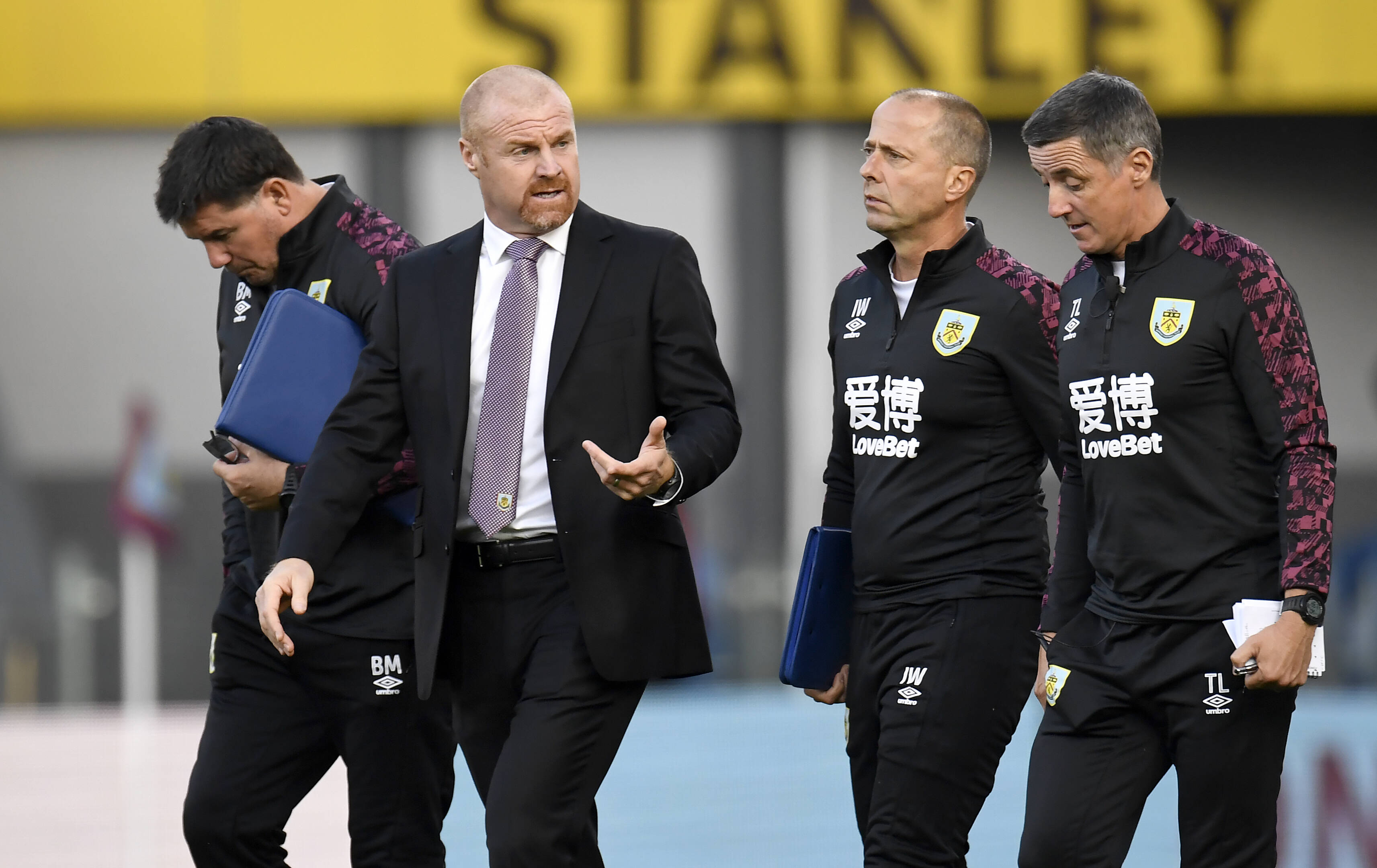 Burnley have gone 420 minutes of Premier League football without a goal, a problem that stems from an imbalance through the midfield four that is severely limiting their creative output. According to The Athletic, Burnley are creating 0.85 'big chances' per game in 2020/21, down from 2.1 last season, while their xG from shots on target has reduced from 1.01 to 0.44 and their xG from open play down from 0.73 to 0.47.

The main issue appears to be leaning too heavily on Dwight McNeil on the left, with opponents far more likely to double up on the winger this season. McNeil, who often simply gets fouled before he can build up pace, isn't able to drag Burnley up the pitch in the same way.

They need to restore balance by adding forward momentum on the right. The side looks better with Johann Berg Gudmundsson on that side, but he is often out injured, meaning Josh Brownhill or Robbie Brady filling in. Neither are natural right-sided players, putting more pressure on McNeil to create – and therefore increasing opposition focus on the left winger.

There is also a problem developing with having two similar players up font in Ashley Barnes and Chris Wood. Neither are prolific goalscorers and both prefer to hold up the ball, win flick-ons, and receive longer passes. This is beginning to make Burnley one-dimensional, because rarely is there an option to slip a runner in behind.

TURNING POINT ON THE HORIZON

Dyche has begun to address these issues, most notably in the 3-0 defeat to Chelsea, when after a poor first half he switched to a 4-5-1 formation that gave Burnley more control of central midfield. Perhaps they should deploy this system with more regularity, not least to shake things up and keep opponents guessing; Dyche's 4-4-2 has been consistent for too long, providing managers with plenty of match data to pour over in preparation.

Then again, Burnley looked more like their old selves in the 1-0 defeat to Tottenham earlier this month, in which a late Harry Kane goal spoilt what could have been a very impressive point for Dyche's side. Similarly the draw with West Brom was more in keeping with the Burnley we have become accustomed to in recent years, while the 0-0 with Brighton a fortnight ago was a performance of defensive resolve.

Burnley will take encouragement from that, even though they were out-shot 19 to four by Graham Potter's side, because it was the first time this season Mee and Tarkowski have started together. Suddenly the Clarets were defending well again, conceding primarily long-range shots and successfully blocking the majority of these.

And with new owners on the horizon, it is vital Burnley start picking up points soon. Dyche is said to be central to the plans of both interested parties, per The Telegraph, and while it is unclear how much money would be invested in new recruits Dyche is the right man to bring in higher quality players. His football isn't just hoofing long balls, and Burnley are more flexible and proactive than many assume. If they can get through this sticky patch, Dyche can lead them into a wealthier future.

Eight games is a small sample size. Perhaps all that was really missing was their loyal servant Mee to command the back line. Certainly Burnley supporters can take heart from their recent outings, and although scoring remains an alarming issue Burnley were never big goalscorers. As soon as Woods or Barnes find a spell of form, Burnley should shoot up the table.