Talking Tactics: Why Solskjaer can't lead Man Utd back to the top of English football

For the second successive week Manchester United performed badly against a bottom-half Premier League club, and although fatigue is certainly a factor in their worrying start to the season – the one before only ended six weeks ago – this is a tactical issue as much as anything else.

Events over the past week appear to have proven, once and for all, that Ole Gunnar Solskjaer will not take United back to the top of English football.

The most important dividing line in modern football is structured possession and the 'automatisms' of attacking lines. There are managers who drill set patterns of play until they are muscle memory, and those who still expect their players to freely improvise – and only the former can rack up the 90+ points needed to win a Premier League title. Solskjaer is very much in the latter camp, as the fortunate 3-2 victory over Brighton and the 3-1 defeat to Crystal Palace have shown.

The likes of Jurgen Klopp, Pep Guardiola, and Antonio Conte – the winners of each the last four titles – coach positional play in excruciating detail, teaching their players precisely where to stand and when to move in all areas of the pitch.

This means they are in a good position when they lose the ball (spread out evenly, ready to stamp out an opposition counter-attack) and can prise apart the defence. Modern football is more territorial than ever before; the elite clubs, forced to hold 60%+ possession, need their attacks to be structured three or four steps ahead to outmanoeuvre a stubborn low block.

Solskjaer's United do not do these things, which is why their players only look comfortable when given space to charge into on the break – see Marcus Rashford's goal against Brighton – and appear sluggish and out of ideas when faced with a deep blockade, as against Crystal Palace. When confidence is high, the talented creators like Bruno Fernandes and Paul Pogba will make things happen, but as soon as they are in a slump, United do not have the coaching to think further ahead than the next pass, and the next movement. That is why they look so flat, and so directionless, for long periods under Solskjaer. 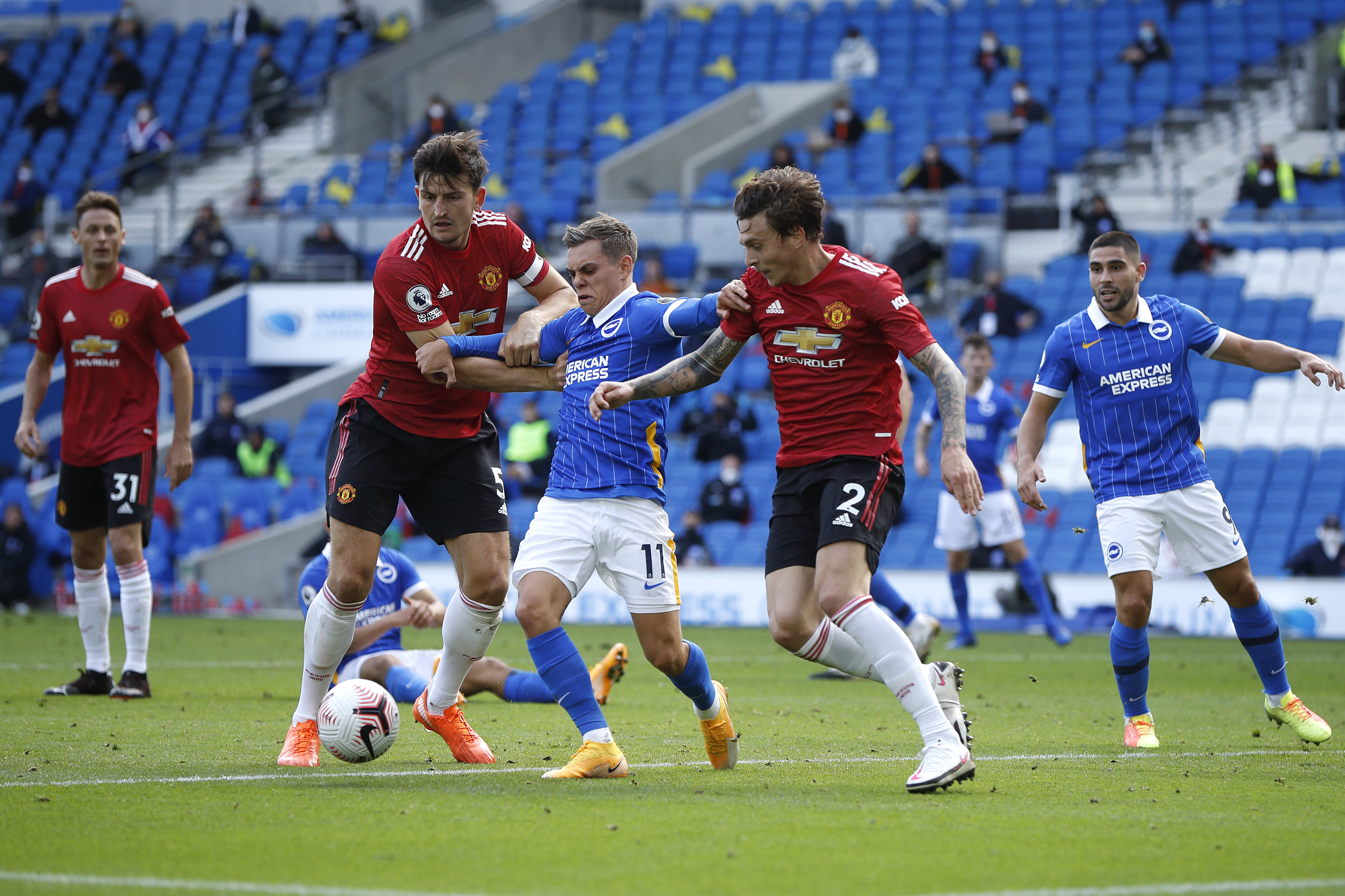 Leandro Trossard (centre) was a constant threat to United's defence

Against Brighton, the absence of any tactical direction from the dugout went even further. Brighton had clearly targeted the wide areas with their 3-4-3, bunching up on the right before suddenly switching the play to left-back Solly March. Solskjaer ought to have noticed this and reacted, but instead he was given space over and over again – eventually scoring a 93rd minute equaliser.

In the first half, Leandro Trossard twice hit the post with shots from outside the area, a key feature of the game thanks to the lack of compression between the United lines of defence and midfield. They are not working in sync, but instead freely organising themselves, getting caught on the counter-attack by both Palace and Brighton and, worse still, getting out-witted by simple passing moves through central midfield.

The defensive side of things may be partially solved by new signings and improved fitness. After all, the way Harry Maguire was pulled wide and isolated by Crystal Palace's counter-attacks was a rare sight, and probably had something to do with his personal issues at the moment, while replacing Victor Lindelof would help United defend one-on-ones.

But in attack, even adding Jadon Sancho won't make United contenders. They have mustered a meagre seven shots on target so far this season, the joint-third least in the division, and have lost the xG battle in both of their league games. You can add as much flair as you want on the wings, but with Solskjaer unable to coach specific patterns, there is a limit to how effectively they can turn possession into goals.

The only meaningful attack United mustered against Brighton, aside from the two set-piece goals, was a counter-attack led and scored by Rashford. Those sorts of situations are very unusual for United unless facing a 'Big Six' side willing to let Solksjaer's side sit deeper and play on the break; Brighton are one of the few possession-focused teams they will play, and yet even in this game United only managed an xG of 1.58.

What's worse for Solskjaer compared with Frank Lampard, for example, another manager unable to coach intricate tactical patterns in possession, is that his squad is not well-suited to individual invention. Paul Pogba tends to play within the tempo of a game, rather than set or raise it, while Anthony Martial and Rashford only tend to excel if space is created for them. Fernandes, then, is left with an awful lot of the creative burden, particularly while neither Luke Shaw nor Aaron Wan-Bissaka are capable of being particularly dangerous on the overlap.

None of this is especially new. And that is precisely the problem. With Solskjaer in charge, United will always be like this: a flurry of positive results thanks to their coach's good man-management, followed by a flurry of bad ones when confidence drains and there is no tactical foundation to rely upon. It is as true today as it was 12 months ago. No matter how much money they spend, United's fortunes will not change until they get rid of Solskjaer and hire a modern tactician.