Chelsea are ready to challenge for the Premier League title for the first time since Antonio Conte arrived at Stamford Bridge in 2016. It has taken nearly a third of the 2020/21 campaign to be able to assert this with conviction, but after an impressive 3-1 win over Leeds United temporarily lifted Frank Lampard's side to the summit the remaining doubts dissolved.

Kante was unbelievable against Leeds, commanding central midfield all on his own and somehow keeping every Leeds runner quiet. Marcelo Bielsa's team poured through the middle in numbers on the break, as they always do, but Kante was there to make challenges, sweep up loose balls, and cut off passing lines. He made six interceptions, four tackles, and 12 recoveries, the match leader in each category.

Remarkably, Kante has fixed Chelsea's problems all on his own. He is the reason why they have conceded just two goals in their last 11 games in all competitions.

Throughout last season Chelsea were caught in the transition as opponents consistently counter-attacked through them, taking advantage of the wayward structure of Lampard's attacks; as his attackers fanned out, improvising as they searched for space, the team was exposed on the break.

This tactical flaw had threatened to undermine the current season, too, with early 3-3 draws against West Brom and Southampton looking all-too familiar, only for Lampard to change everything by plonking Kante into a new position at the base of midfield.

Contrary to popular belief Kante has never been a defensive midfielder. Since arriving in England he has always been a box-to-box player as part of a two, apart from a very brief experiment by Didier Deschamps for France in 2018 and the first few games of Conte's debut year (before Chelsea switched to the 3-4-3 that won the title). Lampard, first moving Kante into a gap between defence and midfield in June, has instigated a dramatic shift. 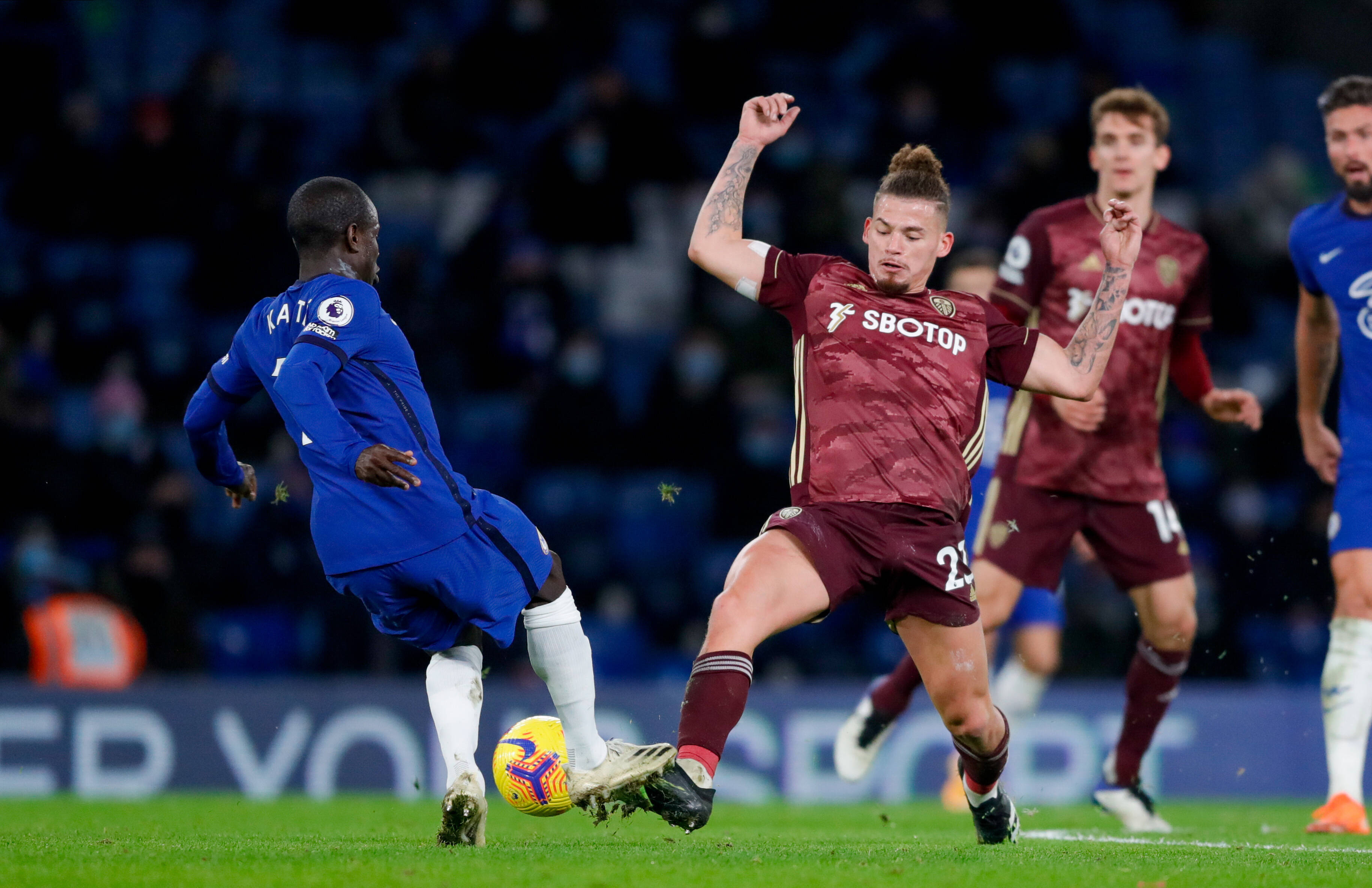 Kante in a 50:50 against Kalvin Phillips on Saturday

Since moving Kante here permanently in late October Chelsea look solid. Their attackers continue to search wildly for spaces, only now the defence isn't so easily breached as Kante screens from just behind them.

There are still gaps and flaws, which is inevitable while Chelsea play such expansive attacking football under Lampard. On Saturday, Leeds' early goal on the break caught Reece James high up the pitch and Chelsea light on the flanks. However, throughout the remainder of the match we saw further signs that Lampard is adapting and that, with Kante as the fulcrum and leader, Chelsea can maintain their current defensive record.

After a slightly chaotic first half performance, Lampard played more conservatively in the second, instructing both Ben Chilwell and Reece James to sit deeper and overlap less frequently, limiting Leeds' ability to hit the flanks on the counter. What's more, Leeds were generally forced back, pinned too deep in their own half to find space on the break, such was the attacking variety and energy in the press from Chelsea's forwards.

In the likes of Hakim Ziyech, Timo Werner, and Kai Havertz, Lampard has signed brilliant forwards from clubs that already preach hard pressing and defending from the front. Consequently Chelsea are more compressed than last season, hounding down the ball as soon as they lose it to minimise opportunities for a counter.

But when the first wave of Chelsea pressure is evaded, Kante always seems to be there to clear things up.

And the team has been further strengthened this season by the addition of Thiago Silva, whose experience has not only helped stabilise Kurt Zouma but generally organise both the defensive and midfield lines. It is increasingly rare to see Chelsea bent out of shape at the back, further patching up any of the problems that arise from those unusually unstructured positions taken up by Chelsea's more advanced players.

Silva's influence, along with the growing fear among retreating defences as they struggle to cope with the variety of creativity among Ziyech, Havertz, Werner, Christian Pulisic, and Mason Mount, has certainly contributed to Chelsea looking an entirely different prospect in 2020/21. And yet nothing compares to the difference made by Kante rediscovering his best form as the club's defensive midfielder.

In Kante they possess one of the world's best players and Lampard should take the plaudits for converting him into a new and revitalising role; in Kante they possess the key to fixing the tactical issues that had overshadowed the first two years of Lampard's managerial career.

This is very much still a team in transition, but since this is no ordinary season – it looks like as few as 85 points could win the league – Chelsea are title challengers.