Talking Tactics: What's gone wrong with Liverpool & how can Klopp fix it?

On 19 December 2020, days after beating Tottenham Hotspur in a top-of-the-table clash to return to first place in the Premier League, Liverpool hammered Crystal Palace 7-0 away from home. At that point it felt as if the reigning champions were on course to pull away from their stuttering challengers. Since then, however, results have gone downhill.

A 1-1 draw with West Brom was viewed as a blip typical of an unpredictable campaign. The following 0-0 draw with Newcastle, however, was genuinely worrying. Then came a 1-0 defeat to Southampton, and a tepid 0-0 draw with Manchester United. Four games, three points, one goal. There's no doubt about it – Liverpool are officially in a slump. But what's behind the downturn?

Defensive issues and their attacking implications

Liverpool's defending at the start of this season was nothing short of shambolic. The intensity of their pressing just wasn't the same as it has been in previous seasons, while their defensive line was all over the place. Week after week, teams were getting the space and time to play over the top of them; the low point was a 7-2 thrashing administered by Aston Villa in October.

Since then, the defending has improved a little. But Liverpool are still struggling to keep clean sheets, picking up just six from their 18 Premier League games so far. The organisational issues evidenced in opening weeks of the campaign (lack of pressure on the ball; a failing offside trap; runs not being tracked) perhaps aren't so apparent now, but injuries to Virgil van Dijk, Joe Gomez and Joel Matip have often left them without two to three of their senior centre-backs.

As a consequence of these injury woes, youngsters Rhys Williams and Nathaniel Phillips have been drafted in ahead of schedule. Both have showcased glaring weaknesses – the former in aerial duels; the latter in 1v1s on the ground. Alternatively, midfielders Fabinho and Jordan Henderson have been shoehorned into central defence, but neither has looked entirely comfortable in the role.

Liverpool are more liable to concede these days, which means they give opponents more opportunities to 'park the bus'. Just look at this situation late in the West Brom game. Once Sam Allardyce's side equalised they sat deep and loaded their own penalty area with numbers – here they have six men in the box to defend three Liverpool players, while another goes out to defend the cross. 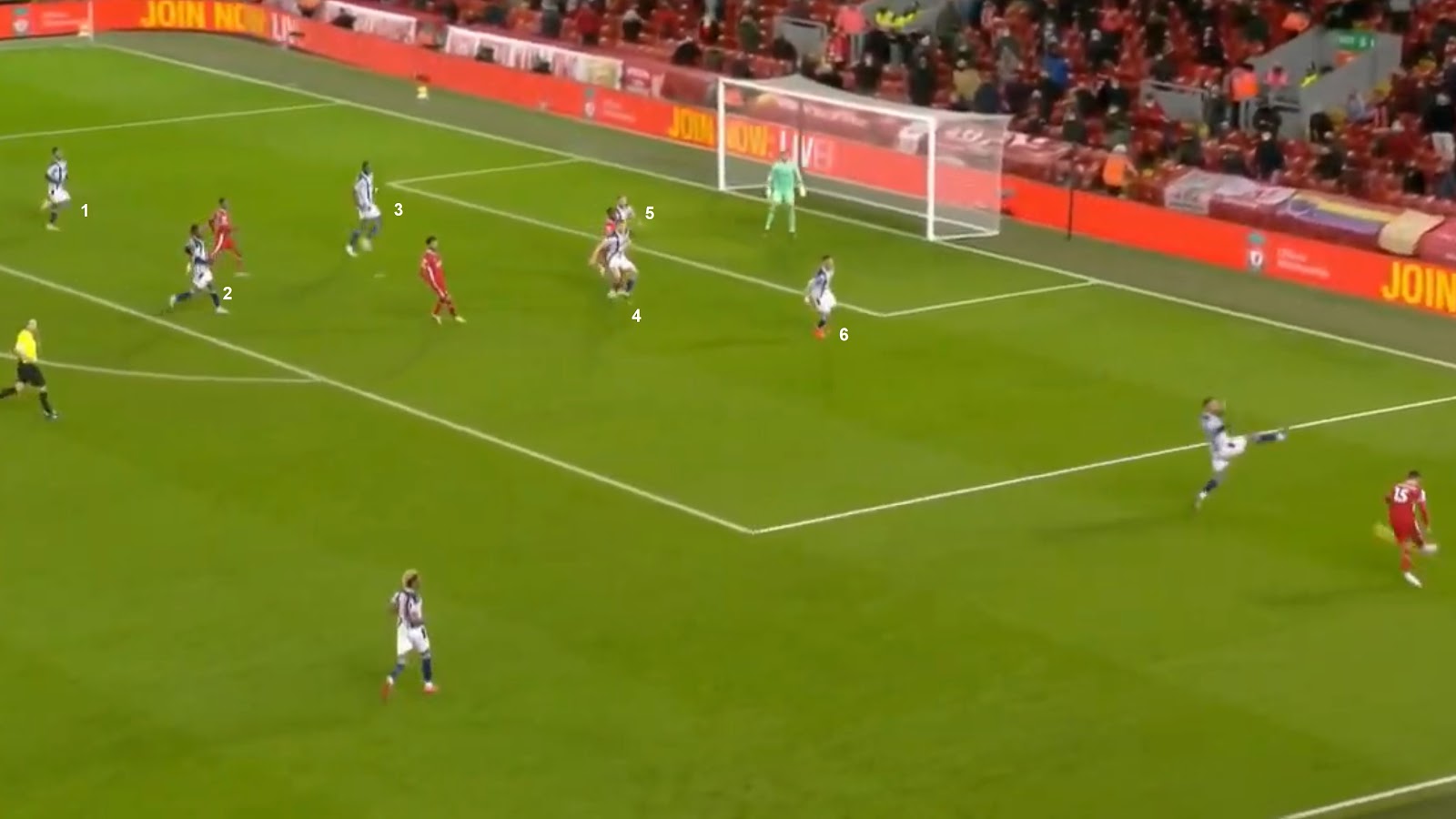 Another side effect of Liverpool missing their most experienced defenders is that they can't be so gung-ho offensively. It's very different defending 1v1 or 2v2 in transition when it's Williams and Fabinho or Henderson and Phillips at the back rather than Van Dijk and Matip or Gomez. Their current central defensive options just aren't as dominant, quick or experienced in a back line.

Against Tottenham, Jurgen Klopp's men looked wary of committing men forward for fear of conceding on the break. This is unlike Liverpool, who have won major titles on the back of their ability to suffocate and overwhelm opponents in the transition phases. Now their centre-backs need protection, and that means playing at a slower tempo and with more control so they can't be exposed so much. It's kind of ironic, but Liverpool's defensive weakness may indirectly be blunting their attack.

There are two other intriguing statistics. One is they are playing significantly fewer long balls now – roughly 10 fewer per hour of ball possession than last season. And they are also scoring fewer goals in transition – the percentage of goals they get from counter-attacks has dropped from 11.8 per cent last season to 8.1 per cent this season.

These stats in isolation don't say a lot, but pulled together they help to paint a picture of how Liverpool have adjusted tactically. They now have more of the ball, play less directly, and score fewer goals from counters. This fits with what the eyes can see – that this version of Liverpool is more controlled and less transitional in approach.

This could be down to a desire to limit the amount of times their inexperienced central defenders are exposed in transition. It may also have something to with the lack of fans at games constantly urging them to attack and up the tempo, particularly at Anfield. There is also a possibility that opponents are simply being more defensive against them. Perhaps it's a combination of all of the above – either way, Liverpool aren't the same devastating counter-attacking force they once were.

Defensive issues and external factors may have seen a slight change in approach from Liverpool, but they have also suffered from misfortune. Their central defensive injuries and subsequent failed experiments with youngsters has led to Klopp pushing both Fabinho and Henderson into the back four. Not only are they unable to replicate the defensive dominance of Van Dijk and Matip or Gomez, but this also significantly weakens the midfield.

Henderson has been the team's engine for years, bringing relentless energy and aggression to the team's midfield. Fabinho has been the anchor, reading play and snuffing out attacks. With both removed from the centre of the park, it's no wonder Liverpool's all-round play has suffered.

Without two key midfielders, Klopp has fielded inconsistent selections in the middle three – the likes of Xherdan Shaqiri, Alex Oxlade-Chamberlain, James Milner and Curtis Jones have all been rotated in and out in the last four games. This inconsistency doesn't help to foster attacking cohesion.

Liverpool have also had some bad luck in front of goal. Sadio Mane's form hasn't wavered – this season he averages a goal every 8.2 shots and he's scored once from his nine shots in the last four games. So no major change there. But Mohamed Salah has failed to find the net in league action since the win over Crystal Palace, and that's not down to a lack of chances.

Against Newcastle, there were two big moments where normally the Egyptian would expect to score. Here he's played clean through on goal after a clever run behind to latch onto a ball over the top, but his shot is tipped wide by Karl Darlow. 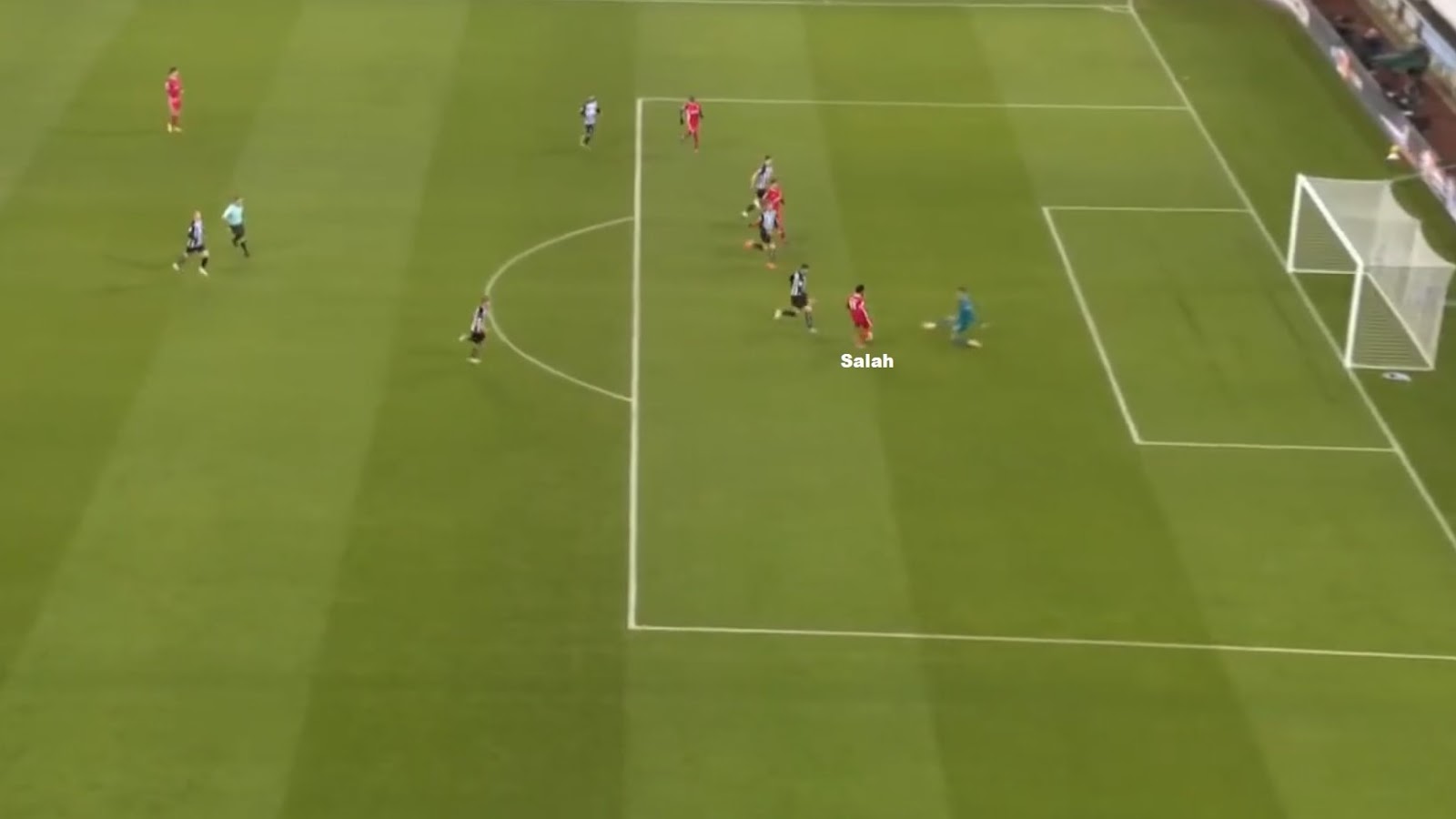 And below we see a slightly more difficult chance where Salah has a couple of defenders closing his space, but the goalkeeper is further away. It wouldn't be strange for him to curl this into the far corner of the net; instead he doesn't even hit the target. 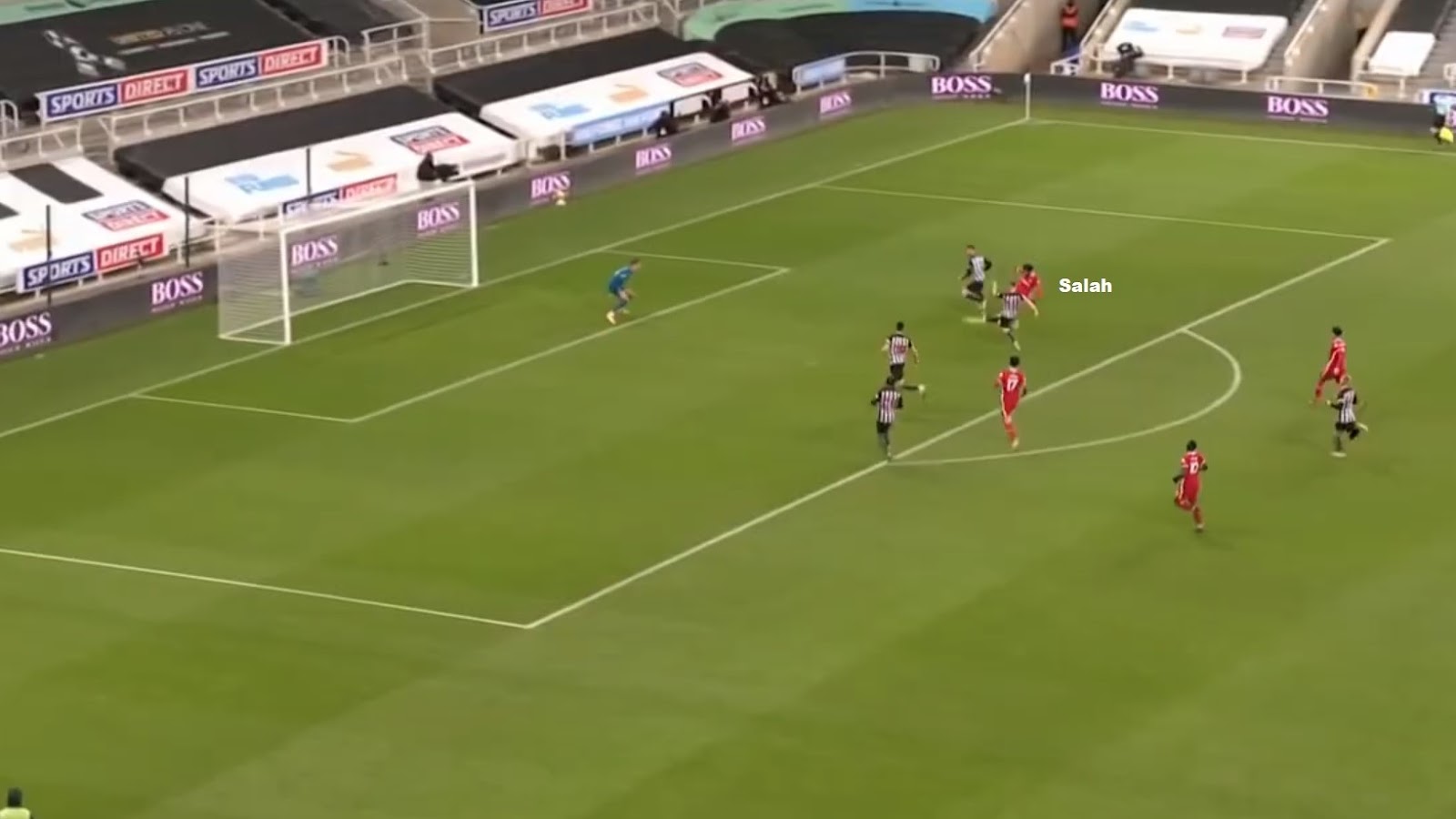 Salah has, generally speaking, been excellent this season, averaging a goal every 4.4 shots. That's basically the exact same rate he achieved in his debut year at Anfield, where he hit 32 goals overall. In the last four matches, he has had 10 shots – from his conversion rate this season, you'd expect him to score two goals, but instead he's scored none. Basically, if those two chances against Newcastle go in, his form doesn't 'waver', Liverpool win, and their recent run doesn't look so bad.

A change of shape could help Liverpool as it did Manchester City. By changing the arrangement of the midfield from a '1-2' to a more fixed '2-1', Klopp could get extra protection to his central defenders. But of course the problem then is who sits, especially when Fabinho is likely to spend most of the season in defence with Van Dijk and Gomez out. Henderson and Thiago is an option for a double pivot, though neither would be considered a natural 'defensive midfielder' in isolation.

The 4-2-3-1 would give Klopp room to use more attackers. Perhaps Diogo Jota and Roberto Firmino could play together? Or maybe Divock Origi could be used as a more direct outlet? These would be ploys designed to divert defensive attention away from Salah and Mane. But there's a reason Origi has never been a regular starter, and it's just as easy to speculate that Jota and Firmino would get in each other's way rather than complement one another and enhance the overall attacking dynamic.

The truth is Liverpool's most obvious solution comes in the January window. With Van Dijk and Gomez out, another centre-back is necessary. This could be back-up, or a partner for Matip to facilitate Fabinho's return to midfield. The latter option is more costly, but it also kills two birds with one stone – ensuring a proper centre-back pair whilst also allowing Liverpool to play their best defensive midfielder in his natural position. No more need for caution to protect a vulnerable defence.

Whatever happens in this window, Liverpool's current run of form is unlikely to last. Eventually, Van Dijk will return and so will Salah's scoring touch. If those two things happen sooner rather than later, Liverpool can get back into pole position in the Premier League's title race.