Manchester City may be running away from everyone else in the Premier League title race, but the fight for the top four and Champions League qualification is genuinely competitive. Chelsea and Manchester United are in that battle, and they face off this Sunday at Stamford Bridge. Here, we at Tribal Football preview the big game.

Chelsea had their toughest test since Thomas Tuchel took over from Frank Lampard as manager during midweek, when they travelled to take on Atletico Madrid. Up against the current league leaders in Spain and a side renowned for their performances in Europe in recent years, Tuchel's men showed what they are made of.

Atletico didn't manage one single shot on target on the night as Chelsea contained one of the continent's most effective counter-attacking machines. This will give the Blues reason for optimism ahead of their clash with Manchester United.

Ole Gunnar Solskjaer's side are built around their ability to turn defence into attack quickly, with the speed and intelligent runs of Marcus Rashford, Bruno Fernandes and Anthony Martial up front. In transition they are capable of opening up anybody, but Chelsea will hope their new 3-4-3 system will do the job on Sunday just as it did against Atletico.

Tuchel's introduction of an extra centre-back seems to have helped make up for some of the individual deficiencies seen towards the end of Lampard's reign. They may not be much better at stopping counter-attacks at source, but they have more numbers back to deal with the moves once they get going.

Of course, the unanswered question is: Can the new shape really neutralise United's speed and quality on the break? Cesar Azpilicueta, Andreas Christensen and Antonio Rudiger isn't the strongest or fastest collection of defenders, and all could be 'got at' by the likes of Rashford and Fernandes.

That will be Chelsea's defensive test, though going forward they will no doubt look to overload the flanks and could take advantage of a fairly passive Manchester United defence. United's wide players aren't the best when it comes to applying pressure or tracking back, and Tuchel may see this as a weakness to exploit, particularly down the right-hand side.

Callum Hudson-Odoi was used at right wing-back against Atletico, and he might fancy going one-versus-one with Luke Shaw. If United's left winger doesn't go with Hudson-Odoi, he could even open up a two-on-one with Mason Mount on that side and work openings to cross or get in behind the visitors' back line. 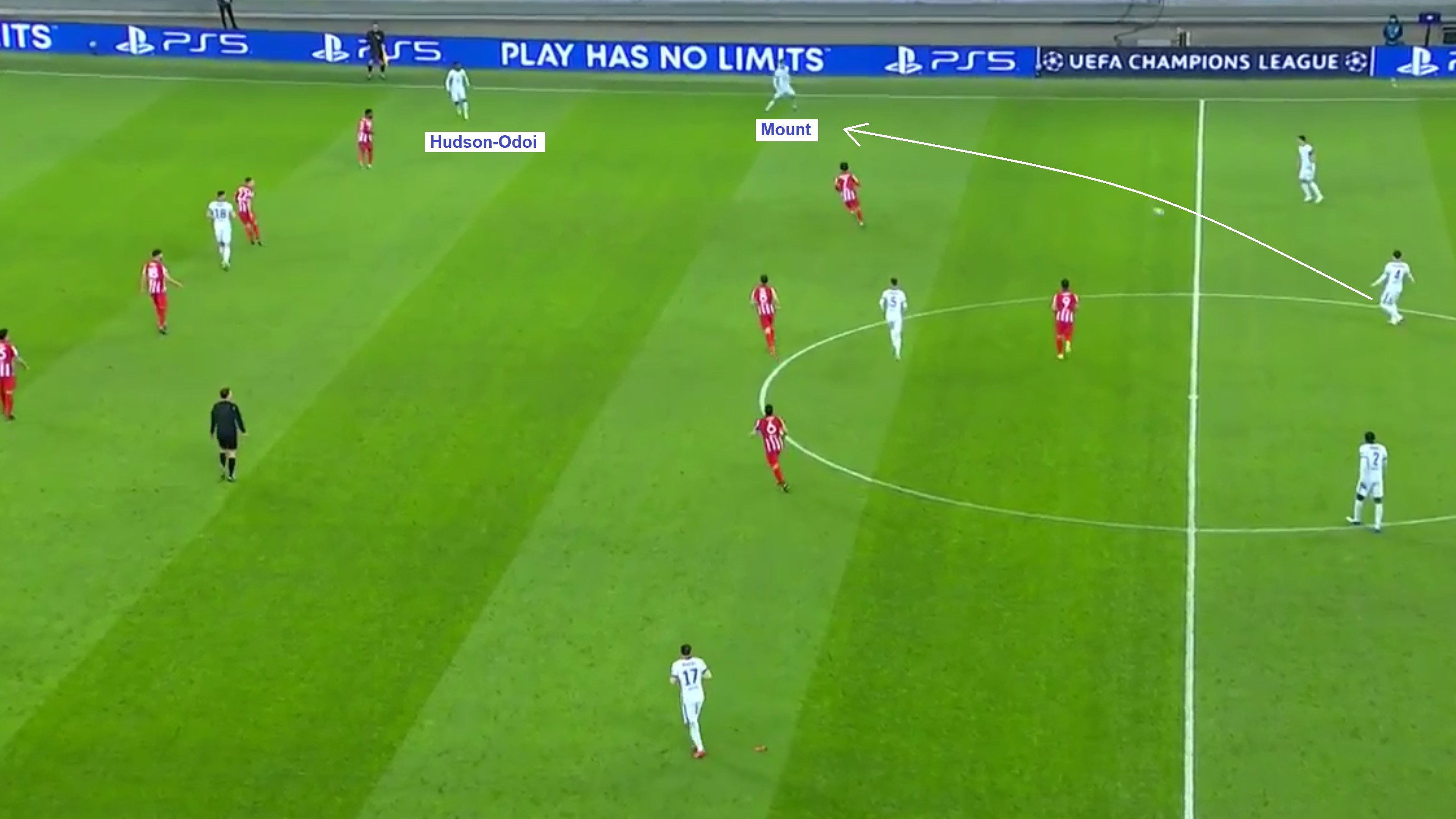 Above we see an example of Mount and Hudson-Odoi working in tandem on right side against Atletico, with the latter pinning back Atletico's left winger while the former takes up a deeper position out wide and receives the ball with time and space to drive forward, combine with Hudson-Odoi, and work a dangerous crossing opportunity.

Most of Manchester United's attacking potency comes in transition. They can be nullified when trying to build play from the back, and Chelsea will be aiming to make sure this is the case again on Sunday. A lot depends on how Tuchel instructs his side to press.

If the Chelsea boss asks Mount and Timo Werner to stay narrow and support the striker, this could leave space for United to progress out wide. They are much better doing this down the left than the right, due to the personnel, with Shaw capable of picking out line-breaking passes, Fernandes roaming to find pockets of space, and Rashford also available for combinations.

However, given that Tuchel's Chelsea usually dominate possession – not to mention Solskjaer's risk-averse approach to big games – and the most likely pattern for this game is that Chelsea will have the ball while United try to defend and counter-attack.

Assuming Edinson Cavani is 100% fit, he could make a difference up front. His defensive work ethic is outstanding – he presses forwards, sideways and backwards consistently and with intensity.

Considering Tuchel will probably go for his usual 3-4-3 and Solskjaer his usual defensive 4-4-2, and Chelsea will have a three-versus-two on Manchester United's frontmen when trying to play out from the back. Cavani's attitude and intelligence in pressing could mitigate that overload somewhat, and may even rush some mistakes out of a new-look Chelsea back line.

If Chelsea do establish control of possession, the key player in their midfield to nix will be Mateo Kovacic. The 26-year-old has taken on a lot of the playmaking responsibility with dribbles and long balls over the top. Solskjaer may instruct Scott McTominay to get tight, take his time away, and stop him from driving or passing forward. 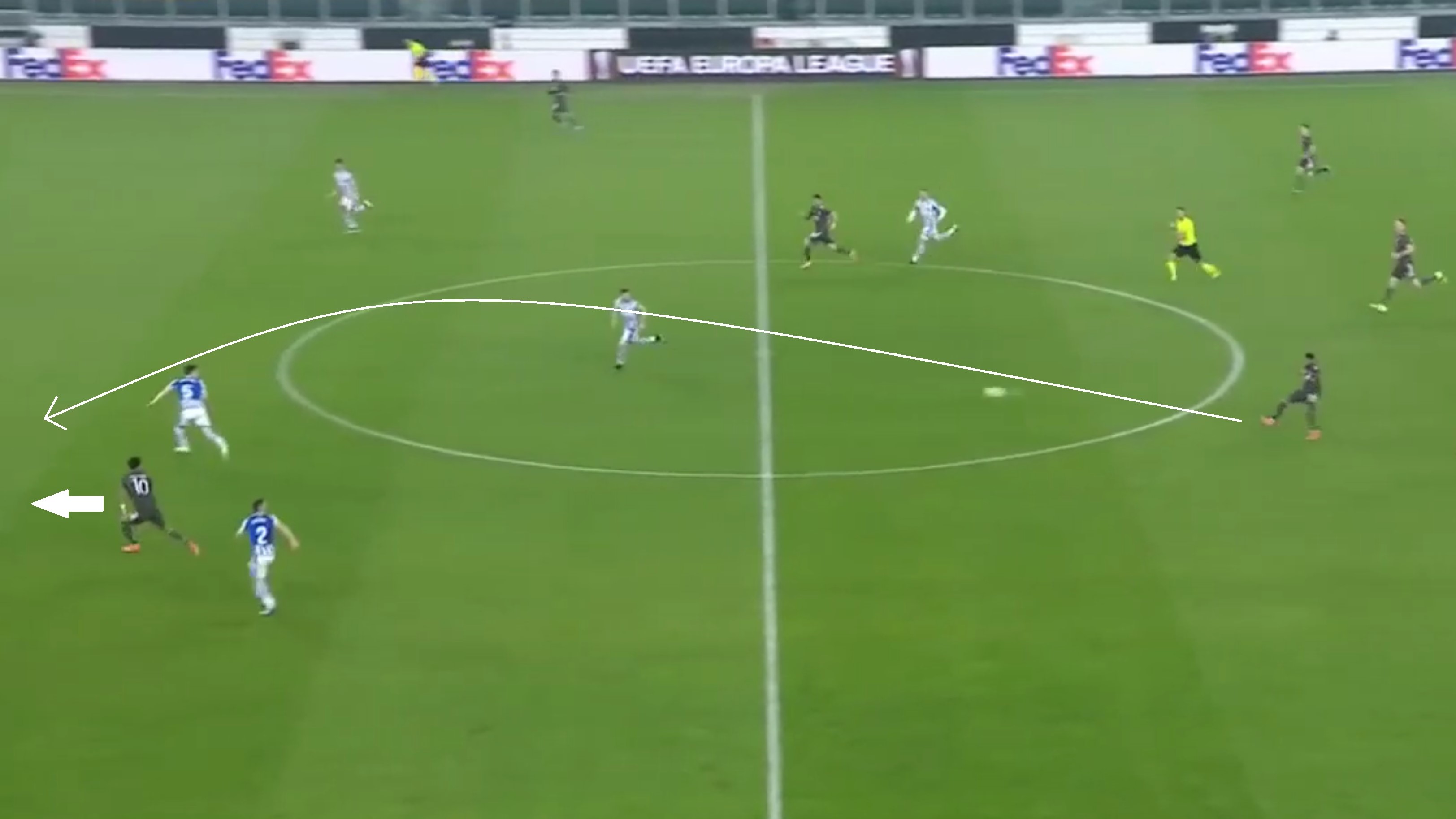 Assuming United are able to stay organised defensively, they will always pose a threat on fast breaks like the above example in the recent win over Real Sociedad, where you can see Fred finding Rashford in space between the defenders on the counter. Rashford went on to score from this scenario.