Man Utd to include Alexis in bid for BVB whiz Sancho

If Liverpool lift the Premier League title in May we will surely look back on weekend eight as the pivotal moment in the race – when Liverpool won a last-gasp penalty to steal three points against Leicester City as Manchester City deservedly fell to defeat at home to Wolves.

Without Aymeric Laporte City look alarmingly ordinary in defence. Without Kevin de Bruyne, they lack the creativity needed to close an eight-point gap to Liverpool.

As we begin the international break it looks as though heads will roll elsewhere in the division. Manchester United and Everton are both reaching critical points, while Tottenham Hotspur's capitulation in Brighton appeared to signal the end for Mauricio Pochettino.

Tottenham looked to be suffering from PTSD at the AmEx on Saturday, their players wandering around the pitch in a daze, failing to anticipate their opponents' movement and failing to grab a hold of this match. Credit should go to Graham Potter for capitalising on this with a surprise 4-4-2 formation, a new system that further confused the Tottenham players. If anyone was going to struggle to make sense of an unexpected line-up it was that shell-shocked Spurs team.

Aaron Mooy and Pascal Gross started in the wide positions but immediately darted into the number ten zone when Brighton won the ball, countering through the middle of the park in a narrow 4-2-2-2. Eric Dier had perhaps the worst game of his life, and that was partly because he just couldn't spot Mooy and Gross as they sneaked into gaps behind Dier on his blind side. Mooy was exceptionally good, playing a major hand in the first two goal.

Brighton's unexpected tactics blew Spurs away in the first half and Mauricio Pochettino couldn't recover, his desperation to get some control betrayed by frequent formation changes – first to 4-4-2 and then to 3-4-2-1. Brighton mirrored this last one for the final ten minutes, ending a brief period of Spurs pressure and confirming Potter had emphatically won the tactical battle. 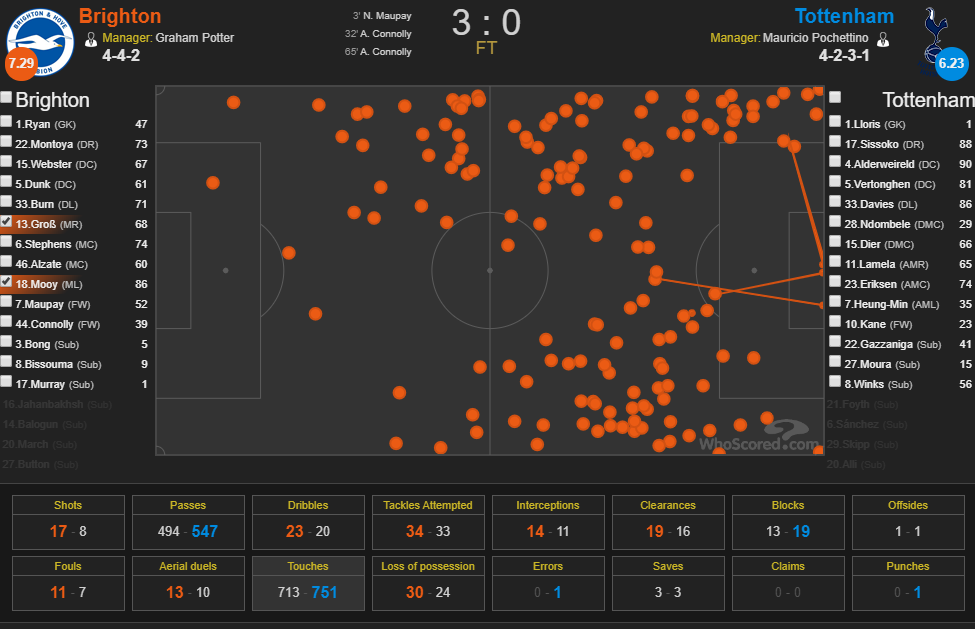 When Wolves missed three one-on-one opportunities in the first half it looked as though they would be punished for Patrick Cutrone's slow and hesitant centre-forward play, but this turned out to be an abject – perhaps decisively so – performance from Manchester City. Nicolas Otamendi was a train wreck, rushing out of position and repeatedly losing his head to give Wolves two further chances in the second half. Adama Traore took both.

Nuno Espirito Santo deserves praise for noting Cutrone's flaws and replacing him with a speedier player, but also for organising Wolves' 3-5-2 so effectively; neither Raheem Sterling nor Riyad Mahrez found room in the half-spaces because the visitors' midfield three worked so hard to stay close to their defence and shield them. In De Bruyne's absence, City didn't have anyone who could break the lines or pull Wolves out of their shape.

Ilkay Gundogan is too conservative in possession and David Silva does not have the same energy as in his youth, while neither City full-back committed to the byline. Wolves were very comfortable throughout, offering further hope to City's opponents in the coming months. John Stones might be back after the international break, but nevertheless the champions have to use Otamendi at least until January. For that reason alone they won't be catching Liverpool any time soon. 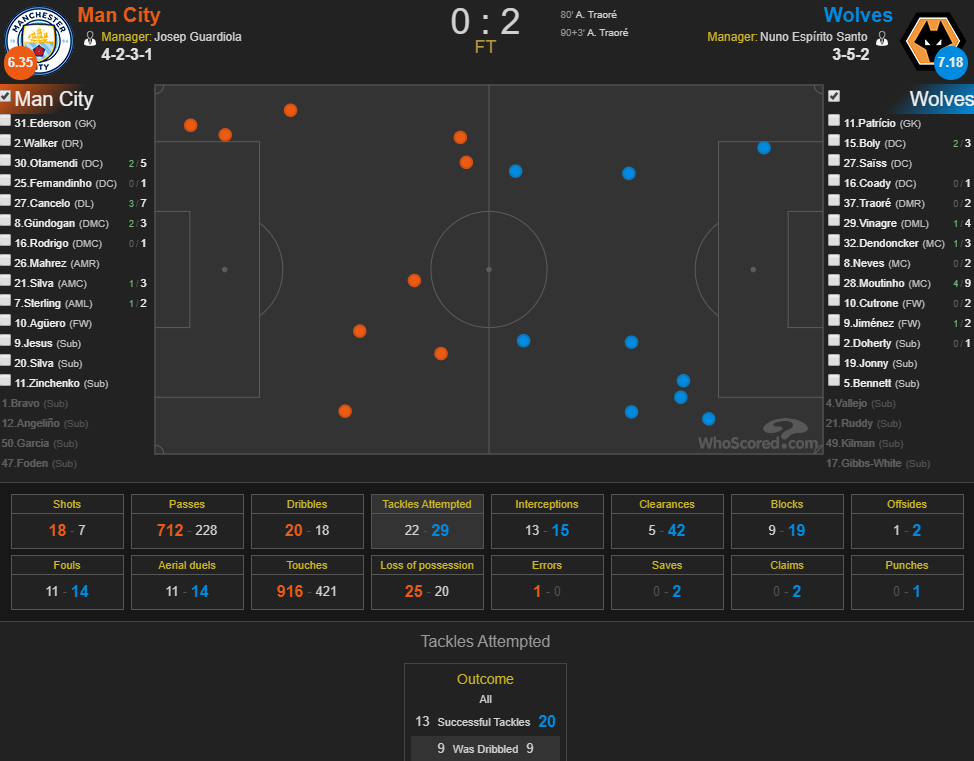 Not that Liverpool are quite as good as the league table would suggest. Their xPoints stats suggest seven more won than expected so far, reflecting the big strokes of luck they enjoyed first at Sheffield United last weekend and now against Leicester City. It is increasingly clear Liverpool still lack a creative midfielder who can conjure some magic on his own and feed the front three into space when facing deep-lying opposition.

Liverpool's incredible 2019 has perhaps masked this important flaw, one which got a lot of attention in the summer of 2018 when Jurgen Klopp pursued Nabil Fekir. Leicester restricted the space for Sadio Mane and Mohamed Salah because none of Liverpool's midfielders really tested them, whereas a playmaker capable of running through the lines would have disrupted the Leicester shell and forced them to frantically reorganise.

Jack Grealish is the sort of player they need – someone bold enough to pull the strings from in front of a defensive blockade just as Philippe Coutinho did before his move to Barcelona.

Best of the Week – Aston Villa's tactical adaptation at Norwich

After initially looking disjointed and under-stocked in attack this season, crossing aimlessly as their wingers ran into cul-de-sacs, Aston Villa have begun to look like a decent attacking side over the last fortnight. Dean Smith is adapting quickly, improving Villa's tactics every game by increasing their short-passing options in the final third, bunching creative players together to allow for high-tempo interchanges around the penalty area.

Conor Hourihane came into the side last week and Jack Grealish moved to the wing, and these two were superb together at Norwich City. This week's new trick was instructing Anwar El Ghazi to come into the number ten space when Villa had the ball on the left, further adding options in this zone of the pitch. El Ghazi played a crucial role in Villa's opener and helped set a tone of assertive attacking football for the visitors at Carrow Road.

Worst of the Week – Directionless Everton and Man Utd

Manchester United never looked like scoring against Newcastle on Sunday, and although Ole Gunnar Solskjaer's isn't to blame for their poor recruitment he is to blame for the complete absence of tactical direction. Juan Mata was completely anonymous, yet again, and at the moment none of their attacking players seem to know what they have been asked to do. Surely Solskjaer, presiding over the club's worst start to a season in 30 years, is on his way out.

Marco Silva's time is also up. Everton have now lost four in a row and, like United, don't play with any obvious purpose. Their 4-2-3-1 is stale and ambling, characterised by a central midfield that never seems to take hold of a game and an attack that relies too heavily on the overlapping full-backs.