After an exciting opening weekend of Premier League action we can safely predict that the 2019/20 season will be entertaining.

Manchester United and Chelsea were chaotic at Old Trafford on Sunday, both showing serious structural flaws but also bold attacking football that should ensure there are plenty of goals in their respective matches this year. Further down the table, the newly promoted clubs and Brighton gave a taste of what's to come with courageous attacking play that led to 14 goals across their four matches.

Here are three tactical things we learnt from the weekend games:

There were 27 goals across the 10 matches, thanks primarily to the influx of progressive managers intent on aesthetically pleasing football; Brighton, Norwich, Sheffield United, and Aston Villa all look to play on the front foot in an expansive formation. That is good news for neutrals, who can enjoy the wide open spaces and resulting flurry of goals, whether that means a 4-1 thrashing by the Big Six or a 3-0 victory over mid-table clubs.

Graham Potter made two attacking substitutions in the 64th minute with Brighton 1-0 up at Watford, highlighting his belief in territorial dominance and assertive attacking football. Both subs got on the score sheet in a deserved win at Vicarage Road. Norwich were considerably more naïve with their shape, stretched deep and wide in a 4-2-3-1 formation that allowed Liverpool to practically walk through the middle of the pitch.

Sheffield United's overlapping centre-backs have already become a cult hit in the Premier League, although Chris Wilder's side were more conservative than they had been in the Championship. Certainly their home matches will be highly entertaining, whereas understandably at Bournemouth Wilder was too concerned by the pace of Ryan Fraser and Callum Wilson to go all-in.

This season is going to be a lot of fun. 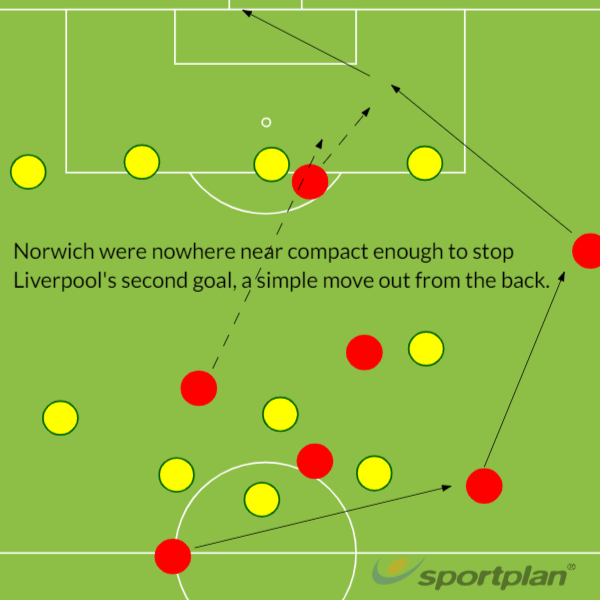 Back in February, Ole Gunnar Solskjaer said his side's pace was as the main reason for the club's good form, comparing them to the team he was a part of in the 1990s, and then by May was complaining that a lack of fitness had halted their progress. After a full summer of preparation and with Daniel James and Aaron Wan-Bissaka added to the side, Man Utd could develop a coherent tactical identity under Solskjaer based on raw speed.

They scored three goals on the counter-attack against Chelsea, benefitting from sitting deeper in the second 45 minutes and hitting the visitors on the break. Having helped create a chaotic first half with an open formation, United may choose to drop back more regularly in their next few matches, although after Sunday's game upcoming Premier League opponents will probably retreat and concede possession to Solskjaer's side in order to negate the pace of Anthony Martial, Marcus Rashford, and James.

Nevertheless quick breakaways will become a defining feature of the club under Solskjaer, with goals like James's a frequent occurrence whenever the opposition tires or begins chasing the game.

Kevin de Bruyne only started 11 Premier League matches in 2018/19 while Riyad Mahrez struggled to break into the first team in his debut campaign at the Etihad, meaning their partnership down the right is a brand new weapon for Pep Guardiola; the Belgian has taken to regularly drifting out to the right flank, dominating against Liverpool at Wembley before an equally assured performance at London Stadium on Saturday.

City were helped by Michail Antonio's lacklustre defensive performance. He continually failed to track back from the left wing, leaving Aaron Cresswell overwhelmed as Mahrez and De Bruyne teamed up on that flank. The Algeria international went close twice shortly before crossing for Gabriel Jesus to open the scoring, and on both occasions De Bruyne was heavily involved after drifting across.

Opponents will need to be considerably sharper in the transitions than West Ham were, while managers will be wise to play a particularly defensive left winger to follow De Bruyne's runs. 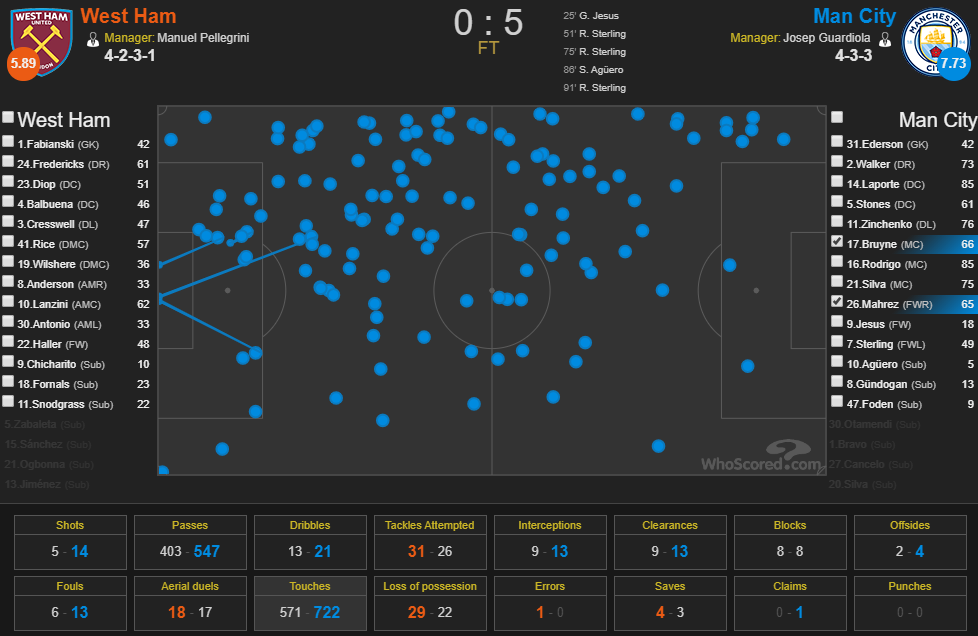 Best of the Week:

Tottenham were the only team to come from behind to win at the weekend, and they have Mauricio Pochettino's tactical acumen to thank for breaking down a stubborn Aston Villa side. Spurs' initial diamond 4-4-2 was ineffective primarily because it was too narrow to test Villa's most vulnerable areas – left-back and right-back – and because John McGinn and Jack Grealish performed admirably in central midfield.

In the 64th minute Pochettino switched to a 4-2-3-1 formation and brought Christian Eriksen on in an unusual central attacking midfield position. The Dane ran the match, forcing Villa into nervous retreat and winning multiple set-pieces that allowed Tottenham to keep the pressure on; the two crucial goals came from lucky deflections in the box, a typical sign of increasingly desperate defending in numbers.

Worst of the Week:

As Jose Mourinho highlighted in the Sky Sports studio, Chelsea's defensive shape was particularly poor after they lost the ball. Frank Lampard needs to work on how to compress the formation during turnovers after United managed to score breakaway goals on three separate occasions. Both full-backs committed too readily to attack, with Cesar Azpilicueta twice at fault for failing to tuck inside and cover for the centre-backs, but more importantly Chelsea's midfield did not get tight enough to their defenders. N'Golo Kante was sorely missed.

There were plenty of positives for Chelsea, however, who could have been 2-0 up before United took the lead. Mason Mount and Ross Barkley initially worked well together in the number ten space, overwhelming Scott McTominay in the first 20 minutes, as Lampard's assertive possession football almost gained the early initiative.