It looks like the Premier League title will once again be lifted by Manchester City, making Pep Guardiola the first manager to retain the crown since Sir Alex Ferguson in 2009. If they do, they'll have won 197 points across the last two campaigns, an unprecedented level of dominance that should be considered the single greatest achievement in the history of English football.

It's not over yet, of course, but Vincent Kompany's winner on Monday night puts one hand on the trophy. Liverpool did well to win late on at Newcastle United with Jurgen Klopp's tactical substitutions again coming off, while elsewhere Bournemouth were woeful against the nine men of Tottenham Hotspur and – yet again – the race for the top four revealed the deep flaws at Manchester United, Chelsea, and Arsenal.

Here are three things we learnt from the penultimate round of matches:

Leicester City came very close to handing Liverpool the opportunity to win the Premier League title on Sunday and while they could not legislate for that astonishing Vincent Kompany winner Brendan Rodgers can, perhaps, take some blame for failing to capitalise on a strong first-half performance.

At times on Monday night Leicester looked like Rodgers old Swansea City team: pleasing on the eye, but far too reliant on backwards passes that do no trouble their opponents.

They did an awful lot right, mind. The key tactical feature from a Foxes perspective was the use of Hamzah Choudhury and Youri Tielemans to man mark David Silva and Phil Foden respectively, shimmying across to cut off the passing lines into Man City's dual playmakers. The hosts were unable to slip the ball into the half-spaces, which meant taking the longer route round to an under-par Raheem Sterling and Bernardo Silva, the latter crowded out by Ben Chilwell and James Maddison.

But 41% of all Leicester's passes were backwards, while only 15% took place in the final third of the pitch. Their neat triangles showed a renewed confidence, and yet they were mostly playing the sort of idle tiki-taka long out of favour in the Premier League; more assertiveness and risk-taking on the ball, in particular from Maddison and Tielemans, and Leicester could have exposed Man City's soft centre. Jamie Vardy did not get a single opportunity to run at Kompany, suggesting Leicester failed to fully embrace their task. 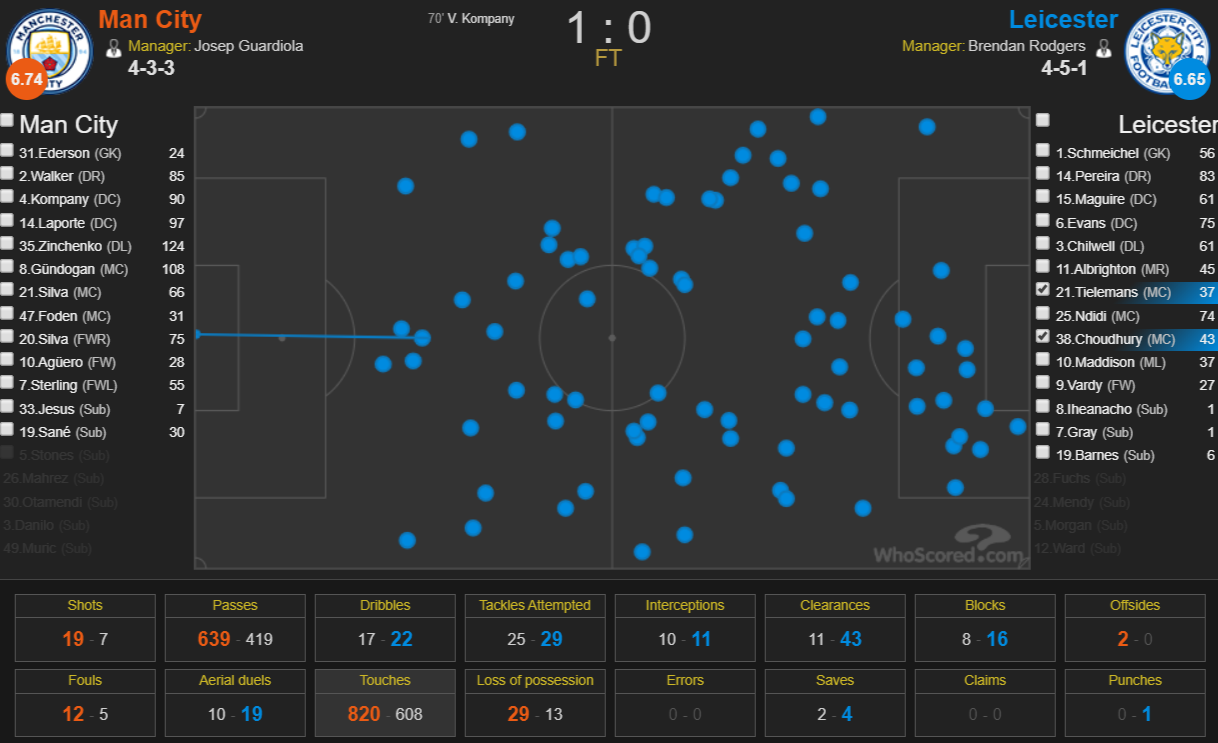 The Premier League has never been so unequal, and the gap between the elite clubs and the rest has never appeared so insurmountable. This has created two distinct tactical methods in the division, with only a few looking to hold possession and the majority hoping to sit deep and hit sides on the counter-attack. One side attacking and the other side defending is now a common occurrence in the Premier League.

The extent to which this pattern, a knock-on effect of financial disparity, has become entrenched was evident in Bournemouth's terrible second-half performance against nine-man Tottenham on Saturday. The hosts did not deserve their last-gasp winner after a bizarrely lifeless 45 minutes in which Bournemouth's numerical advantage forced them to play on the front foot.

Referee Craig Pawson flipped the teams' roles with those red cards, and Eddie Howe looked as stumped as Mauricio Pochettino. The hosts wanted to absorb Spurs pressure and then break behind the visitors via Callum Wilson, Ryan Fraser, and Josh King. Asked to hold most of the possession and they crumbled. What a strange division this has become.

When Manuel Pellegrini arrived at West Ham United it looked like yet another error made by the board in pursuit of glamorous football. From the swanky (but not fit for purpose) new stadium to signing ageing star players like Pablo Zabaleta, West Ham found themselves forever on the brink of crisis as they chased a stylish, though hollow, rebrand. Hiring 65-year-old Pellegrini, pulling the former Premier League title winner out of semi-retirement in China, was surely just another wrong move.

Instead Pellegrini has completed a near-perfect transitional year in east London. Quickly changing his initial intention from possession football to a counter-attacking approach, he has created a sense of purposefulness, coherence, and stability at the club. Playing Declan Rice in midfield was a masterstroke, as was Robert Snodgrass's return to the fold, and although it took most of his first season in charge it looks as though the back four is finally settled, too.

Ryan Fredericks, signed from Fulham last summer, was superb against Tottenham in a 1-0 win and even more impressive this weekend in West Ham's 3-0 victory over Southampton. He won 10 aerial duels, four tackles, two interceptions, and four dribbles, then capped an assured performance with the third goal of the game. Pellegrini's problem-solving has, rather impressively, put them one win away from a top ten finish. 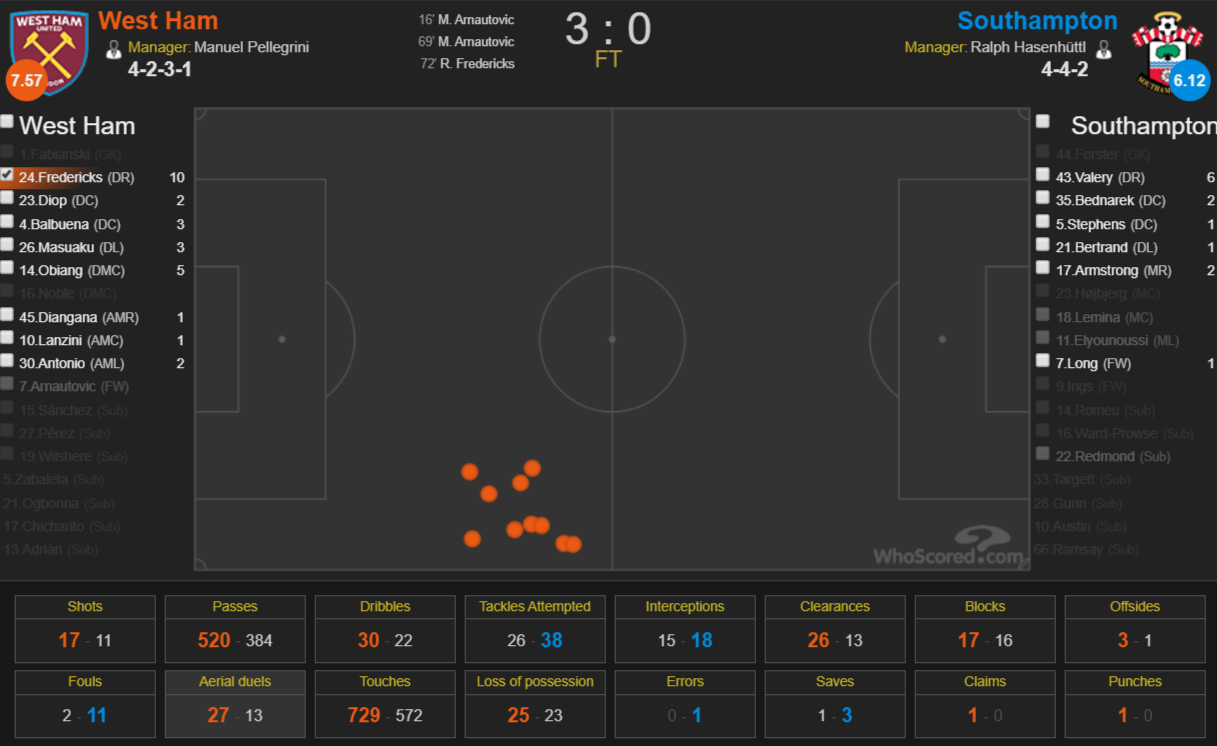 Every decision Jurgen Klopp makes seems to come off in the Premier League, and while it looks as though that won't be enough to win Liverpool the title this side nevertheless deserve the utmost praise. It was a battling win at Newcastle, and another one in which Klopp's substitutions made the difference.

Xherdan Shaqiri, missing in action for most of 2019, was quiet after coming on, unable to move with freedom between the lines to help Liverpool break down their hosts. But ultimately it was his in-swinging freekick that handed another sub, Divock Origi, the chance to win the three points. Origi may not be around for much longer but his clinical finishing here – as against Everton – is the only reason Liverpool have challenged City right until the final day.

Chelsea, Spurs, Man Utd, and Arsenal have won just two matches between them over the last four rounds of Premier League football, an appalling record that reflects the scale of the tactical rebuilding job needed among the Big Six. While Spurs are still punching above their weight and merely need a deeper squad for next season, the other three are in trouble.

Tactically speaking, Chelsea continue to play without any semblance of a Maurizio Sarri team, suggesting either the manager will leave or big changes are needed in the dressing room (a whole summer to coach them may also make a huge difference – Sarri certainly thinks so). Arsenal do not yet have a discernible identity and that is largely because Unai Emery is too experimental in his formations from game to game, while Ole Gunnar Solskjaer has a monumental task to find order among the chaos at Old Trafford.

This summer transfer window is arguably the most important of the decade for all three clubs.