Although the 25th round of Premier League matches brought plenty of goals and two dramatic comebacks, in many ways it was another oddly disappointing weekend in terms of quality. Two televised 0-0 draws were drab affairs and, as Liverpool pulled 22 points clear, the rest of the division is starting to make their achievement look less impressive. Only three of the top eight teams won.

Tottenham certainly rode their luck in seeing out a 2-0 win on Sunday, and while the match turned on the red card in the second half (Man City are too complexly built to cope with their attacking lines being suddenly altered) Pep Guardiola's side should have been comfortably ahead by then. Their profligacy in front of goal is becoming a serious problem; Sunday's loss was further evidence City need to replace David Silva and find a left-back capable of overlapping Raheem Sterling.

The situation was made worse by Guardiola's in-game mistakes. Sergio Aguero had been their most dangerous player, dropping cleverly off the front line and into the gaps either side of the excellent midfield pair of Harry Winks and Giovani Lo Celso, which is why Man City fell flat once Sergio Aguero was sacrificed for Joao Cancelo.

Guardiola was full of praise for his side's performance in his post-match press conference, but City cannot continue to dominate the ball only to show a lack of ruthlessness in the final third. 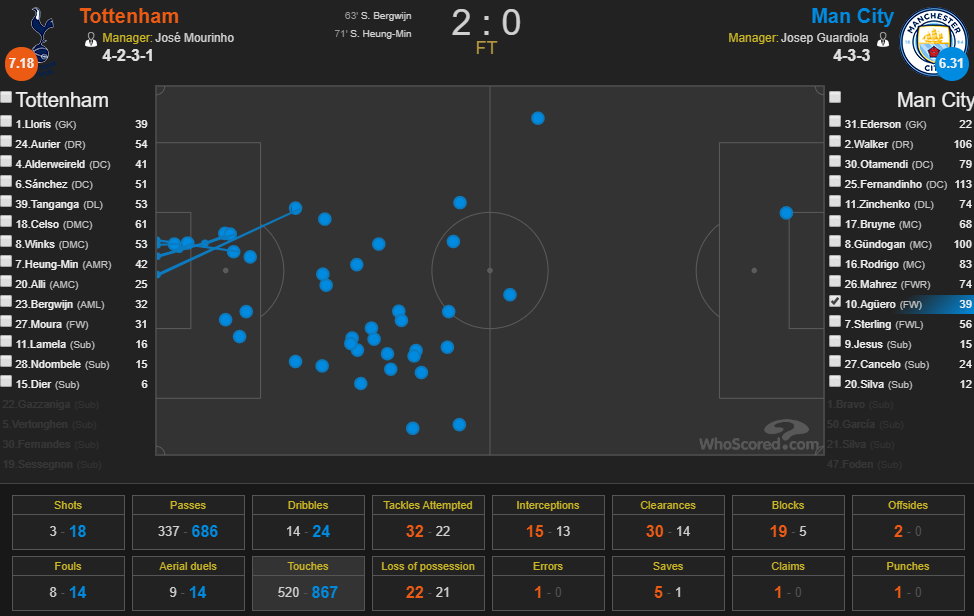 West Ham never looked settled even when 3-1 up against Brighton. Confidence is brittle at the London Stadium and that is partly because of their manager's negative, defensive instincts; hire a fire-fighter manager and the players will start believing things are constantly on the verge of bursting into flames.

David Moyes brought Arthur Masuaku on for Michail Antonio in the 74th minute with the hosts 3-1 up, switching from a back four to a back five in a move that immediately spread panic through the defence. Masuaku was directly at fault for both goals (playing a hospital pass that led to the mix-up for Pascal Gross's goal, then getting caught out of position ahead of the cross for Glenn Murray's equaliser) but that fact is secondary to the psychological impact of his introduction.

West Ham need to show bravery in the battle against the drop. Instead, Moyes made a nervous decision that instantly increased the tension inside the stadium. Unsurprisingly, his defenders seized up, conceding two dreadful goals.

Harvey Barnes' late miss denied Leicester City the three points and denied Brendan Rodgers the satisfaction of having tactically outwitted Frank Lampard on Saturday afternoon. The hosts deserved to win after their manager's small tweak to central midfield at half-time, when he shook up a static midfield trio by instructing Youri Tielemans to sit higher and James Maddison to move deeper. Leicester essentially moved from a 4-3-3 to a 4-2-3-1, meaning they could now weave through the centre of the park.

For the first 45 minutes their possession was a tad aimless, with centre-backs Jonny Evans and Caglar Soyuncu unable to find team-mates higher up the pitch. This allowed Chelsea to win the territorial battle, forcing Leicester backwards as Callum Hudson-Odoi and Reece James dominated on the right flank. Rodgers' switch shifted momentum.

For the second half Maddison came short to receive passes from the centre-backs, and then hit vertical balls through to Tielemans – exposing Chelsea's problem with fielding Jorginho alone at the base of midfield. This movement led directly to the first goal and set the tone for a half in which Antonio Rudiger's headed goals went against the balance of play. 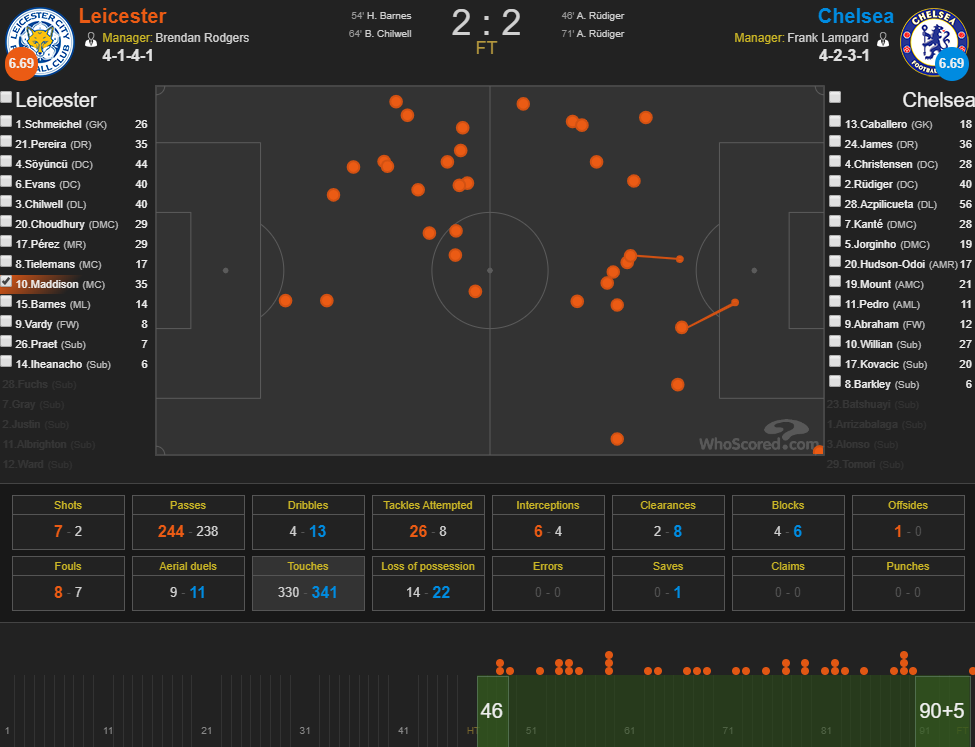 Watford's collapse was largely of their own making, having conceded two soft goals at the end of the first half; Nigel Pearson will have been furious to see Yerry Mina left free in the box to head home just seconds after he had scored another. However, Carlo Ancelotti deserves credit for the way he shuffled the pack after Fabian Delph's red card.

He moved Mason Holgate into midfield and kept three attacking players on the pitch, refusing to settle for a point in an aggressive 4-4-1 with Theo Walcott and Richarlison given licence to break. His three forwards all combined to score a stoppage-time winner on the counter-attack.

Manchester United's 0-0 draw with Wolves was the perfect example of what happens when two counter-attacking sides go head to head. Neither team really wanted the ball while both managers were wary of their opponent's threat, leading to low-tempo football in which few players risked getting forward.

Arsenal's 0-0 draw with Burnley was more about the still-awkward attacking patterns of Mikel Arteta's brittle side. They, like United, are clearly still in transition. It isn't uncommon for clubs to go through transitional periods under new managers, but rarely in Premier League history have so many gone through it at the same time. Perhaps that explains the dearth of quality in 2019/20.