Liverpool, Man City could be expelled from Champions League

Willian: I built Chelsea; but it's now difficult to stay

Man Utd convinced they can tempt De Ligt from Juventus

After a couple of pretty slow weeks of Premier League football the midweek round threw up some excellent games and interesting results at both ends of the table.

Manchester United's 2-0 defeat to Burnley feels like a significant moment in Ole Gunnar Solskjaer's career – although we've thought that many times before and it never seems to make a difference.

Aston Villa's late winner against Watford and Newcastle's dramatic comeback at Everton had a big impact on the relegation battle, while Bournemouth's 3-1 win against Brighton could be the turning point of their season.

Here are three tactical things we learnt from the action:

There was more than a hint of good fortune about the winning goal and given that Norwich were the better team for long periods – pus Harry Winks was lost to injury – most Spurs fans are struggling to see the optimistic angle on Wednesday's win. However, on the ball Spurs are gradually improving thanks to Jose Mourinho focusing on bunching attacking moves through the middle of the park.

Targeting Norwich's soft centre, and aiming to pick them off in the transitions by instructing Winks to play quick balls forward from the base of midfield, Jose Mourinho had Tottenham attackers all occupy similar territory in the number ten space. As in previous games Lucas Moura dropped and Erik Lamela cut inside as Giovani Lo Celso moved into a similar space – but this time Son Heung Min was also central. He played like an attacking midfielder, rather than hug the left touchline.

It's only very tentative progress, of course, and indeed it is one step forward and one step back at the moment. Spurs' lack of pressing under Mourinho is a serious issue. Here, it allowed Norwich to calmly pass and move, building up the pitch in little triangles without any threat of being closed down. The one time Tottenham actually launched into a press Lo Celso tackled his man and, catching the visitors spread out to attack, played in Serge Aurier to set up Dele Alli's opener. 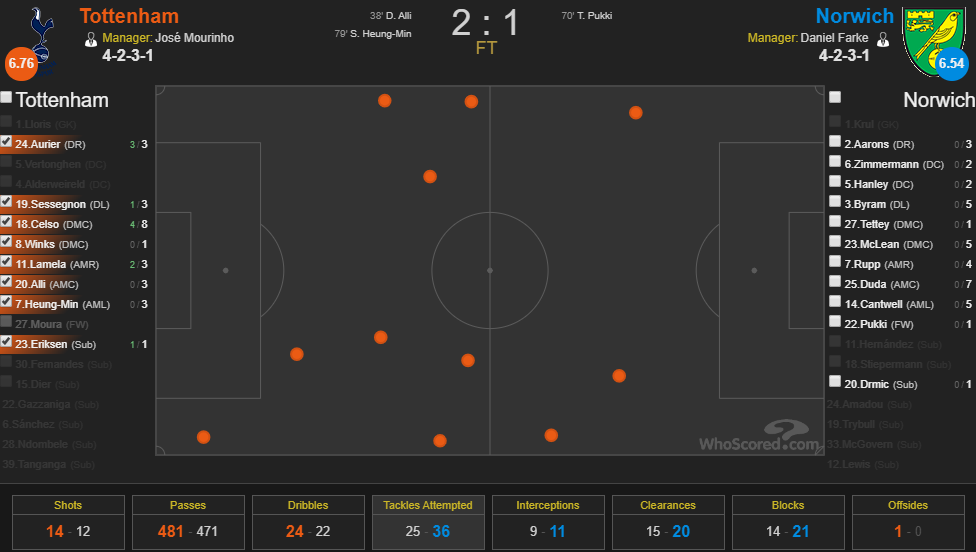 It was by no means the first time this season that Man Utd looked like they didn't have a plan, but their 2-0 defeat on Wednesday was perhaps the most startling example yet of just how few ideas they have. Clearly Ole Gunnar Solskjaer is not organising their attacks, and consequently the likes of Juan Mata and Andreas Pereira are simply shuttling the ball from left to right, unable to play with the tempo that comes from synchronised movements from team-mates.

Aaron Wan-Bissaka was their most dangerous player, Burnley's narrow 4-4-2 leaving space for the right-back to overlap into, and yet this just played into the visitors' hands; a tall and powerful ball like Burnley want you to resort to swinging crosses into the box.

Sean Dyche deserves credit for a surprising use of a high press. Burnley did not fall back into a shell as expected, even though this is the tried and tested way of stunting United. Instead, they chased the ball throughout, meaning the hosts couldn't settle. Solskjaer's players are easily ruffled. If they start consistently losing games to teams who push up, then Man Utd are in serious trouble.

A 95th minute winner in a relegation six-pointer is just the kind of result that can kick-start a season, but if Villa are to build on their win against Watford then they need to align this psychological boost with a change of tactics. Dean Smith's 3-4-3 had been working, making the defence stronger, but Watford showed it leaves Villa too light in central midfield.

Danny Drinkwater and Marvelous Nakamba struggled to get on the ball, while Villa relied too heavily on shunting it out wide to Jack Grealish. Their game lacked fluency or urgency, a side effect of a 3-4-3 in which the wing-backs are isolated and the wide forwards low on quality. The obvious solution for Smith is to add a third body in the middle, switch to a 3-5-2, and get the central midfielders to play with greater depth.

Grealish needs to be put back through the middle, so it makes sense to make him the third midfielder; he is unable to effect the game on the left, where opponents double up on him, and only managed to turn this game on its head after he began to roam into central areas. 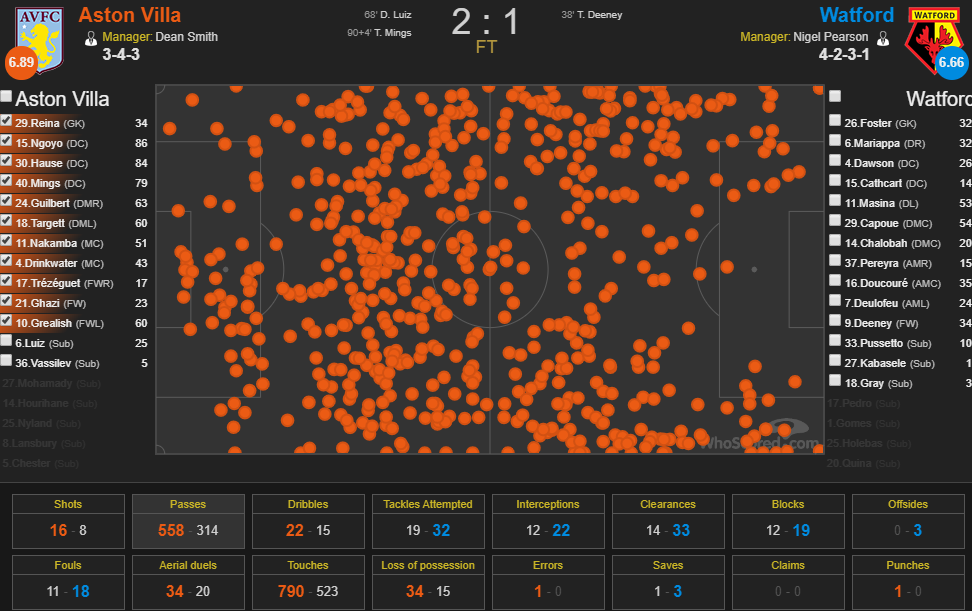 Best of the Week – Leicester back on form

Leicester City needed a big win to break their poor run of form, and it came thanks to an excellent individual performance from Harvey Barnes – who really enjoyed running at the ageing Pablo Zabaleta. As important was the Foxes' ability to dominate central midfielder, with all four goals coming from finding space on the edge of the D.

West Ham played a big hand in that, their unexpected 3-5-2 proving disastrous primarily because they looked unsure of their roles in the system. Leicester's opener, for example, saw Barnes sneak into psace on the edge of the area, getting in-between a flat-footed Declan Rice and Robert Snodgrass, both of whom had been moved out of their usual position.

For all Chelsea's possession they just could not break down a stubborn Arsenal defence and get the second goal against ten men – but that really didn't need to be a problem considering they were already 1-0 up. There is simply no excuse for the poor defensive positioning that allowed Gabriel Martinelli to break through from an opposition corner; it is basic training ground work that betrays Frank Lampard's inability to coach the attack-to-defence transition.

But that wasn't the only flaw. A series of wild attacking substitutions left Chelsea playing in a 4-4-2 for the last 10 minutes with Mason Mount on the left wing and Jorginho all alone in midfield. It was far too open and confusing, and once they had retaken the lead it meant Chelsea had no way of shutting the game down.