Liverpool, Man City could be expelled from Champions League

Willian: I built Chelsea; but it's now difficult to stay

Man Utd convinced they can tempt De Ligt from Juventus

Manchester City are almost there. A 1-0 victory over Burnley made it 12 on the bounce for Pep Guardiola's men, an extraordinary run that looks set to eclipse Liverpool's probable points tally of 96 – which would be the third highest in English football history.

But neither title challenger features in our tactical roundup this week, primarily because there was little to surprise us in either result. Instead, we take a look at Arsenal's latest formation error, fitness concerns scuppering Manchester United, and an ever-changing tactical battle in Southampton versus Bournemouth.

Here are three tactical things we learnt from the weekend Premier League action:

Unai Emery has made a habit of picking the wrong starting selection this season, and again on Sunday he chose a formation that clearly played to Leicester's strengths. A flat 4-4-2 meant only two central midfielders to deal with the movement of James Maddison and Youri Tielemans in central attacking midfield, despite plenty of available evidence suggesting these two would flit around together in the half-spaces.

It took a while for Brendan Rodgers to realise where Arsenal's weakness was. Maddison started on the right, with Rodgers anticipated a tougher battle in central midfield so picking both Wilfried Ndidi and Hamza Choudhury. At half-time he substituted Choudhury for Ashley Barnes, capitalising on the vulnerability of the visitors (and pitting Barnes against Shkodran Mustafi).

Arsenal's red card clearly didn't help, but Leicester would have won regardless. In the second half Maddison grew in influence before crossing for Tielemans to open the scoring; it was no surprise Maddison found the time and space he needed in the pockets around Henrikh Mkhitaryan. Emery should have replaced the Armenian with Matteo Guendouzi much sooner than he did. 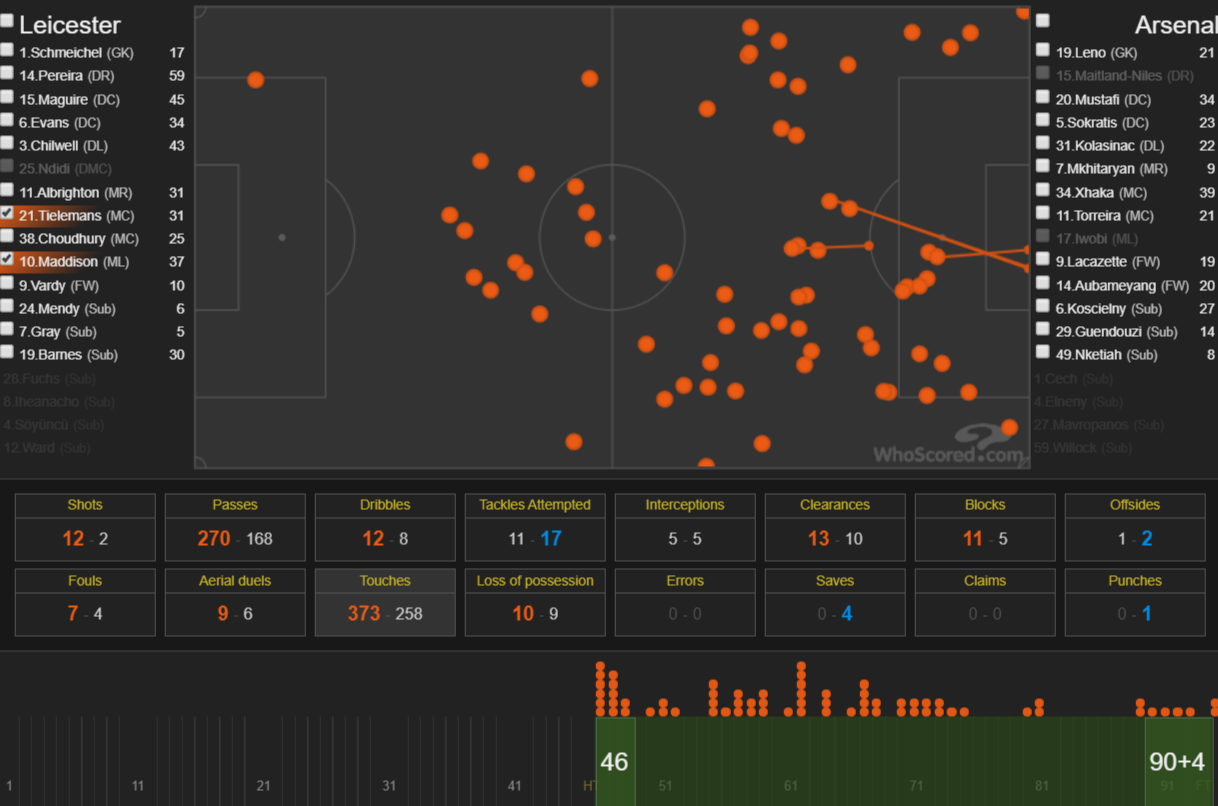 Manchester United's performance in the 1-1 draw with Chelsea on Sunday was very similar to the one in midweek against Man City: strong and cohesive for 30 minutes, before poor fitness levels let them down. But their quick start at Old Trafford was enough to show Ander Herrera, Nemanja Matic, and Juan Mata could all play key roles for Ole Gunnar Solskjaer next season should they sign new deals and remain at the club.

Solskjaer's desire to play high-tempo football means he must prioritise his most intelligent players, those who constantly seek out space by shuttling into gaps and quickly moving the ball on. Herrera's importance to United is hugely under-rated, and it is no coincidence they looked stronger with him in the side; the Spaniard neatly sews the lines together, and was a crucial component of United's good form at the beginning of Solskjaer's reign.

Matic has looked lost for some time, but on Sunday was confident in possession and constantly asked for the ball, recycling possession with aplomb. Mata was the most creative player on the pitch, working hard to create space in the final third and drawing attention away from the splitting strikers Romelu Lukaku and Marcus Rashford.

None of this lasted very long, but Solskjaer should have seen enough to know that, with better fitness training, these three players can be an important part of the rebuilding project.

3) Hasenhuttl and Howe both react to create fascinating tactical encounter

Southampton were 2-1 down at half-time largely because their defence could not handle the two-pronged counter-attacks led by Callum Wilson and Joshua King, while their own goalscoring opportunities arose in the brief moments they funnelled their attacks through the middle.

That's why Ralph Hasenhuttl switched from 4-3-3 to 3-4-1-2, which simultaneously meant they had more bodies in the middle (James Ward-Prowse drove forward to provide the equaliser) and a third centre-back to help stamp out the Bournemouth counters. The hosts turned the game on its head, only for Eddie Howe to then make his own tactical adjustments.

The Cherries went to a 3-4-1-2 themselves, matching the hosts man for man in order to disrupt their flow in the final third. It worked well, closing off the passing lines that had given Southampton control of the match. As a direct consequence Hasenhuttl's side twice gave away the ball away in dangerous areas, the first leading to Wilson's equaliser and the second handing Wilson a one-on-one he couldn't finish.

It was a fascinating battle of wits on the touchline. 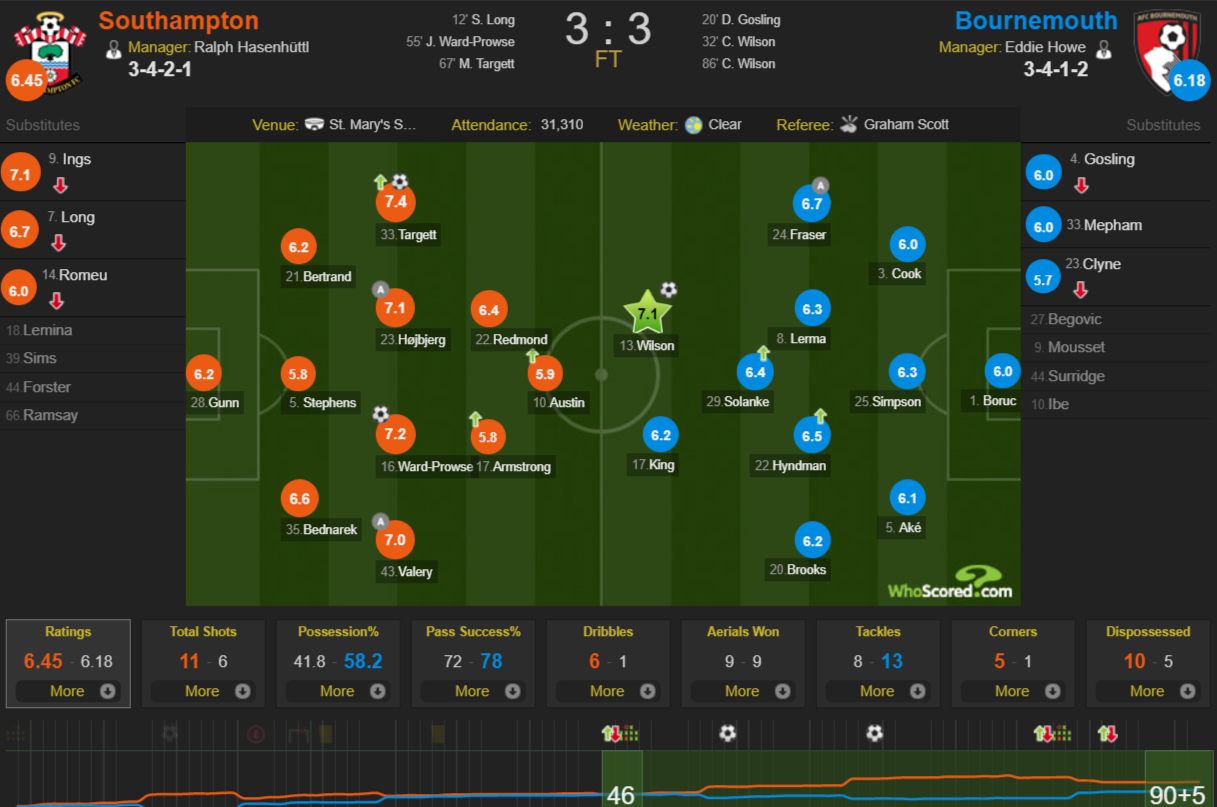 Fulham have found a balance between the overly attacking football of Slavisa Jokanovic and the attempted cautiousness of Claudio Ranieri, and although this is largely because the pressure has been lifted Scott Parker still deserves credit. They were defensively solid throughout Saturday's game (although Cardiff's nervousness clearly prevented them from playing with creative freedom), and yet still there was room for Ryan Babel to play a free role.

The Dutchman has performed surprisingly well since joining the club in January, his brilliant winning goal this weekend capping a display that saw him roam the width of the pitch, confounding Cardiff defenders by popping up unexpectedly in attack. The Fulham players were happy to cover for him on the left, allowing Babel to drift through the Cardiff midfield. He won't be at the club next season, but after three successive victories Parker surely will.

In the first half at the Tottenham Hotspur Stadium West Ham's midfield was shambolic. Robert Snodgrass and Mark Noble were chasing the ball too readily, leaving Declan Rice alone to cover Christian Eriksen, Heung-Min Son, and Dele Alli in the number ten space. It was mostly luck that the Hammers were level at the interval.

West Ham adapted admirably in the second half, but in truth Spurs were just too tired to continue to trouble a deep-lying defence. Marko Arnautovic suddenly turned up and started running the channels, which gave the visitors the energy they needed to break - and ultimately win the game. It was a good switch by Manuel Pellegrini, but the biggest take away on Saturday was that Spurs are not physically ready for the challenge of Ajax this week.