PSG chief Leonardo on Man Utd striker Cavani: He knew his cycle was over

Manchester City's 5-0 victory over West Ham United at London Stadium was overshadowed by the frequent use of VAR, which disallowed one goal, gave another, and then re-ordered a missed penalty from Sergio Aguero.

We could discuss the pros and cons of VAR endlessly, but far more interesting is the tactical battle that took place on Saturday afternoon. The game was fairly evenly balanced for the first 20-25 minutes and, with Man City slow to warm up, the hosts should have done more to assert themselves before Gabriel Jesus's opener all-but killed the match.

Consequently our analysis, live from London Stadium, focuses predominantly on that important early section of the contest:

Man City lacked sharpness during the opening 25 minutes, which gave West Ham the opportunity to lay the foundations for an upset. There was nothing wrong with Manuel Pellegrini's tactics – the midblock ensured the Hammers were not camped inside their own half – but Jack Wilshere's selection and Manuel Lanzini's positioning meant the hosts could not build momentum.

Wilshere was slow in possession and rarely showed for the ball when West Ham's defenders attempted to build out, creating flatness in midfield that ensured City could settle comfortably in their shape. This was particularly problematic when counter-attacking scenarios looked likely to develop.

As the visitors grew into the match, Lanzini's very high position made matters worse. He was frequently alongside Sebastien Heller, presumably with the intention of collecting the striker's knock-downs, which further isolated the two-man West Ham midfield. Lanzini would have been much better dropping deep to take the ball and drive at a slow-looking City.

To highlight the point, Robert Snodgrass briefly did just that after coming on in the second half, his directness and energy from midfield unsettling City and triggering a five-minute spell of West Ham pressure. 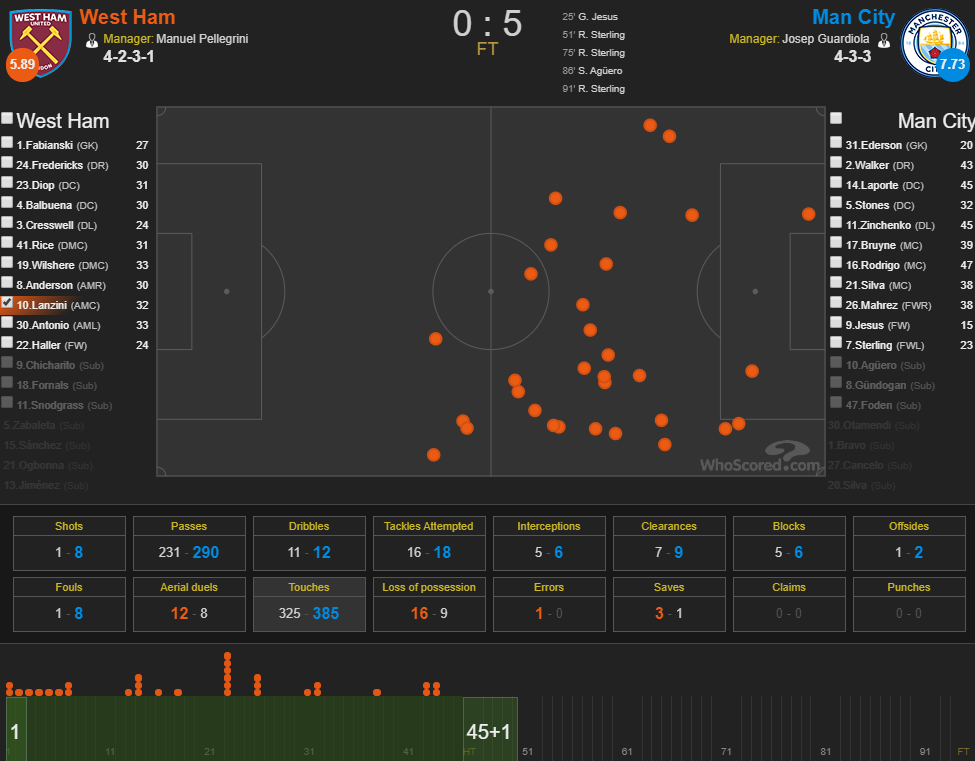 Throughout this opening 25 minutes, with the game still in the balance, City began to move out of first gear thanks to a poor performance from Michail Antonio, who surprisingly started on the left wing – presumably for his supposed defensive qualities up against Kevin de Bruyne, the man who made the difference against Liverpool by drifting out to the right wing.

Antonio continually failed to track back or, when he did, simply let the overlapping full-back get beyond him. It was a glaring flaw in West Ham's formation: their 4-2-3-1 was in a decent shape, except for the one gap that allowed Rodri or Kevin de Bruyne to easily shift the ball out wide to Riyad Mahrez in acres of space. Combining with Kyle Walker, he got City in behind three or four times before eventually helping set up the opener.

Just moments before Gabriel Jesus scored after a move down the right, Mahrez hit the side netting with a shot that prompted Aaron Cresswell to throw his arms up in disgust and berate Antonio. It didn't have any effect. It was no surprise to see Antonio hauled off at half-time.

3) Rodri elegance helps open up the pitch for the champions

Antonio made it too easy for City to cut through West Ham down the right, but the hosts were retreating by the half-hour mark largely because any attempts to press City proved fruitless. This was partly down to the aforementioned problems in midfield, but also because Rodri showed a tactical intelligence and technical skill that allowed City to work forward in neat triangles.

He was initially brushed off the ball in the early stages, and certainly could have found himself in trouble had West Ham been more assertive, but overall Rodri's shimmying into space and one-touch passes gave Guardiola's side a considerably better outlet than Fernandinho can offer in that position. At times it felt completely useless for West Ham to attempt to press; Rodri looks the perfect player to keep the ball moving and work City out of any tight spot.

He made the second most passes in the match with 72, and with the third highest accuracy, 90.3%. 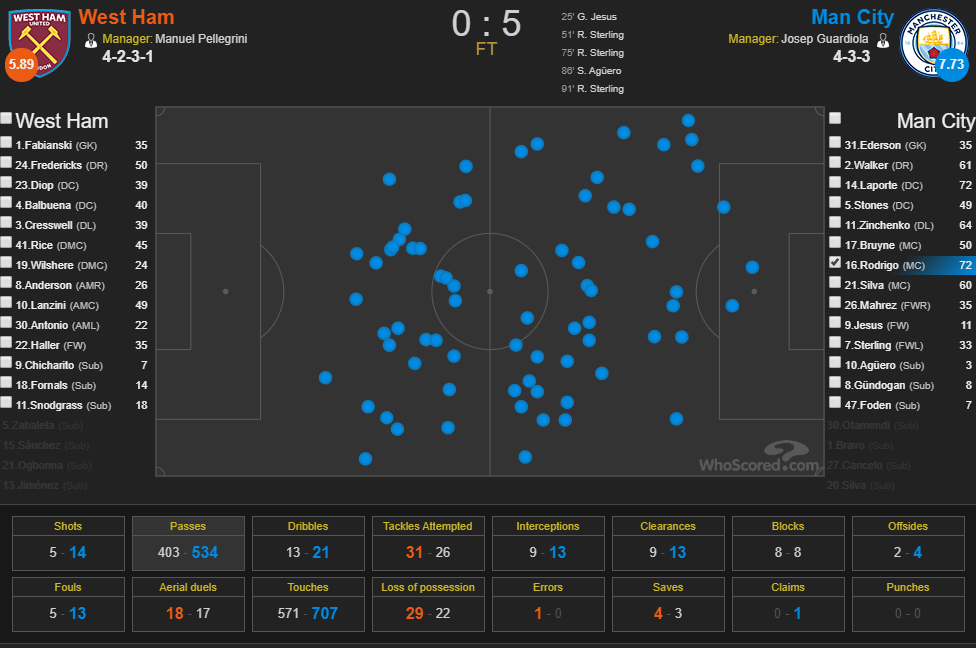 4) West Ham need to learn how to use Haller's talents

The one positive Pellegrini could take from this match was the performance of new signing Sebastien Haller, whose strength and first touch made him a threat throughout. Ultimately Haller managed just a single shot on goal, a tame hooked volley, but only because his team-mates failed to play to his strengths.

His physical presence ought to encourage crosses into the box and a high frequency of longer balls forward to instigate counter-attacks. However, West Ham only attempted 12 crosses in the game and Heller only won two headers.

With Felipe Anderson on one wing and Manuel Lanzini on the other, during the second 45 West Ham ought to have bypassed their own weak central midfield more and hit the flanks early, before dropping crosses towards their target man. That might sound like a drastic change in formation, but direct football would have helped lift the crowd and push Guardiola's team back.

As it was, there was no point having Lanzini float so close to Haller.

On the one hand, Guardiola might be worried that City again struggled to get into top gear in the first half, but on the other conserving energy like that may be a deliberate tactic. After all, West Ham clearly tired as the second half wore on and, chasing a goal, committed so many men forward that De Bruyne and Raheem Sterling were able to sprint into wide open spaces.

Three goals in the final 15 minutes is not particularly unusual for City, and judging on the of yesterday's performance we may see an awful lot more of this kind of performance: oddly subdued, yet efficient and ultimately terrifyingly easy. Starting slow and wearing the opposition down would certainly be a good way to stay fresh as City look to go deeper in the Champions League this season.