The Premier League's 'Big Six' clashes have been pretty dire this season. Across 15 games so far there have been four 0-0s and nine have ended with only one team on the score sheet. The current average stands at 1.36 goals per game.

We can blame the compressed league table for this. Unlike in recent seasons when 95+ points has been needed to lift the title, this year managers know they can afford to drop points – and are largely happy to just stay in the conversation.

There are still only eight points separating the top six, and everyone knows that even the current leaders, Manchester City, are capable of a sudden slump in form. Consequently managers are prioritising a safety-first approach to the 'Big Six' games, and, since pandemic football means empty stadiums and exhausted players, these rigid tactical plans are keeping their shape.

It's bad news for neutrals - and sadly the same thing will probably happen on Thursday evening when Liverpool travel to Tottenham Hotspur. Jose Mourinho is a cautious defensive manager at the best of times and will hope to frustrate the visitors as much as possible, while Jurgen Klopp's goalscoring issues only add to the lurking sense that a 0-0 is imminent.

If we are to be optimistic and predict a more entertaining game, then the best bet is on Spurs stealing the points.

KANE AND SON CAN GET BEHIND LIVERPOOL'S HIGH LINE

The biggest criticism levelled at Mourinho's Spurs is that they only have one plan. But Plan A just happens to be perfectly suited to exploiting an issue that has plagued Liverpool throughout their recent poor form.

Fabinho's move to central defence has weakened Klopp's midfield. His team now lack a strong defensive player capable of stamping out counter-attacks at source or screening Liverpool's attacks; Fabinho would prowl on the edge of the action, quickly winning second balls or mopping things up before the opponent could play a pass in behind Liverpool's high defensive line.

Consequently Harry Kane should get some joy dropping into the number ten area, as he loves to do under Mourinho, and feeding Heung-Min Son in behind. The chances of this are increased by the likelihood that Jordan Henderson will partner Fabinho at the back, further weakening the visitors' midfield; Thiago is too slight, and too much of a playmaker, to track Kane successfully.

Without their usual bite in midfield Liverpool are also susceptible to the wriggling energy of Tanguy Ndombele, the man whose excellent technical ability in tight spaces can help Tottenham evade Liverpool's first wave of pressing – and set Mourinho's side going on the counter.

If that wasn't worrying enough for Liverpool, then consider the fact Trent Alexander-Arnold has been in poor form lately and is expected to sit high up the pitch in order to help this goal-shy team create chances. Son can anticipate finding space behind Alexander-Arnold as Spurs break. 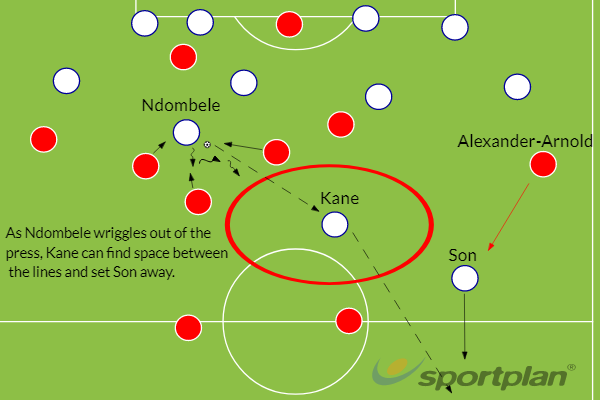 Manchester United and Southampton recorded wins against Liverpool recently by firing longer passes over the top, with Danny Ings, Marcus Rashford, and Mason Greenwood all scoring goals via this method. Mourinho will have taken note.

HOW LIVERPOOL CAN REGAIN GOALSCORING TOUCH

Liverpool's goalscoring issues also stem from losing Fabinho and Henderson from the midfield. These two helped Klopp's side enact wave after wave of pressure, sustaining attacks for long enough to wear the opposition down and force the ball into the back of the net.

Without them penning the opposition in, Liverpool are engaged in more territorially even contests and those fine margins of victory (13 of their 24 league wins prior to being crowned champions last season were settled by a single goal) have disappeared.

But the 3-2 defeat to Manchester United offered some green shoots to recovery. Most importantly, Roberto Firmino looked back to his best, spraying wonderful passes and interacting neatly with Mohamed Salah, and although Spurs will not be as open as United the regained confidence will do a world of good.

If Klopp's right-sided attackers are back in form then they will relieve some pressure from Sadio Mane and Andrew Robertson, two players who continue to look sharp but have been over-burdened in January. A threat from both flanks would stretch Spurs and create more space on Tottenham's right – which is the area Liverpool must target.

Serge Aurier remains vulnerable and prone to positional errors, making his head-to-head with Mane a potentially fruitful one – just as it was in the reverse fixture back in December. 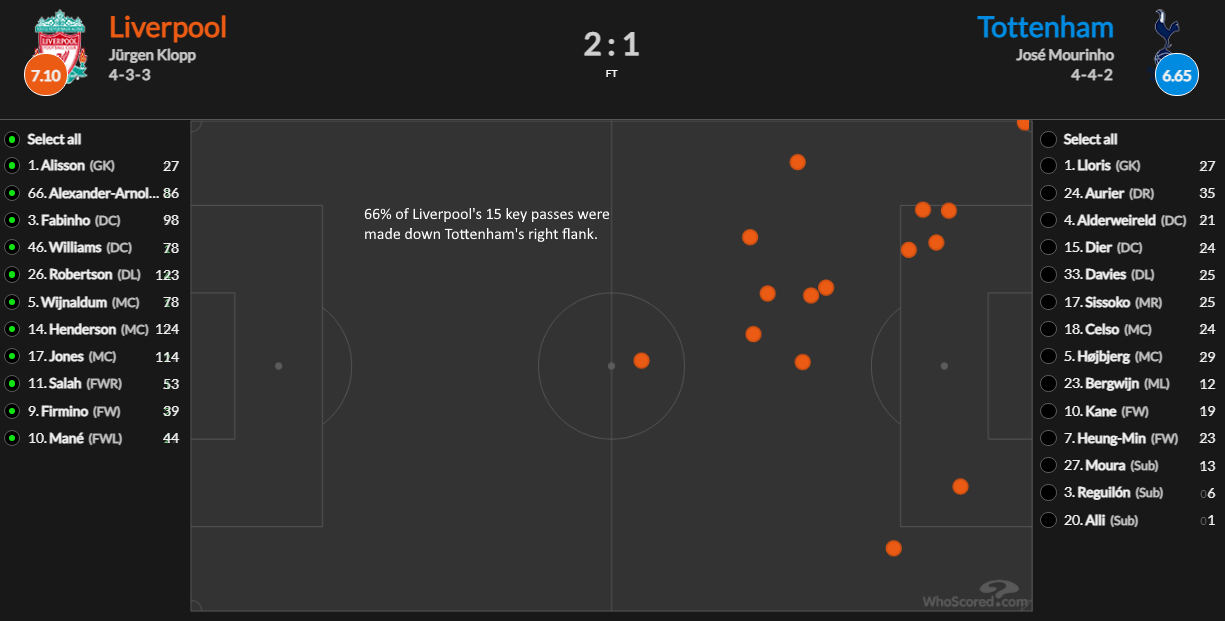 LOW-SCORING GAME TO BE EXPECTED

This is an optimistic tactical preview of Thursday's game. Mane schooling Aurier or Kane whipping through balls behind the Liverpool defence are relatively unlikely given that both Klopp and Mourinho would settle for a point.

For the hosts, Kane and Son have slowed down recently and Mourinho will be too keen on setting up in a low block to give either player much room on the counter. For the visitors, Klopp will probably drop his defensive line a little deeper and instruct both full-backs to show caution.

Another frustrating 'Big Six' 0-0 is on the cards.