The Premier League title race is surely over. Manchester City's defensive issues mean they will lose at least a couple more games this season, and so Liverpool – now holding a nine-point advantage – can probably afford to lose as many as five of their final 26 Premier League matches (19%). Given their extraordinary consistency over the last 50 league games, it will take a serious collapse for Liverpool to lose it now.

Pep Guardiola takes the blame for a surprising flat 4-4-2 formation at Anfield that did nothing to stop Jurgen Klopp's full-backs from dominating the match - leaving Man City all the way down in fourth as we enter the international break. Leicester City's easy 2-0 win against Arsenal and Chelsea's victory over Crystal Palace has seen them to second and third in the table as an eight-point gap opens up between the top four and rest.

There were several crucial problems with Guardiola's chosen system at Anfield on Sunday. His flat 4-4-2 didn't offer much protection to either Kyle Walker of Angelino, allowing the hosts' full-backs to dominate via long diagonals into the channels – leading directly to all three goals. Raheem Sterling and Bernardo Silva aren't good enough defensively to track back in time and provide cover, especially not when Liverpool were so direct in getting the ball out wide.

This problem was exacerbated by Kevin de Bruyne's surprise selection alongside Sergio Aguero, because the Belgian was consequently absent in the transitions, preventing Man City from counter-attacking successfully. What's more, the visitors needed a third body in central midfield in order to cover the width properly, whereas with Mohamed Salah and Sadio Mane occupying City's too-narrow full-backs Trent Alexander-Arnold and Andrew Robertson were free to dominate.

Guardiola should have picked a 3-5-2 formation that would have allowed wing-backs to push up and close down the Liverpool full-backs, following a template that Sheff Utd and Man Utd created recently. This formation would also have given City greater numbers in central midfield while allowing Guardiola to use De Bruyne and Aguero together up front. 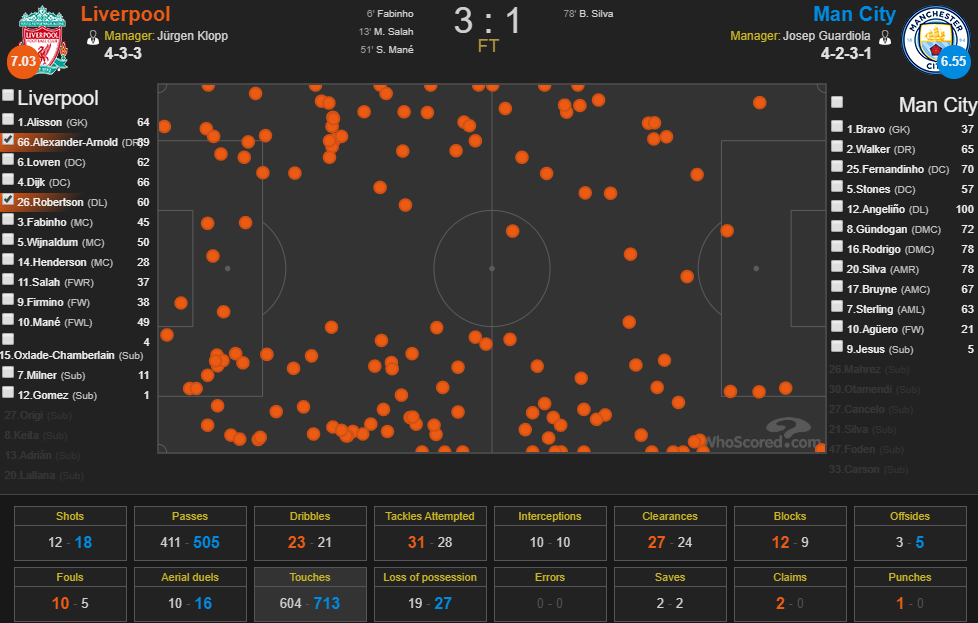 The best way to define Chelsea is by comparing them with the tactical strategies prominent about a decade ago, before Guardiola and Klopp had changed the landscape and when the Premier League was a simpler place. At the peak of Frank Lampard's powers, the dominant system was a 4-2-3-1 with inverted wingers linking up with a number ten.

This is how Willian and Christian Pulisic create overloads centrally with Mason Mount. The three players all drop into similar spaces between the opposition lines of defence and midfield, collecting the ball and running straight at the heart of the opposition. It is rather simplistic, but highly effective against mid-ranking clubs who are too frightened of Chelsea's risk-taking attacks to expose them on the counter-attack.

Jordan Ayew was completely isolated on Saturday as Crystal Palace dropped deeper and deeper before caving under the pressure. In time, teams will work out how to stop Lampard's side from dominating central attacking midfield, but until then Chelsea are uniquely entertaining.

3) Emery's unusual system does nothing to stop Leicester from dominating

Unai Emery used strange tactics even by his standards. A 5-2-3 formation at Leicester had Mesut Ozil as a false nine and Pierre-Emerick Aubameyang and Alexandre Lacazette as ineffective wingers, leaving just a two-man midfield to contend with the Leicester runners. Unsurprisingly, with the visitors sitting very deep, Arsenal were overrun in virtually every area of the pitch.

Aubameyang and Lacazette neither pressed nor cut off passing lanes, making them rather pointless and meaning the hosts easily got their midfielders and full-backs on the ball. Ozil similarly provided little defensive support, and so when Brendan Rodgers' side narrowed the pitch (Ricardo Pereira and Ben Chilwell cut inside) they simply overwhelmed Arsenal.

Youri Tielemans and James Maddison eased onto the ball, surging into space with quick one-twos, and although Arsenal's bizarre tactical setup did make them threatening on the counter this match was only ever going to end one way. Leicester's second typified the game; Tielemans tore through an under-stocked centre as Arsenal, in an unfamiliar shape and refusing to close down, simply folded. 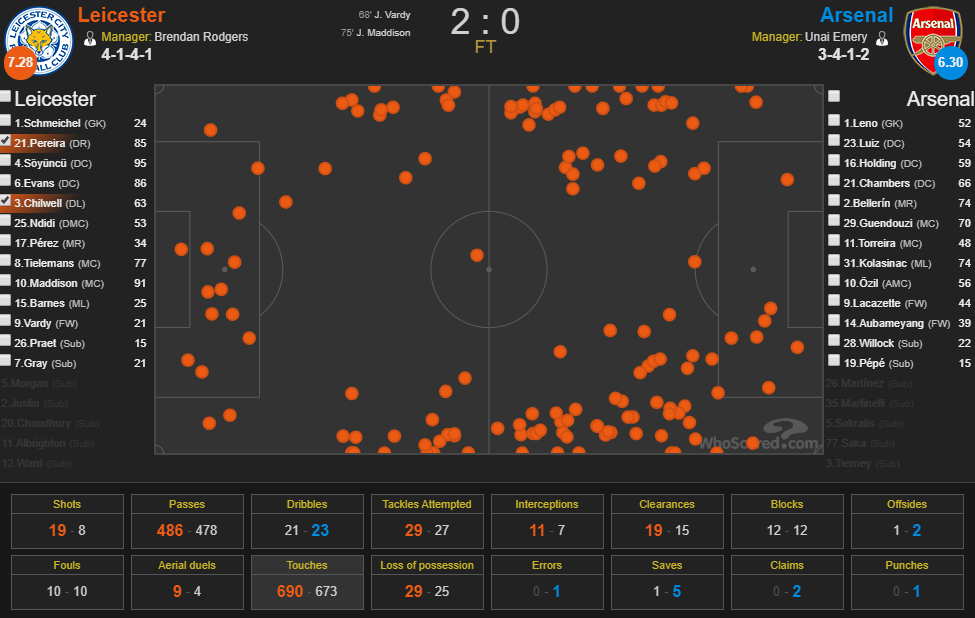 Quique Sanchez Flores has persisted with a 5-3-2 formation throughout his second tenure as Watford manager despite some disappointing results, and that persistence finally paid off at Carrow Road on Friday evening when the Hornets recorded their first win. It does appear as though consistency has led to greater organisation, although Watford were also clearly helped by the return to form of Will Hughes and by Etienne Capoue's recovery from injury.

Hughes linked with Gerard Deulofeu particularly well, creating more chances (three) than any other player on the pitch. Capoue was joint top of the charts for tackles (four) and interceptions (three) alongside Hughes; together these two picked Norwich's pockets, energising Watford at just the right moment. Norwich were again far too porous at the back.

November is normally a time of managerial casualties in the Premier League as the international break gives boards the opportunity to assess the first third of the campaign and make some tough decisions. Manuel Pellegrini and Ralph Hasenhuttl could both be out of a job following the directionless performances of West Ham and Southampton.

That Saints only mustered four shots at home to Everton speaks volumes; their 3-4-3 is far too defensive, with Nathan Redmond asked to do too much on his own. West Ham, who haven't won in seven and have a tough set of fixtures coming up, look just as stale. Pellegrini always uses the same 4-1-4-1, and the system has frankly lost its spark.