Wolves chief Olofinjana on Liverpool target Traore: He can leave

Agent of Porto midfielder Jesus Corona: We WILL talk to Chelsea

Another thrilling weekend of Premier League action saw four or more goals in no fewer than six matches, but there is no doubt which result grabs all the headlines. Norwich City's 3-2 win against the champions Manchester City was extraordinary and richly deserved; Daniel Farke's side were outstanding on and off the ball.

Elsewhere Tottenham rediscovered their verve on home turf, Watford took advantage of another confusing tactical setup from Arsenal, and Chelsea hit five in a new 3-4-2-1 formation. Here are three tactical things we learnt from the weekend action:

Farke's team were outstanding on Saturday, improving dramatically on previous Premier League outings by sitting deep and in a narrow 4-2-3-1. They have clearly learnt from their earlier openness, showing defensive resilience and discipline here in a midfield W-shape that meant the wingers cut off passing lines to David Silva and Ilkay Gundogan and their number ten Marco Stiepermann could mark Rodri.

Norwich left Man City's back four alone, refusing to press, which meant mostly aimless possession for Pep Guardiola's side; it was unexpectedly patient, for which Farke and his side deserve a lot of credit. On the ball, their calm short-passing out from the back successfully evaded the visitors' press and forced Man City to drop a bit deeper. They are not used to doing this, which explains their passive resistance in their own half for the first two Norwich goals.

The hosts were assisted by Guardiola's tactical mistakes. Leaving Kevin de Bruyne on the bench, they struggled to build from deep (Rodri and Gundogan were completely disconnected and David Silva sat too high up the pitch), while their best players Raheem Sterling and Bernardo Silva were harmlessly hugging the touchline. Man City were most dangerous on the rare occasions Sterling picked up the ball in the central column… and yet Guardiola's double substitution on the hour mark doubled down on width.

He told De Bruyne to move to the right wing and constantly swing crosses towards Gabriel Jesus and Sergio Aguero. Despite Norwich's aerial superiority and high number of bodies behind the ball Man City attempted 47 crosses – double their season average. 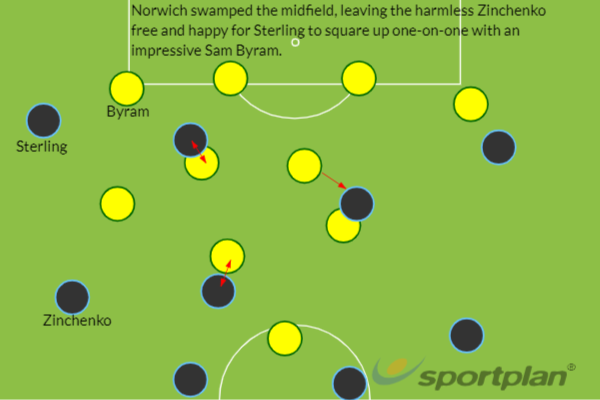 Gerard Deulofeu had an incredible 93 touches of the ball in the 2-2 draw with Arsenal, putting in his best performance of the season largely thanks to the visitors' use of a narrow diamond 4-4-2 formation. It was the second time this season Unai Emery has deployed the formation and the second time his midfielders had no idea what to do, leaving astonishingly large patches of grass out wide.

Considering Ainsley Maitland-Niles needs more help than most, it was a suicidal tactic; Deulofeu had the beating of him all match, and Watford were able to consistently feed the Spaniard because Abdoulaye Doucoure controlled central midfield. Mesut Ozil didn't press from the tip of the diamond, plus Dani Ceballos was unable to defend successfully and Granit Xhaka constantly drifted away from his base position.

Quique Sanchez Flores deserves praise for his in-game tactical decisions as the pattern unfolded. He brought Daryl Janmaat off the bench to make overlapping runs down the right, helping to earn the penalty for Watford's equaliser and set up a final 10 minutes in which Watford pummeled the visitors down that flank. 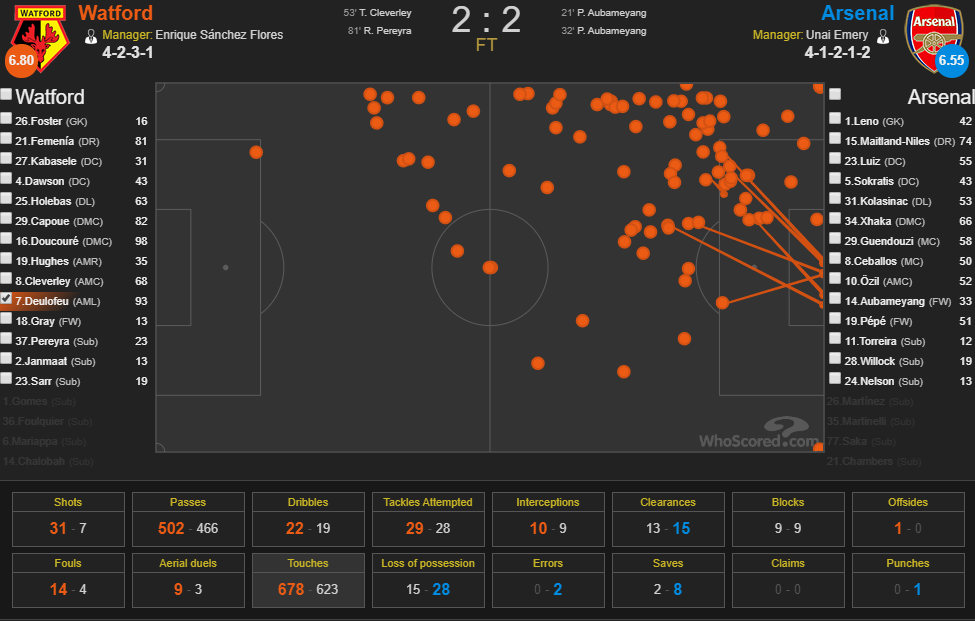 Tottenham's poor home form against deep-lying opposition has been a serious cause for concern over the last few weeks; the 1-0 home defeat to Newcastle United follows an inability to break down the likes of Brighton, Crystal Palace, and West Ham towards the end of last season. But Mauricio Pochettino's side emphatically ended these stagnant attacking performances on Saturday with Serge Aurier and Toby Alderweireld shining.

Aurier's directness from right-back and excellent fizzing crosses – earning two assists – were a reminder that Spurs need energetic full-backs for their tactics to work. Pochettino's emphasis on narrow attacking lines has always demanded a player like Kyle Walker to provide the width, and so Aurier's performance this weekend was timely. He must feature more regularly this season, especially against bottom-half clubs.

Alderweireld played 15 long passes, his first few of the afternoon pinpoint balls over the top for Son Heung-Min to force the Crystal Palace defence to backpedal and fall out of their shell. This assertiveness and verticality from the outset gave Spurs an urgency they have so often lacked in these sort of fixtures, inspiring the crowd to lift the mood inside Tottenham Hotspur stadium. Spurs have finally woken up.

Frank Lampard used a Conte-esque 3-4-2-1 formation on Saturday in order to counteract Wolves' 3-5-2, a formation that provides a numerical advantage in defence, midfield, and attack against a 4-3-3. However, following an assured performance Lampard may decide to stick with this system for the time being.

Having a third centre-back eliminated some of their defensive concerns; Fikayo Timori could step out to meet countering Wolves midfielders, helping close the gaps in midfield that have plagued Chelsea this season (they seem incapable of transitioning from attack to defence). Cesar Azpilicueta and Marcos Alonso (or Emerson) are vulnerable defensively, too, meaning they clearly benefit from the extra defensive cover in a 3-4-2-1.

Further up the pitch Mason Mount and Willian combined well in the inside forward positions to provide Tammy Abraham with close support, while N'Golo Kante – when he returns from injury – will prefer playing in a two-man central midfield.

Leicester City were punished on Saturday for failing to pick their most attacking line-up as Brendan Rodgers continued his use of two defensive midfielders in tough away games. Manchester United were there for the taking, but Leicester could not build momentum. Hamza Choudhury isn't assertive in possession and James Maddison, drifting in from the left flank, had no left-wing option to pass to – only an under-performing Youri Tielemans.

The lack of options was disappointing to say the least. United were able to float pretty aimlessly through a match that never really got going, winning via a penalty conceded by Caglar Soyuncu - who is struggling to adapt to English football. Leicester missed the chance to lay down a marker at Old Trafford. If they want to finish top four then Rodgers needs to approach matches with the mentality of a top-four team – by trusting his attacking players.