The 1-1 draw between Manchester City and Liverpool on Sunday evening was the breathless tactical battle we have come to expect from Pep Guardiola and Jurgen Klopp. The result meant little has been decided in terms of the title battle, with City only two points behind Liverpool if they win their game in hand against Aston Villa, but deeper analysis of what happened at the Emirates brings a different conclusion.

Liverpool's unusually aggressive system, and Man City's struggle to play with fluidity as a result, suggests Klopp's side hold a major advantage in the title race.

Klopp sprung a huge surprise with a remarkably attacking 4-2-4 formation; Roberto Firmino did not drop deeper than Mohamed Salah but stayed alongside him, while Diogo Jota and Sadio Mane were as high up the pitch as they would have been in a 4-3-3. Given that Man City were essentially in a 4-4-2, as Kevin de Bruyne sat up in line with Gabriel Jesus, that meant only four players occupying central areas of the pitch – hence the wild contest in the opening half.

Liverpool dominated for large parts. Jota, Salah, and Firmino all dropped intelligently into the number ten space, arriving on the blind side of Rodri and Ilkay Gundogan, and by doing so exposing the issues with City's sluggish double pivot. Neither player has the agility or anticipation to cope, and so Liverpool were able to drive forward with menacing intent, leading to the penalty and opening goal.

Equally importantly, Liverpool's shape became a 4-4-2 when City had the ball, with Klopp instructing his players to drop off the centre-backs (hence City's possession dominance) as Firmino and Salah focused on cutting off the passing lines into Rodri and Gundogan. This led to stale passing between the centre-backs and Rodri, with no progressive pass available; City moved the ball from side to side, and as Liverpool's wingers got tight to the full-backs Guardiola's side had no vertical option.

This exposed a creativity issue that threatens to derail City's season. Guardiola often used Rodri and Gundogan together at the base of midfield but neither player has the skill to dribble past a player or cut an intelligent forward pass, which leads to the passivity and dearth of creativity that has undermined the club in 2020/21. Liverpool's 4-4-2 found it far too easy to cut off the supply line to Kevin de Bruyne. 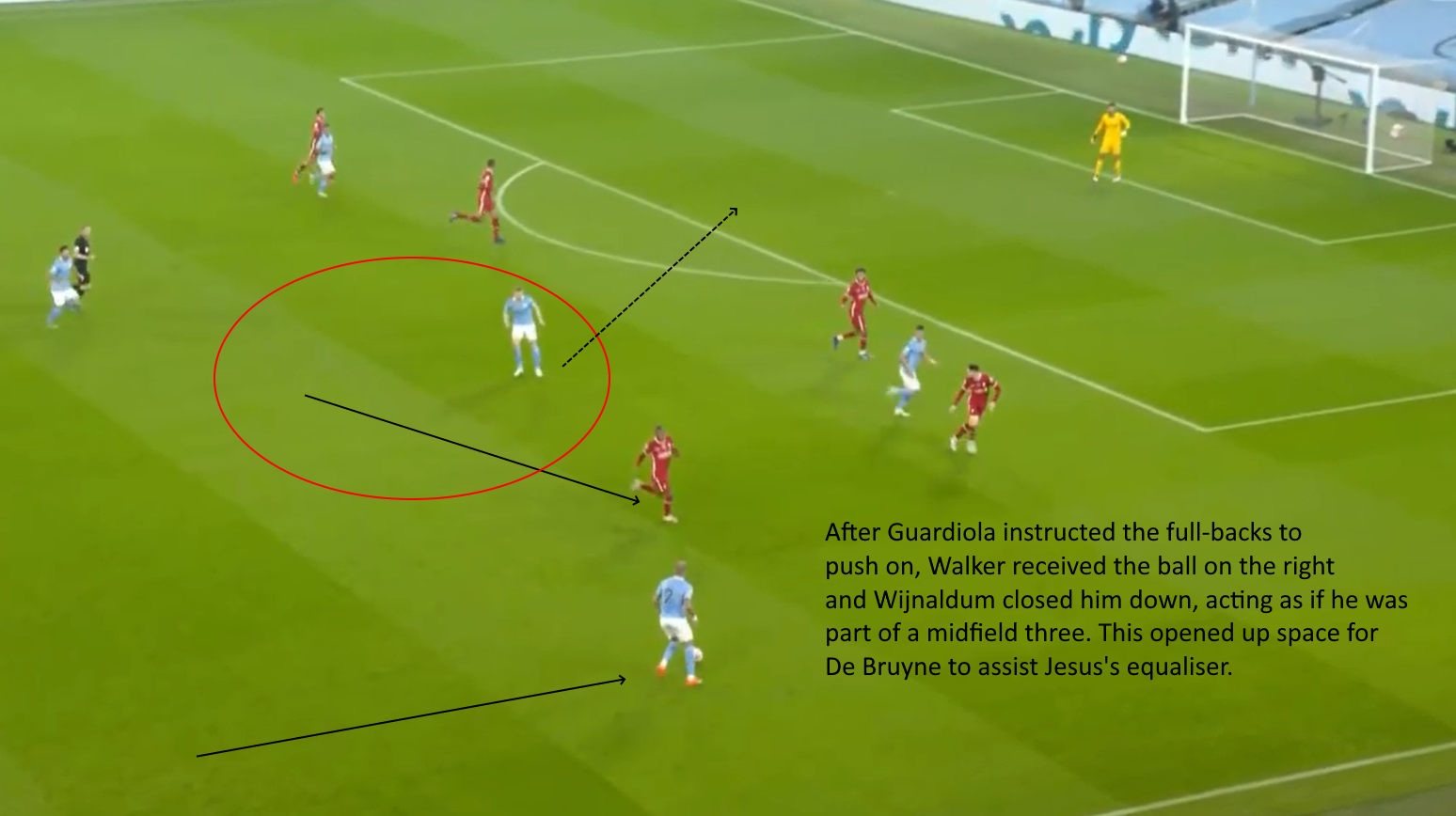 However, as the first half went on City began to get a foothold as De Bruyne worked out how to manipulate the Liverpool midfield. Having just two men in the middle meant De Bruyne could float across the width of the pitch and find space, and thanks to Guardiola's tweak the Belgian began to dictate things.

Gundogan came deeper to get on the ball, plus the two City full-backs moved higher up the pitch, ahead of Liverpool's front four and wider than them – which created a new passing angle into the flanks. From here, they got De Bruyne more involved, leading to Gabriel Jesus's equaliser.

De Bruyne received possession in midfield as a direct consequence of Liverpool's unfamiliar formation, following a venture down the right from Kyle Walker. Georginio Wijnaldum sprinted out to City's right flank to close down the ball and cover for Mane, in doing so acting like he was part of a three-man midfield. But without his own cover, Wijnaldum had left a hole for De Bruyne to set up Jesus. 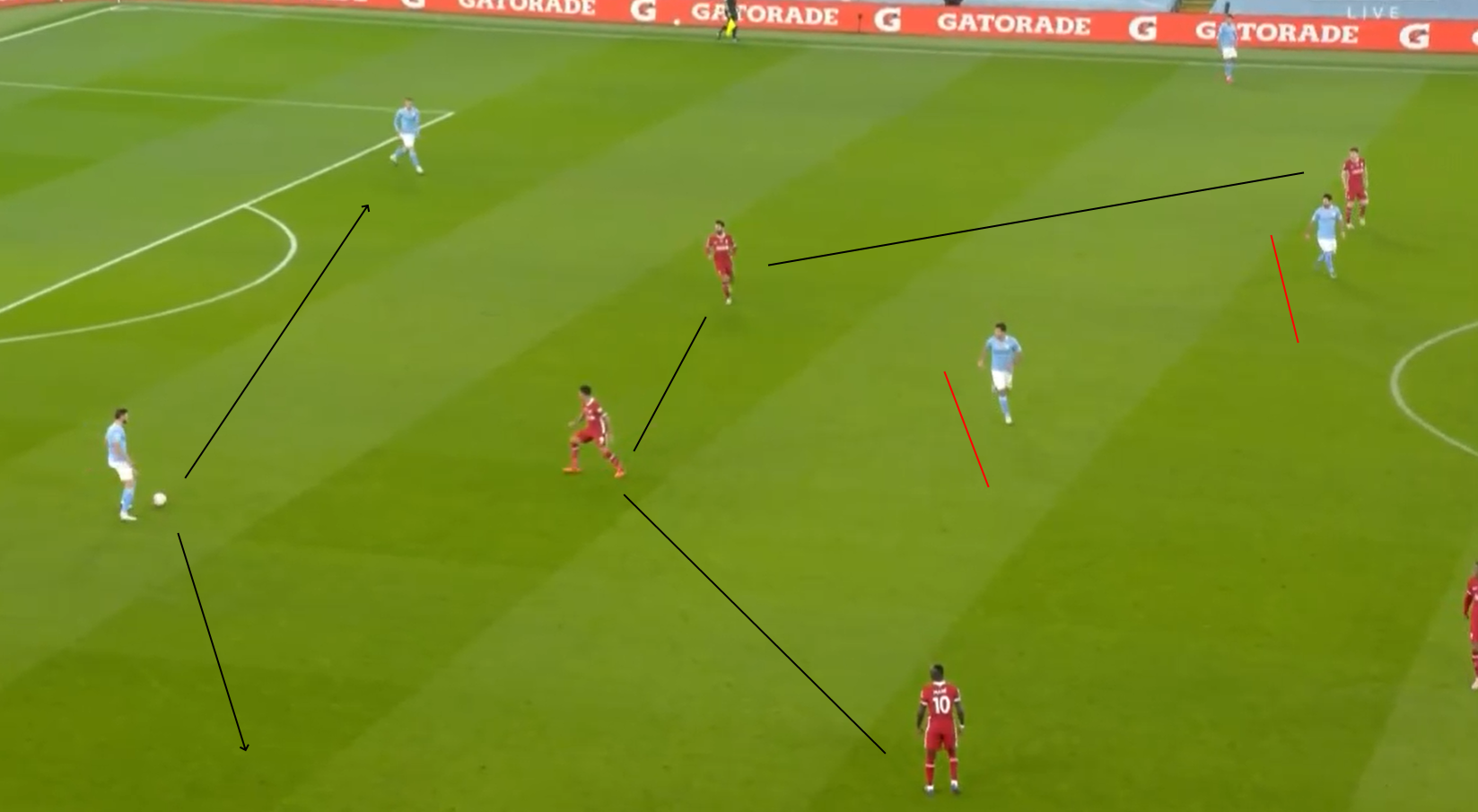 Second half shows how fitness issues are impacting both clubs

De Bruyne's growing influence, via the full-backs, might have spooked Liverpool a bit, and although Klopp bravely continued with his 4-2-4 formation the visitors were less aggressive in the second half. In fact, the match slowed down significantly as it became clear both managers were satisfied with a point, although Klopp's complaints after the match about fixture congestion tell a slightly different story.

Clearly his team were simply unable to maintain the tempo of that blistering opening 30 minutes, in which the yo-yoing movement of Jota, Firmino, and Salah pushed City back and had their midfield looking lost. Tiredness affected both sides, resulting in a tame second 45 that could not live up to the first.

Another tactical concern for Man City was how easily Liverpool were able to play long balls over the top of their defence in those early moments of the game, getting the front four on the ball and pushing the hosts back. This further highlighted the biggest problem facing Guardiola this campaign: his side's pressing has dropped considerably.

Without constant pressure high up the pitch, City's opponents have the time and space to pick long balls forward that catch out the high defensive line. This passivity off the ball is matched by passivity on it, at least when Gundogan and Rodri are picked together at the base of midfield, and these two interrelated flaws are further exacerbated by the fact De Bruyne is the only attacker currently in form.

All in all, Man City look like they are fading away, the lights dimming on an extraordinary and explosive era under Guardiola. By contrast, Liverpool's tempo is increasing as the weeks go by and the memory of the 7-2 defeat to Aston Villa diminishes. Here, for 45 minutes at least, they had the same energy and cohesion that has defined them throughout the last two years.

There may only be a few points separating them in the Premier League table, and they may have drawn on the night, but these two teams are not equals at the moment. Liverpool are ramping up their focus. Man City still look dazed.