Chelsea defender Rudiger: I saw the dark side of life in Berlin

Arsenal whiz Smith Rowe told: Aston Villa move would be good for you

Man Utd midfielder McTominay on Neymar clash: He grabbed me; his head had gone

Talking Tactics: How Arteta turned Arsenal season around over Christmas

Back-to-back Premier League wins for the first time since the opening two rounds of the 2020/21 season has halted any lingering fears of a relegation battle – and put Arsenal as close to the top four as the bottom three.

A nine-point gap to the Champions League spots makes a full recovery highly unlikely, but nevertheless Mikel Arteta has every reason to believe his team are through the worst of their disastrous beginning to the season.

It has been a harrowing few months for the Spaniard, but a steep learning curve is rarely a bad thing. He will emerge from it a considerably better manager.

Arteta began his managerial career with a Guardiola-like obsession with structure and control, quickly instigating a fine-tuned tactical shape that saw Arsenal build up the pitch with a precision that appeared to show he had a bright future at the top of the game.

But when he hit the first major stumble, at the beginning of 2020/21, that need for control became a hindrance; the Arsenal players lost confidence and suddenly the careful scaffolding of the team shape felt like chains. It left confidence-stricken players cowering in their set zones, passing sideways and failing to show any creativity.

That is the inherent danger in the Arteta approach: ultra-tactical discipline can give players the foundation to control the tempo of matches and dominate, but when hesitancy and low self-esteem creep in the team lacks the individualism to turn the tide.

ARTETA LETS GO OF THE CONTROL

Credit to the Arsenal manager for realising this, even if it did take him quite a long time to reach the conclusion things needed shaking up; that his players needed to be given the freedom to play in an unstructured way in order to unclog the psychological problems that had taken hold of the team.

He began by throwing things at the wall and seeing what would stick, moving to a 4-2-3-1 and back to a 3-4-3 over recent weeks, involving several Europa League players as well as shifting Bukayo Saka – the team's outstanding player this season – into various different positions in the hope he can have a greater influence in the final third.

It was all a little chaotic, and a little desperate, but as Arsenal now emerge from their rock bottom Arteta will feel vindicated for having let go of control. Over the last few weeks, Arsenal have looked as wild and individualistic as a team without a tactician in the dugout, and, in the short-term, that is a good thing. 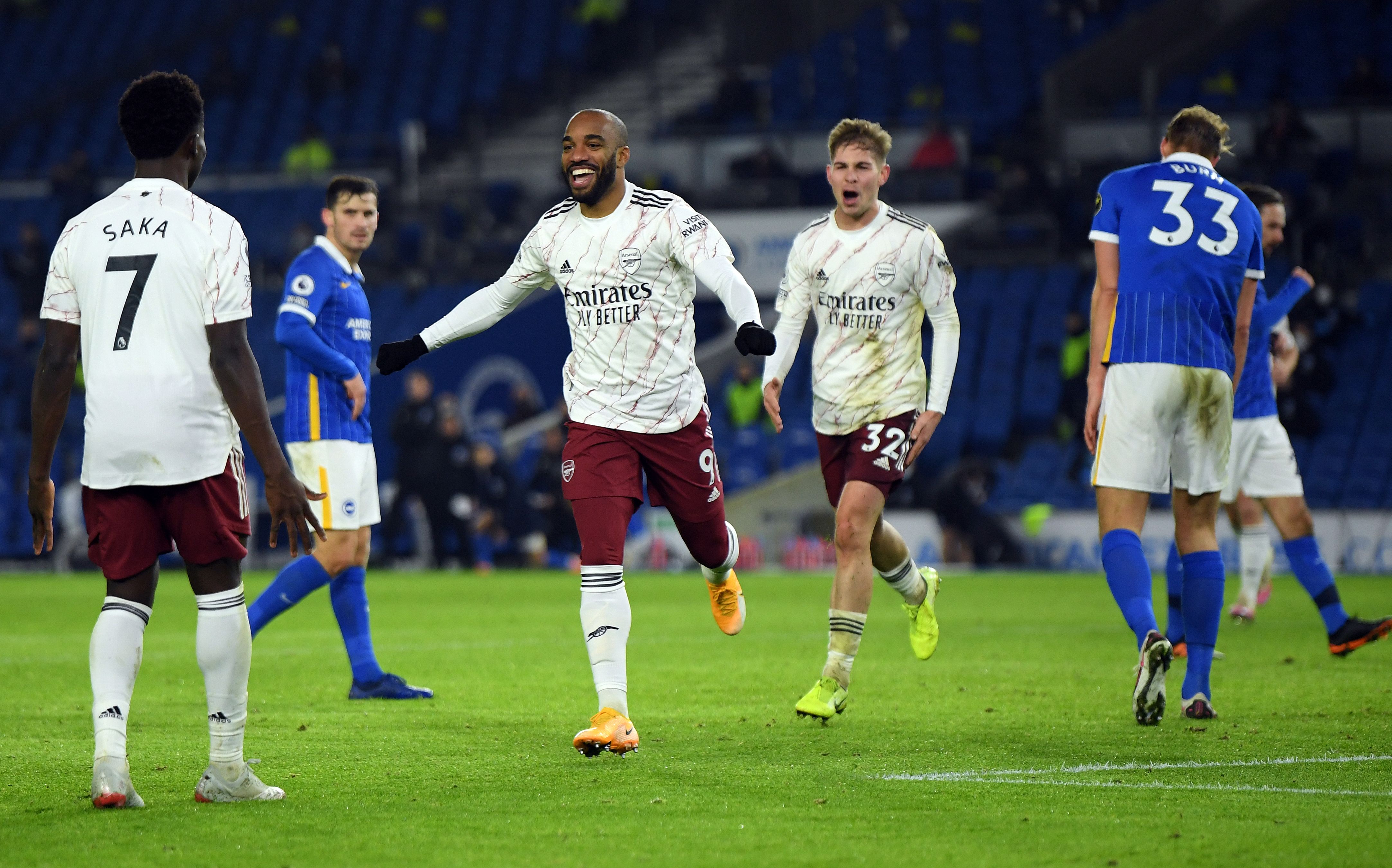 But Arteta has finally settled on a system that is working, a 4-2-3-1 with Emile Smith Rowe as the fulcrum, flanked by Saka and Gabriel Martinelli.

The biggest impact of the system change, as seen in the 3-1 win over Chelsea, is a dramatic increase in pressing from the front. Whereas tired and fearful senior players had slowed right down, making Arsenal passive and easy to break through, the buzzing energy of youth allowed the Gunners to push up onto the Chelsea centre-backs.

Frank Lampard's side struggled to play with any rhythm as Arsenal diligently pressed in a Bielsa-like man-to-man system, gradually slowing Chelsea down until their performance drew harsh criticism from pundits perplexed by their lethargy and decompression between the lines. They were simply out-run and out-fought by an Arsenal team able to both press high and quickly fall back into a low block when Chelsea managed to work into the final third.

Arsenal's off-the-ball work was matched by energy – by purposefulness – on the ball. Smith Rowe dropped expertly between the lines into classic number ten positions, giving the Arsenal midfield a line-splitting passing option that made the whole team more vertical and progressive.

It was a pass that has been badly lacking this season, a consequence of Arteta's relatively flat 3-4-3 formation and the inability of either wide forward (Pierre-Emerick Aubameyang, Nicolas Pepe, or Willian) to drop into the ten zone. Smith Rowe delivered urgency by popping up in useful space to receive a forward pass, and on the half-turn too, encouraging Martinelli, Aubameyang, and Saka to make purposeful runs as Smith Rowe opened his body up.

However, the biggest impact of having Smith Rowe, Martinelli, and Saka together in attacking midfield is that all three players can play quick passes around the corner, searching for the incisive flick that triggers a counter-attack. These were vital in setting a new high tempo against Chelsea, and an even greater example of their effectiveness came in the second half of the 1-0 win over Brighton.

After a sluggish first 45, something Arteta said at half-time clearly inspired the young players to spark into life. Smith Rowe, receiving the ball centrally with his back to goal, played a superb one-touch pass around the corner to release Saka, and within a few seconds Arsenal had a clear-cut scoring chance.

This pattern repeated for 20 minutes as Smith Rowe, Martinelli, and Saka attempted deft forward touches, spun in behind, and counter-attacked with venom: their energy, and talent, have given Arsenal a penetrating quality. In the 66th minute the winner came courtesy of a brilliant turn and driving run from Saka.

Arsenal's urgency, on and off the ball, is back thanks to Arteta's trial-and-error approach to solving the issue of being strangled by too much structural detail. Counter-intuitively, with a new system now established the Spaniard can once again begin to implement detailed structure into the team's possession and re-instate some of the automatisms in their attacking interplay that have disappeared this season.

This time, Arteta will need to find a more delicate balance between control and freedom; will need to both define clear tactical boundaries while leaving room for his players to crash through them.

NEXT STEPS: THE XHAKA-ELNENY COMBINATION

Like Guardiola with Rodri and Ilkay Gundogan, Arteta is still clinging onto control of the midfield battle by deploying two hard-working metronomic players who badly lack verticality in their play. Mohamed Elneny and Granit Xhaka continually slow things down, leading to static possession that ultimately brings sluggish performances – as in the first half against Brighton.

For Arteta to complete the lesson in loosening his grip, he needs to start trusting Dani Ceballos in the middle of the park. The best teams in Europe do not sacrifice dynamism in central midfield for greater control. Arsenal and Arteta must not aim lower than that, and with Ceballos and Saka capable of playing in a box-to-box midfield role there is no excuse not to play a more adventurous style.

It has been a humbling few months for Arsenal's novice manager. But he emerges from it a better coach; wiser and more experienced for having seen the shortcomings of a purely theoretical approach to football.

What Arteta has learnt mimics the adaptations Guardiola had to make in his first season in England, when an obsession with 'second balls' became shorthand for working out how to deliver immaculate tactical sophistication in such a wild and physical division.

It is the footballing equivalent of a student learning a vocational skill from textbooks before being sent out on placement in the real world. It's always a shock, always a period of major adaptation, and always a learning period from which the student emerges considerably more experienced and talented.

Arteta has survived the festive season. He will be a better manager for it, and Arsenal, in the long run, a better team.