As we scramble for some narrative certainty amid a chaotic start to the 2020/21 Premier League, Arsenal are fast becoming the most difficult of the 'Big Six' to label.

Few people anticipate Mikel Arteta's side being ready even for a top-four challenge, and yet rivals Tottenham Hotspur are viewed as outsiders for the title. Just two points separate them.

Perhaps Arsenal would be getting more credit for their progress if Arteta's order of focus was reversed. He is clearly targeting defensive improvements first, aiming to create a solid foundation of control before freeing them up creatively. Unsurprisingly, this leads to fewer headlines than those generated by the Harry Kane and Son Heung-Min partnership or by Gareth Bale's heroics.

But a sophisticated and controlling 1-0 victory over Manchester United at Old Trafford, Arsenal's first away win against a 'Big Six' club in 29 attempts, has refocused attention on the razor-sharp tactical vision of their young manager.

Arteta is quietly building something special in north London. Sunday's win was symptomatic of the progress he has made, as well as the obstacles that are still to be overcome.

Ole Gunnar Solskjaer's decision to stick with the diamond 4-4-2 that beat RB Leipzig 5-0 backfired, with the Arsenal players clearly informed by their manager how to poke holes in United's new formation.

The most important method in a dominant first half was the use of under-lapping wing-backs, with Hector Bellerin and Bukayo Saka regularly dipping into the half-spaces in order to receive the ball in spaces either side of the hosts' narrow diamond midfield. Scott McTominay and Paul Pogba had no idea how to move wide enough to mark the wing-backs without losing their shape, which allowed Arsenal to outnumber and dominate down the flanks.

Although Solskjaer switched to a 4-2-3-1 at half-time the pattern of the contest had been set and United's midfield was too shaken to recover. Arsenal dominated throughout, thanks in part to an aggressive high-pressing strategy that took advantage of United's lack of pre-structured passing moves. 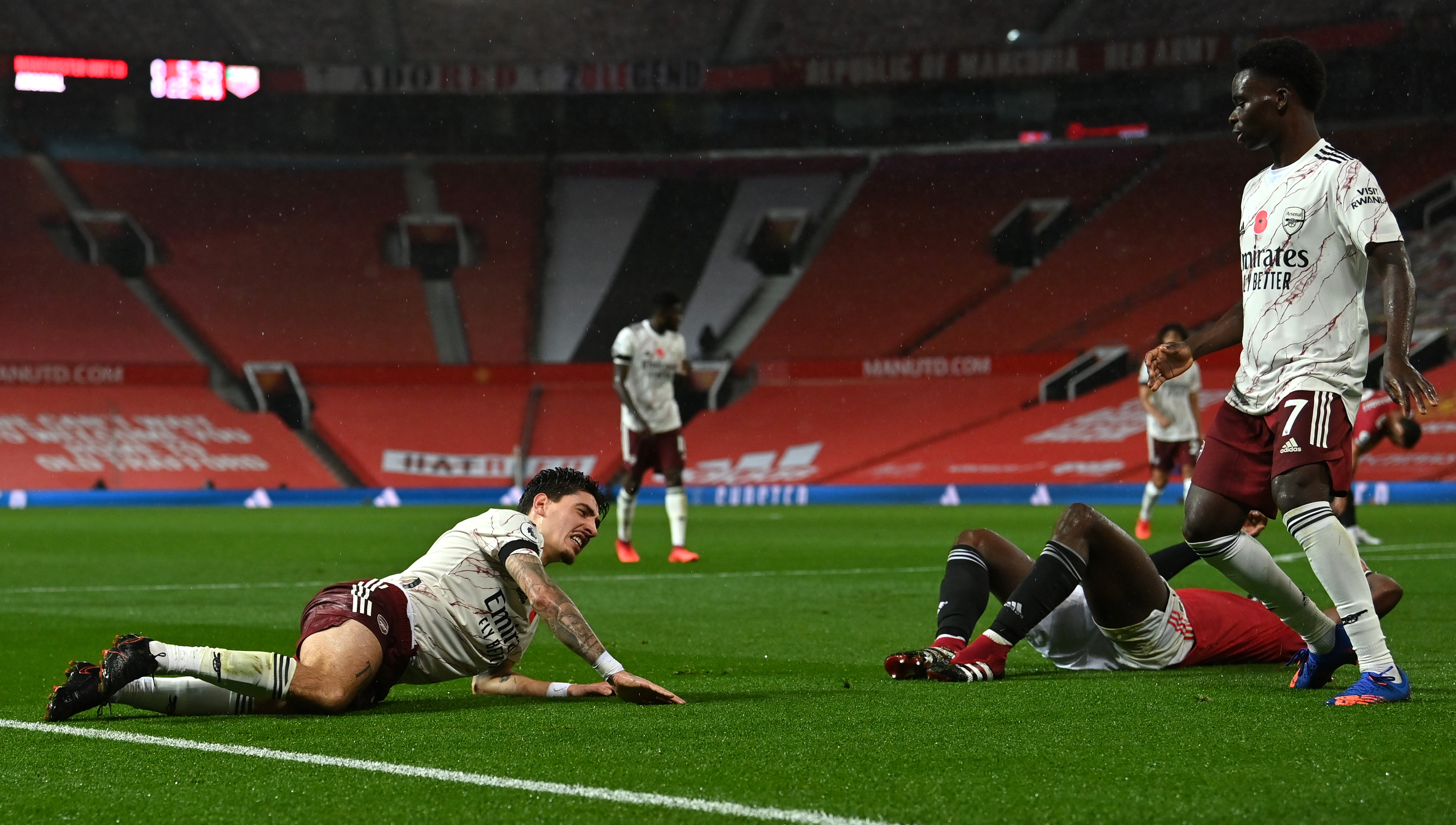 GABRIEL AND PARTEY TAKING TEAM TO NEXT LEVEL

The biggest takeaway from the game was the leadership and defensive quality shown by man-of-the-match Gabriel Magalhaes. The 22-year-old centre-back was outstanding, chiefly in stepping confidently out from the back three to meet Fernandes or Rashford as the ball was played into feet, a high-risk strategy that repeatedly pushed United back and helped Arsenal win the vital physical and psychological battle.

Gabriel was also dominant in the penalty area – completing five tackles, eight interceptions, and seven clearances – while constantly barking instructions at his team-mates. One of the biggest criticisms levelled at Arsenal in recent years has been an absence of leadership. Here, Gabriel showed he can be the defensive organiser needed to propel Arsenal back to the top.

The same can be said of Thomas Partey, a commanding and combative presence in central midfield who is rightly being compared to Patrick Vieira. Partey's anticipation and defensive instincts give clout to a passive midfield, yet it is his technical ability – a driving, line-breaking presence – that really defines his game.

That can help Arsenal create more chances in the long-term and give the Gunners the marauding, press-evading box-to-boxer that every elite clubs needs in the modern game. Together, Partey and Gabriel give Arsenal technical, tactical, and physical power.

The United win was, once again, the result of Arteta's clever hybrid 3-4-3/4-3-3 formation, in which there are seemingly too many moving parts for opponents to fully track. Saka is the key player in the system, drifting into central midfield to free up left centre-back Kieran Tierney to overlap and flip the formation into a back four, although Pierre-Emerick Aubameyang (making diagonal runs) and Hector Bellerin (alternating inside and out with Willian) are just as malleable.

The formation changes multiple times based on the position of the ball, and indeed when United had possession in their own half Arsenal were regularly pressing in a 4-4-2, with Aubameyang staying central in order to cut off the passing lines into midfield – and to be stood in a dangerous position should the visitors win back possession.

None of this was new for the trip to Old Trafford, but it still deserves attention. Not enough is being said or written about the complexity of Arteta's tactics, or indeed how intelligently his players are absorbing the ideas.

HOW TO SOLVE CREATIVE ISSUES

The lack of real hype about Arsenal is, of course, because of their on-going creativity issues, a symptom of Arteta's focus on defensive resolve and a compact shape for the time being; they boast the Premier League's best defensive record, with seven goals conceded, but have scored the joint 12th most, with nine.

One reason for this flaw is Arteta's 3-4-3, which can be too flat between the lines, isolating the front three from central midfielders who lack creativity. Perhaps Dani Ceballos will be given another chance to shine in the middle once Arteta is confident in their defensive strength.

However, more likely this will continue to be a problem for Arsenal until they sign a new wide playmaker, in the mould of Eden Hazard, who can sit on the left and allow Aubameyang to move back into the middle. Arsenal badly lack line-breaking creativity from the flanks; that unpredictable figure who will work in opposition to the rhythmic passing of his team-mates. The pursuit of Philippe Countiho suggests Arteta is aware of the issue.

Until then, improvement in the final third will only be gradual – but that does not mean a disappointing campaign. The organisation of their defensive shape, the aggression in a press now led by Gabriel and Partey, and the skill in their hybrid formation suggests Arsenal are definitely in the running for a top-four finish.