England have been pitch perfect at Euro 2020 but that may be about to change. They are a notable outlier among the final four, recording a shot count (7.2 per game) and average possession (52.8%) considerably below the other contenders. Gareth Southgate's side are grinding out the wins with clean sheets, and as they come up against a rampant Denmark the England manager's tactical approach will either be vindicated or shown to be just too negative for the prevailing aesthetic of the tournament.

And it really could go either way.

Denmark have shown a hunger and cohesiveness at Euro 2020 that many have attributed to the psychological impact of Christian Eriksen's collapse, although in truth this is just a good team being coached well. Kasper Hjulmand is showing a tactical flexibility and in-game management to rival any coach at the tournament, and a very strong core – all peaking this summer – has given them the platform for aggressive, high-energy football.

England enter the game as favourites but there are some huge roadblocks in the way. Here's a look at the key tactical notes to look out for on Wednesday night:

Denmark's xG of 9.1 is the second highest at the tournament, reflecting the assertiveness and positivity of a side that have consistently been underestimated by their opponents. They also rank in the top five for ball progressions, indicating the directness and verticality in the team – which comes from Pierre-Emile Hojbjerg in a more advanced role than we see at club level, from an aggressive front three, and from left wing-back Joakim Maehle.

Maehle ranks second in the tournament for dribbles attempted, behind Kylian Mbappe, and third overall for ball progressions. England will need a special plan for the most piercing Denmark attacker of all, and yet arguably Southgate's conservatism is just the way to nullify the threat. Assuming England return to a 3-4-3 for this game – and considering they mirrored Germany's back three in the second round this seems likely – then a safe midblock, minimal pressing in the opposition half, and compression between the lines can slow Denmark right down.

As part of this strategy Kieran Trippier is likely to stay deep and pay close attention to Maehle, while Hojbjerg's forward runs and the narrow Denmark front three can be shepherded by England's tight defensive unit. So far, nobody has paid this attacking Denmark side the respect of cautiously stepping off, and by doing so England may end up holding all the cards.

However, a 3-4-3 risks creating a nervy contest that might favour the more care-free and fearless of the two nations, and in front of 60,000 fans at Wembley Southgate may risk a sterile, frozen performance with this formation. What's more, sticking with the 4-2-3-1 used against Ukraine could expose Denmark's main tactical flaw: a lack of bodies through central midfield.

Belgium and Czech Republic have both found joy against Denmark when hitting through the middle, because once the Danish press is evaded and the first line broken they suddenly have too few players in the centre of the park. Their two-man midfield can look stretched, just as Belgium's did against Italy in a similar 3-4-3 formation. That is the inherent risk of the system when deployed with a high line and assertive press, and why England only deploy it when happy to sit off.

Consequently if Southgate does pick the 4-2-3-1 with Mason Mount central, England will naturally form a three-on-two through midfield. Coupled with Raheem Sterling drifting infield from the left to provide a vertical passing option to Declan Rice and Kalvin Phillips (as he did superbly against Germany), England will have a numerical advantage that allows them to build comfortably through the middle of the pitch. 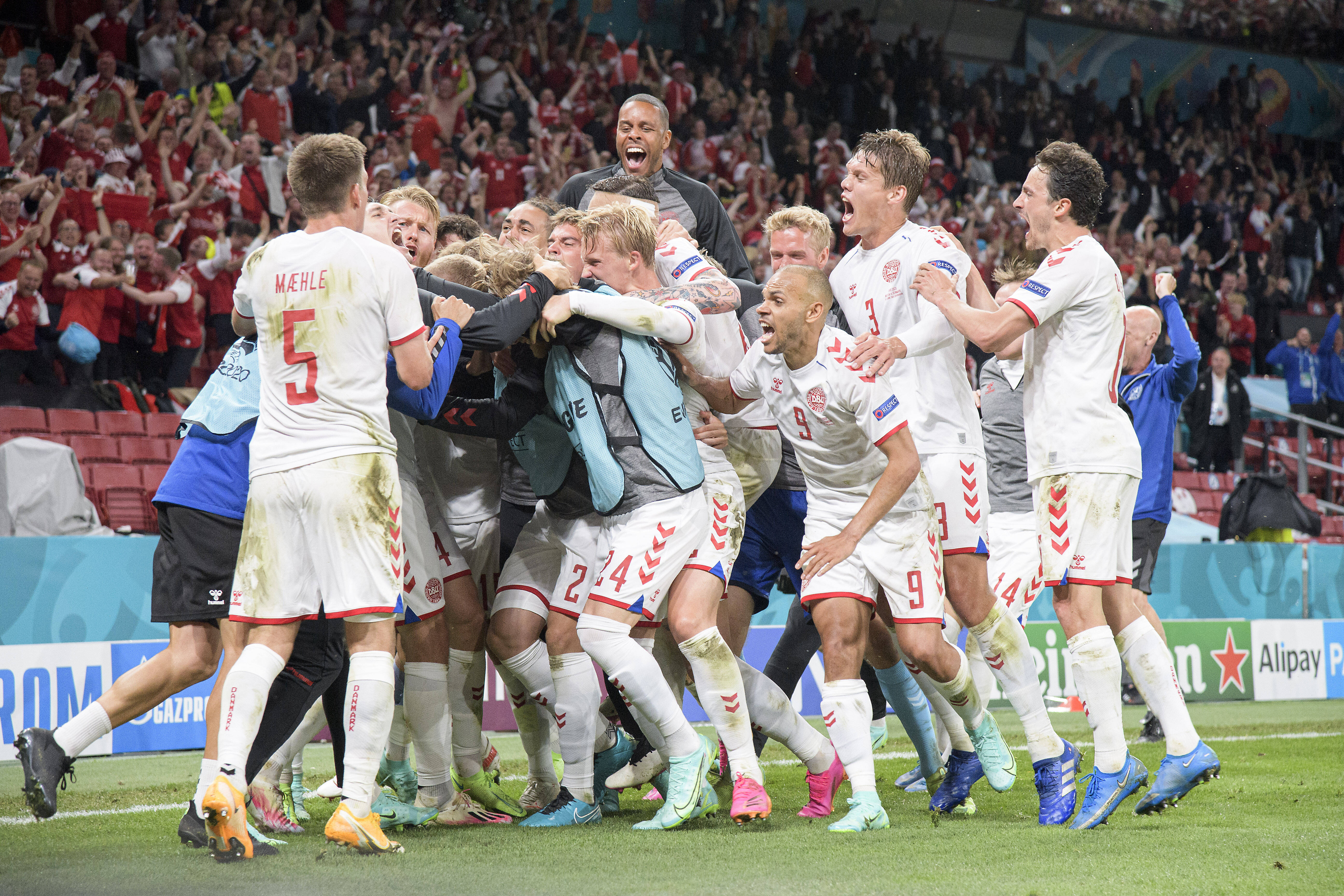 There are merits, then, in either England approach. But picking one system over the other is made particularly difficult by Denmark's own tactical flexibility. Against Czech Republic Denmark switched from 3-4-3 to 4-3-3 mid-game, with Andreas Christensen stepping out into central midfield to shut down those attacks through the middle of the pitch. Hjulmand made the same change against Wales, but the difference in the quarter-final was that he changed again, to a 3-5-2, in the latter moments.

England cannot accurately predict how Denmark will look to manage the game, which creates its own selection headaches – especially up front. Starting Jadon Sancho or Bukayo Saka risks England being too wide to deal with Denmark's possession game, and yet to play Mount or Phil Foden on the right could mean England lacks the counter-attacking pace required to take advantage of Denmark's high line.

There are no obvious options, but the safest call would be to move to the defensive 3-4-3 used against Germany with Raheem Sterling and Saka either side of Harry Kane.

Finally, the strength of Denmark's back three is a concern for England's forwards whatever the formation. This will be a tight game with few clear chances for either team, and up against a compressed blockade of Chistensen, Jan Vestergaard, and Simon Kjaer England will need Kane to be sharp.

His run for the opener against Ukraine was crucial in setting the tone for the tie, and that ability to pounce on any vulnerability, to turn sharply in the penalty area and steal half a yard, will be more important than at any other point in the tournament. Denmark will give nothing away. England, for the first time at Euro 2020, face an opponent with the defensive strength, confidence, and discipline that matches their own.