The brief two-day fallow period in the middle of Euro 2020 gives us the chance to look back on the group stages of the competition and assess the tactical lessons learnt, but we must do so with a note of caution.

International tournaments are invariably split neatly into two halves, the first a flirtation with attacking football as pundits are hypnotised by the explosive football of fast starters, and the second a tense affair in which those same nations fizzle out as the more conservative tacticians come to the fore.

We never learn this lesson because by the time the tournament is over we have invariably erased the group-stage narratives from memory, retrospectively rewriting what we saw and – correctly - magnifying the significance of the high-pressure sudden death matches.

Nevertheless there is value in assessing the highs and lows, the tactical notes, of a hugely enjoyable Euro 2020 so far. Here are the four major talking points from the opening fortnight:

1) High-pressers grab attention but may prove too exhausting

Spain and Italy have emerged as two of the early favourites to win Euro 2020 thanks to their respective high-energy, hard-pressing, swarming possession in the group stages.

The Italians raced out of the blocks and won all three matches by playing in a shape-shifting 4-3-3 in which Jorginho pulled the strings as the right-back helped form a back three so that left-back Leonardo Spinazzolo could hurtle forward to help out. They have scuttled all over their opponents, breaking the mould of tentative midblocks as the dominant mode of playing international football.

Likewise Spain have suffocated the opponent, recording a PPDA (a measure of pressing intensity based on the number of passes the opposition make before a team intercepts with a defensive action) lower than anyone else in the competition by a big distance. Pedri has been the driving force through midfield, constantly looking for the line-breaking pass, and had it not been for Alvaro Morata's profligate finishing the Spanish would have won all three games at a canter.

One explanation for the fluidity, cohesion, and contemporary club-football style is that Luis Enrique and Roberto Mancini are by far the best coaches at the tournament. However, another take is that both managers have too much experience at club level – and are not taking the right approach… 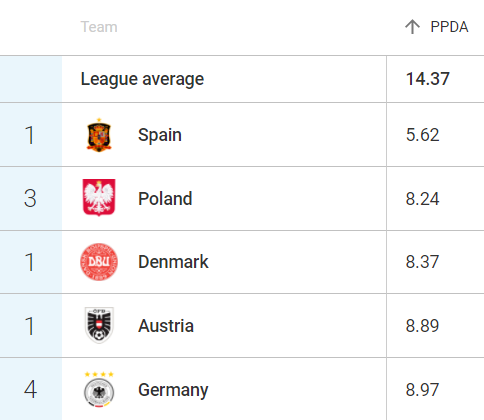 2) Simple and cautious tactics, with a sprinkling of star power, still king

Tournament football is exhausting, particularly in a Covid year, so Spain and Italy may both run out of steam. What's more, when the knockout stages bring even contests and sharp counter-attackers Spain and Italy won't be able to dominate territorially, while their high defensive line will leave them extremely vulnerable against those who can evade the press.

France, Portugal, and England have all adopted the tried-and-tested method of international football: defensive solidity, a safe midblock, and reliance on winning the moments with a sprinkling of star power. This tends to work well once games become evenly matched - despite generally triggering unnecessary anxiety in the group stages – because managers just don't have the time on the training field to coach anything more complex.

For France, Paul Pogba has stood out from the centre of this system, playing brilliant through balls to Kylian Mbappe in a simple partnership that could see Didier Deschamps team once again grind their way to victory. Portugal have been a little bit more chaotic, and are yet to really click into gear from the safety of their tactical caution, while England have kept three clean sheets and appear to be gaining momentum at just the right moment.

Notably, however, all three instruct their full-backs to stay deep. England, likely to move to a 3-4-3 for the knockout stage, may learn a thing or two from absorbing the most interesting tactical development of Euro 2020… 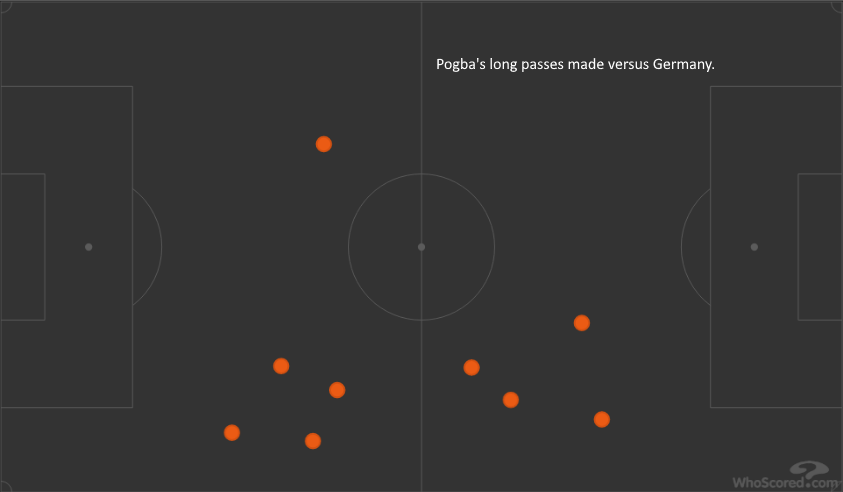 Seven of the top 20 players for expected assists at Euro 2020 are wing-backs or full-backs, and 24% of the total assists (13 of 61) have been from players in this position. They also account for four of the top five crossers and six of the 16 players who have made three key passes or more.

Belgium, the Netherlands, and Germany have all deployed wing-back systems at Euro 2020 and consequently the wing-back has emerged as one of the most important creative forces on the pitch. This is hardly surprising given the tactical shift at club level, but nevertheless it is a development that could have huge implications on how the rest of the tournament plays out.

Thomas Meunier has a goal and an assist, Denzel Dumfries has excelled on the right for the Netherlands, and Robin Gosens was particularly prominent in a 4-2 victory over Portugal. As central midfields are clogged up with these conservative midblocks, using advanced wing-backs is proving to be a useful way of getting round – and then through – an opposition defence.

But it is wrong to focus too heavily on broad tactical ideas or indeed specific innovations, because when it comes to sudden death football the margins will remain fine; the winner of the tournament will benefit from a stroke of luck or the chaos of a single moment.

Consequently when looking for clues from the group stages we should focus on which nations have the most tactical flexibility and which managers adapt best to a changing situation. Gareth Southgate has shown a surprising dexterity as England flowed freely between 4-2-3-1 and 3-5-2 against Czech Republic, with a shift to 3-4-3 anticipated for the Germany game. However, his in-game changes often come too late, and that may act against England as it did when Croatia gradually seized control in the 2018 World Cup semi-final.

Portugal have shown great promise in this regard, most notably when Fernando Santos decided to drop Bruno Fernandes for Renato Sanches in their crucial final game against France. What's more, the way Cristiano Ronaldo and Diogo Jota regularly change position could be very handy in the latter stages.

Many more coaches may prove their flexibility in the rounds to come – we just don't have the evidence yet. That is hardly a surprise considering most matches of significance at Euro 2020 so far have been strong team versus weak, forcing a tactical landscape that has little bearing on what is to come next.