England face Italy in the Euro 2020 final on home soil and as the bookies' favourites to win their first major tournament in 55 years.

It is unchartered territory for Gareth Southgate's team and yet there are unlikely to be any nerves in the camp; this is a calm, confident, and defensively solid England side unlike any of the anxious, fatalistically doomed sides of years gone by.

Nevertheless it is undoubtedly England's most difficult game of the tournament and Roberto Mancini's side will be quietly confident they can dominate central midfield and use it as a platform for victory. It will be a tense and low-scoring affair on Sunday likely to be settled by the finest of margins, and despite probable territorial dominance from the Italians the match will undoubtedly feel like an even game that could have swung either way.

But England do, perhaps, have a slight edge.

The tactical strategy Southgate used in the 2-1 victory over Denmark happens to be the right way to approach Mancini's 4-3-3, which means few changes in system or personnel. England's 3-4-3, which prior to Euro 2020 was expected to be used whenever they played one of the bigger nations, is not the right system for Sunday – when a two-man midfield would surely be overrun by Jorginho, Marco Verratti, and Nicolo Barella.

Italy's likely control over central midfield necessitates England using a three so that Mason Mount can drop onto Jorginho as Verratti and Barella advance to put Declan Rice and Kalvin Phillips under pressure. England's usual 4-2-3-1 is the way to go, even if Italy will still manage to dominate possession as a result; Southgate will be happy to absorb pressure for long periods, his conservative system keeping England in their shape and waiting for opportunities to counter-attack.

From this hunched position, England will likely attempt the same unusual pressing structure that worked against Denmark, using the wingers to cut off passes into the middle and leaving the wing-backs free. This will again take some pressure off England's weakest area – midfield – and limit the damage that Verratti and Barella can do. 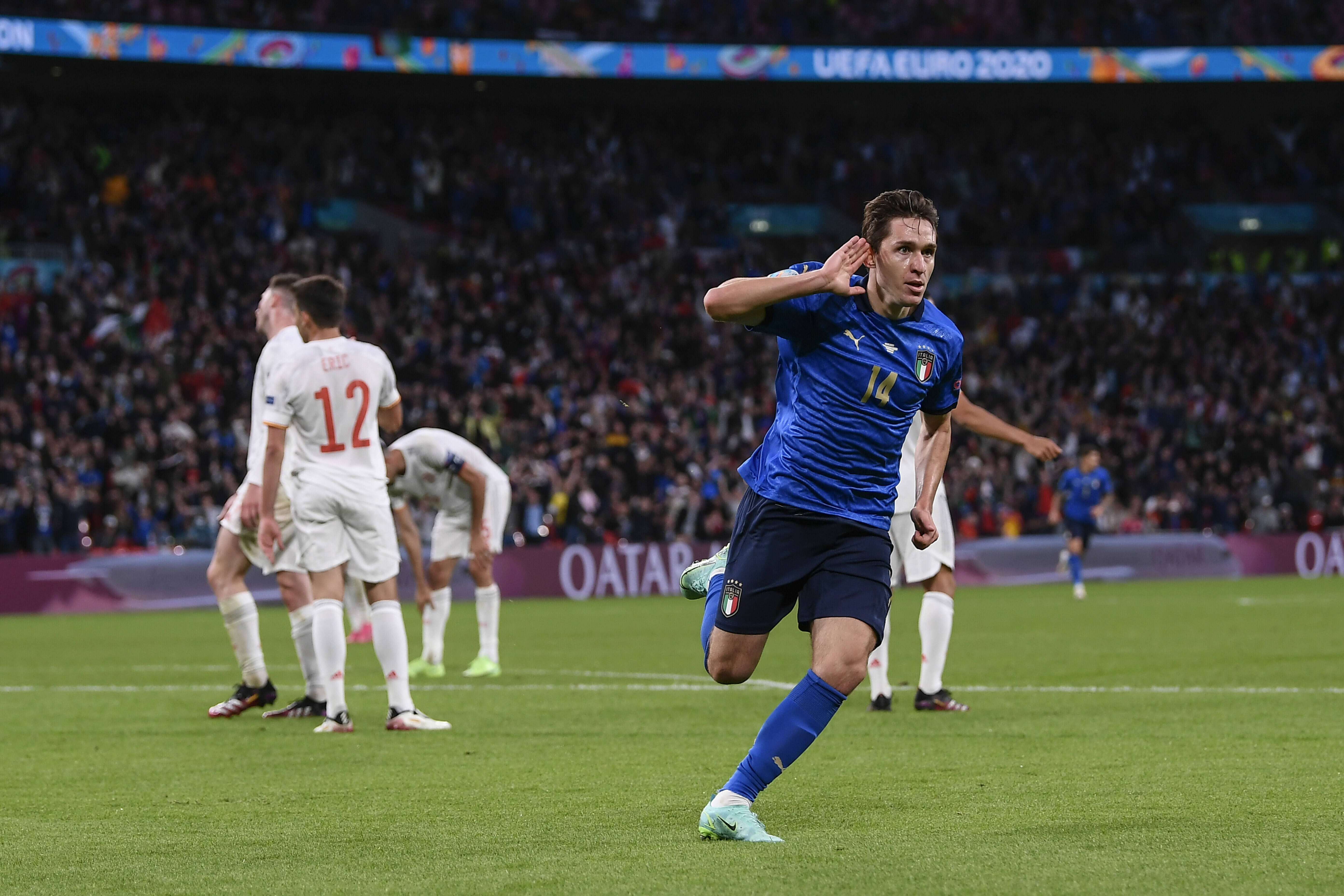 England hold the advantage on the wings

Italy can, of course, do damage down the flanks. Federico Chiesa has the direct dribbling ability to move behind the advancing Luke Shaw and get at Harry Maguire, who isn't comfortable up against pace, although Mancini's brightest player on the flanks is now injured and out of the tournament. The loss of Leonardo Spinazzola has limited Italy's strength out wide, and now their on-the-ball 3-2-5 can look a little flat.

Emerson, his replacement, should struggle up against Bukayo Saka. Southgate is likely to pick the versatile teenager because he can happily drop into right wing-back, supported by a narrower Kyle Walker, in order to seamlessly shift England's formation from a 4-2-3-1 to a 3-5-2: the mirror image of Italy's 3-2-5. Going man to man in a relatively low block will give England a strong platform.

On the ball, England will look to cause damage down the flanks as they have done throughout the tournament. Only four nations at Euro 2020 have attacked down the wings more frequently than England's 77%, per WhoScored, and indeed that statistic also passes the eye test: Southgate's side have an archetypal goal, a cutback from the byline, and all 10 of their goals have been scored from within 12 yards.

On the one side Shaw's overlapping runs and Raheem Sterling's infectious energy would test any defence in the world, but the real danger is on the right. Emerson isn't strong defensively and is expected to pour forward in attack, handing first Saka an advantage and then – should Jack Grealish come on in the second half – handing Sterling the chance to run at tired legs as he switches to the right.

Set-pieces and substitutions could settle it

But these are small gains for England, and ultimately there is just as good a chance that a set-piece will decide the tie. England and Italy rank in the top three for set-piece goals at Euro 2020, which account for 23% of their combined total, so all eyes are on the likes of Maguire and Harry Kane against Italy's powerful centre-back partnership of Leonardo Bonucci and Giorgio Chiellini.

Finally, regardless of the tactical pattern this game could fall into, substitutions and in-game management will play a huge part. The ability to use five substitutes has given nations the chance to dramatically alter the shape of a match, and Mancini has regularly used all five. In the semi-final Italy's rhythm was disrupted by all the substitutions and it almost cost them, while Denmark lost their way against England for similar reasons. By contrast, Southgate tends to use only a couple and rarely before the 70th minute. In other words he holds his nerve, and it works. Given how measured and defensively resilient England have been all summer, that attitude from the dugout could go a long way in a nervous final at Wembley.