REVEALED: Guendouzi clashed with Arteta and Arsenal staff in Dubai

Manchester City's 2-1 defeat to Manchester United has surely ended this season's title race, leaving the champions 14 points behind Liverpool and on course for their worst points tally under Pep Guardiola. His time at the club might be coming to an end.

Leicester City's eighth successive win kept the gap to eight points, and yet even with an impressive new diamond 4-4-2 on show at Villa Park it seems unlikely Brendan Rodgers side will match Liverpool's probable three-digit points tally.

Everton completed 37 tackles in Duncan Ferguson's first game as interim manager, the most in a single Premier League match this season and their highest tally of the decade, per Sky Sports' Adam Bate. That stat sums up the Toffees' aggressive, motivated performance against Chelsea which showed the power of a terrifying and animated figure on the training ground and in the dugout. For once, Everton worked hard.

His midblock 4-4-2, shimmying across to cover the width and tightly compressed to squeeze out the number ten space, was more Diego Simeone than Sam Allardyce; Ferguson's side didn't drop too deep, instead forcing Chelsea's centre-backs to hold aimless possession in their own half while suffocating Mason Mount and Christian Pulisic out of the game.

Chelsea had no idea what to do going forward and, particularly in the first half were vulnerable on the break. Richarlison dropped cleverly off the front line to find pockets of space in the transitions, creating Everton's opener in this way. Whether tactical genius or simply short-term motivator, Ferguson's system is the ideal way to get through a tough run of fixtures in December. 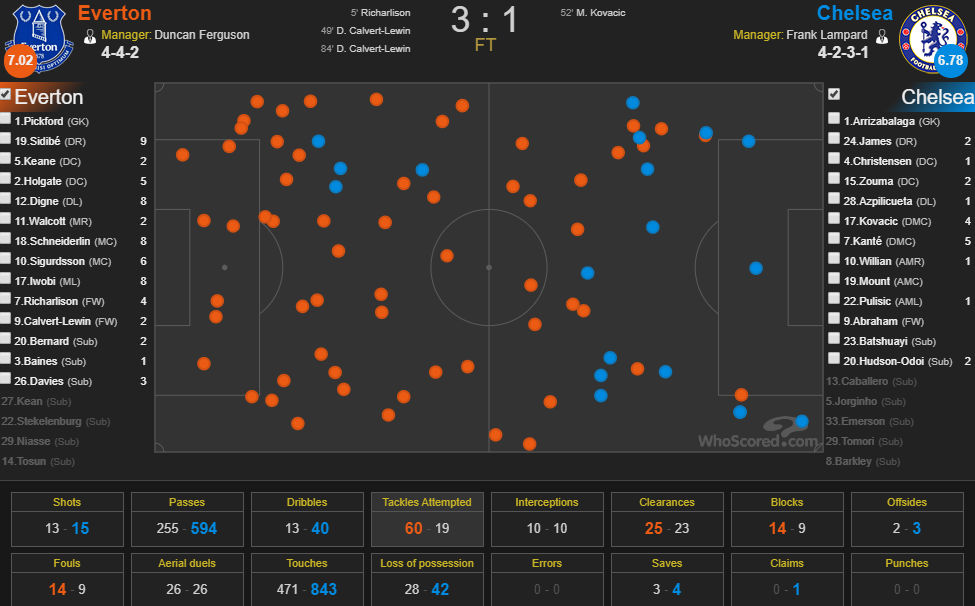 The most assured Tottenham performance so far under Jose Mourinho had several important indicators that his players are beginning to absorb the Portuguese's methods. Quick counter-attacks are crucial for Mourinho, and certainly Spurs were able to suddenly change tempo and break in high numbers on Saturday; their 2-3-5 in possession ensures there are four or five Tottenham runners ready to pounce.

Crucially, Spurs kept a clean sheet by knowing when to slow the game down, using risk-averse passing in their own half to recycle possession and control proceedings – before switching gears with long, raking diagonal passes out to Serge Aurier on the right flank. This is classic Mourinho: arrive quickly into the final third to create a false counter-attacking scenario having lulled the opponent into low-tempo defending.

Burnley were very accommodating opponents, however. Sean Dyche's team were bizarrely stretched out across almost the entire length of the pitch in their 4-4-2, covering far too much ground in a decompressed formation that made it very easy for the hosts to counter.

Nevertheless this was an assured performance from Tottenham and a further sign the squad will listen closely to the new manager's instructions, no matter how different these are from Mourinho's popular predecessor.

Leicester City are seemingly getting better each week, their eighth win in a row signifying yet further growth as Brendan Rodgers continues to defy expectations in the midlands. Assuming Liverpool eventually slow down, 2020/21 looks like it could be Leicester's year to reclaim the title.

Rodgers used a diamond 4-4-2 for the first time this season at Villa Park, correctly identifying several major weaknesses in Dean Smith's team. The first is their high line and overlapping full-backs, which leave Villa exposed to fast counter-attacks; playing Jamie Vardy and Kelechi Iheanacho together up front made it two on two, and unsurprisingly it was the Leicester players who won the foot race.

By playing such a narrow midfield four and conceding the flanks, Rodgers also highlighted how much Villa funnel through the middle via John McGinn and Jack Grealish as he cuts inside. Leicester outnumbered Villa in midfield, keeping the two playmakers quiet, while Ricardo Pereira easily dispatched of Matt Targett one on one. 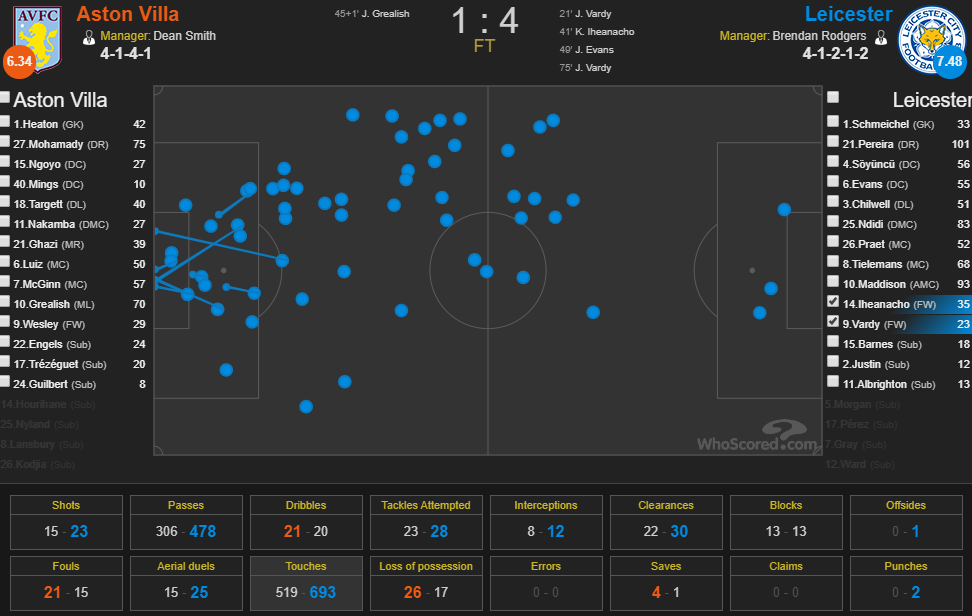 It would be wrong to assume Man Utd's 2-1 win over Man City at the Etihad is a new dawn for the club. Ole Gunnar Solskjaer's favoured tactics – sit deep, absorb pressure, and counter-attack via pacey wingers – can only work against teams who hold the majority of possession, and in the modern game it is impossible to create a scenario whereby that happens every week.

But Solskjaer still deserves praise for targeting City's weaknesses on Saturday. Marcus Rashford and Anthony Martial stayed high up the pitch and attacked down the left in the gaps left by Kyle Walker, whose instructions to sit in central midfield exposed his centre-backs. Fred and Jesse Lingard were superb in launching the breaks and moving intelligently into space to receive the ball, their sharp touches evading City's first wave of the press.

Man City's defensive weakness, brittle midfield, and over-commitment to high possession football makes them the perfect opposition for Solskjaer's tactics. Everton at home on Saturday is, strange as it sounds, a bigger test of United's progress than the City match.

Worst of the Week – Arsenal's and West Ham's performances on Monday

Freddie Ljungberg collected his first win as Arsenal manager on Monday night courtesy of three goals in 10 second-half minutes at the London Stadium, but neither they nor West Ham came out of this game with much credit. Another baffling line-up from Ljungberg, mixed with low tempo passing, meant West Ham easily sat deep in the first half and frustrated the visitors, who until scoring out of nothing in the 60th minute were woeful.

The turnaround was thanks to a shift in energy levels, with Lucas Torreira in particular finally taking the ball and looking for an assertive forward pass; Arsenal began to counter-attack straight from a West Ham counter, catching the hosts when they were stretched rather than sluggishly allowing Manuel Pellegrini's side to get back into shape.

But the flurry of goals said more about West Ham's fragility than anything else. Arsenal were passive in the first half, West Ham passive in the second. Both need new permanent managers as soon as possible.