Aubameyang delighted with new Saka Arsenal deal: I could be next!

It was hardly a vintage weekend of Premier League action, but by the end of the 17th round it had proved to be a significant one.

Liverpool moved further clear at the top of the Premier League table after Leicester City slipped up, while Aston Villa became firmly established as relegation candidates.

On Sunday, Arsenal ensured Freddie Ljungberg won't be getting the job full-time with a heavy defeat to Manchester City that exemplified all the long-term issues the interim manager has failed to improve.

Duncan Ferguson was delighted with a point but Everton really should have won at Old Trafford – or could have done if they repeated the style of their victory against Chelsea the previous weekend. Instead, Ferguson's side were too high and too open for the first 20 minutes, lucky that Man Utd's through balls in behind the defence didn't lead to a goal.

Furthermore, playing so many attacking players (four strikers in total, and forwards on both wings) ultimately allowed United to equalise. Alex Iwobi struggled defensively all game, often dropping too deep in fear of Marcus Rashford, and it was his hesitancy that let Daniel James set up Mason Greenwood for the hosts' goal. The teenager had too much space to shoot because Richarlison, a striker on the other wing, wasn't sharp enough.

Man Utd are nullified when teams sit a little deeper than usual and deny them from building speed on the flanks. The shape of Everton's 4-4-2 and the attacking personnel created an open game, which is precisely what you don't want to do. 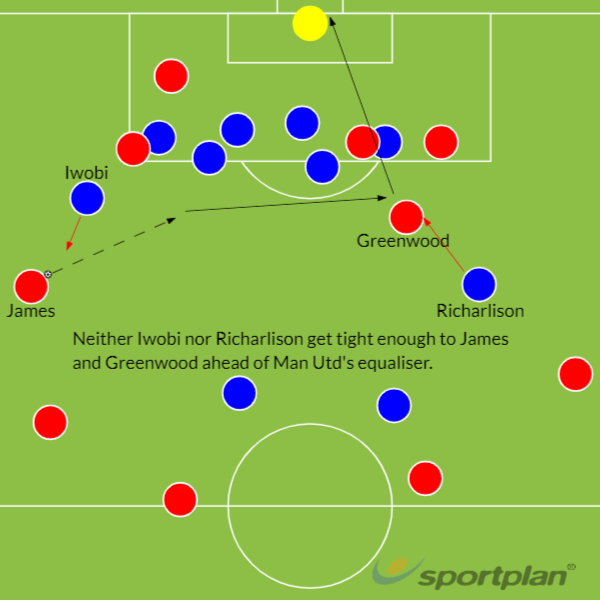 For quite some time now Man City have not looked their fluid selves going forward, with David Silva too disconnected from midfield, Kevin de Bruyne too far out to the right, and both wingers staying wide awaiting a pass to feet. Pep Guardiola's side haven't been building through teams as well as in the last two seasons, but order could be restored now the manager has changed formation to a narrow 4-2-3-1.

With Phil Foden cutting in from the left and De Bruyne back through the middle, City could overwhelm Arsenal in the number ten space – where Freddie Ljungberg's confused, open side are most vulnerable. Playing two midfielders side-by-side in Rodri and Ilkay Gundogan increased their passing options centrally, and meant they had enough bodies to evade the haphazard Arsenal press and counter-attack.

For the second and third goals De Bruyne was released by Rodri and Foden respectively, bringing assertive attacking football back after months of difficulties in midfield. Guardiola should stick to the system for the time being, even if that means keeping David Silva on the bench. 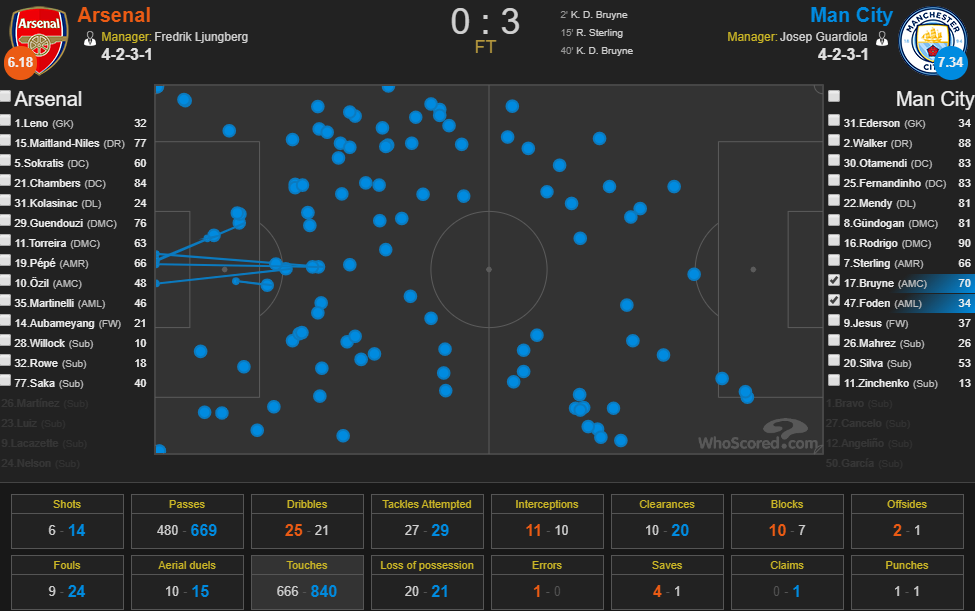 3) Aston Villa look stale after three defeats in a row

Only goal difference is keeping Villa out of the bottom three and judging by their most recent defeat, 2-0 at Sheffield United, they will soon be in the relegation zone. Villa's problem is being too consistent, playing in the same 4-3-3 formation and attempting the same passing combinations week after week; opponents have begun to suss them out.

Jack Grealish also looks a little isolated out on the left, and without the freedom to roam it is easier to predict his moves (invariably that means cutting inside). For Dean Smith to get Villa out of trouble he needs to make a drastic change of approach, perhaps to a three-man defensive system that can help get Wesley the close support he needs. At the moment, the Brazilian is all alone, and Villa struggle to get up the pitch unless Grealish is carrying the ball.

A 3-4-2-1, with Grealish and Anwar El Ghazi as inside forwards, could do the trick. Matt Targett and Frederic Guilbert are likely to flourish as wing-backs (both are better in attack than defence), but more than anything it would simply shake things up – getting Villa out of the well-worn grooves to play some inventive football again.

Best of the Week – Tottenham win ugly at Molineux

It was one of their worst performances under Jose Mourinho and yet one of their best wins, an ugly 2-1 courtesy of a late set-piece goal despite having held just 42% possession and been second best for most of the game. It was trademark Mourinho, then, and the kind of win people tend to view as a sign of a potential title challenge.

It was certainly not the sort of game Mauricio Pochettino would have won. Hiring Mourinho was an attempt to shake off the 'Spursy' tag, to win trophies rather than fall just short. And so beating Wolves 2-1 in the wind and rain, with their determination and set-piece routines paying off, is probably the most satisfying result so far for Daniel Levy.

Saturday was surely the worst day of football in the Premier League this season. There were just nine goals in six games. Only seven teams scored at all, and five of those just once. Perhaps the cold and wet weather explains why nobody really turned up, or perhaps it was a continental hangover for Liverpool and Chelsea mixed with December tiredness.

After all, teams rotate their starting 11s more than usual through the hectic December schedule, and fluidity of attacking moves tends to suffer when changes are made. Whatever the reason for the dip in quality, it should only be temporary. Next Saturday sees Everton take on Arsenal and Man City host Leicester.