Man Utd chief Butt: Angel Gomes could be anything

The first international break of the season is always a good time to look at the league table and take stock. So far Chelsea and Manchester United have struggled while Leicester City and Everton have made strong starts, suggesting the Big Six could finally be broken up this season.

At the other end of the table, Aston Villa and Watford are probably the most worried right now. It will be a long fortnight for Javi Gracia in particular.

The fourth round of Premier League matches brought 31 goals, a testament to the chaotic nature of the current campaign as clubs from top to bottom use expansive attacking tactics. Arsenal and Spurs produced their usual madness at the Emirates, a Fabian Delph-inspired Everton beat Wolves in a surprise five-goal thriller, and Sheffield United piled on the misery for Chelsea with a comeback draw at Stamford Bridge.

Andre Gomes and Morgan Schneiderlin were dreadful at Villa Park last weekend, completely losing control of the midfield battle to John McGinn and Jack Grealish; it looked as though this flat-footed partnership would crumble against the organisation of Wolves' midfield three. Instead, Everton deservedly won at Goodison Park thanks to Fabien Delph, who was superb on his debut.

When Delph first joined Manchester City he was one of the league's best central midfield players and after three years as a left-back he reminded us of that fact on Saturday. The former Villa man was everywhere, tackling and screening in front of the back four and playing sharp, intelligent passes into the forwards to release the likes of Richarlison on the counter-attack. Delph's athleticism and dynamism blew Wolves away; he completed more passes (64), won more tackles (four), and made more interceptions (three) than any other player on the pitch.

Delph is just what Everton need to move to the next level. Richarlison and Gylfi Sigurdsson are better when given space to break into, and with Delph's assertive distribution their output will improve this season. He might not have been directly responsible for any of the goals, but Delph's energy and tenacity is what gave Marco Silva's side the confidence to retake the lead every time Wolves pegged them back. 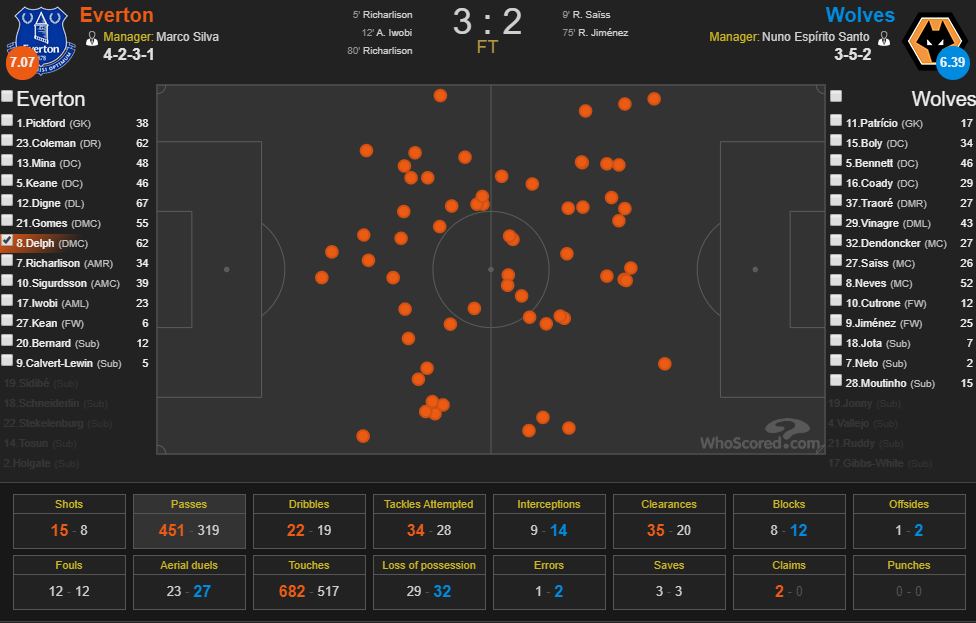 For long periods of a wild North London derby on Sunday evening Arsenal were dominant, pinning Spurs into their own half thanks to the tireless work-rate in central midfield from Matteo Guendouzi and Lucas Torreira. Tactically, the club are starting to play proper Emery football, lining up in a Liverpool-style 4-3-3 formation characterised by counter-attacking speed and hard pressing.

However, it is a risky approach and with Sokratis and David Luiz at the back Arsenal are just too error-prone to become title-challengers. Both centre-backs rushed out of their defensive line ahead of Tottenham's opener, before Granit Xhaka's unnecessary challenge gave away a penalty. Between them, these three players will continue to let Arsenal down.

The game was also defined by the poor quality of both sets of full-backs. For Spurs, Davinson Sanchez struggled badly, and for Arsenal, Sead Kolasinac and Ainsley Maitland-Niles couldn't provide the width and creativity that is needed in that Liverpool-esque narrow 4-3-3.

Most Premier League matches begin the same way; both teams press high in a furious first 10-15 minutes, battling in a tactics-free chaos until the game eventually settles into a coherent pattern. It's what makes the Premier League so unique, and in the Saturday lunchtime kick-off it's what allowed Manchester United to take the lead.

Saints eventually dropped into the same deep 4-4-2 that brought Crystal Palace success the previous weekend – United's emphasis on speed in attack means dropping back almost completely nullifies them – but at first they pressed hard. In a 4-4-2, this meant the wingers and two strikers were easily taken out of the game by United's passing, releasing their quicker players into the final third against a frantically backpedaling defence. This happened several times before Daniel James eventually opened the scoring.

Once Saints dropped back they were greatly improved and deserved to score a second-half equaliser. United are one-dimensional, and consequently opponents must approach them with unusual simplicity; immediately drop back and United will be successfully frustrated.

Best of the week – Sheff Utd's comeback at Stamford Bridge

It took them a while to grow confident at Stamford Bridge, but eventually Sheffield United's 3-5-2 formation proved to be exactly the right system to exploit the frailties in Frank Lampard's 4-3-3. First, as Mason Mount pushed high and Matteo Kovacic tired, United's three-man midfield had a clear numerical advantage that allowed them to crank up the pressure in the second half.

Equally important was Enda Stevens and the support of overlapping centre-back Jack O'Connell. Together, these two confounded and overwhelmed Cesar Azpilicueta, who was at fault for both the visitors' goals. Chris Wilder will be disappointed that his team were initially nervous, explaining the needless defensive errors that allowed Chelsea to go into a 2-0 lead, because ultimately the newly-promoted club were more organised than the hosts. Lampard's problems deepen at the Bridge. 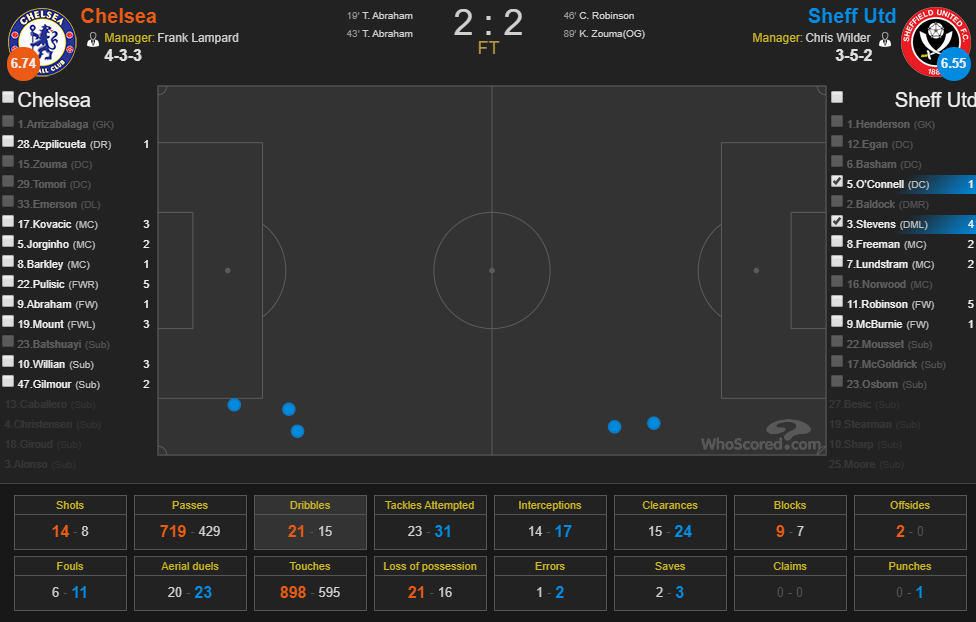 Worst of the Week – Norwich's openness at London Stadium

Norwich have been praised for their expansive football so far this season, but after a chastening 2-0 defeat at West Ham on Saturday it is time Daniel Farke takes a more conservative approach in away matches. It might look commendable to play in a wide, attacking formation on the road, but in the Premier League it is simply naïve to do so.

Teams like West Ham enjoy playing on the counter but normally are not allowed to do so at home. Consequently Norwich's approach played right into their hands, with Felipe Anderson and Andriy Yarmolenko breaking quickly between the lines of the Norwich midfield. Farke's side must be a bit more cautious, and a bit more streetwise, if they are to survive the drop this season.