Fernandes: I cried when Man Utd made their bid

Liverpool remain at the summit of the Premier League table after a confident victory over Chelsea that will be remembered for Mohamed Salah's emphatic strike and yoga-pose celebration, simultaneously cutting angrily through the tension and suggesting the club is staying calm amid the rising pressure.

It might not be enough, of course, with Manchester City looking unstoppable after an easy win earlier on Sunday that was defined by Crystal Palace's poor defensive setup.

1) Defeats for those with possession reveals 2018/19's biggest trend

In all five Premier League matches last weekend that did not involve the Big Six, the team that held the majority of possession lost the game. This follows a pattern that has become arguably the defining feature of Premier League football in 2018/19; teams are now far more comfortable sitting back and playing on the break than holding the ball.

One reason for this is that the days of tiki-taka are long dead, and in the modern game everyone knows how to counteract it; sitting back and patiently absorbing pressure is the norm. But more importantly the emergence of a Big Six – who are considerably wealthier than the rest of the division – has forced clubs to invest in players and tactics that work best when on the back foot. The inequality in the division has made it impossible for clubs to succeed with a progressive approach.

Fulham's dreadful season epitomises this problem, the Cottagers being arguably the only side outside the top six who try to play possession football every week. Conversely Bournemouth, who used to be a possession side, have begun to play regularly on the counter-attack this season. The new order is attack versus defence, and that means mid-table clashes are odd affairs in which neither side particularly wants the ball.

Chelsea were far less assertive at Anfield than in the corresponding fixture last year, a 1-1 draw at Stamford Bridge, with Maurizio Sarri instructing his side to sit off the league leaders and invite them on. The plan may have been to suck Liverpool forward and then quickly evade the press, breaking in behind them, but instead it just allowed the hosts to dominate the game.

Nerves are high inside Anfield, which is why Sarri's usual high-pressing approach could have ruffled feathers and forced Jurgen Klopp's side to slip. Instead, they were allowed to gradually feel their way in, slowly increasing the pressure until Sadio Mane's opening goal felt inevitable.

Emerson had a poor game at left-back and Liverpool capitalised on this well. Jordan Henderson surged past the Brazilian to set up the first goal, and then Salah easily cut inside Emerson before firing a brilliant shot into the top corner. 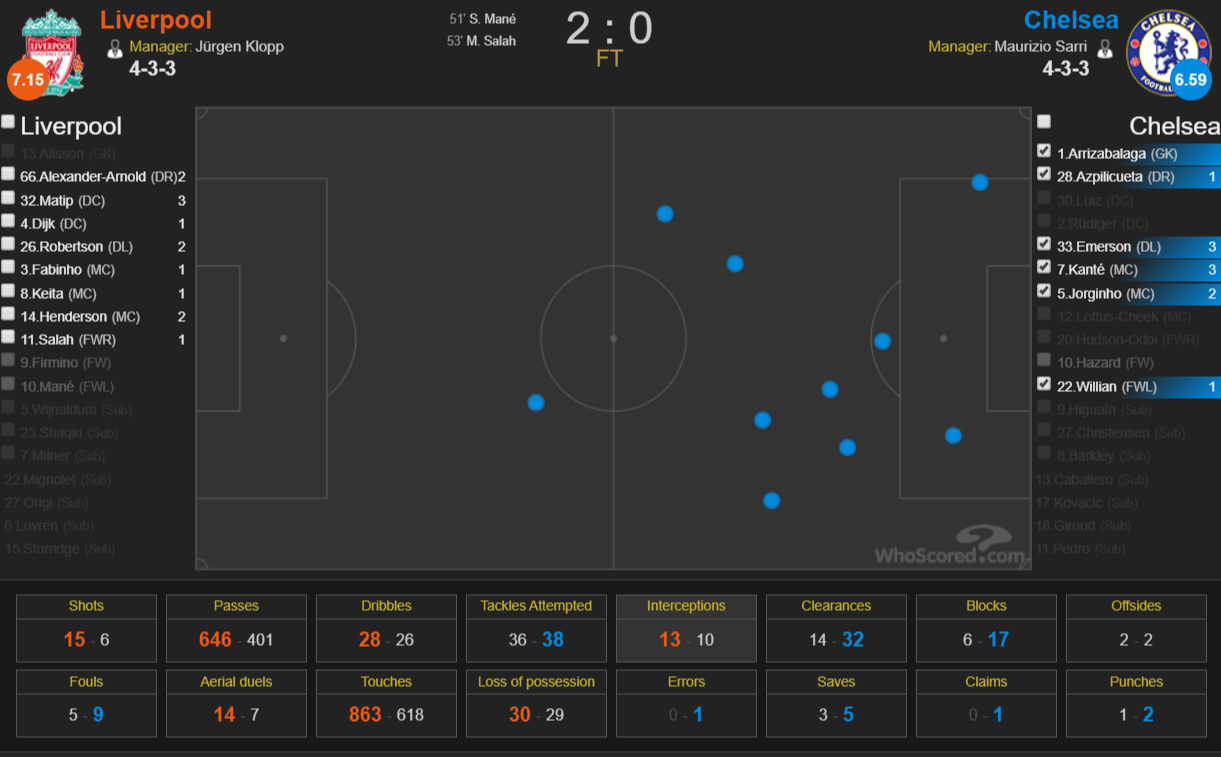 3) Plenty of work lies ahead for Man Utd

Manchester United might have beaten West Ham on Saturday but their performance was very flat, reminiscent even of the Jose Mourinho era; they no longer have a clear tactical direction, instead meandering around the pitch unable to raise the tempo or link quickly in the final third. It is far too early to worry about Ole Gunnar Solskjaer's tactical acumen, but their display was evidence of the sheer amount of work that lies ahead.

West Ham held 58% possession at Old Trafford, primarily because Felipe Anderson and Manuel Lanzini were dominant in wide areas, easily isolating Man Utd's weaker full-back pair Diogo Dalot and Marcus Rojo. West Ham had the better chances, too, and had Marko Arnautovic been available up front to replace an under-performing Javier Hernandez the visitors would probably have emerged with the three points.

Solskjaer wants to play fast, expansive football that focuses on overlapping full-backs and quick interchanges in central attacking midfield: the Fergie way. After a few weeks succeeding in this goal at the beginning of his tenure, it increasingly looks like we were conflating a psychological boost with a tactical one.

Best of the Week – Southampton's tactics against Wolves

Ralph Hasenhuttl has masterminded four wins from Southampton's last six matches to boost them eight points clear of the drop zone, and their 2-1 win against Wolves was as impressive as any other under the new manager. He once again deployed a 3-4-2-1 formation, engaging in a complex pressing game that alternated between bursts of engagement and periods of dropping deep, to ensure Wolves could not create many opportunities.

It was the perfect system for facing Wolves, whose 3-5-2 is perhaps finally coming unstuck: Nuno Esperito Santo may need to shake things up now Saints have provided a template. The 3-4-2-1 meant Southampton had a four versus three in midfield and a three on three in the final third, giving them a numerical advantage in key positions while matching man-for-man in the wide areas.

There is nothing wrong with sitting back against Manchester City, but Palace were ludicrously deep on Sunday afternoon, ensuring the visitors could play in second gear and still win comfortably. Roy Hodgson's line of five midfielders was practically on top of the defence, therefore only actually squeezing out a thin strip of turf between the two lines.

The midfield rarely engaged City, and so Kevin de Bruyne was able to play in his usual position completely unchallenged; there is no point sitting so deep you're practically falling off the pitch, since that doesn't actually stop the opposition playmakers from getting on the ball in dangerous areas. 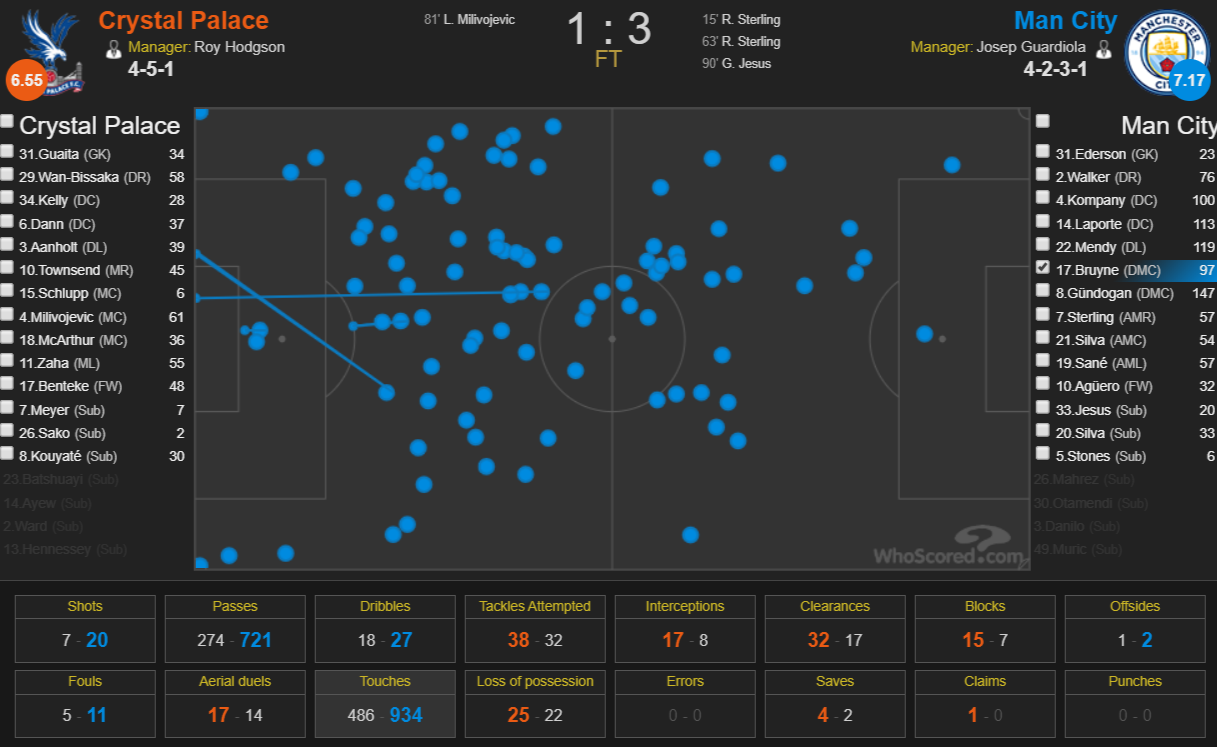