Liverpool returned to the summit of the Premier League table on Friday night courtesy of a Mohamed Salah goal that could prove to be the pivotal moment in the title race. If this is Mohamed Salah back to his best, then Jurgen Klopp's side should be considered favourites to finish above Manchester City in May.

The weekend was relatively quiet after Friday's match, that is until Watford and Wolves played out one of the best FA Cup semi-finals in memory. Gerard Deulofeu was the hero for Javi Gracia's side, while elsewhere Everton tactically outclassed Arsenal before Eden Hazard's goals saw Chelsea brush West Ham aside.

Eden Hazard's brilliance won Chelsea the game on Monday night, and without his moments of magic this could have been another damaging result for Maurizio Sarri.

However, there were flashes in the second half of a more Napoli-esque Chelsea emerging with Ruben Loftus-Cheek, Callum Hudson-Odoi, and N'Golo Kante all playing their part in quicker, more vertical football.

Their one-touch lay-offs and spins into space began to unsettle West Ham as the visitors' legs tired, with Kante in particular looking creative and forward-thinking in his box-to-box role; it was one of the Frenchman's best performances under Sarri. Chelsea still lacked dynamism, however, and often relied on the directness of Hudson-Odoi or Hazard to break the lines.

West Ham were tepid in the first half, unable to break because Marko Arnautovic was too far away from the out-ball to Felipe Anderson, meaning the Brazilian was often left countering alone. In the second 45 the visitors were much better with Arnautovic as the target man and Robert Snodgrass providing greater energy, and therefore support, to Arnautovic and Anderson.

However, ultimately they didn't have enough to trouble the hosts (who always kept one full-back in defence to make a flat back three), which is why Chelsea could show glimmers of Sarri-ball in the final 20 minutes.

Where Hazard and Hudson-Odoi dominated for Chelsea 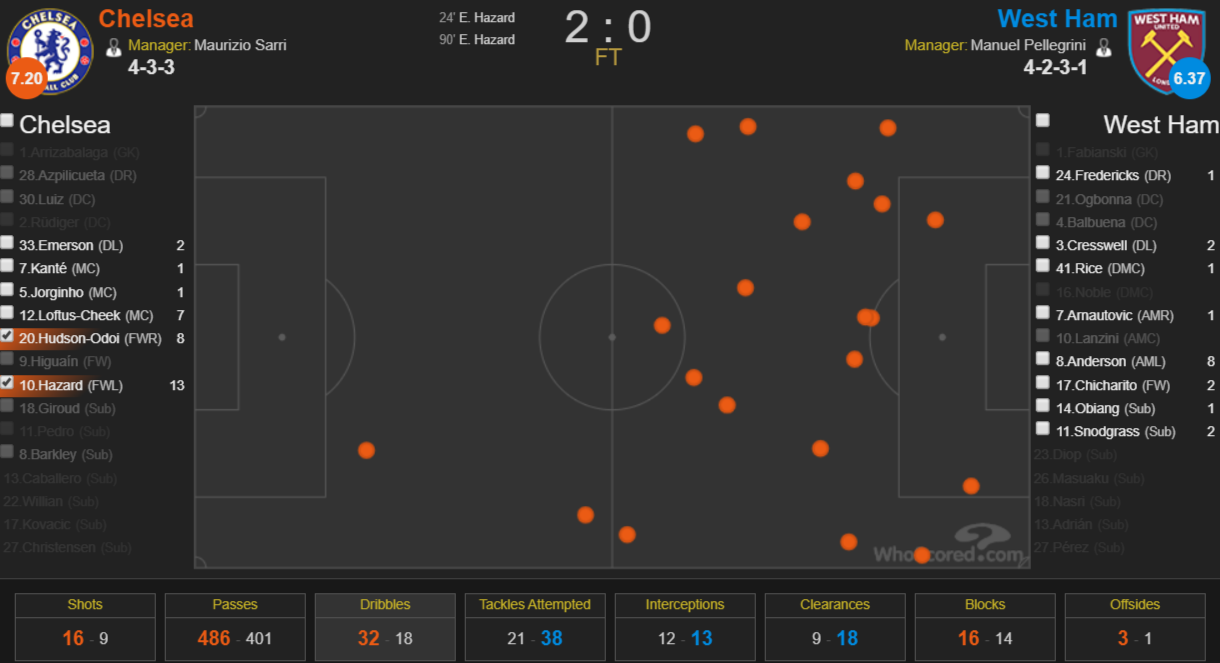 Southampton looked the most likely to grab the three points on Friday evening until Jurgen Klopp made a surprise double substitution; Jordan Henderson came on for Georginio Wijnaldum, rather than the more obviously creative Xheran Shaqiri, while Trent Alexander-Arnold was replaced by James Milner despite the young right-back providing numerous assists this season. It proved to be a stroke of genius from the Liverpool manager.

Milner's experience solidified Liverpool's right flank after it had looked as though Nathan Redmond and Ryan Bertrand were set to grab the winner for Southampton. The vast majority of their attacks were down that side, where Alexander-Arnold's inexperience saw him commit to challenges that allowed Redmond or Bertrand to overlap and find space. Milner shut it down.

But Henderson had an even bigger influence, bombing forward from right centre midfield to inject Liverpool with energy at a time when they were significantly slowing down. His vertical passes and sweeping runs seemed to ignite his team-mates, while his excellent headed pass set Mohamed Salah away for that crucial second goal.

Henderson impact in Liverpool's attacking half

Arsenal were one again flat and strangely lifeless on their travels this weekend, Mesut Ozil's disappearing act symbolising his team's inability to rise to the occasion at Goodison Park. But it isn't just a psychological barrier that holds them back; Unai Emery's use of a 3-4-2-1 shows he is yet to work out how to keep Arsenal competitive in more even contests.

At the Emirates, the system makes sense because Arsenal hold so much possession. One or two of the centre-backs can step out on the ball while the wing-backs push on, creating little triangles all over the pitch for Emery's high-tempo football. But for away games, when possession is more equal, the wing-backs have to drop and Arsenal are left with an unflattering box shape in midfield (two centre-mids and two inside forwards).

Everton followed a tactical pattern that others (notably West Ham) have deployed this season, sitting their two midfielders tight onto Arsenal's midfielders, which in that square shape severely limits their opportunity to build with speed. Consequently Everton took control of the match, and, targeting Nacho Monreal with Richarlison, were able to overpower the Gunners.

Best of the Week – Deulofeu's impact for Watford

Javi Gracia deserves plaudits for introducing Gerard Deulofeu into the game and subtly switching Watford's formation from a diamond 4-4-2 to a 4-3-3 in the second half at Wembley. The Spaniard almost single-handedly turned the game on its head with his two brilliant individual goals, and yet his impact went deeper than this.

He played wider than Will Hughes, which meant a too-narrow Watford finally took advantage of the space left by Wolves' marauding wing-backs. Deulofeu was a clearer outlet on the wing for Watford, allowing them to move up the pitch and gradually build their way back into the game.

Worst of the Week – Bournemouth's problem at right-back

For the second successive match at Dean Court, Bournemouth's defensive problems were exclusively in their right-back position. Nathaniel Clyne has played poorly since arriving on loan from Liverpool, and following some positional errors in the 2-2 with Newcastle in mid-March Clyne was twice at fault on Saturday.

First, he did not get across quickly enough to shut down the danger and was forced to concede a corner, from which Burnley equalised, and then Dwight McNeil easily beat him on the dribble to set up the second goal for the visitors. Clyne was eventually hauled off. Eddie Howe needs a new right-back.