When a Jose Mourinho team performs badly everybody knows about it. It stinks the place out. All of the game's great managers lose matches unexpectedly, of course. All have overseen peculiarly lifeless performances. But none quite do hopelessness like Mourinho.

The reason for that is purely tactical - and with Marcelo Bielsa's arrival in the Premier League, that will become increasingly clear.

What distinguishes Mourinho from the modern elite manager – from the likes of Pep Guardiola, Jurgen Klopp, Antonio Conte, and Julien Nagelsmann – is his inability to coach the 'automatisms'; the pre-set attacking moves practiced repeatedly in training. All of the top possession teams in Europe invest considerable time in the intricate tactical details of passing lines, swapping traditional creativity in the final third for automatic responses. This allows them to think and act several steps ahead, to move in a synchronised way that only gives the illusion of improvisation.

By contrast, Mourinho is still stuck in the 2000s, when such automatisms were extremely rare. He expects his players to use their imagination in possession, working from the belief that defensive positioning and psychology are the more difficult skills to coach – and that, if he sets his team up to produce counter-attacking scenarios, top-level forwards will utilise the spaces without the need for further instruction.

Inevitably that means nobody is thinking three steps ahead: you pass, then you move, second-guessing what your team-mate might want to do, but not knowing enough – not having the muscle memory – to make a decoy run that creates space for the next runner. It also means that when confidence takes a knock creativity fades, leaving you with hesitant sideways passing and risk-averse movements.

This is precisely what happened in the 1-0 defeat to Everton. From the outset, the forward-thinking energy of James Rodriguez and Allan gave Carlo Ancelotti's side the impetus to push Spurs back and convince them they were the inferior team. Harry Winks and Pierre-Emile Hojbjerg (too similar and too conservative to sit side-by-side) had to free think where to play the ball, and without the knowledge of the knock-on effect of a forward pass were searching for either a killer, line-splitting ball or a safe one.

The poverty of thought that comes from a lack of automatisms was best captured in how Dele Alli did and didn't make space. He began the match dropping intelligently into pockets of space between the Everton defence and midfield, making himself the only forward pass option for any of the Spurs players. But after ten minutes of failing to get the ball, he seemed to give up altogether, drifting closer to Harry Kane and becoming a passenger before getting substituted at half-time. 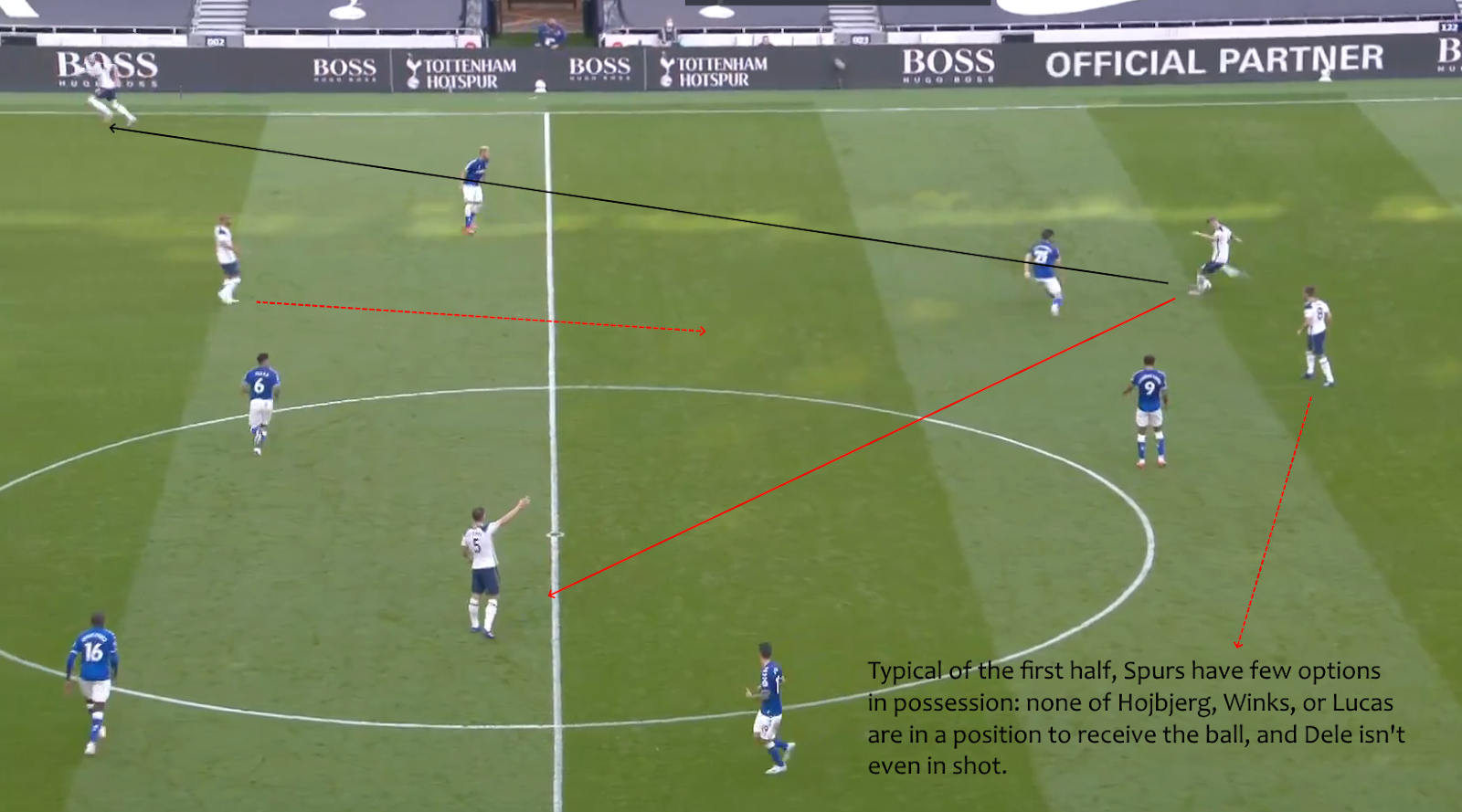 It is easier to understand why Dele wasn't given the ball once you understand that possession football and positional rotations/interactions are not coached at Spurs. Winks or Hojbjerg could have passed to Dele, but then what? There was nobody close enough to the Spurs attacker to guarantee the next ball would work, and so, unsure of progress, the midfielders retreated to the safe option – to the least risky outcome, as preached by Mourinho across his career: 'the game is won by the team who commit fewer errors', as the infamous mantra goes.

For Tottenham fans, Sunday's lacklustre defeat must have been particularly hard to watch 24 hours after Bielsa's Leeds United had entertained so spectacularly at Anfield. Bielsa's influence on the Premier League could be huge. He will show up some of the coasters. He will expose some of the myths about British fire-fighter managers. He will exemplify just how far resources can be stretched with tactical coaching alone.

Few Premier League teams will be as rigidly disciplined as Bielsa's Leeds this season, which might sound somewhat paradoxical given how chaotic they will look. But the chaos is choreographed to exact dimensions, hence the overwhelming boldness of each player's movement: they trust the wider system and understand their role as a single cog within it, making bursting runs and vacating defensive positions with total faith in themselves and the manager.

That is what 'automatisms' look like, and the maverick intelligence of their attacking play at Anfield is what it can lead to. All of the classic Bielsa traits were on display in full force on Saturday: man-to-man pressing, in which players are happily pulled out of position to track individual runners; gung-ho forward runs to put up to five players on the shoulder of the last defender; and bunched triangles on the flanks that see central midfield completely emptied.

The result of that was somewhat predictable. Liverpool's high defensive line struggled with all those runners, and even Virgil van Dijk looked confused by the number of midfield runners bursting ahead of the play late in a move. But Jurgen Klopp's side were constantly dangerous in the transition, breezing forward through the empty central areas to create chances, while their front three enjoyed pulling the Leeds defence badly out of shape. 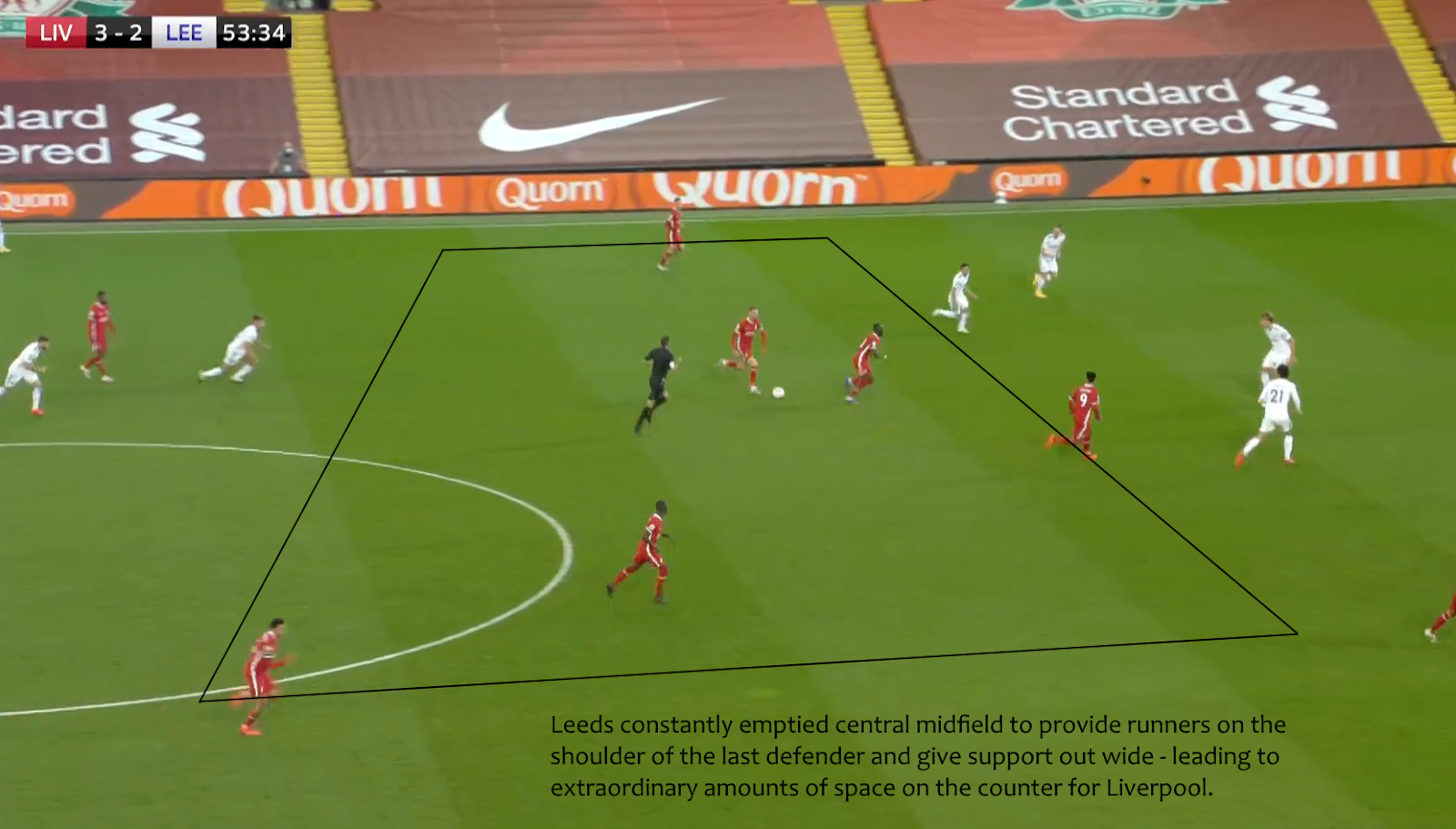 On the one hand, Leeds held the majority of possession (51%) and made more tackles at Anfield (33) than anyone since Klopp became manager, a testament to how Bielsa's ravenous high press unsettled the hosts. On the other hand, they scored from their only three shots of the game and the xG score was 3.15 to 0.27. Leeds aren't going to get away with that sort of anomaly every week.

Nevertheless it was an early lesson for Premier League owners in the value that automatisms and tactical intelligence can add to a set of players. Tottenham fans might already be jealous. And Mourinho, looking all the more out-dated when the Bielsa comparison is so close to home, might be getting a little nervous.