Liverpool's hectic December schedule has been worrying their supporters for quite some time now, but as Manchester City dropped yet more points at Newcastle the threat suddenly seems minimal.

Jurgen Klopp's side hold an 11-point advantage over a weary City team highly likely to drop more points before the year is out.

Leicester City are technically still in the title race thanks to Kelechi Iheanacho's injury-time winner against Everton, although realistically fans should be focusing on the 12 point gap they have opened up to fifth. A Champions League place seems secure, which is more than can be said for Chelsea. Successive defeats puts them just six ahead of Jose Mourinho's Tottenham.

Arsenal attempted to press high up the pitch and hold a high line in a very attacking 4-2-1-3 on Sunday, a tactical battle plan they simply were not ready for. Norwich should have scored five or six on a dreadful debut for interim manager Freddie Ljungberg, who was made to pay for deploying such an open system and fielding many of Arsenal's weakest players.

Unable to compress their shape or press collectively, Arsenal's attacking setup meant they were stretched all over the pitch, allowing Norwich to counter-attack with ease – particularly down Arsenal's right, where Callum Chambers was repeatedly caught out of position. Ljungberg instructed his full-backs to get forward, and with Joe Willock pushing on to make a front four that left far too few Arsenal players back. That one of these players was Shkodran Mustafi only made things worse.

Only Ljungberg knows why Mustafi, Granit Xhaka, and Mesut Ozil all started his first game in charge, or why he went for such aggressive and risky tactics when managing a team whose confidence is easily knocked. In his defence, Arsenal did start brightly, Ozil dropping neatly into pockets in the left half-space to build momentum… but it quickly evaporated.

Newcastle's narrow 5-4-1 formation is very good at closing off the centre of the pitch, and Man City haven't been attacking through the middle with much fluency this season ever since Fernandinho was moved to centre-back and Kevin de Bruyne oddly redeployed on the right. David Silva and Raheem Sterling combined in short bursts on Saturday, but overall it was too easy for Steve Bruce's side to keep their shape.

Arguably the main reason for that was City's lack of overlapping full-backs, meaning nobody was pulling Newcastle across the width of the pitch – or making the sort of runs in behind that Leroy Sane has done over the last two years. Kyle Walker sat as an inverted full-back in central midfield throughout the game in order to cut off Newcastle's counters (it didn't work) while Benjamin Mendy looks completely bereft of confidence.

Between them, Mendy and Walker had just 22 touches in the final 18 yards of the field. City's bizarre focus on crossing continued - playing right into the hands of a powerful three-man defence - while Gabriel Jesus didn't move as well as Sergio Aguero. All in all City were sluggish and disconnected; their title race is over. 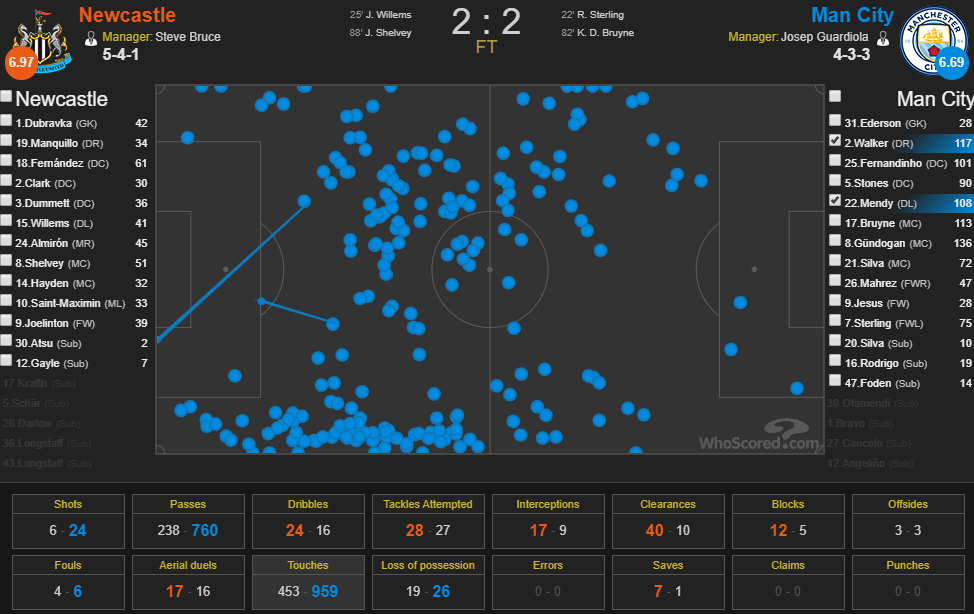 The most important tactical feature of Tottenham's 3-2 win on Saturday was the long balls forward from Toby Alderweireld, who created the first two goals for Dele Alli with the sort of direct football not seen for a couple of years at Spurs. Jose Mourinho has clearly instructed his team to get the ball forward quicker, with Dele the chief beneficiary of the creative freedom afforded by the new manager.

Dele was excellent again, making runs beyond Harry Kane as well as dropping into the number ten position when appropriate. However, Tottenham only really found their rhythm after the first goal and even then only looked sharp when counter-attacking through Heung-Min Son and Dele, largely because their midfield lacked the technical quality to control the rhythm of the contest. Eric Dier, Moussa Sissoko, and Tanguy Ndombele all struggled to dictate the tempo.

If Mourinho brings Christian Eriksen back into the team then Spurs should exert more control, in turn preventing those late collapses; counter-intuitively, the Dane would be a better defensive option for Tottenham than Ndombele or Sissoko. 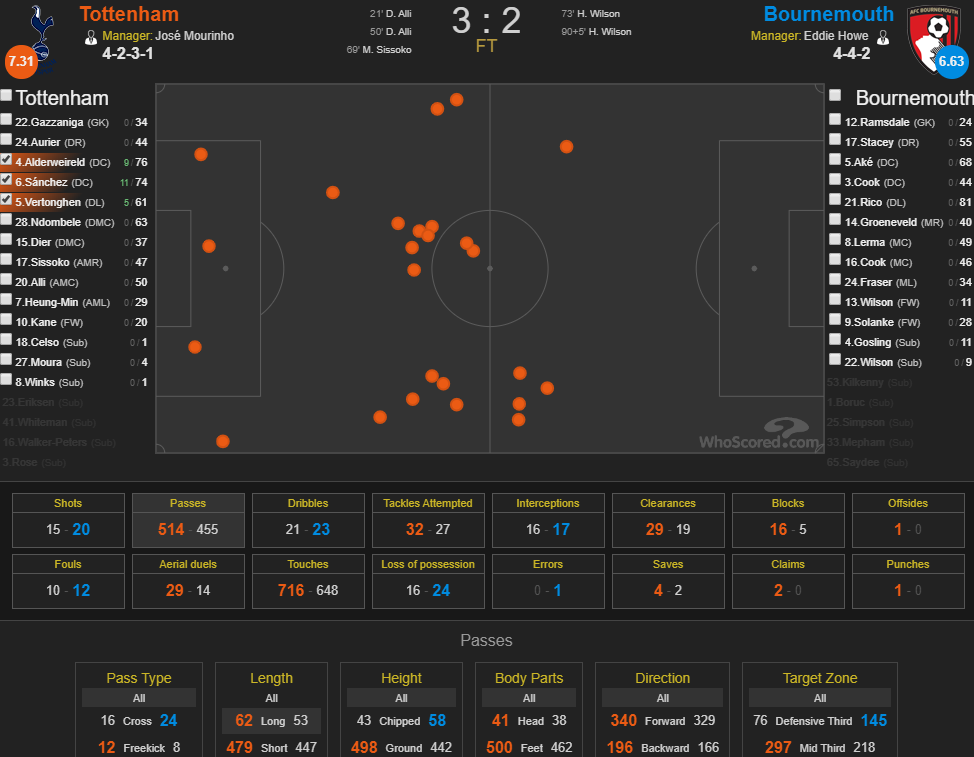 Kelechi Iheanacho was the forgotten man at Leicester, but not anymore. He came off the bench for the final half an hour on Sunday to grab a goal and an assist that kept Brendan Rodgers' side in the title race. The manager deserves credit for the tactical switch that accompanied the substitution.

Iheanacho played up front with Jamie Vardy, rather than on the right like Ayoze Perez, meaning Leicester were in a 4-1-2-1-2 with no right winger. Suddenly Leicester had four attacking players through the centre, overwhelming the Everton midfield, and began to play lots of long balls over the top for the two strikers. Rodgers has come up with an excellent plan B.

Worst of the Weekend – Chelsea's defeat to West Ham

Frank Lampard didn't get much right on Saturday, his five changes disrupting Chelsea's flow to both stunt them in attack and further accentuate their flaws in defence. Chelsea are still weak in the transitions and easily countered by savvy opponents, which is why a counter-attacking team like West Ham were not the opponents to face without N'Golo Kante. It was Jorginho's positional error, dropping deep when he should have stepped up, that allowed Felipe Anderson to create the winning goal.

Going forward, Chelsea were stumped without the movement and agility of Tammy Abraham (Mount and Christian Pulisic needed someone to feed), plus Willian's absence meant they had nobody to break the lines and carry the ball forward. It always seemed likely that Chelsea would fall away in a gruelling December. This could be the start of a very difficult month for Lampard.