Unai Emery might not last much longer like this. Arsenal were by no means embarrassing on Saturday afternoon, but yet again they dropped points.

Yet again Emery made some strange tactical decisions, and yet again they were broadly outplayed by supposedly inferior opponents. Wolves were very good – compact, organised, and piercing down the flanks – but after a frantic final 15 minutes will travel back to the Black Country ruing a missed opportunity.

For Arsenal, a loud chorus of boos at the final whistle is becoming all too familiar. This one will go down as another confusing and frustrating Arsenal performance at the Emirates.

Under Emery, the only constant is change. He took everyone by surprise on Saturday by starting in a diamond 4-4-2 formation with Mesut Ozil at the tip, which was a remarkably narrow system to use when facing a team with aggressive wing-backs. Perhaps the idea was that Wolves would actually be more dangerous creating through the middle via Diogo Jota and Raul Jimenez, or perhaps Emery thought wingers would be negated by Wolves' shape. Whatever the reason, it didn't quite work.

Right from kick-off Wolves were dominant down both flanks, consistently finding themselves two-on-one against the Arsenal full-back as the hosts' widest midfielders, Lucas Torreira and Dani Ceballos, struggled to get out there and help. While Jota drifted into the half-spaces, picking up the ball in front of Callum Chambers before giving him a torrid time on the inside while Jonny overlapped, Adam Traore hugged the touchline and consistently dribbled clean past Kieran Tierney.

Jonny and Jota completed seven dribbles and seven key passes between them, reflecting their dominance of a clearly overwhelmed Chambers. It was the key area of the match for long periods – Wolves had 25 shots to Arsenal's 10 – and yet the visitors' failure to take advantage of their early pressure ultimately cost them. 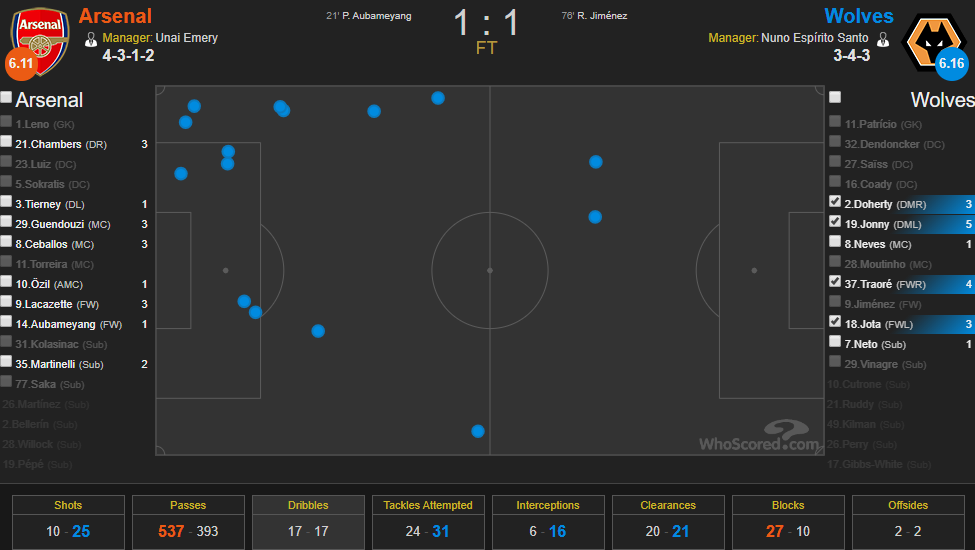 2) … but the diamond also means midfield dominance, leading to the opener

Gradually Arsenal grew into the game, and soon enough the main benefit of Emery's diamond 4-4-2 was revealed. Defensive injuries meant Wolves have recently moved from 3-5-2 to 3-4-3, leaving just Joao Moutinho and Ruben Neves to hold midfield; Arsenal, then, created a four-on-two situation that allowed them to dominate the ball and build attacks directly through the centre.

It was only partially successful in the end, largely because Neves and Moutinho were outstanding, but it did lead to Arsenal's goal. Technically the goal came out of nothing, a throw-in down the right and two passes amid a sleeping Wolves defence, but the pressure had been building. The reason Wolves were so deep, and struggling to track runs, was because Arsenal's midfield shape was wearing them down. Ozil and Ceballos in particular played crisp, high-energy football for the first 30 minutes.

The goal was also a neat example of the link-up play between Alexandre Lacazette and Pierre-Emerick Aubameyang, who were only close together in the box because of Emery's formation. It had big downsides, but there were plenty of upsides too.

Arsenal had just three shots in the second half. As is often the case at the Emirates the game was allowed to drift, and the midfield (up until a formation change in the 73rd minute) began to search to no avail for runners or forward passes. Ozil lost his edge, and as Jimenez held up the ball well Wolves started to play a more direct game, counter-attacking with fluency to break up Arsenal's football.

It was typical of Arsenal's creativity problems, and while there is no easy solution blame can be placed on Emery for some unusual substitutions. He left Pepe on the bench and brought Gabriel Martinelli on for Lacazette, which not only meant withdrawing a goal threat but also saw Martinelli drift into an odd, harmless wide right position. Arsenal didn't immediately change out of their diamond, but now they had one forward and one right winger.

Heated conversations between Emery, holding up one finger, and several of his players suggested they were a bit confused about the tactical switch too. Unsurprisingly, Wolves began to crank up the pressure, once again feeding Traore and Jota whenever they could to drive at the Arsenal full-backs. 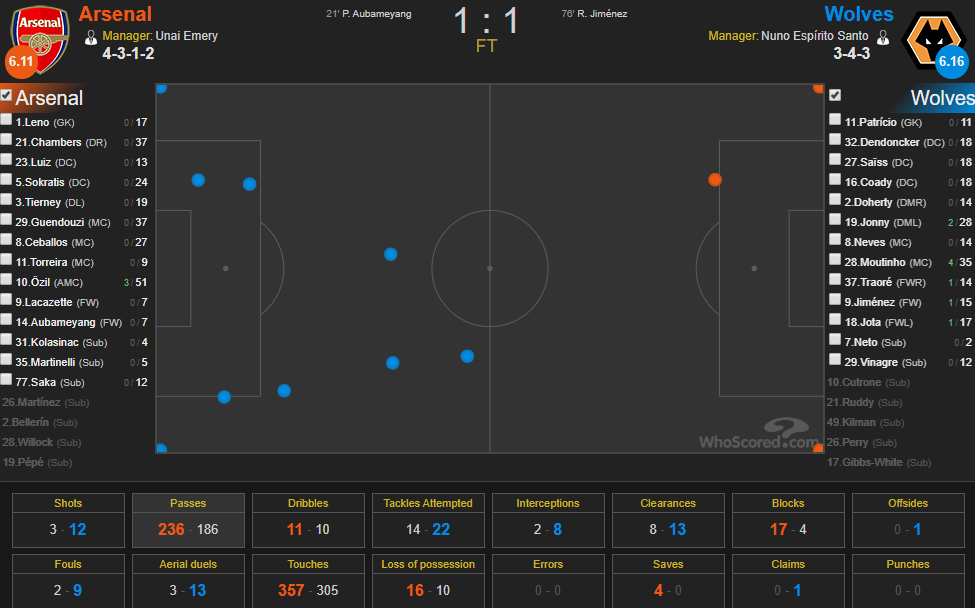 Emery moved to a 4-2-3-1 in the 73rd minute, primarily to offer additional support out wide against Wolves' wing-backs and inside forwards – who looked increasingly threatening as the half progressed. Martinelli, now firmly a right winger, and Bukayo Saka, on the left, sat in to make a flat four in midfield when Arsenal were out of possession.

Unfortunately, it didn't work. Within minutes Wolves were level, Arsenal switching off at a throw-in to allow Moutinho to cross for Jimenez. The attack, and subsequent throw-in, came from Traore and Matt Doherty pummelling the right wing; Saka couldn't track the run and Traore powered past Tierney, turning several times before winning the throw.

Credit to Nuno for sticking to his guns for so long. It must have been tempting to switch to a 3-5-2 given how many bodies Arsenal had in midfield, but eventually Wolves' persistence paid off.

The final 15 was end-to-end and either side could have snatched the winner, mainly because Arsenal's formation switch (and sudden desperation to score) left a lot of holes for Wolves to gallop into. For starters, one less midfielder opened up new pockets for Traore and Jota, who cleverly changed their runs. On top of that, Chambers and substitute Sead Kolasinac made considerably more overlapping runs, inevitably tempting Wolves into breaking forward in numbers.

Both players ran straight through the centre towards the end of the game, leading to the two biggest chances post Wolves' equaliser. In fact, had Jota not fluffed his lines in the penalty box a 2-1 win, courtesy of a fluid Wolves' counter-attack, would have more accurately captured the pattern of this match.

Arsenal's risk-taking could have worked, mind, because an elongated pitch and end-to-end movement caught Wolves out of position just as much as it did Arsenal. Ozil suddenly became influential again after a quiet second half, running the channels well to link with Saka and Aubameyang. Ultimately, it came to nothing.