Kroos: I was joining Man Utd - then they fired Moyes

The New Years' Day Premier League fixtures were arguably the best round of the festive period, which now mercifully draws to an end with bodies strewn across the treatment tables, nursing easily preventable muscle injuries.

Manchester City and Everton gave us a brilliant tactical chess match at the Etihad, Arsenal looked superb under Mikel Arteta, and Aston Villa finally put in a strong performance thanks to a new formation.

Here are three tactical things we learnt from the midweek action:

Man City v Everton was one of the best tactical battles of the season so far. Carlo Ancelotti began in a 3-5-2 formation with three narrow, compact central midfielders blocking City's path through the midfield, which forced the hosts – in a 3-4-2-1 – to pass harmlessly in a U-shape from flank to flank. Their two inside forwards, Riyad Mahrez and Phil Foden, had to move out wide.

Everton then switched to a flat 4-4-2 after 20 minutes but City didn't react, meaning Ancelotti had successfully dictated Man City's passing lines to them despite ultimately falling back on his preferred shape. However, at half-time Guardiola clearly told his players what was happening and reminded Foden and Mahrez to go searching for spaces through the middle – where Everton now only had Gylfi Sigurdsson and Fabien Delph defending the zone.

Sure enough City immediately dominated. Ilkay Gundogan was able to set up Gabriel Jesus for the first goal because the two inside forwards had distracted Everton and pulled them out of shape. The second goal was directly created by Mahrez and Foden exchanging passes in the number ten zone. 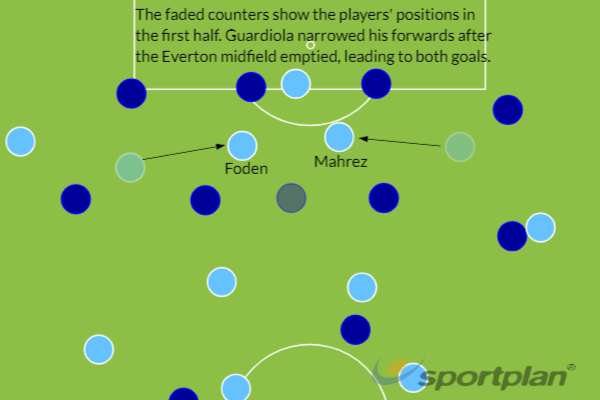 Mikel Arteta's tactics already look more complex and specified than anything we saw under Unai Emery, and while his plan deserves close attention it should not be overlooked that he achieved this first by inspiring his team to play with aggression, determination, and focus. Their energy – not just in the press or searching for space, but collecting loose balls and helping one another – provided the foundation.

You need to be a motivator and a tactician to pull off Pep Guardiola tactics. Arteta deployed Ainsley Maitland-Niles as an inverted full-back to create a three-man central midfield with Lucas Torreira and Matteo Guendouzi, providing Arsenal with a rock solid defensive screen that could cut out the Man Utd counters at source. As importantly, these three played quick vertical passes whenever possible to keep Arsenal on the front foot – and feed a front five perfectly in sync.

Guardiola works hard on the training ground to ensure his players take up unique positions; no two players should occupy the same space vertically or horizontally, creating natural triangular passing options in the final third. Arsenal did exactly that on Wednesday, with Sead Kolasinac and Nicolas Pepe syncing on the flanks, Pierre-Emerick Aubameyang cutting inside, Alexandre Lacazette dropping off, and Mesut Ozil filling in wherever the other four were not.

During Aston Villa's poor run of form they looked far too open at the back, lacked cover on the wings, struggled to get attackers close to Wesley, and relied too heavily on Jack Grealish affecting the game from out wide. It made perfect sense, then, to trial a 3-4-2-1. It has, in truth, been a long time coming.

A three-man defence certainly improved Villa at the back, with Tyrone Mings' recovery tackles making up for any lapses, while Frederic Guilbert benefitting from extra freedom moving forward. Most importantly, Grealish and Trezeguet - as inside forwards - gave Wesley the help he has needed as the Brazilian put in his best performance of the season.

His injury, putting him out for the rest of the season, is a hammer blow for the club. Tom Heaton is also out for several months, and so unless Villa sign two or three new players this January window they will go down – no matter how good their new 3-4-2-1 might look. 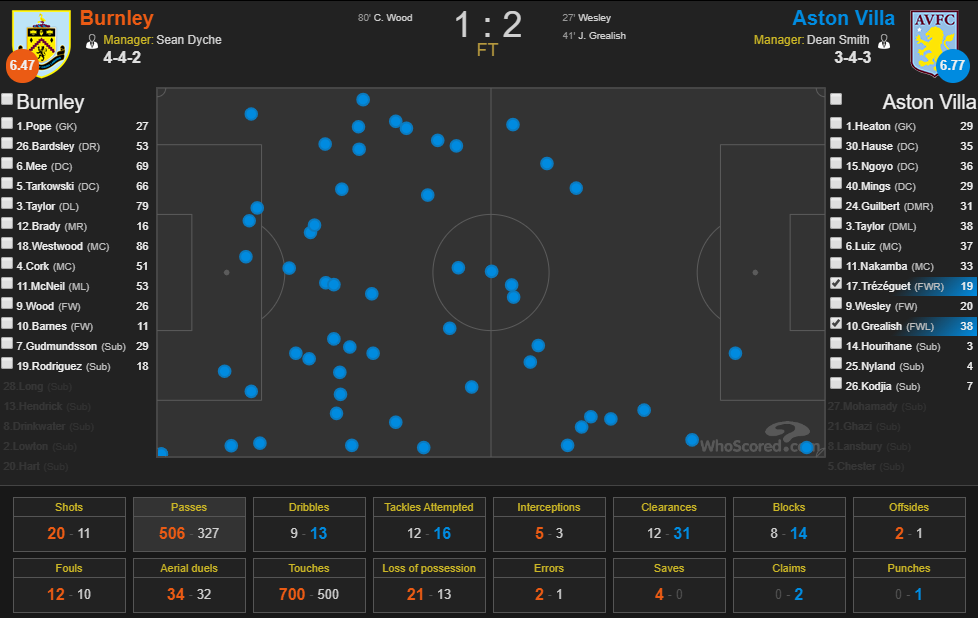 During the more erratic period of Jurgen Klopp's tenure, when things first came together and Liverpool reached their first Champions League final under the German, it was easy to define their style; gegenpressing and a fluid front three. What is most impressive about the current incarnation is their sheer malleability. It is no longer possible to define what Liverpool are because they do pretty much everything perfectly.

On Thursday evening, they scored the first goal from a long Virgil van Dijk ball over the top – and there were plenty more of these in the 90 minutes. They then created numerous chances via their full-backs bursting forward, before scoring a counter-attacking second goal via a genius one-two between Mohamed Salah and Sadio Mane. Every player on the team can create chances, and Klopp's team can hurt you in a multitude of ways.

That's why nobody can figure them out, and nothing can stop them.

Worst of the Week – Bournemouth's slide

Eddie Howe's team historically string together runs of wins and runs of defeats, meaning we don't tend to panic these days when they are on the slide. But 2019/20 is starting to feel different. Bournemouth have only picked up seven points from their last 11 matches, and those came against Chelsea, Man Utd, and Arsenal. They are only able to rouse a good performance when sitting very deep and countering.

That won't keep them up, not with so many relegation six-pointers coming up now the Cherries are in the bottom three. Their collapse at West Ham was a new low. Ryan Fraser is a shadow of his former self and Bournemouth lack goalscorers, but more important is their passivity off the ball.