There is something about the style of Leicester City's results this season, the mood music that surrounds each win or defeat, that has excluded them from serious consideration to lift the Premier League title this season.

Perhaps it is the erratic nature of their results; the lack of an obvious identity or rhythm to how Brendan Rodgers side are picking up points. Leicester have lost to Fulham, Aston Villa, and West Ham this season but beaten the likes of Leeds United and Arsenal. They have been on a six-game winning streak in all competitions at one point, but lost three out of four on two separate occasions.

There is nothing about this staccato pattern that ought to affect our perceptions of their title credentials. It might feel more inconsistent, more random, than the soothingly knowable strengths and flaws of Liverpool or Tottenham, but a quick glance at the league table contradicts that sense.

Leicester are one point off the top. They've won more games than anyone else. They boast a squad depth that few of the traditional 'Big Six' can match. It is strange, then, that Leicester, winners just four years ago, aren't taken more seriously.

More importantly, Rodgers has made a crucial tactical change in recent weeks that has helped make the Foxes more consistent. The 4-1-4-1 used for long stretches of last season has been put on ice since the 1-0 defeat to Villa in November and replaced with a more fluid 3-4-2-1.

In this shape Leicester can pack the team with number tens behind Jamie Vardy, which makes room for the likes of Ayoze Perez, Harvey Barnes, and Cengiz Under to be fielded close to James Maddison, increasing the number of bodies in those dangerous half spaces. Throughout his career Rodgers has preferred to filter attacks through the middle, preferring playmakers to traditional wingers, and in a 3-4-2-1 he gets to funnel Leicester's play in a more direct route through to Jamie Vardy.

It has also released the potential of James Justin, a talented young full-back who was often caught out defensively in the 2019/20 season but is flourishing in a more attacking, and more secure, wing-back role. Justin, who can play on the left or on the right, was the best player on the pitch in the 3-0 win over Brighton last time out.

Aside from these two tweaks, the new formation hasn't changed the tactical style of the team. Their basic features remain the same: progressive passes that cut the opposition lines are encouraged, creating explosive vertical attacks designed to catch the opponent off guard. 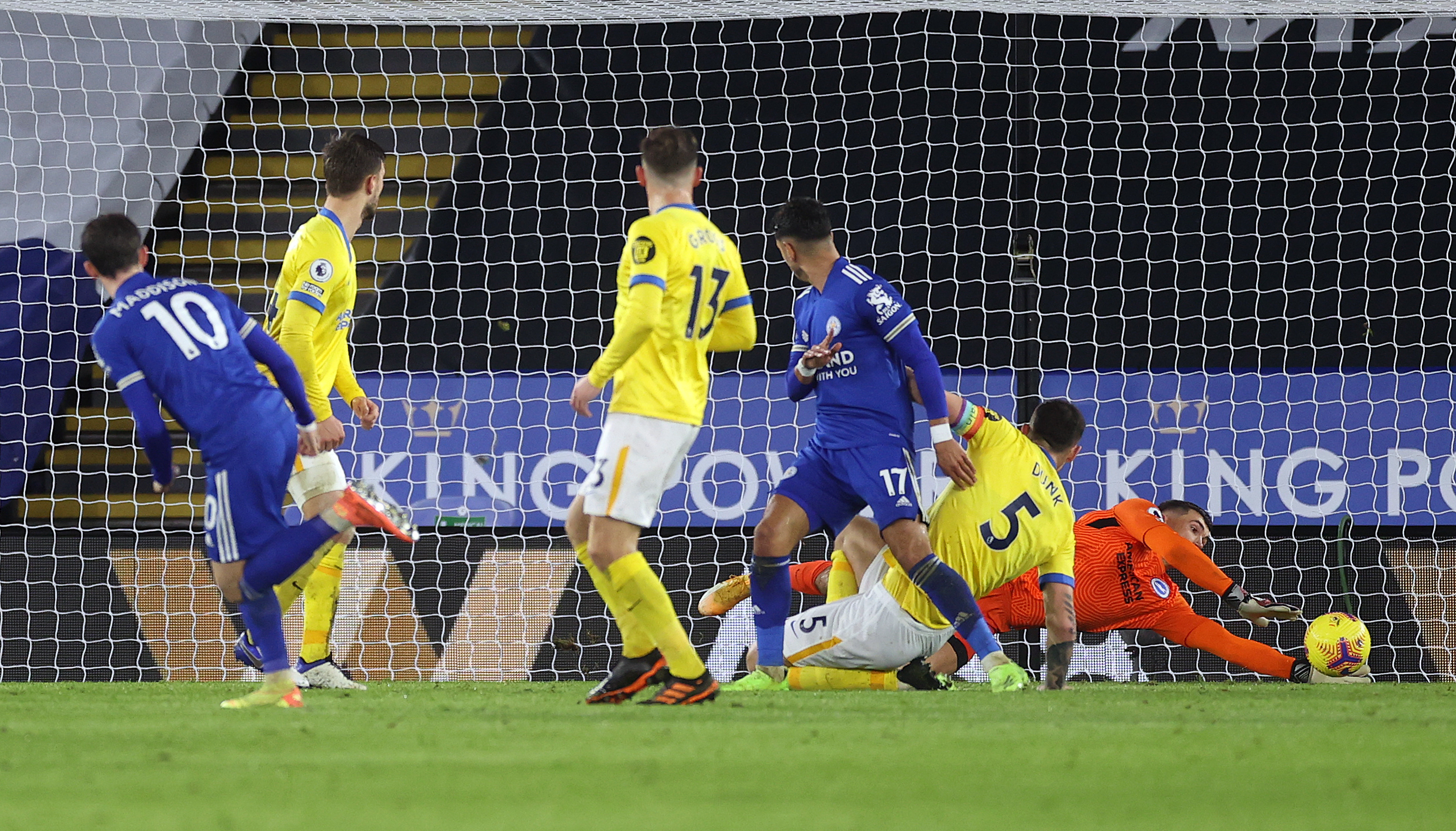 Youri Tielemans is a key player, as is Maddison's ability to receive the ball on the half-turn and instantly feed Vardy; that dramatic late goal against Sheffield United was the perfect example of how Leicester aim to suddenly up the tempo in key moments.

And although Maddison's absence was conspicuous earlier in the season – the Foxes were beaten by West Ham and Villa when the number 10 was out – on the whole Leicester's squad depth is enviable. Rodgers has been stockpiling intelligent, nimble-footed players who can make a telling difference late in matches; Under, Kelechi Iheanacho, Dennis Praet, and Barnes were all on the bench in the Brighton game. That is some serious strength in depth for the congested fixture list ahead.

And for further proof of the quality through this squad, note that Leicester find themselves in this position despite Caglar Soyuncu's continued absence and Wilfried Ndidi's injury limiting him to just three starts this season. Ndidi was back for the Brighton game to make an instant impact, as Leicester recorded their first clean sheet in four league games and only their third of the campaign.

There are still plenty of areas for improvement, of course, most notably at the back. Christian Fuchs remains a slight chink in the armour at left centre-back and with Jonny Evans alongside him Leicester do lack pace, hence the number of counter-attacking goals conceded this season. That Fulham defeat, though an anomaly in the context of the last few weeks, is a worrying sign of what a tricky winger – in this case Ademola Lookman – can do to Rodgers' back line.

But in this most unusual of Premier League seasons, clubs can afford to be flawed - and a bit inconsistent - while still maintaining a title challenge. The hectic fixture list has flattened pressing, has limited time for coaching in the week, has seen injuries pile up, and has wearied even the likes of Liverpool and Manchester City.

As we enter the busy Christmas period, the unique variables that have made 2020/21 so unpredictable will only become more pronounced. The winning points total this year looks set to be somewhere between 80 and 85, which puts as many as eight clubs in contention.

The last time the 'Big Six' struggled this much and the title-winning points tally was this low was 2015/16 – and nobody needs reminding of what happened that year. If Tottenham are in the running then so are Leicester. Only one of those clubs can draw on previous experience of winning the Premier League.