Four days before Christmas, Everton fans got an early present: a manager of world-class pedigree to guide them into 2020. Carlo Ancelotti was appointed manager on 21 December, and within days he earned his first victory in charge, a 1-0 home win over a tough Burnley side at Goodison Park.

The promising start was continued with a win away to a Newcastle United that aren't used to losing on home turf, and Ancelotti's men then competed with Manchester City in their own back yard before succumbing 2-1 to the reigning champions.

Ancelotti has won the Premier League before, with Chelsea, and picked up multiple Champions League titles with AC Milan and Real Madrid. His experience and charisma are exactly what is needed for a club with money to spend seeking improvement, and he already appears to be stamping his mark on Everton tactically.

Ancelotti appears to prefer a basic 4-4-2 system with two strong, quick and direct strikers up front in Richarlison and Dominic Calvert-Lewin. He used this strike pairing in two of his first three games in charge, only changing it for a front three where Richarlison moved towards the left-hand side and Moise Kean came in on the right against Newcastle.

Hampered by the absences of Morgan Schneiderlin, Andre Gomes and Jean-Philippe Gbamin, Ancelotti has had to persevere with one or both of Gylfi Sigurdsson and Tom Davies in central midfield roles with Fabian Delph providing the defensive grit and positional sense. Out wide, a lot of the width comes from Djibril Sidibe on the right and Lucas Digne on the left, though more natural wide men Theo Walcott and Richarlison were used against Newcastle.

Ancelotti's tactics have been flexible, and this is not surprising for several reasons. Firstly, he has always been an adaptable manager who bends his system to the players rather than the other way around. Secondly, he probably wanted to get a good look at his options before the January window opened up.

While his personnel and attacking shape have changed depending on the opponent, Ancelotti has stuck with a defensive 4-4-2 in all three games so far. The formation is chosen as the Italian feels it is the best one for a high pressing game, something he has emphasised since returning to English football. 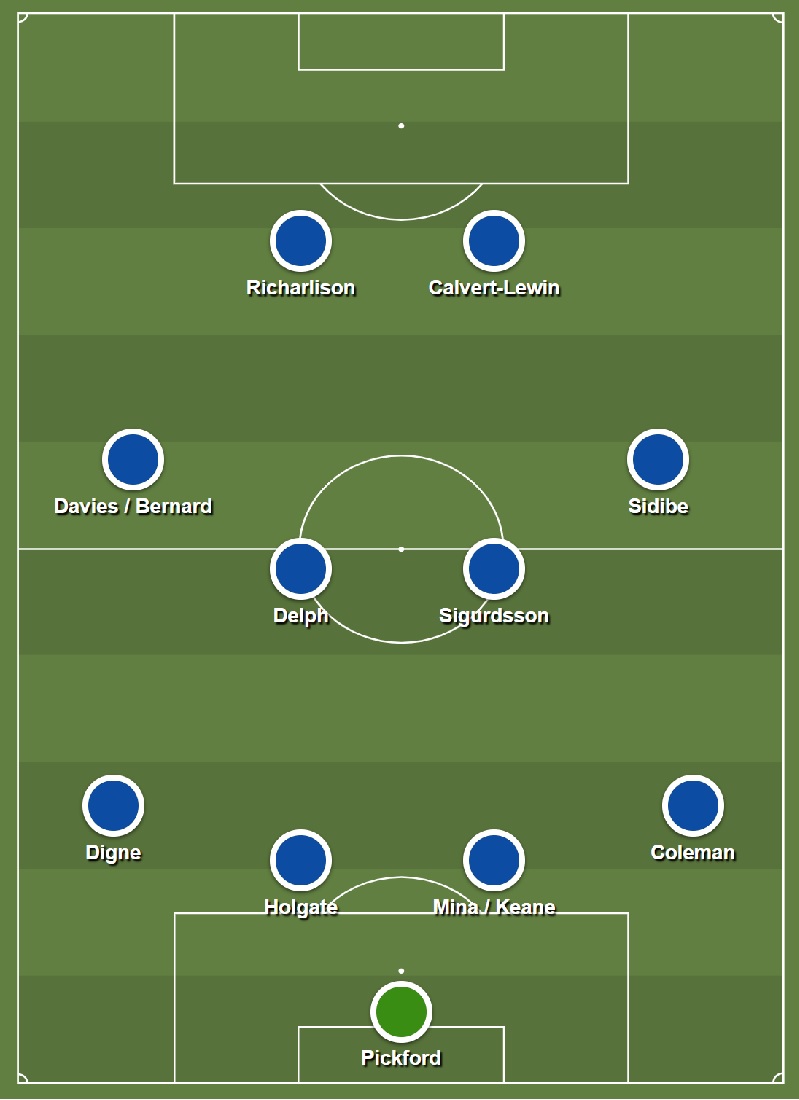 "In my opinion 4-4-2 is the best system defensively," he said. "There are a lot of systems in place, but you can cover more space across the pitch and press forward [in 4-4-2]."

High pressing led to Everton's goal in defeat to Manchester City, as they forced a mistake when their opposition tried to build out from the back. From there Everton counter-attacked quickly inside the final third and scored to give themselves hope of securing a point.

Unfortunately, not every Premier League team is as enthusiastic about playing out as Manchester City. Newcastle went much more direct, fielding both Andy Carroll and Joelinton up front and targeting their powerful strike duet with long balls from back to front. In this situation Everton's high press was completely avoided, and Ancelotti's side struggled to deal with the long ball game.

Everton's centre-backs consistently failed to win the first ball against Carroll, and the space between defence and midfield was at times too great to apply proper pressure or fight for the second ball. As seen below, both central midfielders are caught ball-watching statically; so when Newcastle bring the long ball down, Everton are unable to close down the ball-player. The main issue here was that both Everton central midfielders are not true 6s. Sigurdsson has spent much of his career as a No.10, while Davies is more of a playmaker. This underlined that, if Everton are to continue pressing high, they will need a midfield more adept at dealing with long balls. The presence of a more reliable No.6 – Delph, Schneiderlin or Gbamin, perhaps – should help.

During his time at Napoli, Ancelotti utilised a fluid system that morphed from 4-4-2 to something more complex when his team had possession. Early on in his Everton tenure a similar fluidity has become apparent. While Everton defend in a flat 4-4-2, in attack this becomes a 3-4-1-2 or 3-4-3.

Ancelotti has referenced this tendency publically, saying: "Offensively it can change, with two strikers or two wingers, so you may not recognise a system."

Against Burnley, the 4-4-2 became a 3-4-1-2. Seamus Coleman acted as a third centre-back in build-up alongside Yerry Mina and Mason Holgate, while Sidibe and Digne provided the attacking width and Bernard came in off the left wing to play more centrally as a No.10 behind Richarlison and Calvert-Lewin. Against Burnley's 4-4-2, Everton's two central midfielders could attract pressure from their individual opponents, creating space between the lines for Bernard to roam and receive in. 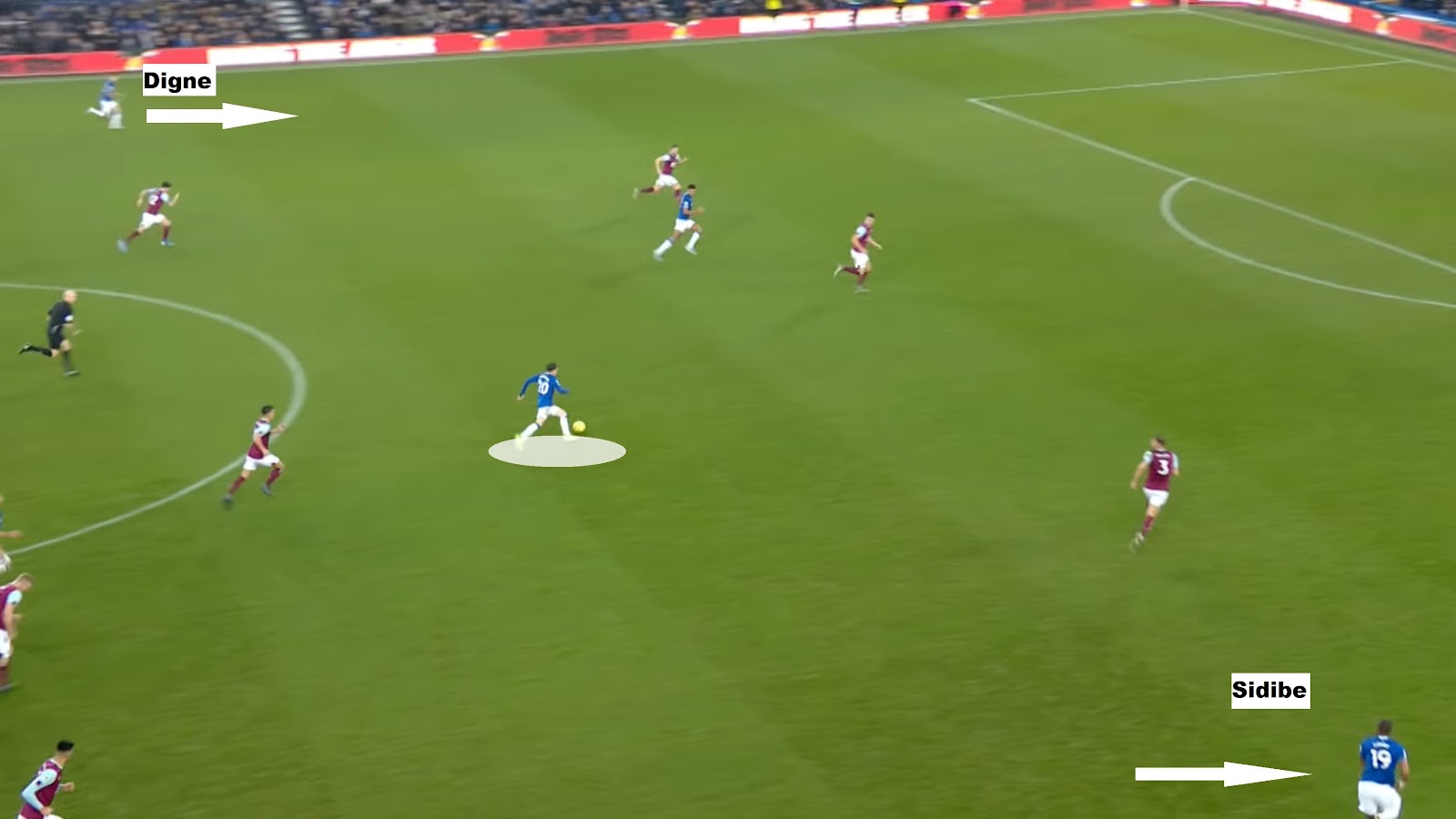 Then, away to Newcastle, the 4-4-2 became a 3-4-3 in possession. The front three took it in turns to make dropping movements away from the frontline, while the others would look to run in behind. This caused confusion and gaps in Newcastle's defensive line, as centre-backs would be drawn out and leave space for the other Everton strikers to run into. 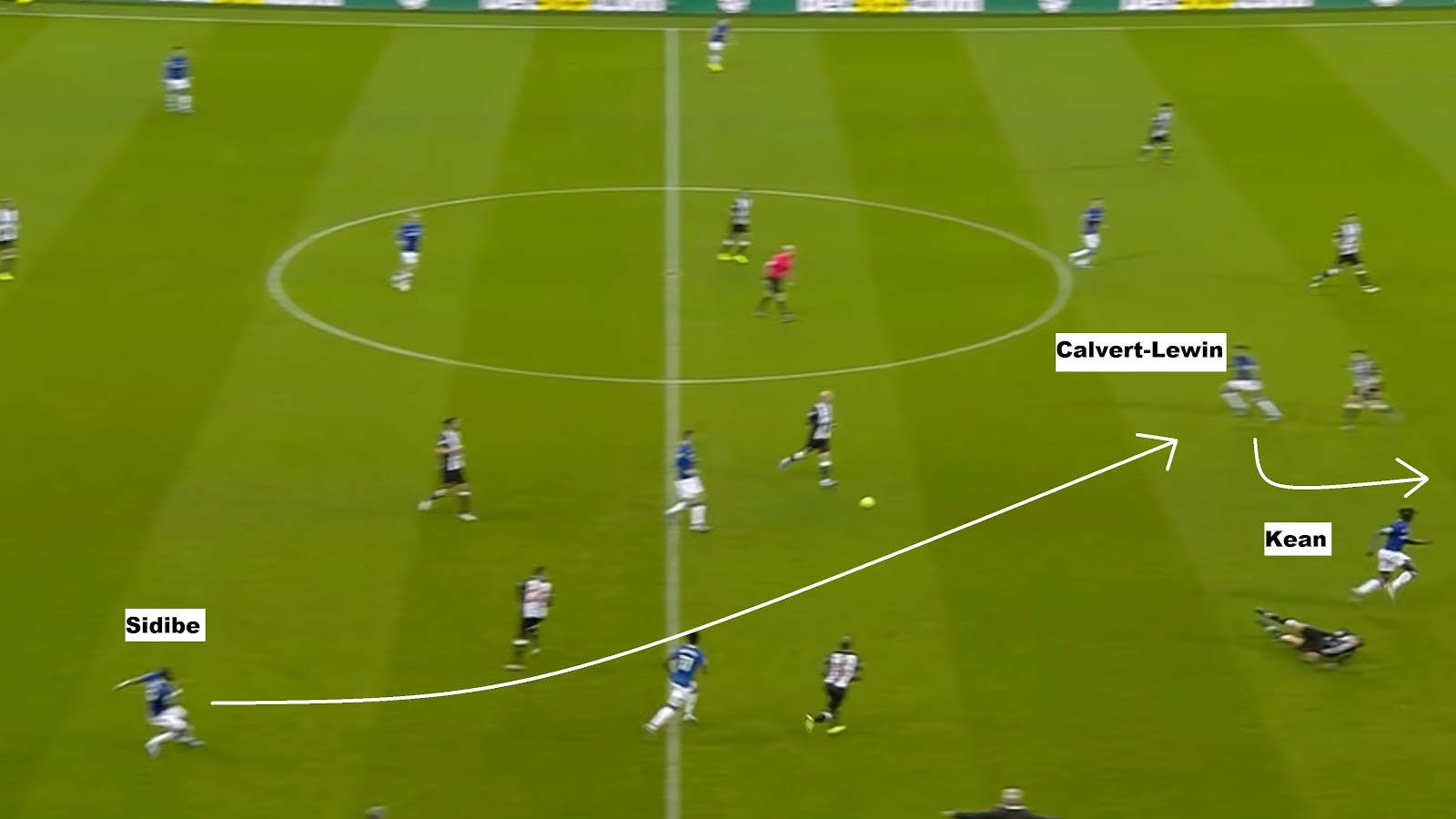 One benefit of going to a back three when building out is it gives an extra man, creating a potential numerical overload against the opposition's pressing (unless, of course, they decide to press high with a front three, but few Premier League teams do this). This can open up the possibility of having a free man to carry the ball forward or pick a pass.

Ancelotti's preferred attacking structure has also seen Sigurdsson playing deeper and being more involved in build-up, which makes use of his passing qualities. Indeed, the Icelandic playmaker received more passes in Ancelotti's first two games (36 v Burnley and 34 v Newcastle) than in any other league game this term. 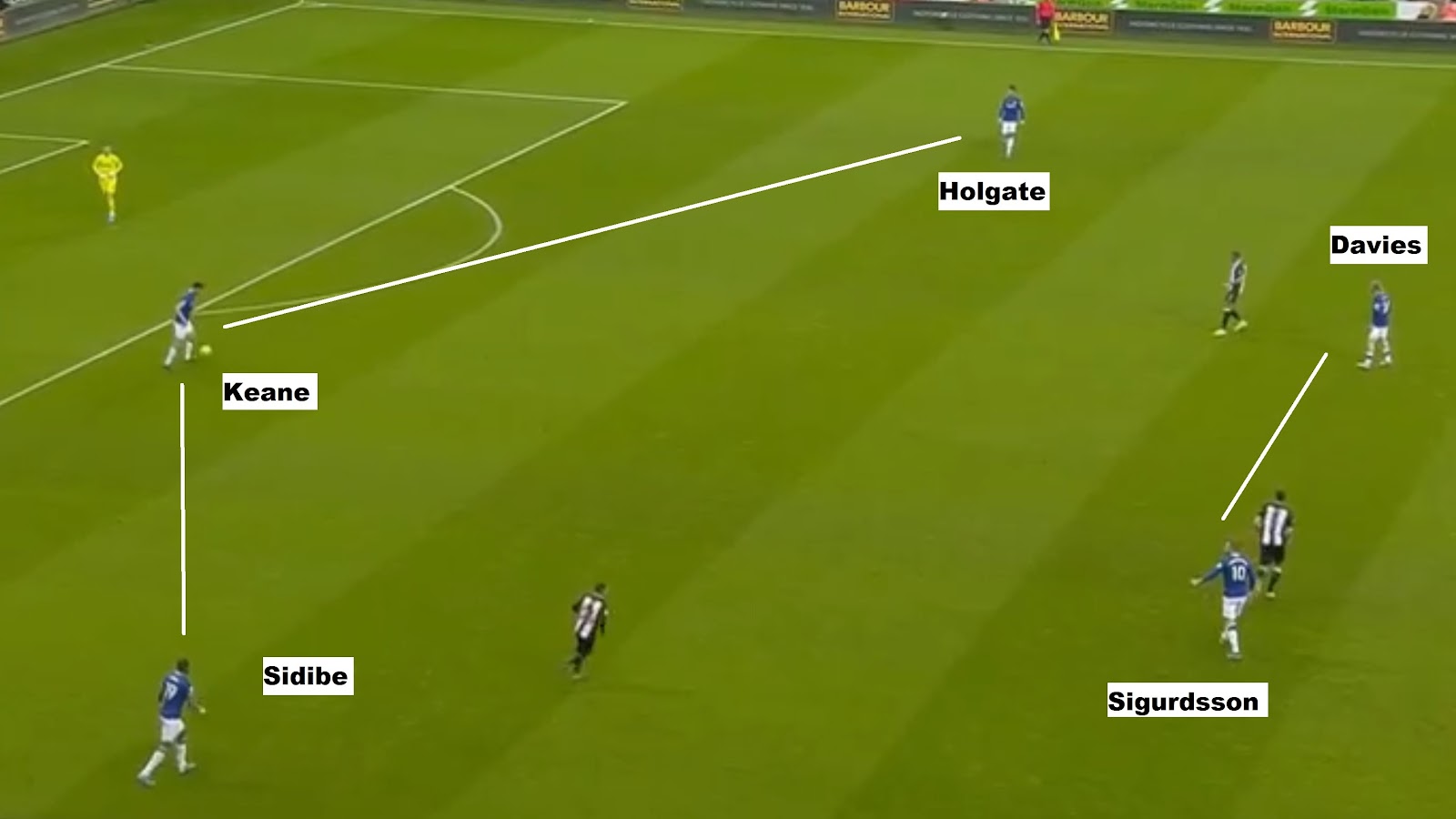 With a potential extra man in the first line of build-up, in Sigurdsson the presence of someone who can play forward accurately, as well as the wide out-balls provided by the wing-backs, Everton now have different ways to play out from the back and are not quite so predictable.

Going forward, their right-hand side looks very exciting. Sidibe was in the same Monaco team as Benjamin Mendy that reached the Champions League semi-finals, and both full-backs gained renown for their overlapping and exceptional crossing. Playing as a right wing-back means Sidibe can do more of the things he's good at – getting forward around the outside and getting balls into the box for the likes of Calvert-Lewin to attack.

Behind Sidibe, Coleman has been adapted into a progressive 'Sheffield United-style' centre-back by Ancelotti. The Irishman picks his moments to push on and makes runs inside Sidibe, as he did against Manchester City below. 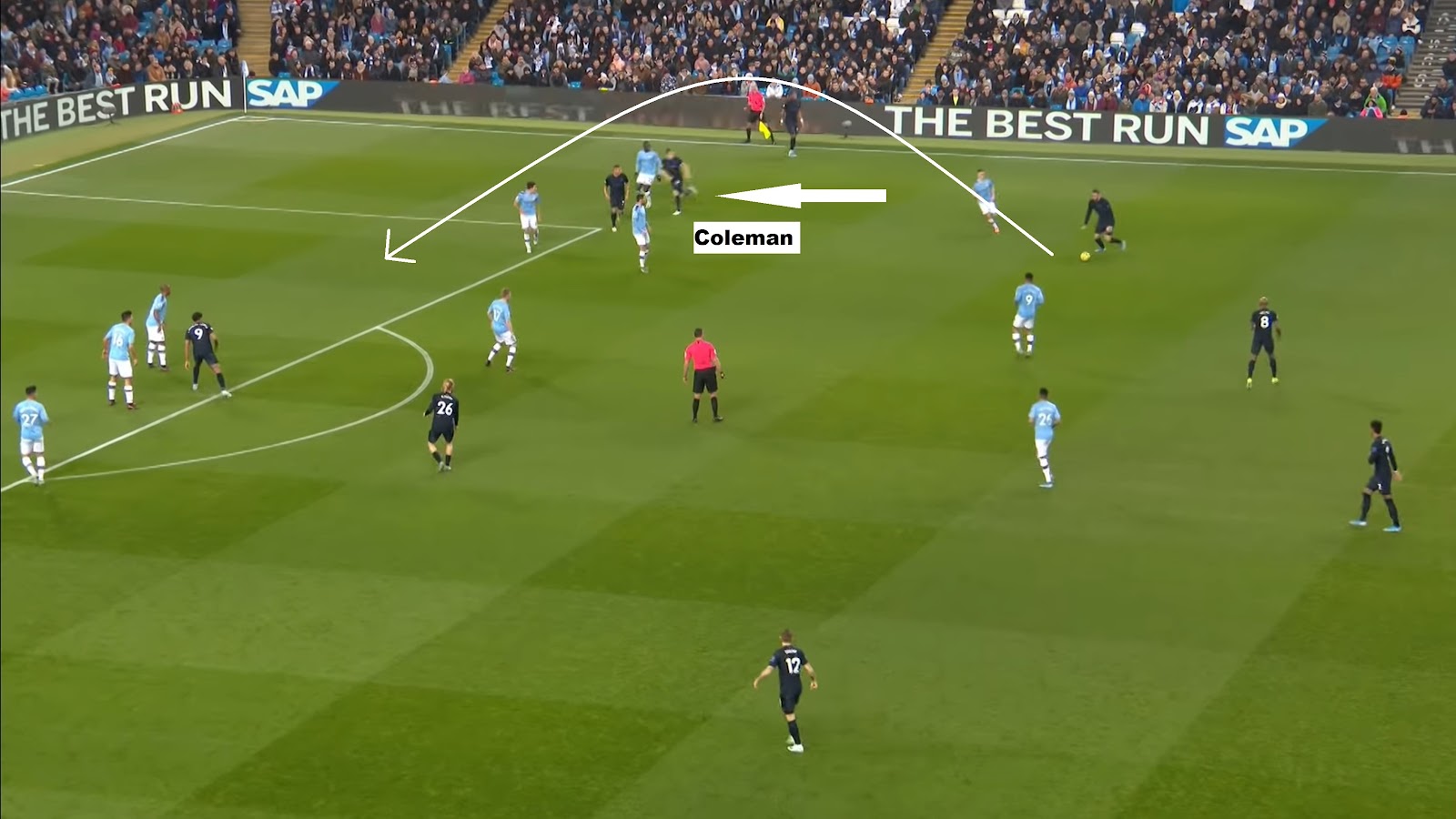 While Ancelotti has the same players to work with that his predecessor Marco Silva had, he has made an instant impact on the team. Not only has he provided a 'new manager bounce' with an upturn in results, but he has made effective tactical tweaks.

The fluid formation that changes from defence to attack, the back three giving an extra man in build-up, the forward runs of Coleman from centre-back, and the increasing influence of Sigurdsson on the team's attacking play are all a consequence of Ancelotti's management. All, so far, have worked well.

Throughout his long coaching career, Ancelotti has rarely failed outright. He almost always at least steadies the ship, and often he wins trophies. Everton have had ambition and money for a while, but now is the first time they have possessed a truly world class manager. With Ancelotti in charge, they finally have alignment between backing and belief off the pitch and direction on it.