Ole Gunnar Solskjaer has been in charge of Manchester United for over two years. In that time, he has failed to win a trophy. In six cup competitions, his side have been eliminated at the semi-final stage five times and the quarter-finals once. His highest league position is third last season. Quite clearly, the pressure is on him to collect some form of silverware this season.

A group stage exit from the Champions League was poor, though it does offer United the chance to win the Europa League. To do that, they will first have to negotiate a knockout tie with Real Sociedad – a team currently sitting fifth in Spain's La Liga.

Manchester United could have had an easier draw at this stage of the Europa League. Real Sociedad are a club on the rise, having improved their league position in each of the last two seasons. They are also in good form, losing just once and winning three of their last seven games in La Liga. On top of that, they have what it takes to make life uncomfortable for United over two legs.

Sociedad usually line up in some form of 4-3-3 formation, with two wide players either side of lone striker Alexander Isak. The 21-year-old frontman is in the form of his life, with nine goals to his name in 19 league appearances this season. He leads the line, offering runs in behind and a threat in the penalty box, not to mention the ability to score with either foot.

Isak is flanked by Mikel Oyarzabal on the left and one of Adnan Januzaj or Portu on the right. Januzaj will be familiar to United fans having played over 50 times for the club during the David Moyes and Louis Van Gaal eras, though he is no guarantee to start ahead of the more direct Portu. Another familiar face will be that of David Silva, the former Manchester City string-puller. The real star, however, is Oyarzabal.

At just 23 years of age, Oyarzabal is now enjoying his sixth season of top-flight football. He emerged from Real Sociedad's academy in 2014 and has since established himself as one of Spain's finest attacking midfielders. While on paper he is a winger in a 4-3-3, in reality he will play more on the inside, using exceptional touch to retain possession and link play. He also boasts a dangerous final pass, whipping in accurate crosses or penetrating with through balls.

Oyarzabal's play between the lines and Isak's threat in behind will pose problems to Manchester United. To mitigate the opposition, Solskjaer will likely field a 4-2-3-1 featuring two holding midfielders. Usually he opts for Fred and Scott McTominay in these situations, though the experience and composure of Nemanja Matic could prove useful in such an important European game.

There will be no Paul Pogba for the first leg – which will be held in his old home stadium in Turin, where he once played for Juventus. However, this isn't going to faze Solskjaer, who prefers to either bench the Frenchman or field him as a wide player in big matches. Without him, the main questions relate to the attacking four – does Solskjaer start with Edinson Cavani or Anthony Martial up front? In this case he may go for the latter to provide an injection of speed on the counter.

Sociedad do garner a significant amount of possession, though this is in part due to their pressing style – they are the third-most intense pressing side in La Liga according to Understat data. On average they only allow their opponents to make between seven and eight passes before forcing a turnover. They also foul consistently, and concede the fewest shots per game in Spain's top flight. Starting from a classic 4-1-4-1 shape seen below, they often pressure man-to-man. 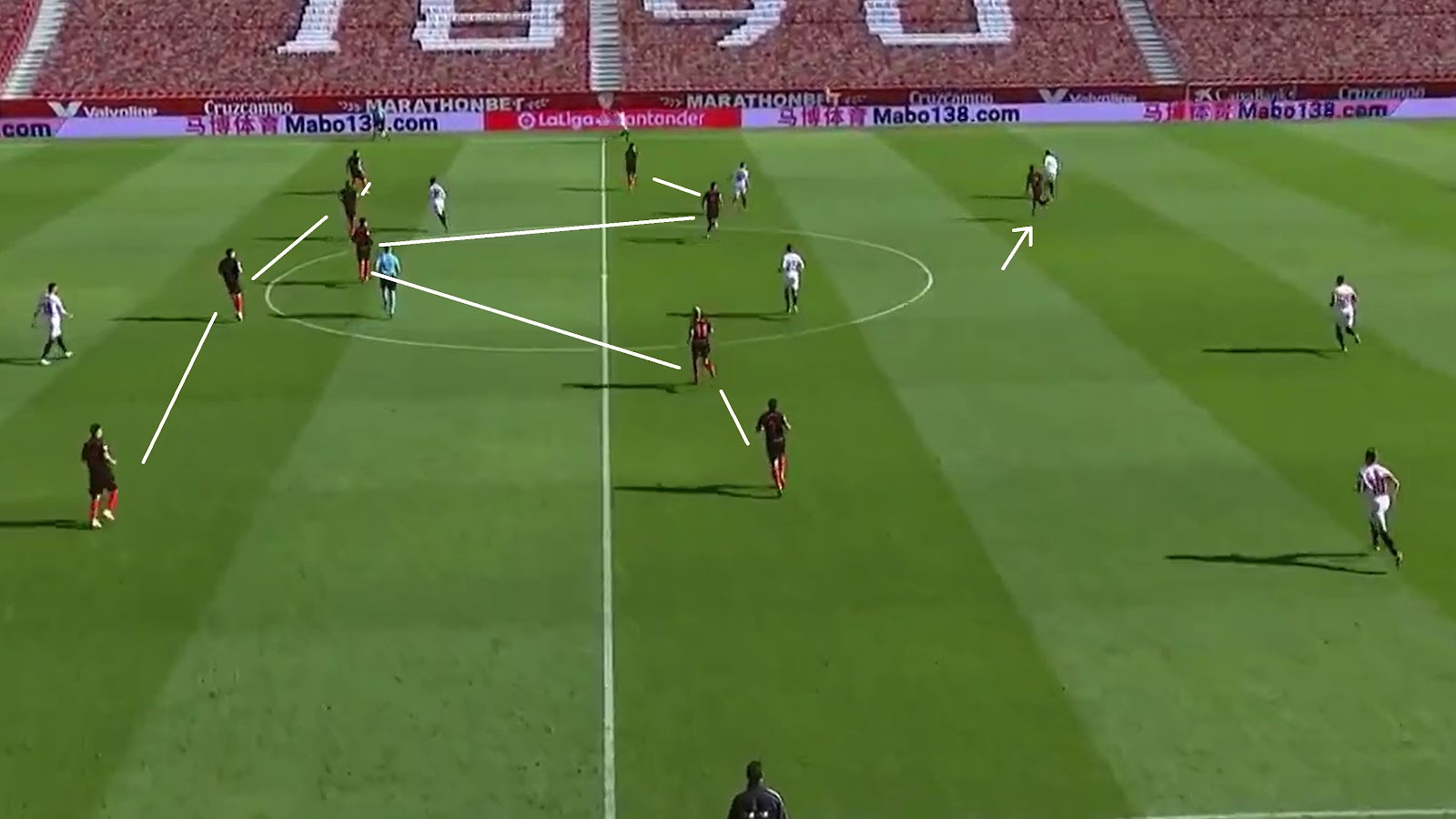 All of these stats underline how difficult it may be for United to break down their hosts on Thursday night. Patient build-up play isn't one of their strengths, so in this match they will need to take full advantage of any moments of disorganisation to create scoring chances.

HOW THE STYLES MAY CLASH

Offensively, Sociedad can be quite an expansive team. Oyarzabal likes to drift infield and their full-backs get forward to provide width. This puts a lot of responsibility on the defensive midfielders to protect the centre-backs in transition.

There will be gaps for Manchester United to exploit. Space on the flanks or in behind is something Martial and Marcus Rashford can exploit through their runs and speed, while Bruno Fernandes will no doubt be keen to capitalise on any opportunities through the middle.

Playing through Sociedad's intense man-to-man pressure will not be easy for a United side lacking players with quick thinking and footwork in defensive midfield or at centre-back. Harry Maguire is particularly culpable of being too slow to react under pressure, while without Pogba they don't have a playmaker to take the ball, turn his man, and single-handedly open up the game.

As a consequence, quick transitions will be vital to United's chances of success. When they regain possession, they will almost certainly look to find Fernandes, Rashford or Martial within one or two passes. From there they will hope their playmaker and quick strikers can take advantage of space on the outside or behind Sociedad's high defensive line.

Manchester United have plenty of attacking firepower. The problem is getting those dangerous forward players on the ball. Against low blocks this is something Solskjaer's side struggle with, but in an open game against a more aggressive opponent like Real Sociedad they may find it easier.