After five consecutive defeats saw Aston Villa sink to 16th in the Premier League table, they decided on a change of manager. Dean Smith was sacked, and Liverpool legend Steven Gerrard brought in as his replacement.

Gerrard arrives at Villa Park with three-and-a-half years of managerial experience under his belt already, which included leading Rangers to their first Scottish Premiership title in a decade. Here we at Tribal Football will break down his tactics and managerial style, before looking into players he might sign in January to kick-start his Aston Villa revolution.

Gerrard's first priority at Rangers was making the team harder to beat. He built his side on solid foundations, bringing greater defensive organisation and more intense pressing. He was said to have driven up standards and fitness levels, both of which underpinned the focus on defence. In his first season at Ibrox, Rangers' average shots against went down by two per 90 minutes, while their goals conceded per 90 decreased from 1.32 to 0.71.

In European football, Rangers were almost instantly transformed. Previously unable to beat teams from Luxembourg, Gerrard led them to draws with Villarreal, Spartak Moscow, and a win over Rapid Wien. While the Scottish side couldn't get out of their Europa League group that year, they were able to get results in four of their six games.

Tactically, Gerrard is set on a back four. He experimented with a back three just once in his entire time at Rangers, in a 3-3 draw with Motherwell. In terms of defensive formation, he initially went with a simple 4-5-1 or 4-2-3-1, with one or two midfielders supporting the lone striker in pressing. Then, at the end of his debut campaign in Scotland, he went for a 4-3-3 with a narrow front three that blocked passes through midfield and forced opponents wide. The narrow 4-3-3 (shown below) worked well for the most part, though it wasn't without issues, such as quick switches to expose the full-backs. 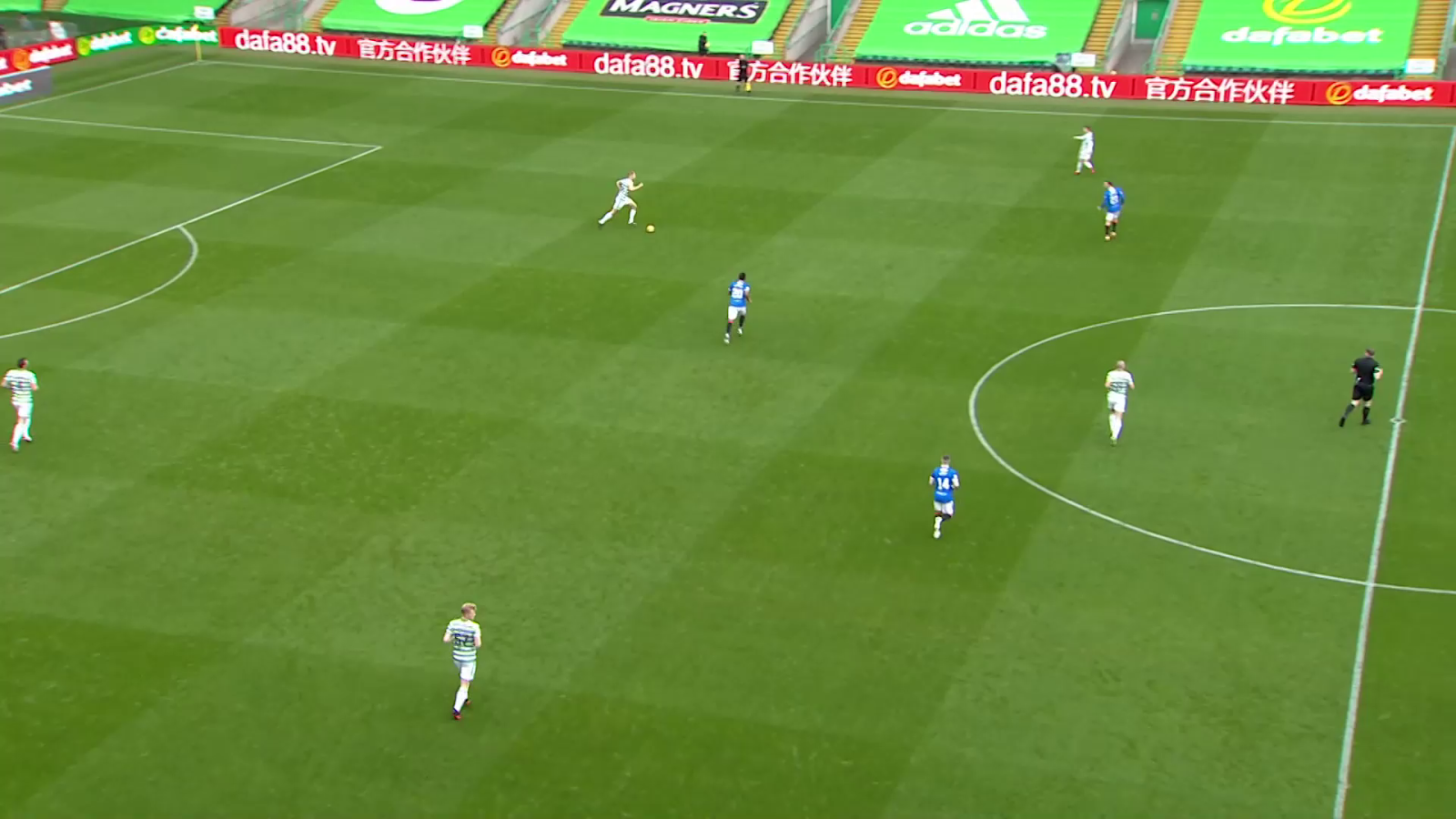 Last season, Aston Villa were defensively in the ballpark of a top-six team. This season, however, they are keeping fewer clean sheets and conceding more goals. In order to get the team back into form and pushing for a top-half finish, this will be the first area where Gerrard targets improvement.

One of the major developments during Gerrard's three full seasons at Rangers was the improvement in the team's attacking play. Initially, he made the team more effective offensively using simple rotations out wide between the full-backs, wingers and attacking midfielders. However, by his title-winning season, where Rangers went unbeaten in league action, the play was far more fluid, with the narrow front three interchanging and combining.

The introduction of the narrow 4-3-3 system played a part, but another key influence here was simply the recruitment of better quality and depth of attacking options. Previously reliant on the goals of Alfredo Morelos and Jermain Defoe, Rangers could now call upon Ryan Kent, Ianis Hagi, Joe Aribo and Kemar Roofe to find the net.

There were some recurring attacking themes throughout Gerrard's first managerial tenure. One was that he liked his full-backs to overlap and provide quality service into the penalty box from wide. 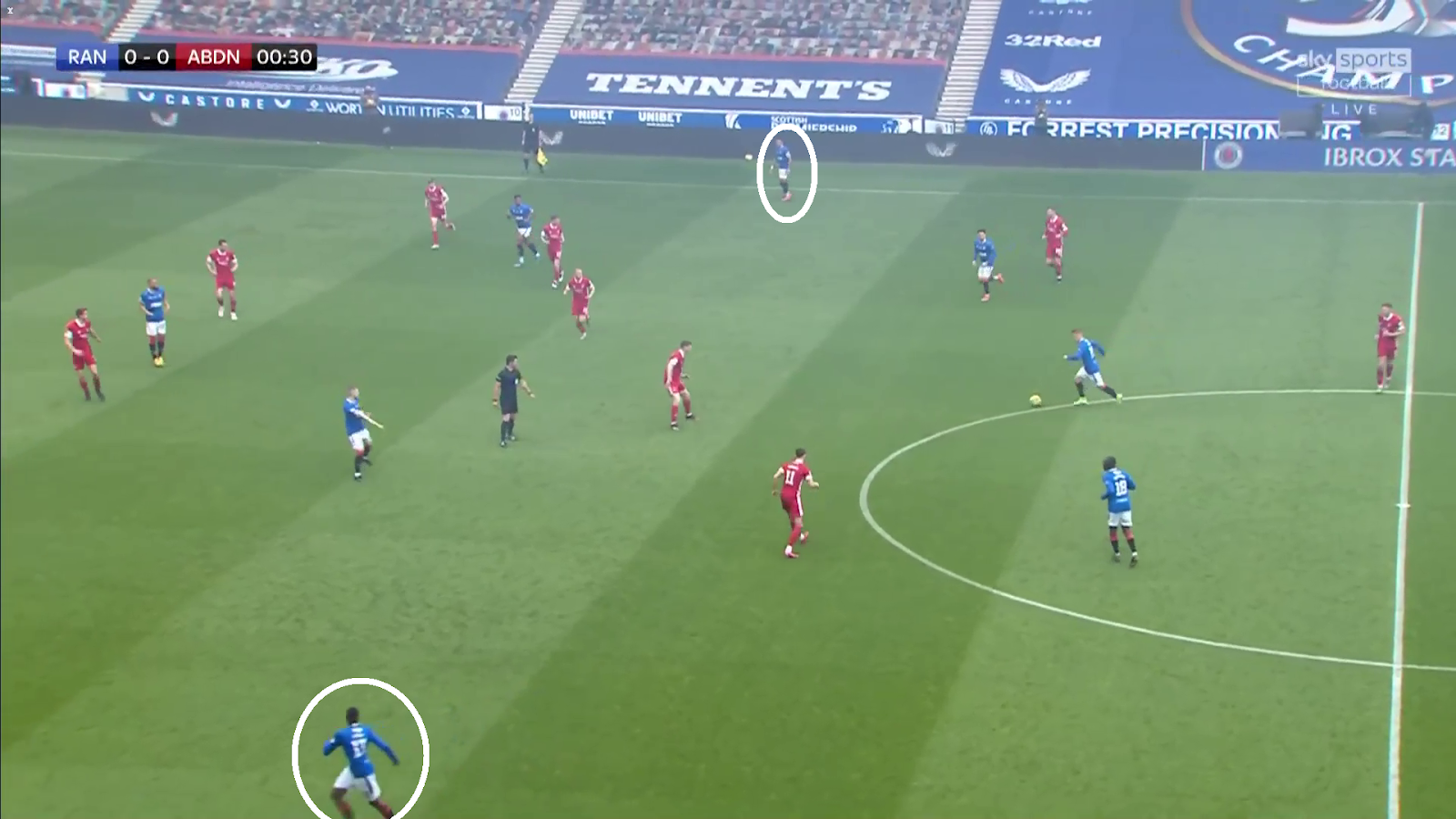 Another was that he wanted his centre-backs to mix up their passing game, with Connor Goldson throwing in the occasional long diagonal over the top for Kent to run onto. Also, Gerrard's midfield three almost always contained one holding midfielder, one who connected defence and attack, and one more attack-minded player who could make dangerous runs off the striker (Scott Arfield) or score goals from the edge of the box (Aribo, Hagi).

MANAGERIAL STYLE, AND PROBLEMS WITH THE LOW BLOCK

Before Gerrard arrived at Rangers, they simply weren't competing for the Scottish title. That they won it, and won it in style, is a testament to his ability to handle pressure. Over three years he gradually built the club back up, first competing with Celtic in derbies, then competing in Europe, and eventually winning the league.

Gerrard's man-management seemed to get the best out of the players. He showed similarities to some of the best managers in that he didn't fold under intense scrutiny, and he was also willing to bring in people with more experience or coaching expertise, like Michael Beale and Gary McAllister, to help him succeed. However, for all his tactical and managerial acumen, there were some roadblocks.

He focused too much on not losing at times, sacrificing goal threat for control of possession. There were consistent difficulties in breaking down low defensive blocks. He was also unable to win a single cup competition in six attempts, with losses to lower-budget teams like Aberdeen, Hearts, St Johnstone and St Mirren suggesting he can be out-thought in one-off games. Furthermore, in both of his first two seasons in charge, Rangers' title tilts inexplicably collapsed after the winter break.

Gerrard's time at Rangers was, in general, a huge success. He can point to the unbeaten league title and his European results as two areas of significant improvement under his leadership. But there were some problems along the way, so a quick fix at Aston Villa is not a given.

This version of Aston Villa does not present a bigger rebuilding job than Rangers in 2018, so Gerrard now has a stronger base to build upon. He also inherits a team that plays primarily with some version of a 4-3-3 system, so there won't be too many major changes in terms of defensive shape. He will likely try to improve the organisation and cut out basic errors, and may perhaps attempt to increase the intensity of the team's pressing.

The profile of Aston Villa's midfielders should suit Gerrard, too. Douglas Luiz can act as the deep playmaker, holding position and dictating the tempo. Jacob Ramsey can act the connecting midfielder, with quick feet and a high work rate. John McGinn could be Gerrard's more attacking midfielder, providing runs and shooting from outside the box.

It's unclear how Gerrard will deploy the vast array of talented attackers at his disposal. Emi Buendia may be moved into the midfield, but could also play as a roaming No.10. Ollie Watkins and Danny Ings offer completely different types of striker profile, while Leon Bailey, Anwar El Ghazi and Bertrand Traore provide skill and speed on the wings.

Gerrard already has a lot of quality to work with, but he may go back to Rangers in January to strengthen his squad further. Glen Kamara was one of his favourite players - the Finnish midfielder was almost undroppable thanks to his ball control and quick footwork. Further forward, Gerrard may consider a move for Ryan Kent to add explosiveness and creativity to his new attack. For Aston Villa, the aim must be to finish inside the Premier League's top half. On paper that sounds straightforward, but in reality it isn't. Gerrard may no longer have the pressure of winning trophies, but he does need to adjust to a much stronger league with greater depth and no easy games. It may take time for him to make that adjustment, but he has already proven he can manage well at a high level.