Manchester United finished last season as the Premier League's 'best of the rest'. Liverpool ran away with the title and Manchester City got second spot, but Ole Gunnar Solskjaer's side enjoyed a positive end to the campaign to seal third place ahead of Chelsea and Leicester City. Their challenge now is to bridge the gap to the top two, and Donny van de Beek's arrival could aid them in this quest.

The Dutchman signed in early September for a reported fee of £35 million. At just 23 years old, he has been part of a title-winning team with Ajax, who he also helped to the Champions League semi-finals, and is a Netherlands international. In this article, we at Tribal Football analyse how he will fit in at Manchester United alongside Paul Pogba and Bruno Fernandes.

WHAT DOES VAN DE BEEK BRING TO MANCHESTER UNITED?

During his time at Ajax, Van de Beek often played as part of a double pivot or as a No.8 in a midfield three. However, during their run to the 2019 Champions League semi-finals, he acted as a No.10 behind Dusan Tadic. This versatility is the most obvious quality he brings to Old Trafford.

Van de Beek's ability to play multiple different roles is no doubt related to his spatial awareness. He is constantly able to find pockets, create passing angles for teammates, and support attacks. He may not have the same quality on-ball of Pogba or Fernandes, but he does enhance his team's possession through off the ball actions.

Manchester United fans got a glimpse of this in his debut friendly against Aston Villa. While he lined up as part of a central two with Scott McTominay, he was always on the move. A great example of this is seen in the below sequence.

Here, Marcus Rashford has the ball on the left wing. Van de Beek is circled. Seeing that Rashford already has support inside him from Luke Shaw, he realises he doesn't need to be there and moves forward to take up a different position. 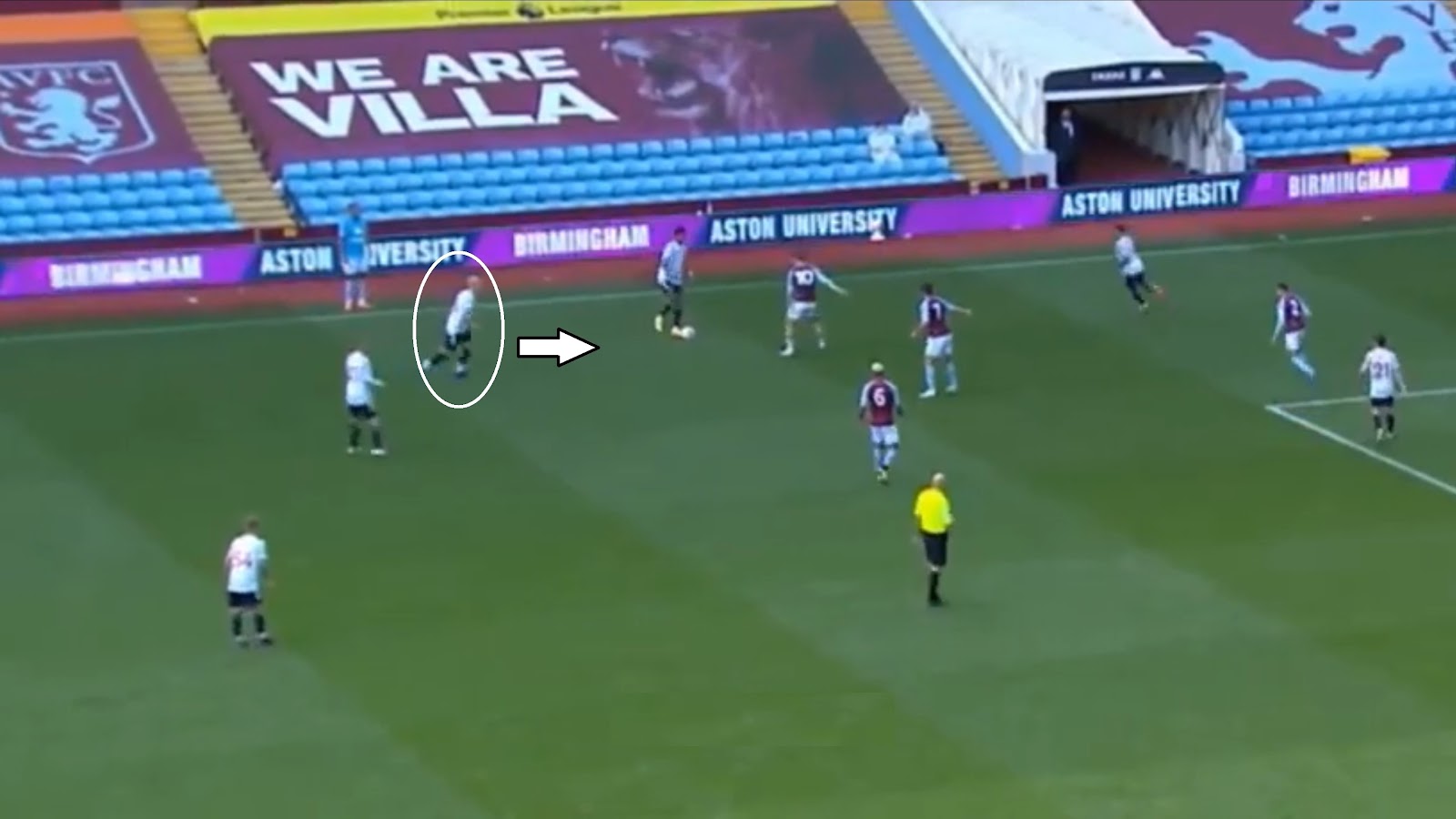 When Rashford passes back to Shaw, Van de Beek is now in a position between Aston Villa's defensive lines. He shows for the ball to feet and Shaw finds him with a simple pass in the channel between Villa midfielders, breaking a line of defence in the process. 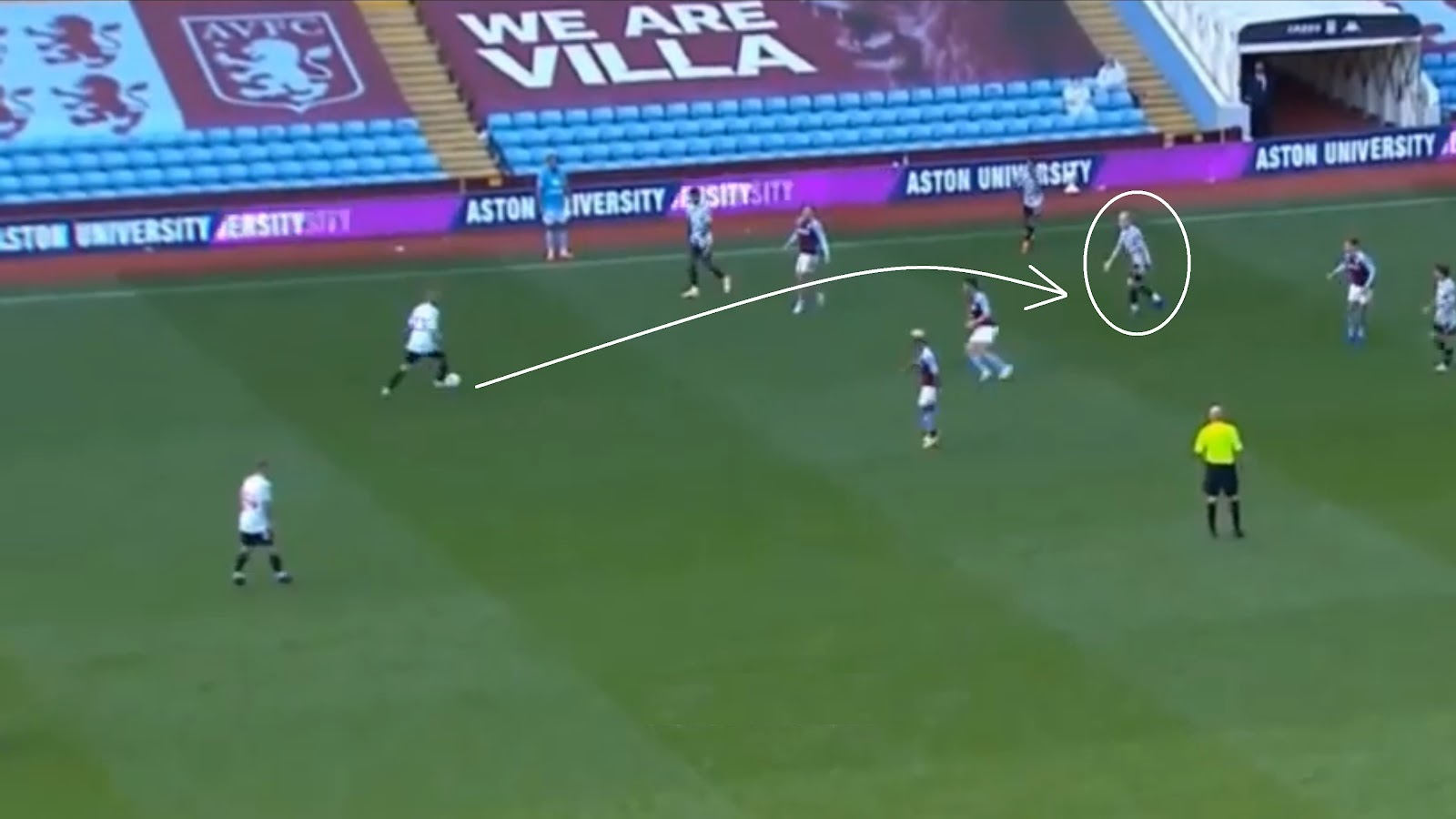 Van de Beek brings this same awareness to build-up play. Although he preferred to keep it simple against Aston Villa, primarily exchanging passes with the centre-backs, he did sometimes try to combine with McTominay.

Below we see Van de Beek trying to one-two his way out of pressure in a deep area. He checks his shoulder and sees an opponent closing him down, so lays the ball off to McTominay. But rather than stay still, he moves forward on the blind side of the opponent to offer for the one-two. McTominay doesn't see the option, but it was a nice idea and another example of how Van de Beek's movement can help Manchester United build possession. 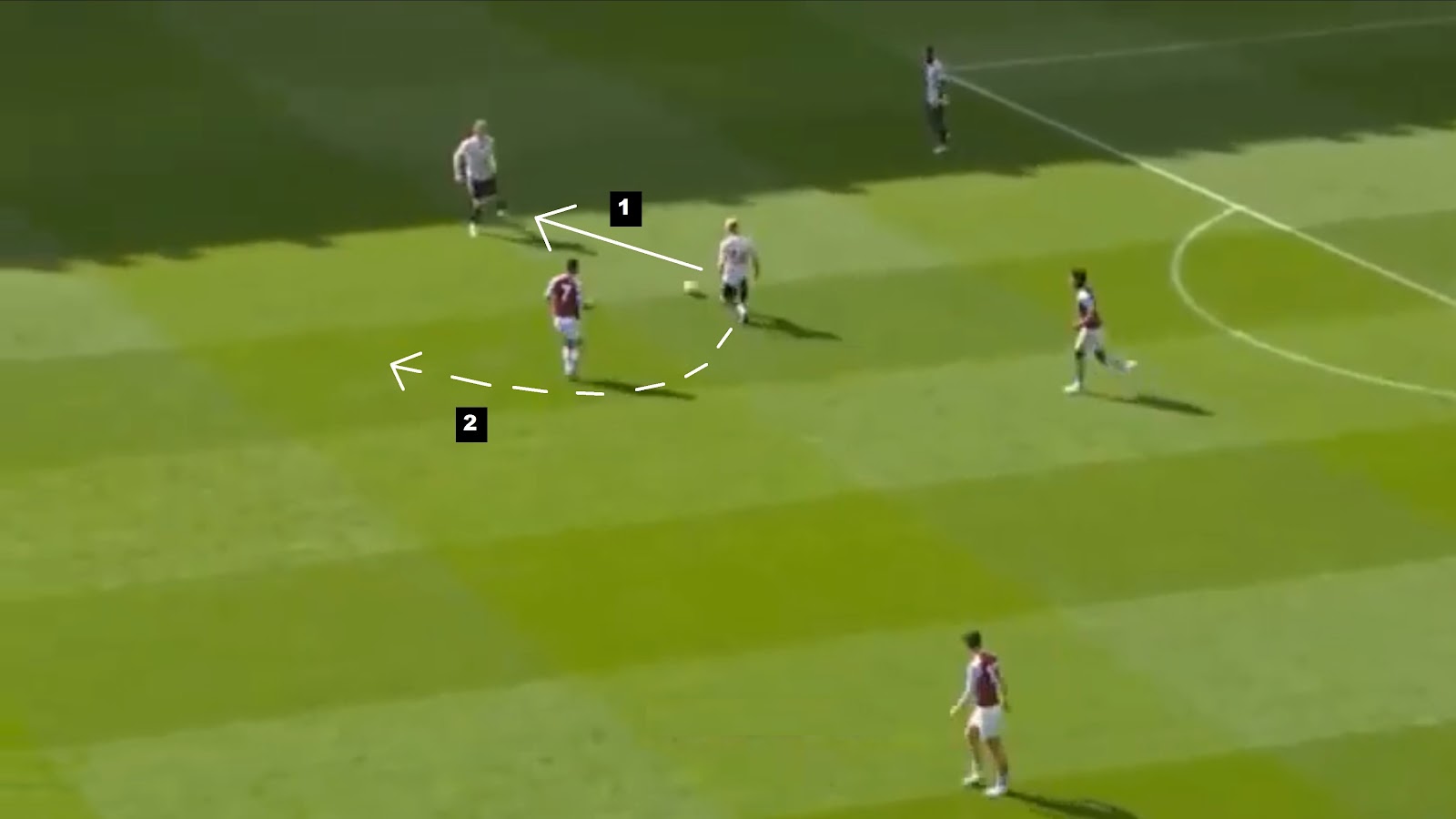 Even while playing as part of a double pivot against Aston Villa, the 23-year-old showed his desire to get forward and support the attack with runs from midfield. On multiple occasions he got into advanced areas either to attack space or to pick up the second ball after direct play to one of the forwards. From these situations he was able to set up crossing and shooting opportunities.

In the lead-up to the example below he saw space in Villa's back line, ran into it, then motioned to receive the ball. When the pass reaches him, he is in a position to whip a low cross into the heart of the penalty box for a teammate to attack. 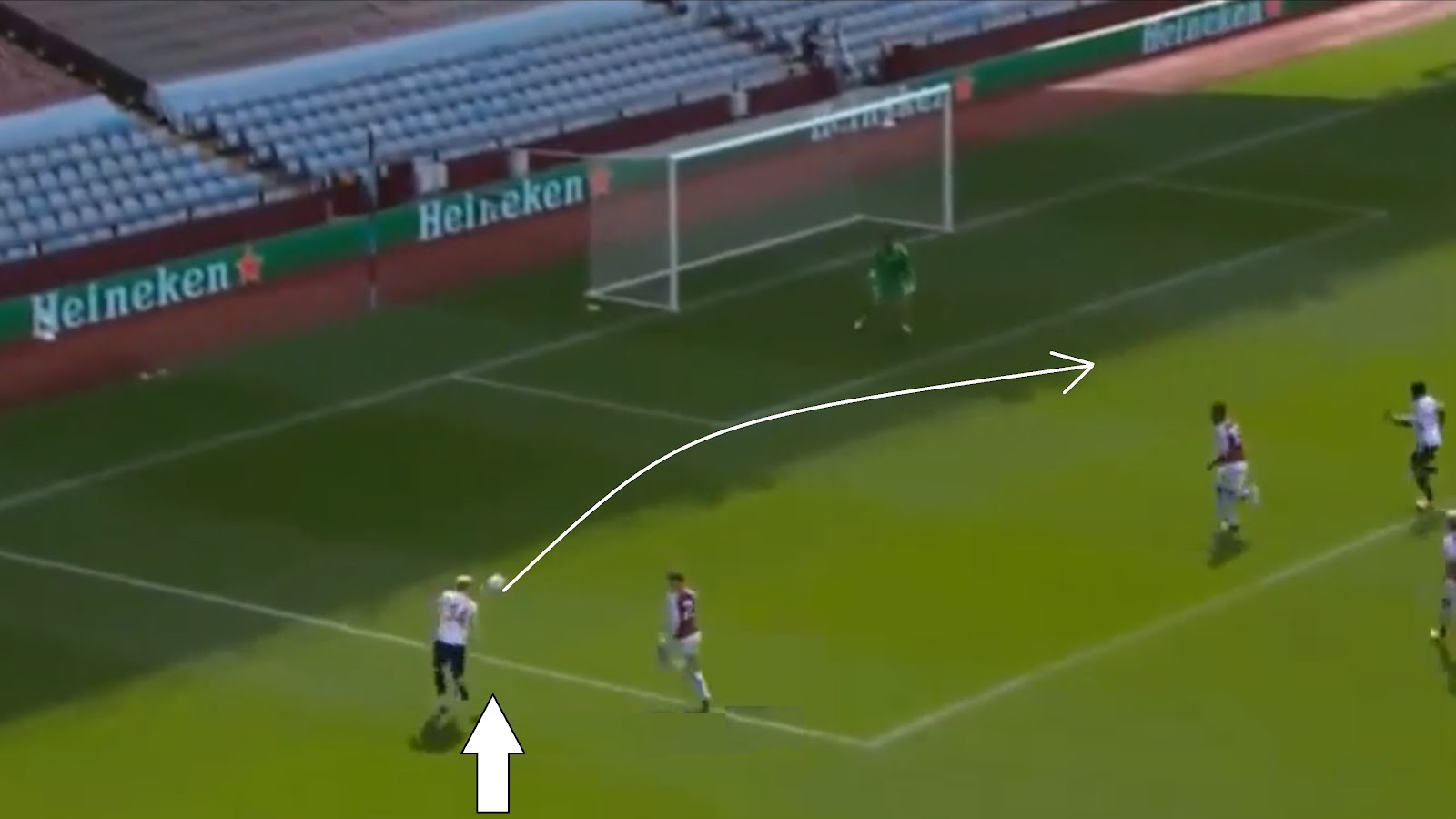 Most of Van de Beek's best offensive skills are mental and tactical. But he does have ability on the ball too, even if not in possession of the variety of Pogba or the incision of Fernandes. Against Aston Villa he played a number of accurate diagonal balls out to the wingers, and he showed a wonderful piece of skill to pirouette beyond two opponents.

He also demonstrated his defensive traits – a good engine, decent physicality, as well as willingness to apply pressure and get stuck in when necessary. Below he sees the opponent about to receive the ball on the edge of Manchester United's penalty box and goes to close him down. 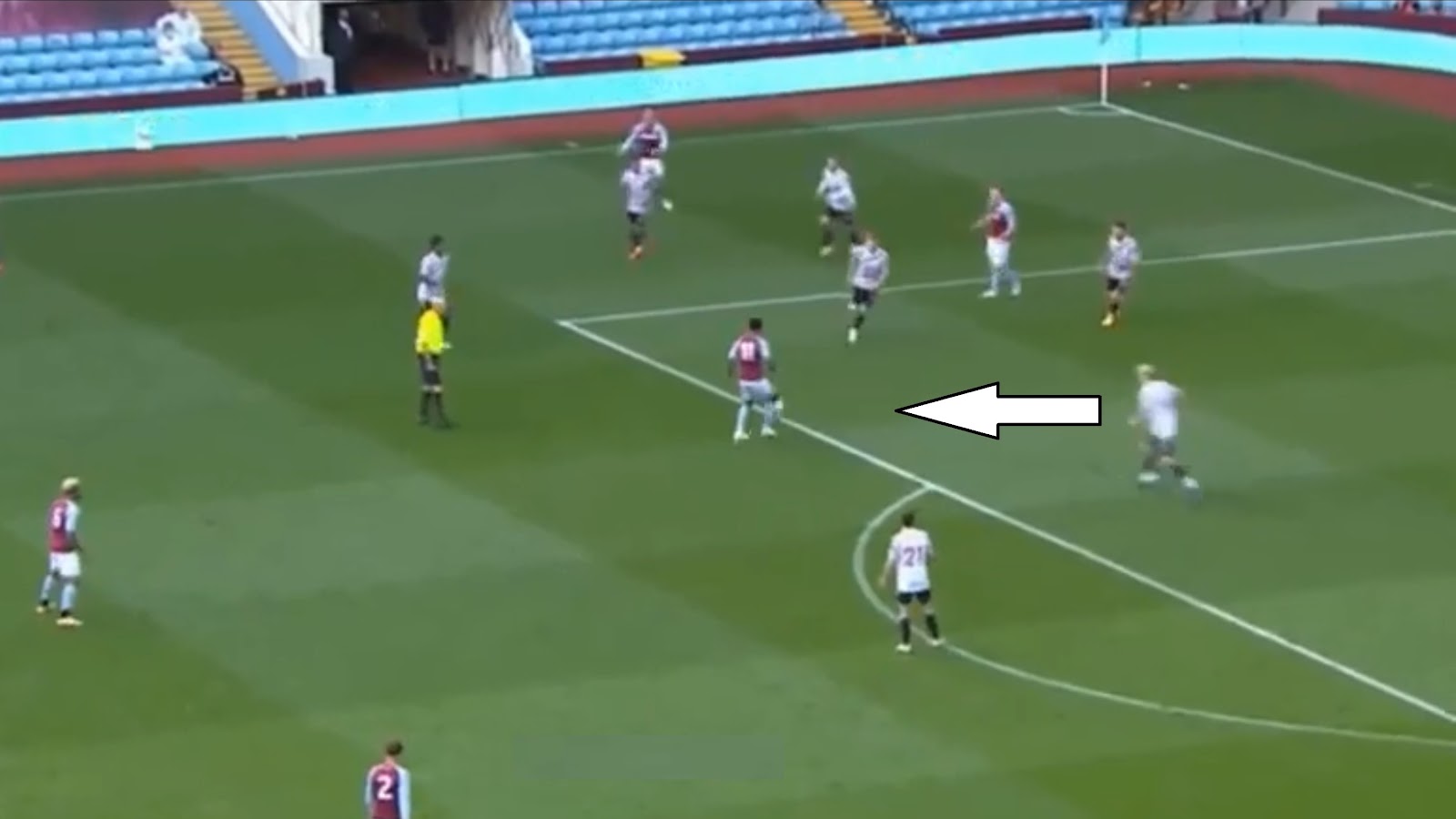 This pressure stops the opponent from having a clear view of goal and also takes his time away. The opponent turns and faces backwards, and Van de Beek tackles him. 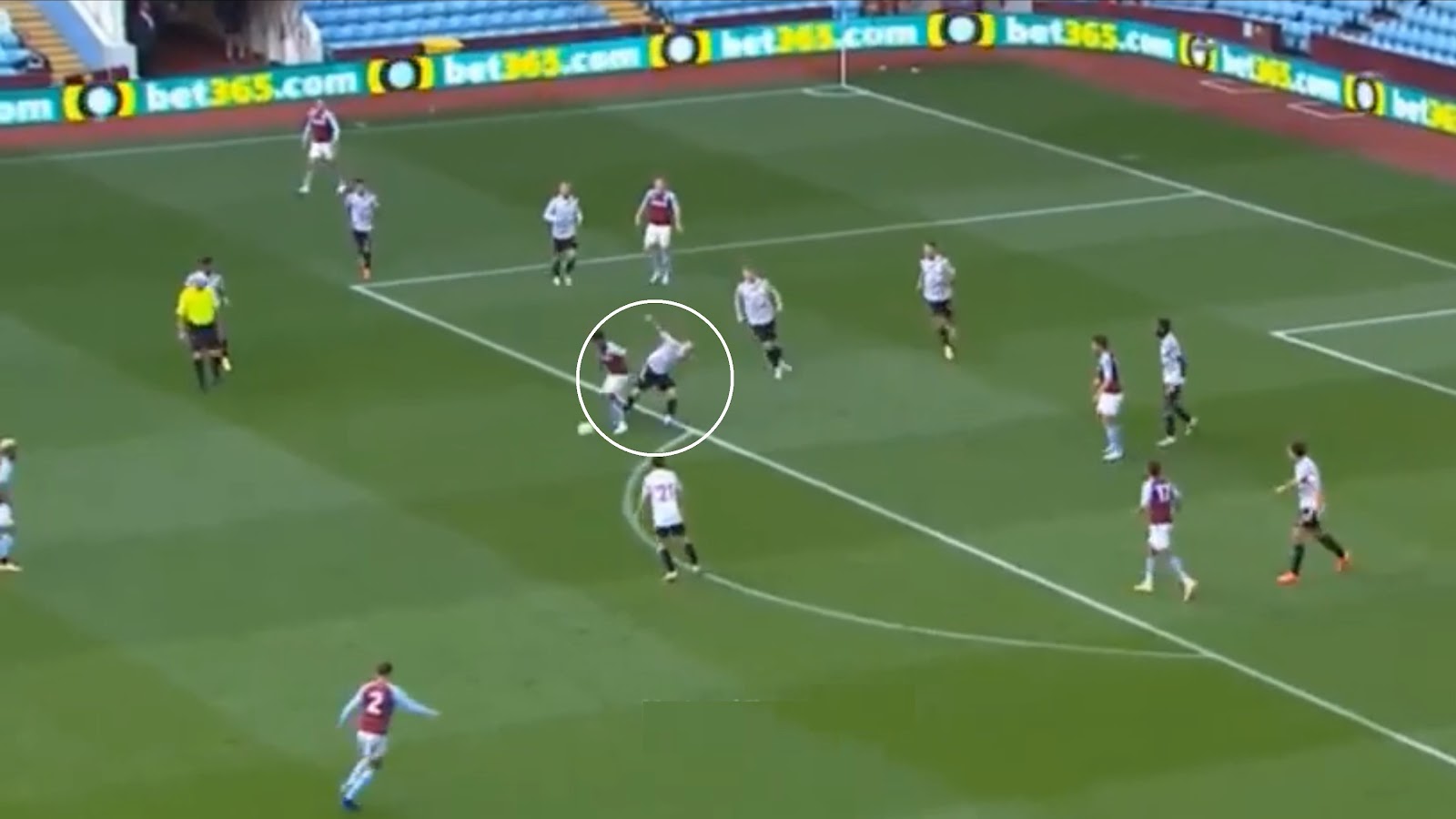 HOW WILL VAN DE BEEK FIT IN?

Manchester United now have one of the most well stocked midfields in Europe, with Van de Beek joining Pogba and Fernandes in the squad. However, while all three are fundamentally 'attack-minded', they are unique in the characteristics they each bring to the team.

Pogba is a No.8 who can also function as a playmaking No.6 when there is solid defensive coverage alongside him in the form of, say, Nemanja Matic (or, at international level, N'Golo Kante). He is one of the finest passers in English football, with fantastic vision, range and variety meaning he can find gaps just as easily with a cutting through ball as he can with a long switch to the opposite flank.

He is also undoubtedly the best dribbler in United's midfield, combining control with a sizeable frame to keep opponents at bay, and he likes to get forward occasionally to shoot from distance. Solskjaer has most recently deployed him as one half of the double pivot, where he can get on the ball in deeper positions and dictate the team's attacking play.

Fernandes, on the other hand, tends to operate in a more advanced role for Manchester United. The Portuguese is a natural No.10 or an attacking No.8 boasting a decent short burst of speed to get away from tight situations and a precise through ball, both of which play into him being extremely dangerous in transitions.

He can turn defence into attack in an instant, feeding the quicker, more skilful forwards in front of him, such as Rashford, Anthony Martial or Mason Greenwood. He's also a good source of goals himself with late runs into the box and astute penalty taking. However, he doesn't have the physicality to handle aggressive pressure in congested midfields the way a Premier League No.8 often must, hence why he is deployed behind the striker in Solskjaer's preferred 4-2-3-1.

Van de Beek is more versatile than Pogba and Fernandes, in that he can play effectively as a No.6, No.8 or a No.10. He's unquestionably more physical and dynamic than Fernandes, and his movement is arguably better than Pogba's. However, he isn't as good a passer – Pogba is more capable of opening up the game, while Fernandes is more penetrative in the final third. Ultimately, he is more a 'connector' than someone who kick-starts moves single-handedly.

Below we see a statistical comparison of the three, focusing on key metrics for attack-minded midfielders, based on data from last season as per WhoScored.com.

The data shows that Van de Beek shoots more often than Pogba, and converts significantly more of those shots into goals. That's probably something to do with getting closer to goal more regularly, but it may also reflect the quality of his decision-making and the accuracy of his shooting. He's also in a similar bracket to Pogba and Fernandes when it comes to chance creation, though he passes significantly less often and dribbles less too. This is balanced out by a greater volume of tackles.

These numbers must be taken in the context of Van de Beek playing for Ajax in the Dutch Eredivisie, while Pogba and Fernandes' numbers come from their game time for United in the Premier League. However, there are hints to the Dutchman being a threat in the final third and a reasonable chance creator with a strong defensive game.

It's unclear exactly how Solskjaer will deploy his new signing. It will be difficult for the Manchester United manager to get Van de Beek into a 4-2-3-1 also featuring Pogba and Fernandes without losing balance. At least one positional or defensive midfielder is needed, such as Matic, to ensure United aren't constantly caught in transitions with all three midfielders up the pitch.

It may be a possibility that Solskjaer experiments with a double pivot of Van de Beek and Pogba together, especially against weaker domestic opponents. One of United's issues in build-up recently has been that, when Matic drops into the back line, Pogba becomes isolated in midfield and the back line finds it hard to connect with the frontmen. Van de Beek's dynamism and movement would probably improve things here, but again the risk is he and Pogba both like to push on.

The key question there will be: can they form a workable partnership? If they can get it right regarding who goes and who stays, and alternate responsibilities effectively, it could be a goer. If not, Solskjaer may need to explore other formations, such as a diamond midfield, to get Van de Beek into the same line-up as Pogba and Fernandes.

No matter what happens, Manchester United have upgraded their midfield options by signing Van de Beek. Whether he starts or rotates in to refresh things or cover for injuries, his addition bolsters the club's hopes of improving on third place.