Tactical breakdown: How Newcastle could surprise Arsenal in FA Cup

Mikel Arteta has come under intense scrutiny this season after his Arsenal side made a stuttering start to their Premier League campaign. After 17 games, the Gunners have just seven wins to their name, not to mention eight defeats. However, on Saturday they will look to continue a mini-resurgence in form in their favourite competition.

Having won the FA Cup last season, Arsenal will be hoping to hold onto their title. To do that, they must first get past Newcastle United, a side that lie just four points behind them in the league table. Steve Bruce's men can provide tough proposition to break down, as Liverpool found out recently in a 0-0 draw at St James' Park.

Here we will preview the cup tie, looking at how each team may set up, as well as their strengths and weaknesses.

After going seven Premier League matches without a win, Arteta instituted some tactical changes at Arsenal for their clash with Chelsea in December. Out went the 3-4-3 formation, in came a more conventional 4-2-3-1, as well as several personnel changes.

Beating Chelsea 3-1, Arteta stuck by the system, only making a few rotations for wins over Brighton and West Brom. Dani Ceballos and Mohamed Elneny alternated in midfield next to Granit Xhaka, while Aubameyang was re-introduced up front or on the left wing.

There may be more changes for this weekend's game as Arteta tries to freshen up his team and keep his squad happy, so Ainsley Maitland-Niles, Joe Willock, Nicolas Pepe and Eddie Nketiah are all possibilities to start at full-back, attacking midfield and up front respectively. 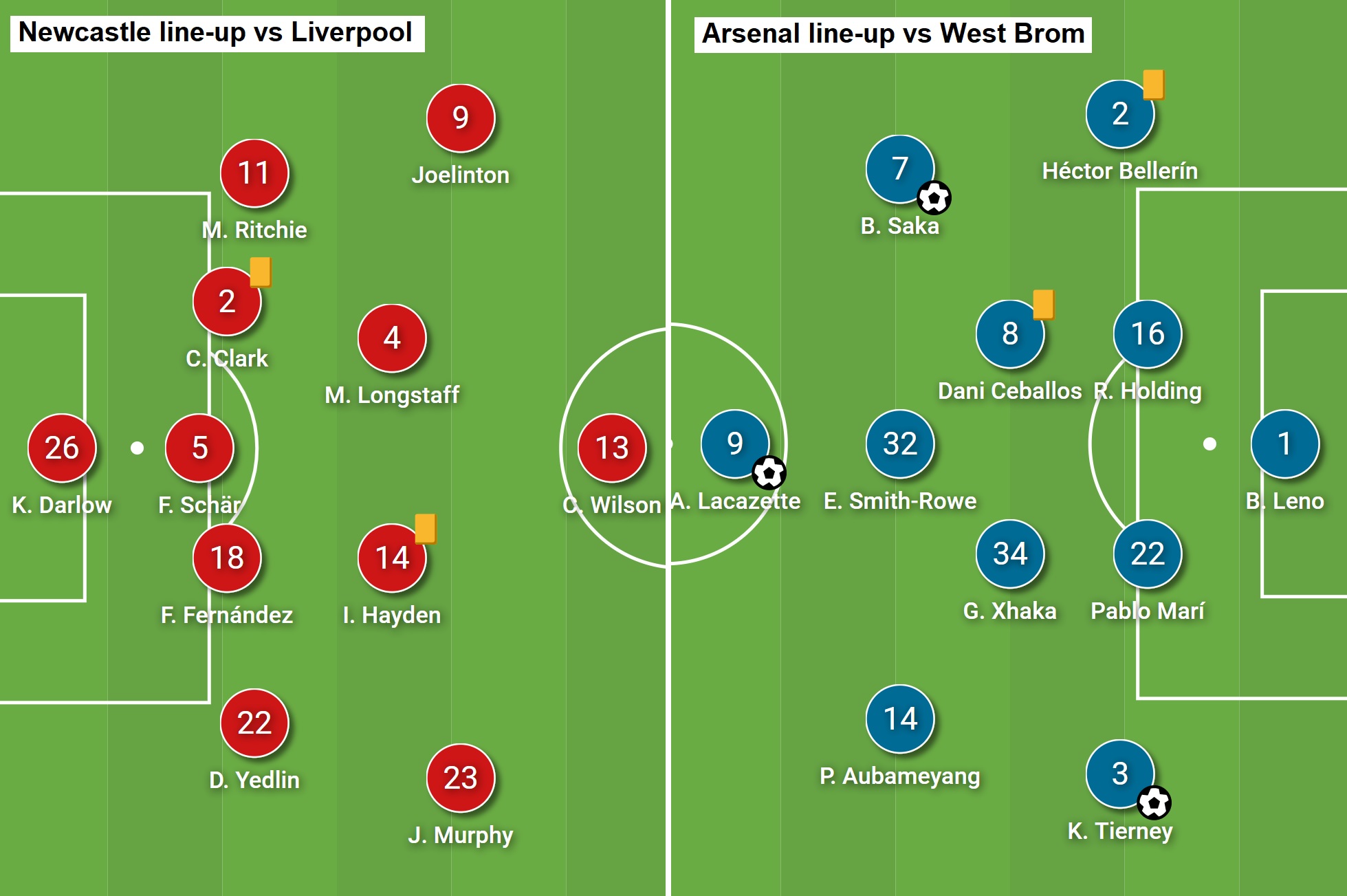 Steve Bruce has mixed and matched his approach this season depending on the opponent. However, he usually goes with a 5-4-1 against top-tier opposition and is likely to do so again here, perhaps feeling the extra centre-back gives him more security against quality attackers.

Karl Darlow has been a formidable last line of defence for Newcastle, though Martin Dubravka could get an opportunity to play on Saturday. The back three of Federico Fernandez, Fabian Schar and Ciaran Clark may stay the same, though Jonjo Shelvey and Isaac Hayden could return in front of them.

Up front, Bruce will likely start with Callum Wilson, without doubt his most threatening and consistent forward. Joelinton brings decent link play and physicality alongside him, while on the other flank the pacey Miguel Almiron may be favoured over Jacob Murphy.

The biggest positive to come out of Arsenal's formation change is the return to left-back for Kieran Tierney. A quick and attack-minded full-back, he had previously been deployed as an outside back in the defensive three. Now, however, he has license to fly down the left-hand side, make overlapping runs, combine with the left winger, and whip in dangerous crosses.

Tierney's attacking threat has been clear in recent games. He effectively set up Arsenal's opener against Chelsea after turning Reece James inside out to win a penalty. He then scored a goal against West Brom after cutting in onto his right foot, before setting up the fourth goal in a 4-0 win with a driven cross for Alexandre Lacazette to tap in from close range.

While Tierney's runs, dribbling and crossing provide threat on the left, Bukayo Saka will present Newcastle with similar problems on the right. Naturally left-footed, he likes to come in and take on his man before playing crosses to the far-post area for the likes of Aubameyang to run onto – as seen in the below image. Alternatively, he can fake to go inside and cut back onto his right foot, go around the outside and cross or shoot. 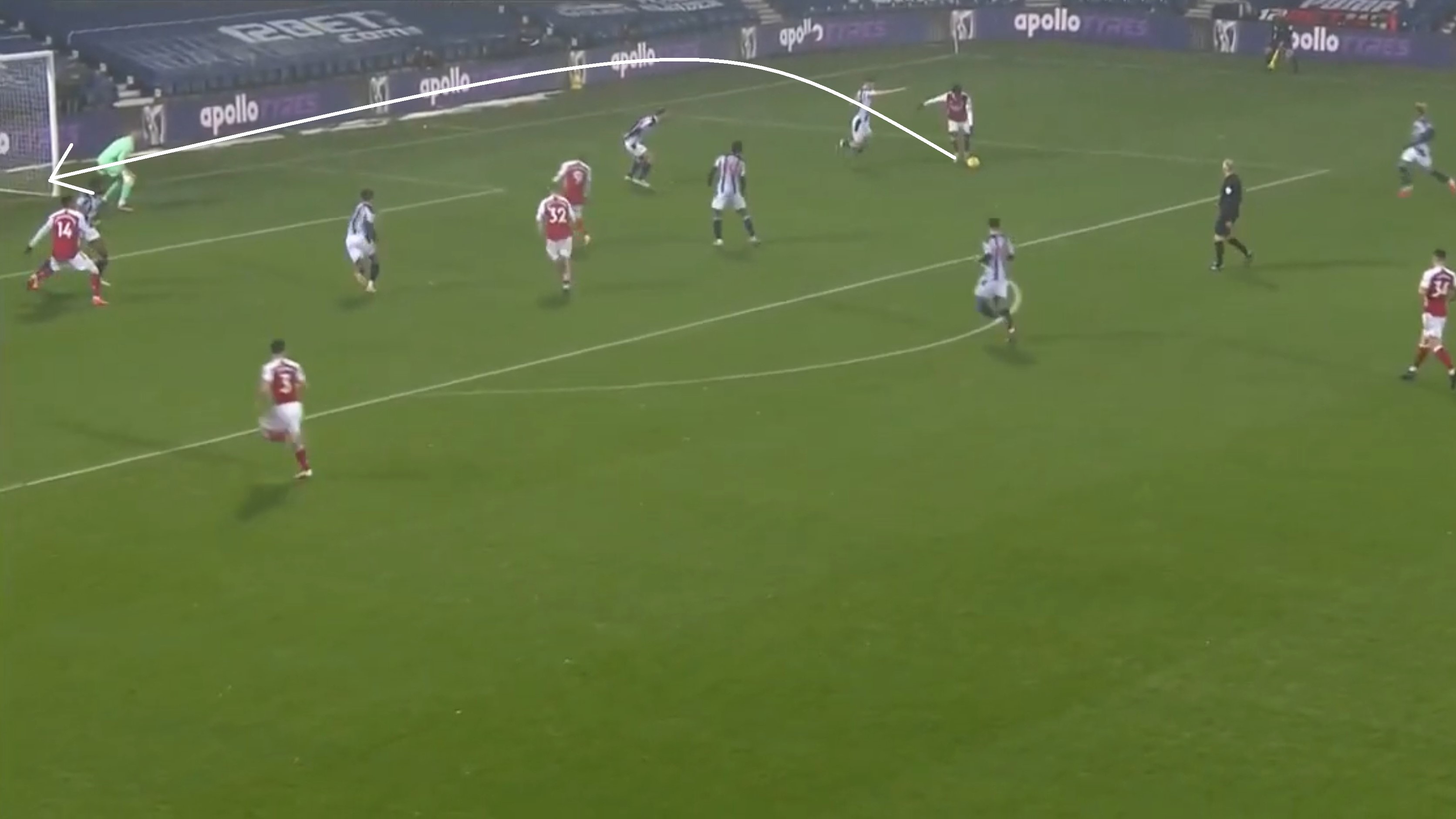 Newcastle may go for the 5-4-1 this Saturday, but more numbers in the back line doesn't equal more organisation. In fact, big gaps can open up between their central defenders that Arsenal could test with Tierney and Saka's crossing. The Magpies can also be opened up in transition, due to a lack of pace and positional sense in their midfield two, so Arteta may want his side to play quickly through the lines in these moments and release fast attackers like Aubameyang and Saka into space.

Arsenal's final third game has improved since the switch to 4-2-3-1. With Lacazette coming short to link play, Saka coming inside and Smith Rowe moving laterally between the lines, there is more movement and combination play. However, Arteta's men are still susceptible when trying to build out from the back.

High pressing goes against Newcastle's usual approach – according to Understat they have the highest PPDA (number of passes they allow to be made by the opposition in their own half) in the Premier League. But considering Arsenal are playing a new formation, have centre-backs of limited passing ability and base midfielders that can give up possession under pressure, Bruce may look to have Wilson and his attacking partners rush their opponents at times.

Given Newcastle are virtually guaranteed to have a much smaller share of possession in this game, their main threat will come on counter-attacks and set plays. Wilson's clever runs (seen below against Liverpool) will give them a great out-ball for direct counters, particularly if he can get outside of Rob Holding and go at the Arsenal man one-versus-one where his pace will cause problems. 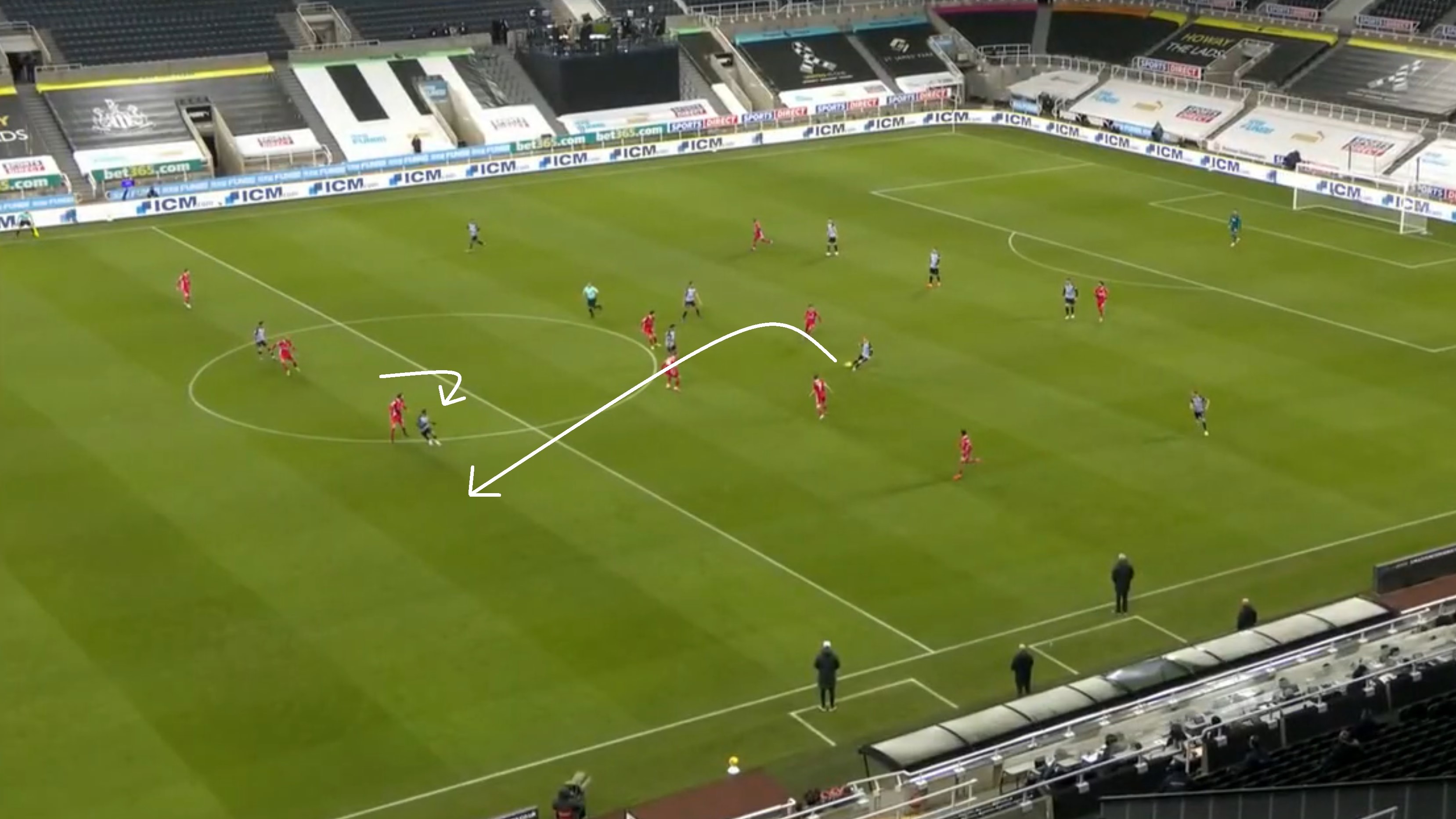 The Gunners are still adjusting to the four-man back line and the likes of Ceballos and Xhaka aren't great at tracking runners, so gaps should open up for Newcastle to exploit.

Another route to goal could be corner kicks, where Arsenal have conceded a number of chances against Brighton and West Brom. Newcastle may not have the same aerial threat that those two sides have from dead ball situations, but it's nonetheless an area of weakness Bruce will want his side to take advantage of if they are to have any chance of winning this cup tie.