Leicester City are unbeaten in the Premier League since 16 December. After a defeat to Everton, Brendan Rodgers' side have won four and drawn two of six games. Along the way they have beaten Tottenham Hotspur, Chelsea and Southampton, and picked up a solid point against league-leading Manchester United.

Currently third in the table, Leicester are on course to improve on their performance last season. And in a campaign where the winners are likely to attain only around 80 points, this makes them outside challengers for the title. Here, we at Tribal Football examine how they play and whether they are serious contenders.

While they are perhaps less focused on dominating the ball as they were last season, Leicester remain a 'possession-based' side. They mix building out from the back with more direct counter-attacking play built around the pace and movement of Jamie Vardy. This is the Rodgers way, and he has the players he needs to do the job.

One of the subtle changes this season has been Youri Tielemans' use at base midfield alongside Nampalys Mendy or Wilfried Ndidi. Leicester can struggle to get their base midfielders on the ball at times, particularly against organised 4-4-2 opponents who have their strikers block passes into midfield (think Southampton), but when they can get him on the ball Tielemans is responsible for moving things forward, spreading play to the wings or finding James Maddison through the lines.

Maddison is the team's link man, operating behind Vardy up front. He's averaging around 1.9 key passes per match – more than any of his teammates according to WhoScored.com – and his movement is excellent. While the opponent is attracted to Tielemans or his midfield partner, Maddison will move on the blind side to make an angle for the through ball. From there, he can turn and drive at the last line while Vardy makes runs in behind. 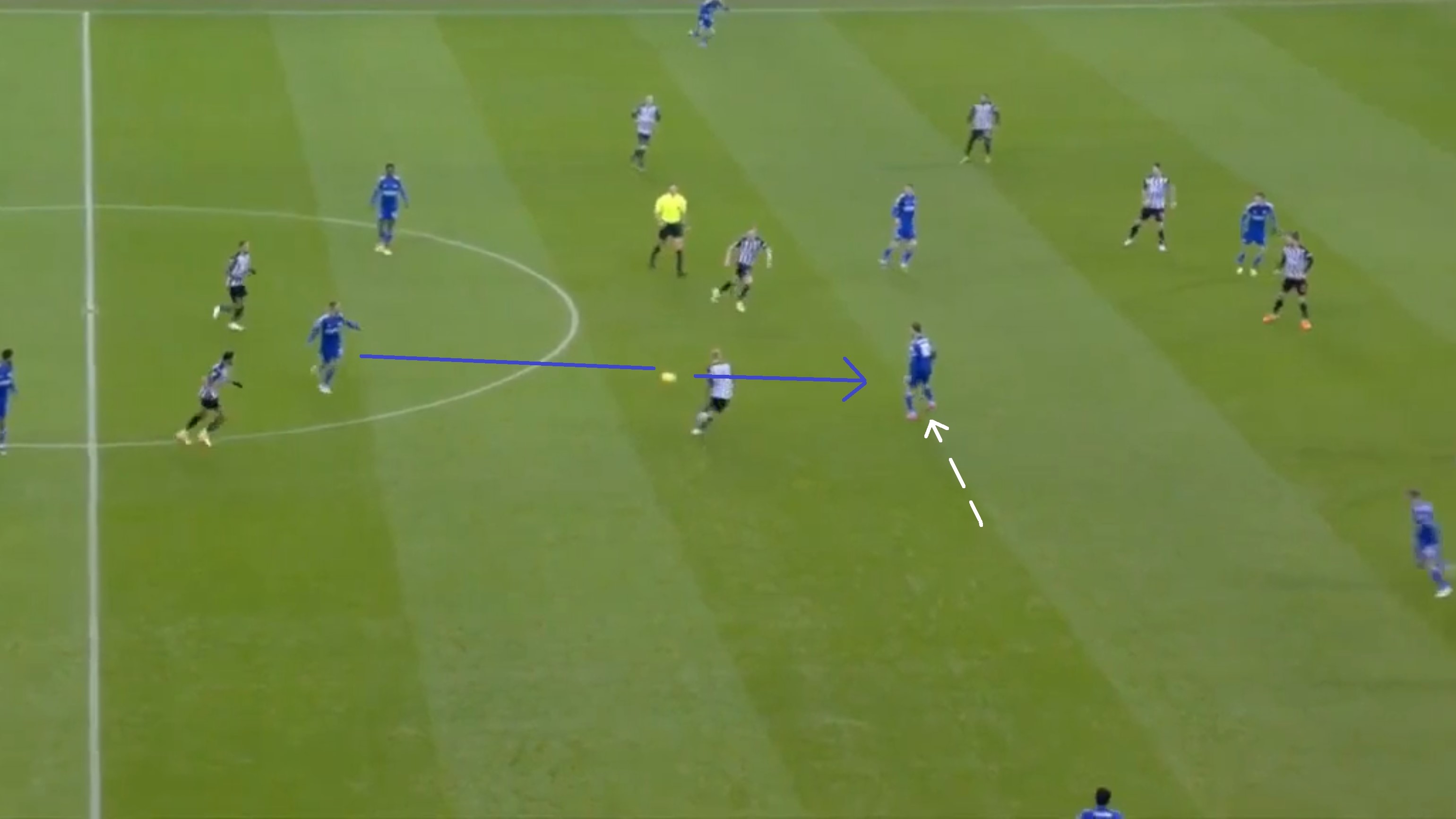 The combination of Maddison and Vardy works well as they can make space for one another. If a defender goes to close down Maddison, Vardy can attack the opening gap. If the defenders sit off to deny Vardy, Maddison has time and space to drive at goal and shoot from the edge of the penalty box, something he can do off either foot.

Sometimes Maddison is joined between the lines by the wingers, particularly if Cengiz Under or Ayoze Perez start from the right. Both play more like inside forwards, dropping in and freeing up the flank for James Justin or Timothy Castagne to overlap. Naturally this opens up the possibility for combination play down the right-hand side to try and get the full-back attacking the space outside the opponent's centre-backs. Below we see Under dropping to receive, dragging the opposing left-back with him, then flicking the ball to Justin overlapping into space. 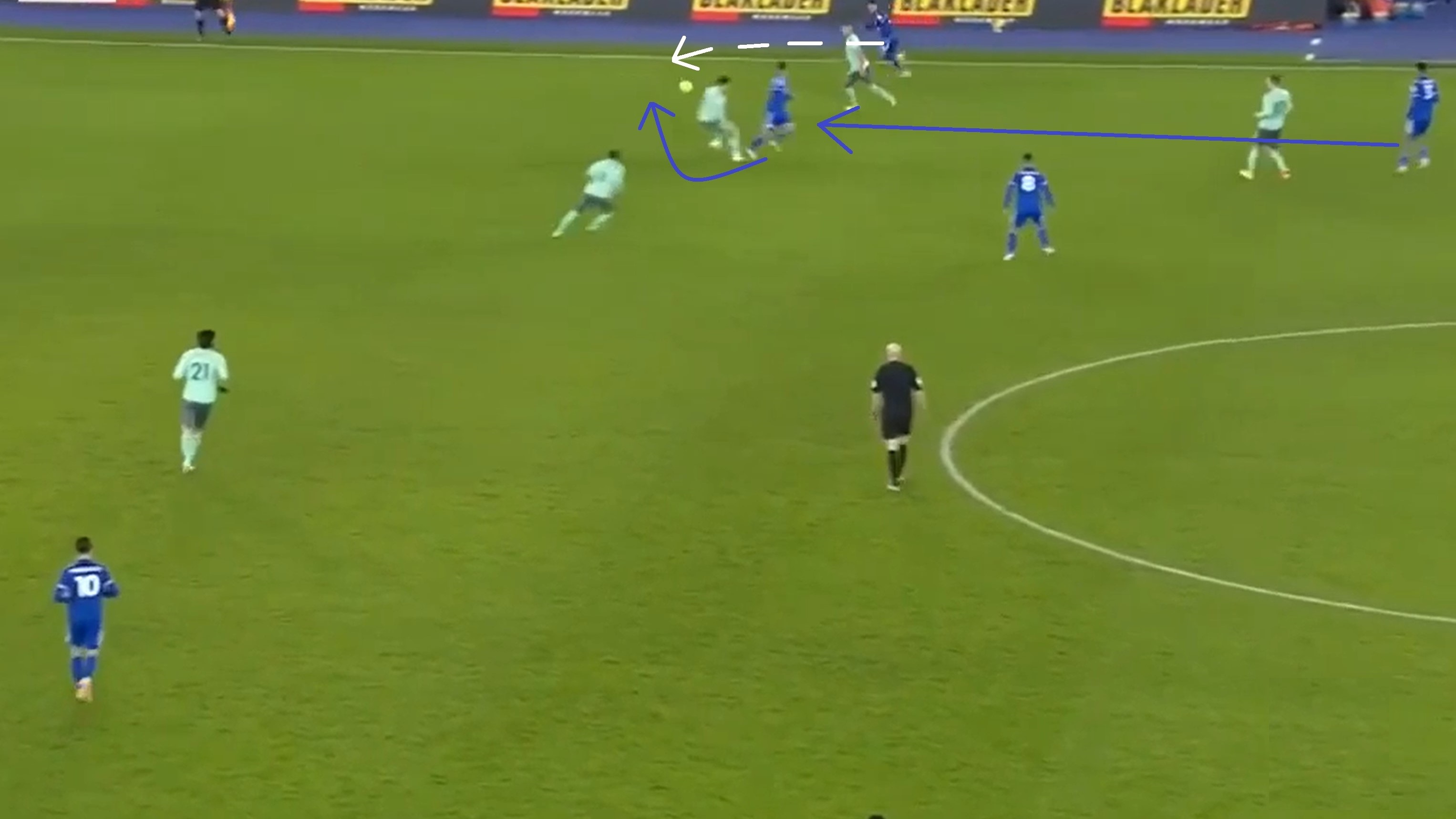 Mark Albrighton is a more direct outlet on the right – he prefers to stay wide and put crosses in or make runs in behind. However, Harvey Barnes on the left is the most potent winger Leicester have. The 23-year-old can come inside and combine, but he excels when staying wider, receiving the ball facing goal before dribbling at his man. With a nice change of pace he's able to get away from defenders, and he's increasingly a goal threat inside or outside the box.

All of this considered, a selection headache for Rodgers will be what to do with Ricardo Pereira. The Portuguese is returning from injury and will be looking to reclaim a regular place in the side. That could be at right-back, though Rodgers has said he is also open to playing him on the right wing.

Pereira is a different type of full-back to Justin and Castagne. While the latter pair are all about speed and timing their runs well, he adds a dribbling threat – he can go around the outside or cut inside and take defenders on. Leicester already have good quality width from their full-backs, but it will only get better with Pereira back in the side.

Vardy has been Leicester's focal point for some time, and remains so this season. With 11 goals and 5 assists he is by far the team's most productive forward, and the attacking play is still based heavily around his pace and movement. When Leicester win the ball they often look for Vardy quickly, playing balls over the top for him to run into space behind. He's always ready on the shoulder of the last man, and offers efficiency in the box. 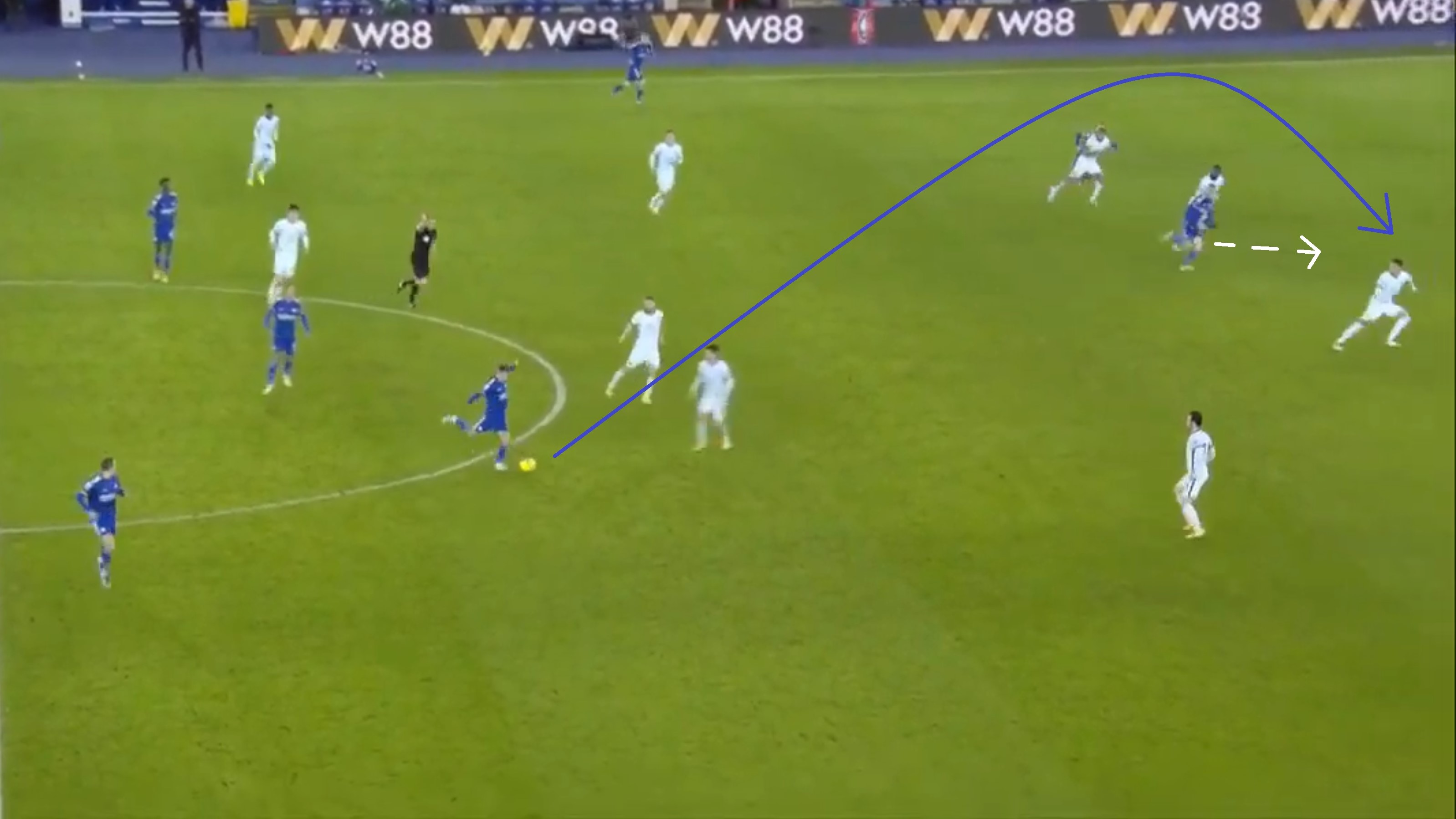 However, when Leicester play more patiently from the back, they work hard on setting up shots the right way. Without a real aerial presence to hit on crosses into the box, they need to probe, combine and get their full-backs running in around the outside. From there they look to play low, driven crosses or cut-backs for Vardy (or Maddison) to finish on the ground.

Unfortunately for Leicester, Vardy is set to miss at least one or two league games after a minor operation on his hernia. This is a big blow considering the lack of natural alternatives. Perez and Kelechi Iheanacho can take his place, but neither offer the same speed, runs or consistent finishing.

While Vardy won't be out for long, his absence could hurt the team enough for points to be dropped in upcoming games against Everton and Leeds United. With both Manchester clubs hitting good form, failure to win just one of these matches could see Leicester fall away from the top places – at least temporarily.

Leicester are in superb form and have the players to hurt any team in the Premier League, but five defeats in 19 league games indicates they can be hurt themselves. Their defensive record is good, but it could be better. When it comes to pressing they are perhaps less intense than last year, and happier to sit off opponents, but nonetheless they can leave too much space between the lines for teams to exploit.

A bigger concern is their penalty box defending. They aren't the biggest team, which perhaps helps to explain why they concede so frequently from set pieces. Too often they fail to get that crucial first contact from corner kicks, allowing for flick-ons into dangerous areas or headed shots at goal. On top of that, they are susceptible to crosses – particularly early crosses played deep into their area.

Similar failings hurt Leicester at the end of last season. They won just three of their final 10 games, losing four – one of which was a hammering away to Bournemouth that stemmed in part from an inability to make blocks, win headers and clear their lines. Such defensive frailties could be their undoing again this season.

Wednesday night's trip to Everton will provide a stern test of Leicester's championship credentials. They lost 2-0 at home to the Toffees – with the second coming from a corner kick – back in December. Evening things up will provide strong evidence that, this time, Rodgers and his side are in the title race for the long haul.