Chelsea completed their summer transfer window with the signature of Saul Niguez on a season-long loan deal from Atletico Madrid. A 26-year-old Spain international with eight seasons of La Liga football under his belt already, Saul is a highly experienced player and offers competition for places in midfield. But can he break into Thomas Tuchel's side?

Saul is extremely versatile, having played as a left-back and a wide midfielder on top of his usual central midfield role. However, a significant motivation behind his loan move is to get more minutes in his preferred position. "Chelsea has promised me to train in my position (midfield)," he said in an interview with Ibai Llanos. "That is the most important reason for my decision."

With superb close control and vision, Saul tries passes that many other midfielders wouldn't, including flicks and back-heels. He can also play in combination with others, and passes accurately over long range to get in behind defences. He also has the capability to drive the ball forward single-handedly on occasion.

At 6ft tall he combines his technical qualities with a strong frame, making him hard to knock off the ball. And while he isn't particularly quick, that physicality is something he also makes use of defensively to obstruct attackers and win tackles.

A solid passer who also brings some robustness and defensive nous, Saul should adapt to the Premier League. He also offers Chelsea a left-footed option, something they previously did not have in central midfield. However, to get regular minutes he will need to move ahead of N'Golo Kante, Jorginho and Mateo Kovacic in the pecking order.

How does he compare to Chelsea's other midfield options?

Unlike Manchester City and Liverpool, who typically play a single base midfielder in Rodri and Fabinho respectively, Chelsea deploy a double pivot with responsibilities shared by two players. The key is to ensure there is balance, with protection of the centre-backs, accurate passing to start attacks, and well-timed forward forays.

Defensively, Saul isn't in the same category as Kante, who is arguably the best ball-winning midfielder in the world thanks to his anticipation, speed and energy. However, the Spaniard does have a higher 'Tackled vs Dribbled Past' percentage than Jorginho, which suggests he is harder for opponents to get past.

As a passer, it's difficult to compare Saul's stats to the other three Chelsea midfielders. Last season, he was playing for a more defensive, less possession-based Atletico side, so it is natural that he did not play so many passes as Kovacic, Kante and Jorginho.

More telling is the fact he completed a smaller percentage of the passes he did attempt. This could tie into his greater risk-taking and ambition. However, he averaged roughly the same amount of 'key passes' (passes that led to a shot), which may indicate his lower pass accuracy reflects a relative lack of efficiency.

Where Saul stands out is his control. He doesn't attempt or complete as many dribbles as Kovacic, who is superb at evading pressure and breaking the lines with a drop of the shoulder and a burst of pace. Kante offers more threat on the counter-attack, but Saul's dribble success of 80% backs up the notion he can drive the ball forward single-handedly.

Where will Saul fit in?

Saul made his debut in Chelsea's 3-0 win over Aston Villa, but didn't impress. He made a number of mistakes on and off the ball, before being substituted at half-time by Tuchel. In the following images we see him being tackled on the edge of his own box, then passing to an opponent. It looked as if Saul simply wasn't prepared for the pressure he would face from an aggressive opponent. 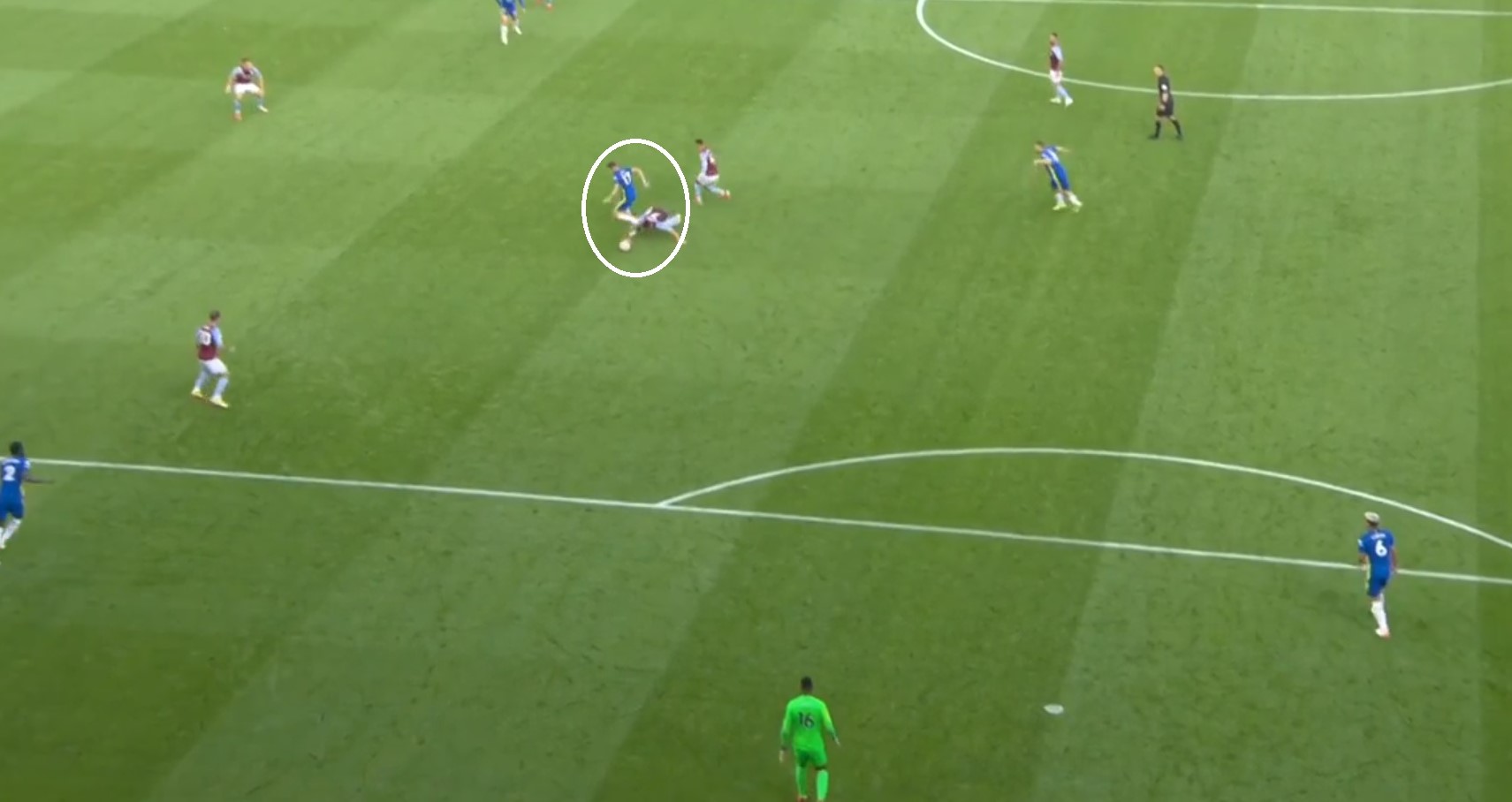 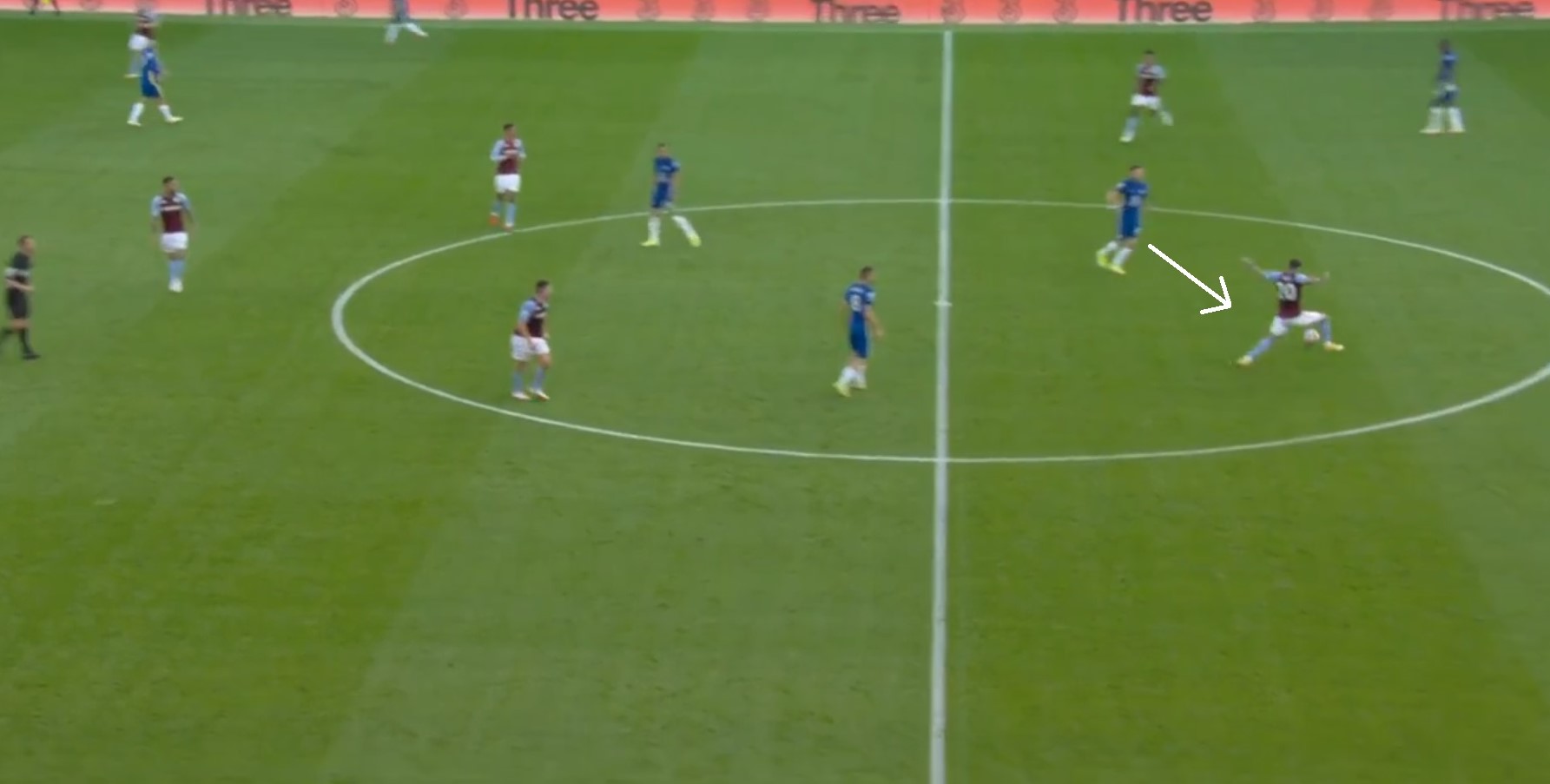 After the match, Tuchel did not hold back in his assessment. "We could see Saul struggle to adapt a bit to the...intensity of the Premier League," he said. "He struggled a bit with ball losses and created some...chances for Aston Villa. I thought [it] better to change him."

Of course, that was Saul's first game, and it came just over a week after he arrived on transfer deadline day. With more time on the training ground with his teammates learning Tuchel's 3-4-3 system, he should be in a better position to show his qualities.

The challenge, however, will be nailing down a regular starting position. Kante's injuries mean he won't always play, but when fit he tends to start. Jorginho is highly-rated by Tuchel, and Kovacic is the best all-round creator (passing and dribbling) of the bunch.

Saul should adjust to the Premier League and fit Chelsea's unique setup. But forcing himself into the line-up will be tough with such strong competition for places. With that in mind, he may need to content himself as a squad player, rotated in for specific games when Tuchel deems him necessary.