Tactical analysis: How has Bielsa transformed Leeds & can it bring Prem success?

Leeds United could not have made a more exciting start to life back in the Premier League.

Their first two fixtures ended 4-3, one in their favour against Fulham and the other a loss to Liverpool. All of their most recent three games have ended in three-goal margins (one a win, the other two defeats). Only seven teams have scored more goals than they have, and no team has conceded more.

Marcelo Bielsa has been the mastermind behind the entertainment. He is the manager responsible for guiding the club back into the top flight after one-and-a-half decades away, and he has refused to sacrifice tactical principles now his players are up against the best in the country. This has led to some stunning football, riveting contests, but also heavy defeats.

Here, we at Tribal Football try to pin down exactly what type of manager Bielsa is, how well his tactics are working in the Premier League, and whether Leeds are on course to survive or thrive this season.

To get an accurate picture of Bielsa we can compare him to some of the Premier League's greatest managers. Alex Ferguson was a pragmatist who was ruthless in evolving his Manchester United team, something which helped him to success in different eras. His long-standing rival, Arsene Wenger, was more concerned with aesthetics. Between the two is Pep Guardiola, who combines relentless desire to win with a very specific style of play.

Bielsa is probably somewhere between Guardiola and Wenger. He has taken his tactical approach with him into every job, but he is also extremely demanding of both players and club hierarchies to improve results. He isn't averse to walking out early if he doesn't like what he sees, or if a better opportunity to build his vision of football comes along.

That's Bielsa off the pitch, but what about on it? Well, one of the most noticeable traits of a Bielsa side is the intensity of their pressing. He is a devotee of man-marking, something that allows for instant pressure on the ball receiver, and he uses this in midfield and defence. His forward line are responsible for disrupting opposition build-up, with the pressing tailored to the opponent. 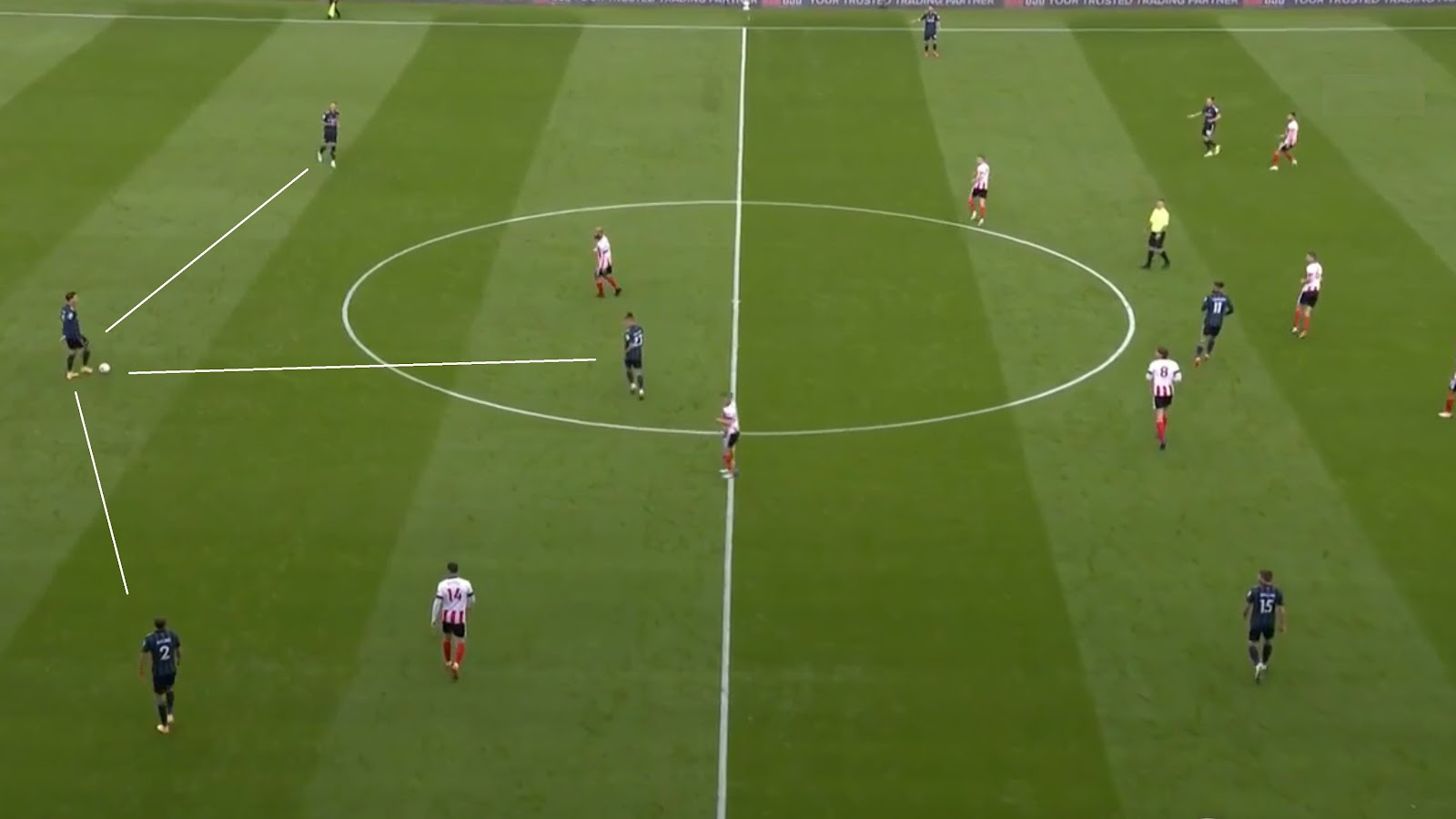 Offensively, Bielsa prefers a 4-1-4-1 but tends to tweak the shape depending on how many strikers the opponent lines up with. Against a front two (see Sheffield United above), he will take out a midfielder and add an extra centre-back. When up against a lone striker (like Manchester City) he will stick with two centre-backs. This essentially ensures Leeds always have an extra man in build-up from the back.

Bielsa always has plenty of width in his team, and at Leeds this comes from Helder Costa and Jack Harrison. Switches of play are used to get the wingers into 1v1s, with the full-backs making support runs inside or outside of them. In the following example we see Luke Ayling and Stuart Dallas pushing forward against Manchester City, with the latter running inside onto a through ball. 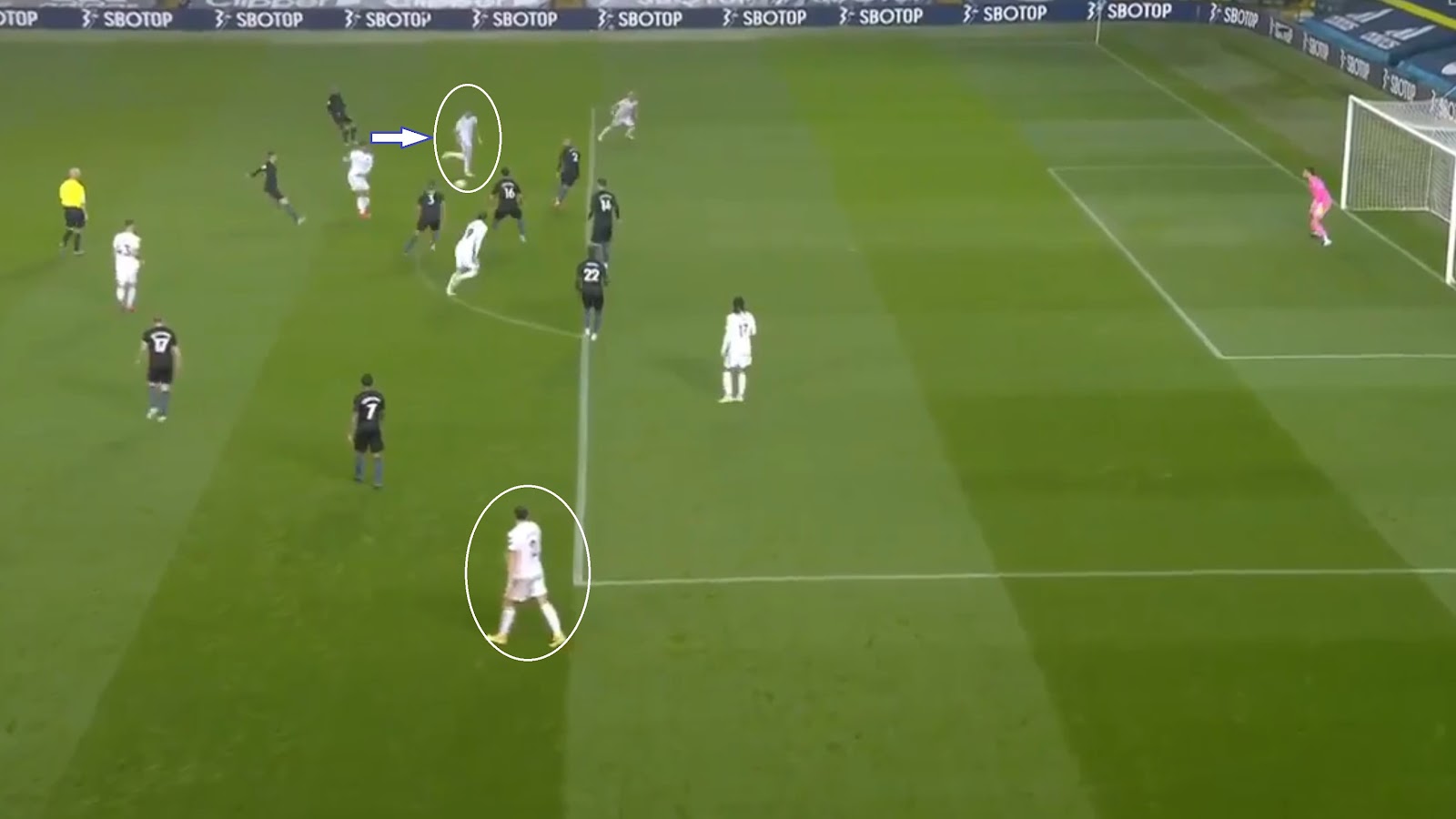 The full-backs aren't the only forward runners, as two of the three midfielders in Bielsa's 4-1-4-1 system will also push on and even make runs beyond the last line when possible. As a consequence, when crossing into the box, Leeds tend to have at least three or four players who can attack the ball.

There are also a lot of rotations, with players interchanging positions to create and exploit space against opponents. With Leeds this can be seen out wide, with the full-backs, wingers and advanced midfielders rotating, or in the centre, with the advanced midfielders and striker Patrick Bamford moving laterally and vertically.

What does Bielsa need?

Bielsa's places a lot of pressure on the central defenders. Not only do they need to be comfortable receiving and passing the ball, but they need to be capable of long diagonals to the wingers. On top of all that, they need speed to cope with opposition counter-attacks and aerial strength to win headers when Leeds' pressing forces long balls.

Right now, this is an issue, particularly with Robin Koch. A Germany international signed for a reported fee of £13 million in the summer, Koch has not yet settled into the system. He has made a number of defensive errors, and hasn't proven to be a dominant aerial presence. If Leeds are to continue playing the way they are, they need their centre-backs to be more forceful and reliable.

Goalkeeper Ilhan Meslier looks like a good prospect at just 20 years of age. He's 6ft 6in with good reflexes and is fairly comfortable on the ball. In front of the centre-backs, Kalvin Phillips has won England caps having demonstrated a combination of physical strength and an excellent passing range.

Out wide, Leeds could do with reinforcements. Bielsa likes to play with two full-backs and two wingers in every game, regardless of his choice of system, but he doesn't have a lot of competition for places.

Ayling is a capable of playing right-back or centre-back in a three or a four, and can drive possession forward single-handedly, while Dallas is equally flexible, fit and intelligent, offering lots of movement wherever he plays. Further forward, Harrison and Costa are both good dribblers with pace, and the former is an accurate crosser. But this quartet need more effective alternates to rotate in when necessary. 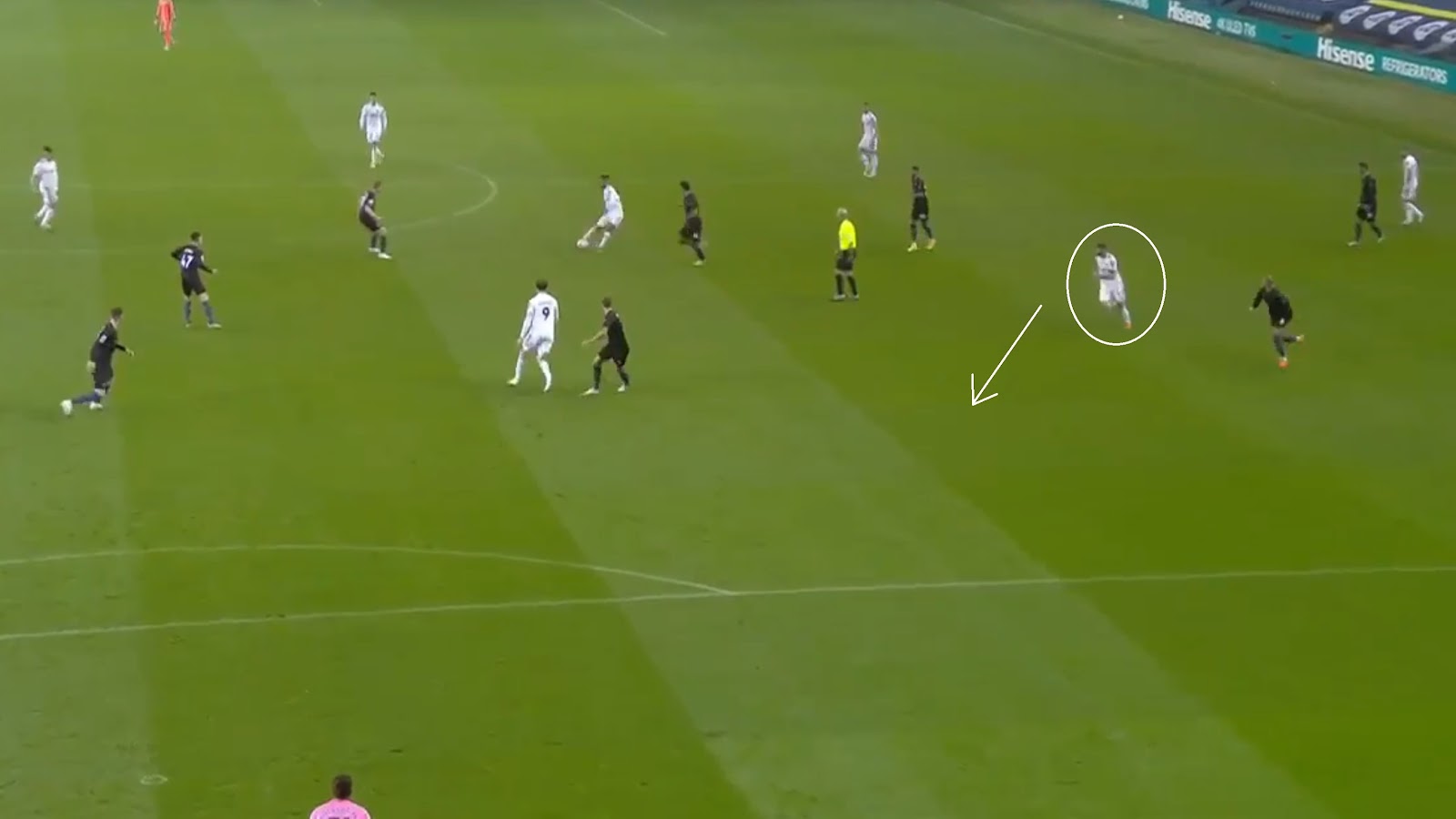 Up front, only four Premier League players have scored more than Bamford's seven goals this season. He has adjusted brilliantly to top-level football, showing clever movement and finishing both precise and varied. Behind him Klich, as seen in the example above, offers exceptional movement to find gaps and make himself available. He is also a fine passer and shooting threat from outside the box. But he needs a partner in attacking midfield.

Pablo Hernandez's impact is on the wane, which is understandable considering he's now 35 years old. Tyler Roberts has shown glimpses of quality, while new signing Rodrigo hasn't quite made his mark on a consistent enough basis. If Rodrigo can produce more in the next few months this won't be an issue; otherwise, more spending on this position could be required in January.

How successful will Bielsa's be in the Premier League?

Bielsa's Leeds have frightened a number of the top Premier League sides this season, but they are also conceding far too many goals. Part of this is systemic – the forward runs and rotations Bielsa asks for can leave the team shapeless and without numbers behind the ball in defensive transition, leaving them open to counter-attacks.

There is also the issue of a defence based on 'man-to-man' coverage, which can be broken the second one player switches off. We see an example of this here from Leeds' defeat to Crystal Palace. Leeds have just lost the ball, and to win it back quickly they go man-to-man. But nobody covers Jordan Ayew (circled), so he is free to receive, turn, and dribble forward into space. 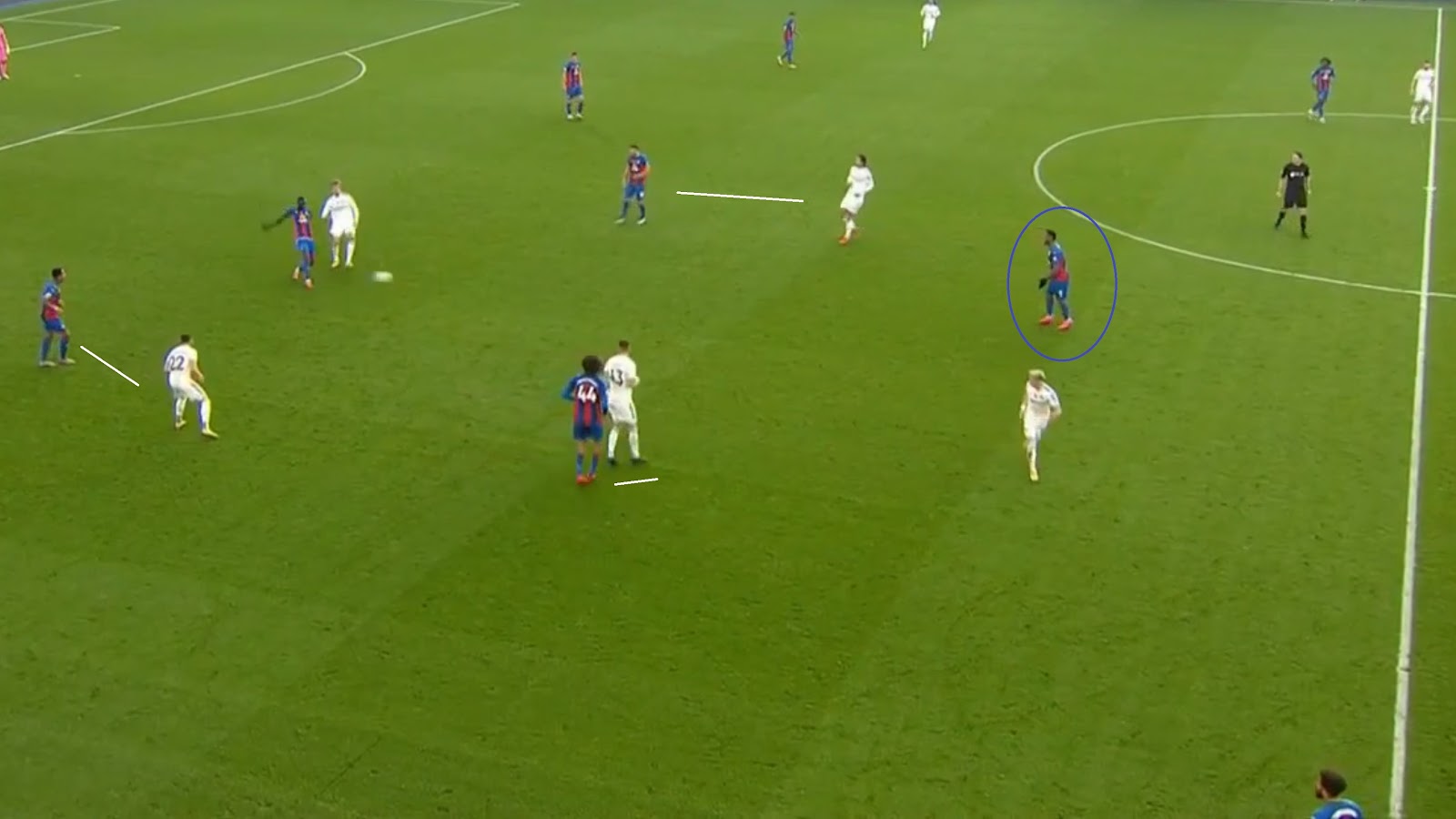 This defensive openness is reflected in the type of goals Leeds concede. They have let in a number of goals from bad tackles leading to penalties, which is partly because they aren't organised and players rush into duels they can't win. Leeds also concede from balls played through an open back line, and set pieces, which again are often given away by last-gasp defending after the midfield is opened up.

Bielsa should be concerned that his side are being penetrated so consistently so early on in the season. The uniqueness edge associated with his of play already seems to be fading, and the physical demands his approach asks of his players may not bode well at the tail-end of a gruelling first campaign back in the Premier League.

If new arrivals like Rodrigo and Koch up their game in the months to come, Leeds could be slightly stronger at the back and going forward. But this is unlikely to cure the systemic openness of Bielsa's tactics. Their attacking firepower may blow some teams away, but whenever it doesn't points are likely to be dropped.