Barkley credits Tuchel for turning around Chelsea career: Managers don't do that

Tactical analysis: How Arsenal lost to Villarreal & what they must do to reach Europa League final

Arsenal salvaged a vital away goal in a narrow 2-1 defeat away to Villarreal in their Europa League semi-final first leg, but they were second best for large spells of that game. Ahead of the return clash at the Emirates Stadium this Thursday, Mikel Arteta will need a massive improvement from his side to seal a place in the final.

Arteta chose a 4-2-3-1 formation for the first leg. However, with Alexandre Lacazette out injured and Pierre-Emerick Aubameyang still returning to full fitness, he opted against fielding a natural No.9 up top. Instead, Emile Smith Rowe, an attacking midfielder, led the line with support coming from Martin Odegaard, Bukayo Saka and Nicolas Pepe. Thomas Partey and Dani Ceballos were the base midfielders, screening a back four of Calum Chambers, Rob Holding, Pablo Mari and Granit Xhaka.

Villarreal, managed by Arteta's predecessor Unai Emery, set up in a straightforward 4-4-2 system. Gerard Moreno played alongside Paco Alcacer up front, while Samuel Chukwueze provided width on the right. On the left, Manu Trigueros tended to tuck inside and play closer to central midfielders Etienne Capoue and Dani Parejo. Juan Foyth, on loan from Tottenham, started at right-back, with Alfonso Pedraza on the other side while Raul Albiol was partnered by Pau Torres at centre-back.

The biggest problem for Arsenal in this game was essentially self-inflicted. They tried to press high, with the wingers responsible for helping Smith Rowe. Saka and Pepe would press from the outside in, trying to force Villarreal through the centre where Smith Rowe, Odegaard, Ceballos and Partey would look to overload the Spanish side's double pivot of Capoue and Parejo. But Villarreal were able to play out of this pressure.

Sometimes, the pressing from Arsenal's wingers simply lacked intensity. Three minutes in, Pepe half-heartedly jogged towards Albiol, giving the Villarreal centre-back plenty of time to assess his options before playing sideways to Torres, who switched out to Foyth, who was now in lots of space. 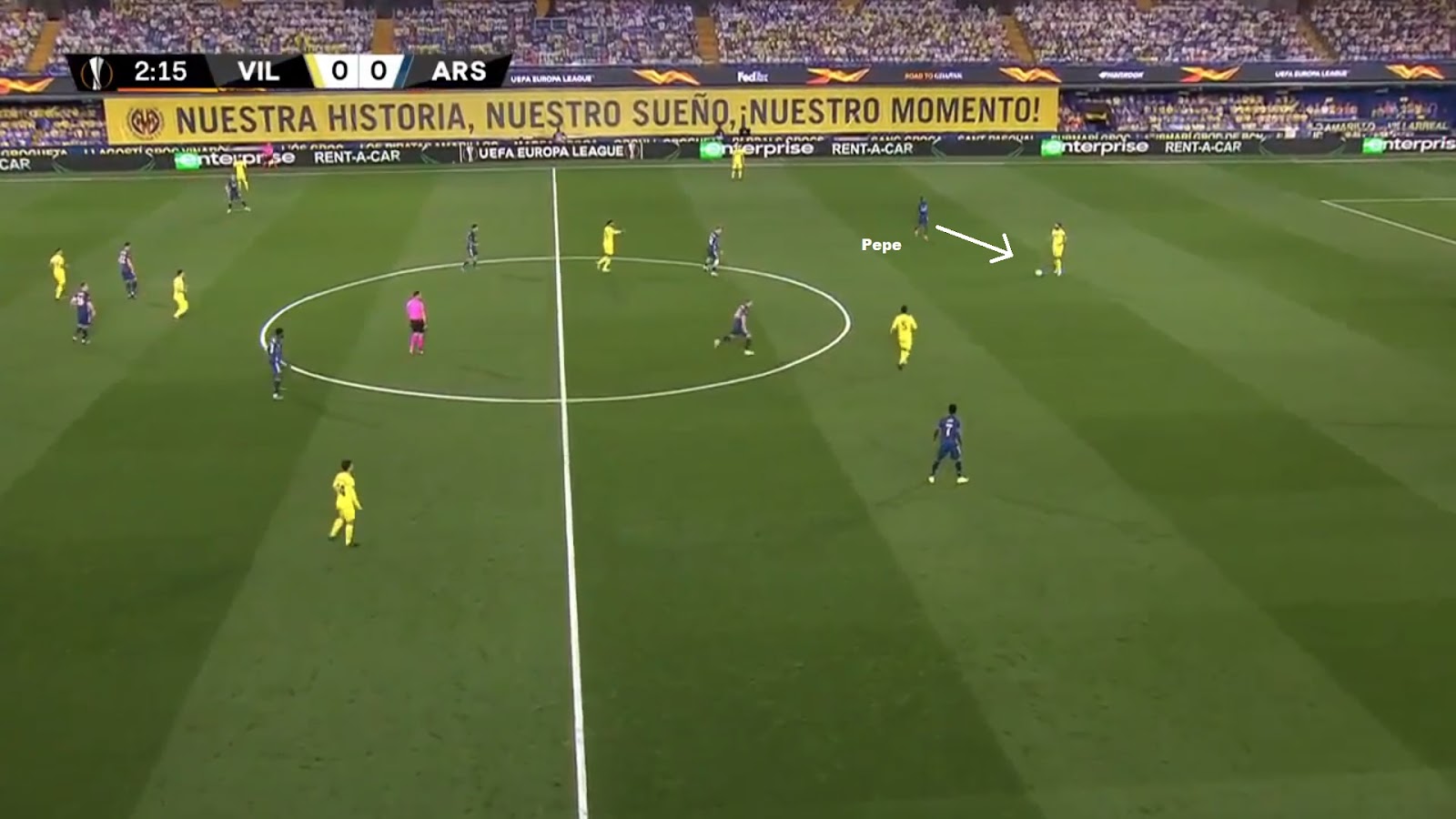 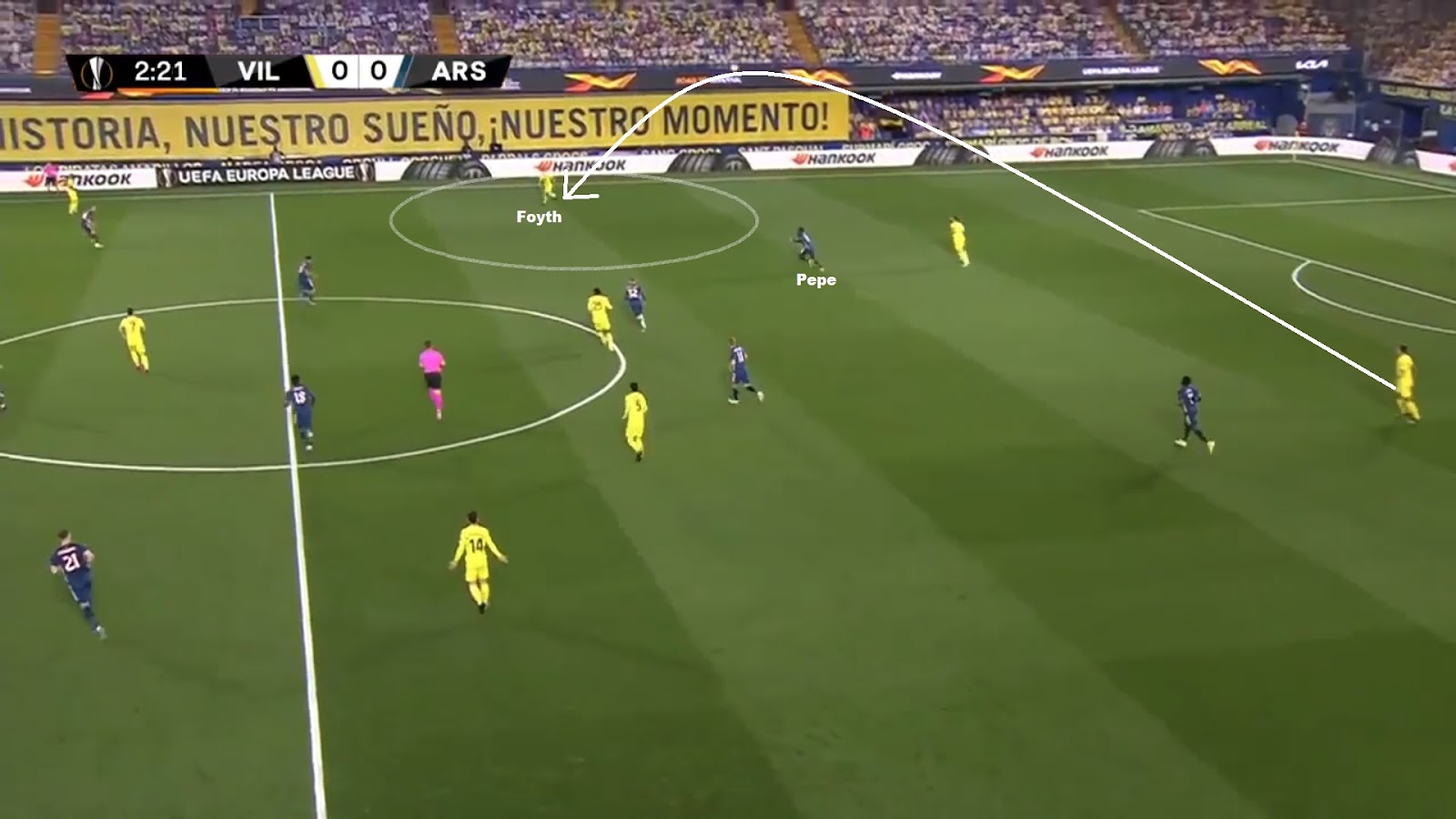 At other times, the urgency of Arsenal's pressing was fine, but Villarreal's centre-backs and midfielders were comfortable handling the ball under this high pressure, combining to find a way out.

In the fifth minute, this had a significant impact on the match. Arsenal tried to press high again. Smith Rowe led, with Pepe and Saka stepping up to press the centre-backs from the outside while Odegaard and Ceballos latched onto Parejo and Capoue centrally. But goalkeeper Geronimo Rulli simply played into the feet of Parejo, who played a first-time pass wide to Foyth. 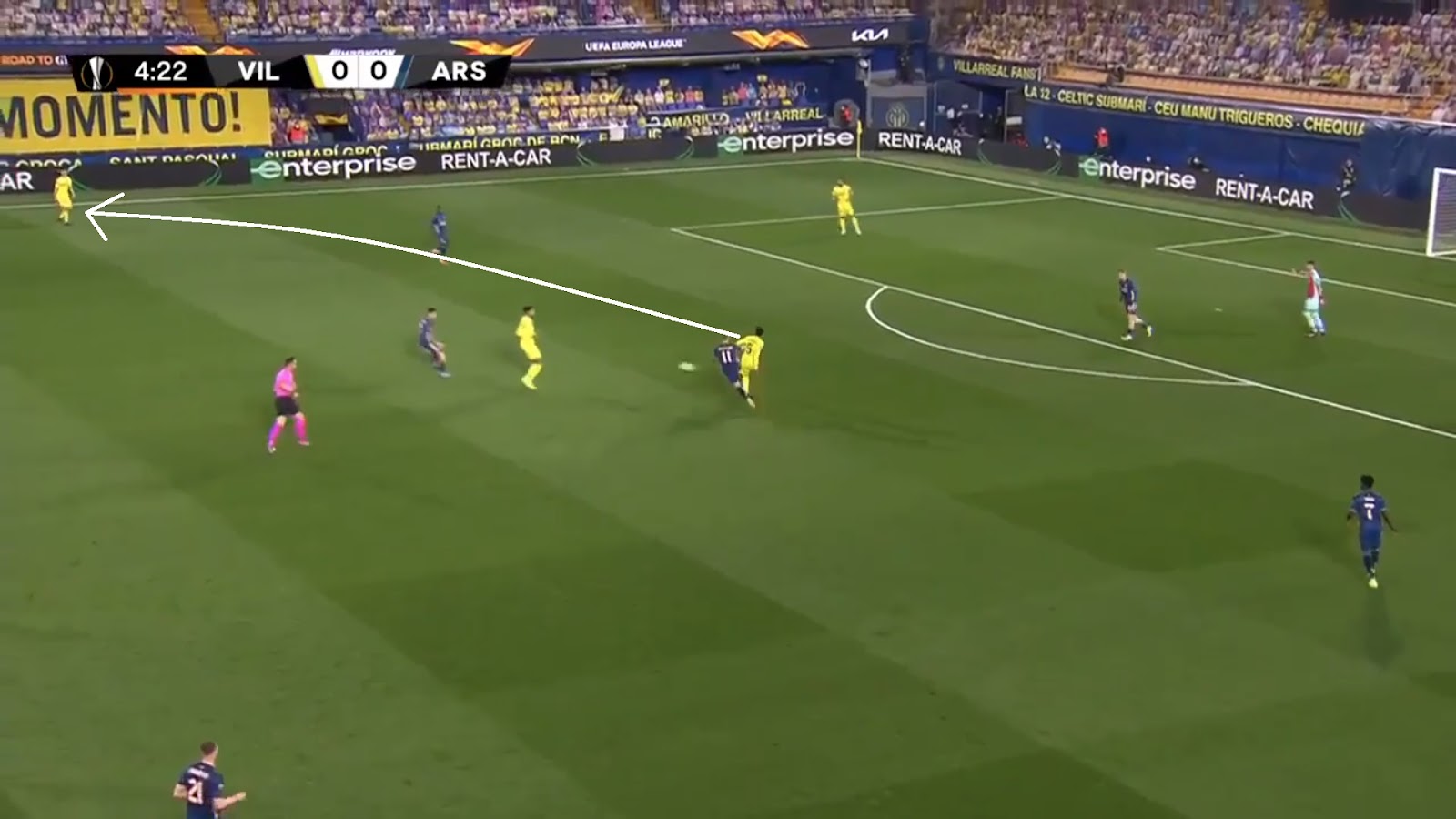 With Pepe stepping up, Foyth once again had acres of space to drive into, only releasing the ball when he reached the Arsenal penalty box. From there Chukwueze took over, Arsenal failed to tackle him, and Trigueros picked up the loose ball to find the bottom-left corner.

Foyth caught the eye in this game, though this was mostly because of the gaps Arsenal's pressing left for him. Time after time, Pepe stepped up to support the high press, the high press failed, and Villarreal could release Foyth down the right side. Sometimes he just attacked the space given; at other times he was closed down by Ceballos or Xhaka and got past them with a burst of speed. Either way, he was causing a lot of problems. Villarreal's defensive approach wasn't quite as aggressive. From their 4-4-2 they pressed man-to-man - striker to centre-back, winger to full-back, midfielder to midfielder - but not with serious intensity. They appeared happy to let Arsenal have possession while limiting their short passing options.

Arteta's choice of Smith Rowe up front naturally led to an extra option in midfield, as the 20-year-old dropped back looking to make angles for his teammates. However, Villarreal were compact and organised enough to minimise space for Smith Rowe and Odegaard between the lines, forcing Arsenal to play more directly - in the end, 11.4% of the Premier League side's passes were long balls (compared to 9.8% for Villarreal).

Ceballos was sent off early on in the second half, which didn't help Arsenal's chances. At that point they were 2-0 down, with Albiol heading home from a set piece to double Villarreal's advantage. And it could so easily have been more.

Arsenal continued to press as they had before, only now they had one man less. Unsurprisingly, this led to gaps for Villarreal to exploit in a midfield populated only by Smith Rowe (moved back when Arteta brought Gabriel Martinelli on for Odegaard) and Partey. Emery's introduction of Francis Coquelin worked out, as the ex-Gunner frequently found himself the extra man in midfield and nearly set up a third goal for the hosts. 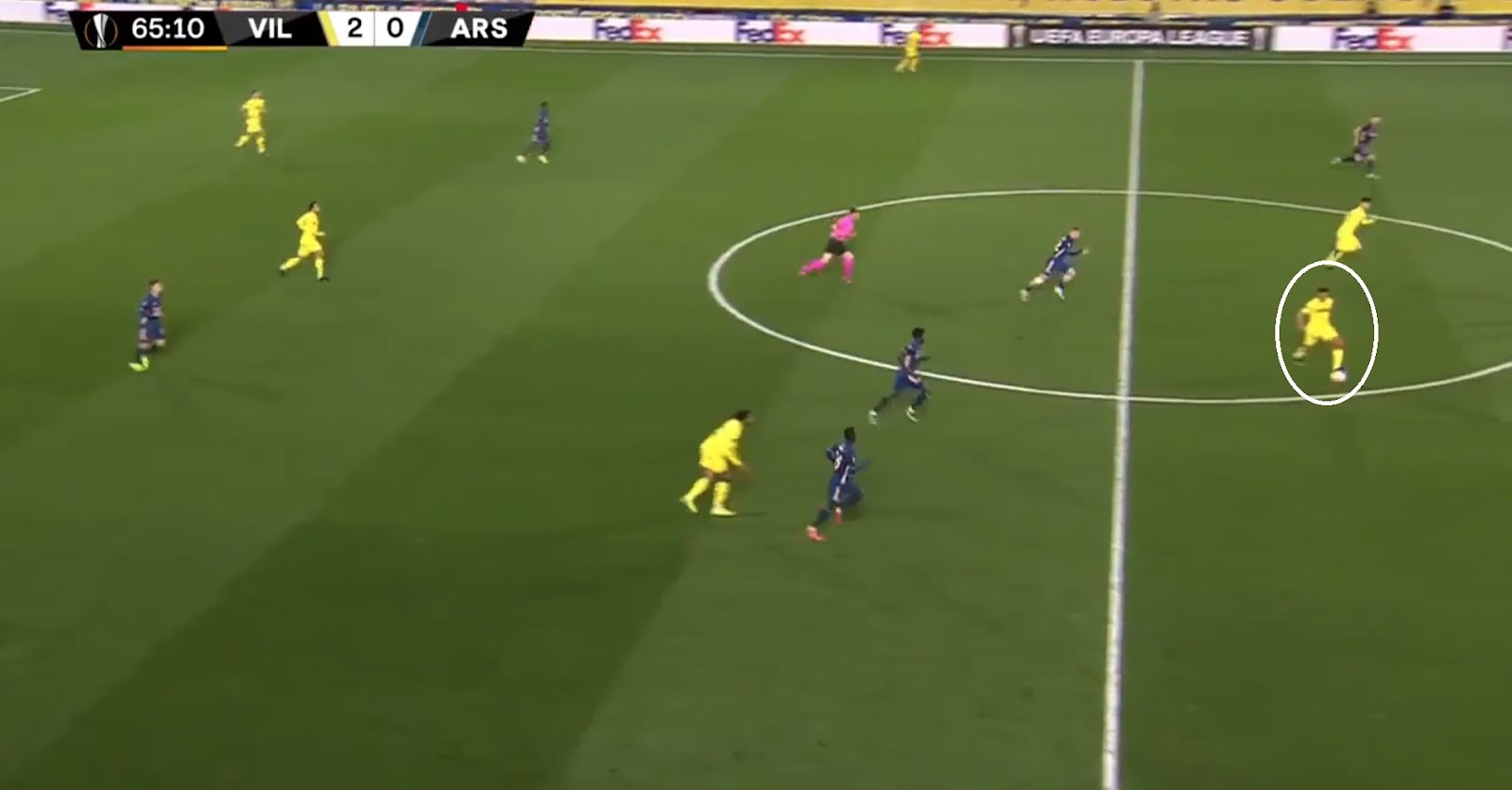 In the end, it took a bit of individual quality and luck for Arsenal to get back in the tie. Establishing possession after another long ball forced by Villarreal's pressing, Saka decided to take on three defenders in the penalty box. One of them got in his way, and a penalty was awarded. Pepe converted, and Arsenal now have an away goal to work with.

The return of Aubameyang, who scored against Newcastle at the weekend, should help Arsenal's cause in the second leg. Playing directly with him running in behind is a different ball game entirely. But Arteta will need to rethink his choice of pressing strategy if Arsenal are to complete the turnaround and reach the Europa League final.