Arsene Wenger has long claimed that he chooses to disburse Arsenal's money as if it were his own, seeking to be cautious with regards to spending so that the club's hard-earned cash does not go to waste.

It was a point he reiterated last week after being quizzed once more about the lack of transfer activity seen at the club this summer.

In many ways, it seems like a sensible approach. As the Premier League has grown in size and popularity, the transfer fees and wages paid out by its clubs have risen at just as accelerated a rate, and at times it feels like pundits and fans alike believe all problems faced by their teams can be solved by just throwing money at them, but this often oversimplifies the key to footballing success. It is also important to consider the dangers of overstretching your means financially, exemplified best by former Premier League sides such as Leeds United and Portsmouth who now languish in the lower divisions after their pursuits of glory nearly drove both of them to bankruptcy.

Wenger's own penchant for working within relatively restrictive financial means is commendable, with his ability to routinely keep Arsenal in the Champions League despite recording a negative net spend during the early seasons spent at the Emirates Stadium is no mean feat. Indeed, for a club seeking to remain at Europe's top table whilst also having to sell its best players every season, there's no man better suited for the job than Arsene Wenger. It earned him a reputation as a pragmatist and a contrarian thinker during a time where spending in the Premier League was becoming increasingly rampant, and whilst the club did not win any significant silverware between 2005 and 2014, his achievements during this period still deserve some respect.

However, the circumstances at Arsenal are very different from what they were then. There is no denying now that the club is one of the wealthiest in European football, with the debt incurred by the building of the new stadium now far more manageable and the vastly improved sponsorship and broadcasting deals have swelled their revenue streams significantly. We're approaching a point where all 20 clubs in the Premier League will soon be amongst the richest in the world, such is the disparity of wealth between the sides in England's top tier and their European counterparts, but Arsenal's global popularity, consistent Champions League participation and unmatched match-day income still makes them one of the richest clubs going.

Back in 2013 the club's chief executive Ivan Gazidis authoritatively claimed that the newfound financial freedom they now had meant signing an expensive superstar like Wayne Rooney would be possible, and whilst Arsenal fans spent most of the summer that year bemoaning the club's inability to back their strong words up with action, they did eventually come through on their promise by paying a record fee of £42.5m for Real Madrid's German playmaker Mesut Ozil. For years the club had refused to spend more than £20m on a player, but now they were willing to pay out more than double that for a genuinely world class star. It felt like a new era at the club had been ushered in, with Ozil likely to be the first of many in a long-line of quality players soon to be arriving in north London. Three years on, however, and that's not quite proven to be the case.

In fairness to the club and to Arsene Wenger, the two years that followed Ozil's arrival weren't all that bad. Arsenal's title challenge in 2013/14 might have ended in acrimony after a string of humiliations on the road for the Gunners but they did finally get the trophy monkey off their back by winning the FA Cup, and in the following season they added another world class talent to their ranks by signing Alexis Sanchez before then retaining the trophy. Two bonafide superstars signed and two trophies won in successive seasons – there was still room for improvement, but after the first few barren years spent at the Emirates this nonetheless felt like a welcome change. Progress was being made, even if it wasn't as fast as some had hoped, but the club looked in a good position to mount a serious challenge for the title.

It is with great disappointment, then, that fifteen months on from the club's 4-0 demolition of Aston Villa and defence of the FA Cup at Wembley, the feeling of hope and optimism amongst the fans has largely dissipated. The meek surrender of their FA Cup title to Watford last season and the ten points they finished behind surprise league champions Leicester City put paid to this notion that Arsenal were a club on the up, and after a summer in 2015 in which no outfield players were signed, there was a key factor in which most were keen to blame for the team's shortcomings – the lack of investment in the squad. The issues which derailed Arsenal's title challenge last campaign were plentiful, with an uncharacteristically low amount of goals scored and yet another injury crisis two reasons that standout, but there is no escaping the fact that not buying any new outfield players ultimately cost Arsene Wenger and his team.

Whilst his frugality in the transfer market had often worked well for the club during times of austerity, it had now cost them on-field success dearly. The same mistakes appear to be happening again this summer. The bitter irony to Wenger's risk-averse nature is that it is effectively upping the stakes for both him and the club at the proverbial poker table. By choosing not to enter into the market this summer to fill the clear holes in the squad – most notably at the back and up front – Wenger is choosing to risk his job, his popularity amongst the fans, his side's place in the top four and, most depressingly, the loyalty of the two world class players he worked so hard to bring to the club. He might well see his desire to keep the purse strings tight as a sensible and proper course of action, but most others perceive it to be a clear sign that he is not showing the ambition a club of Arsenal's size and stature demands.

Players like Mesut Ozil and Alexis Sanchez have experienced what it is like to be at the pinnacle of the game during their times spent at Real Madrid and Barcelona respectively, and their international careers of late have been laded with success – Ozil won the World Cup with Germany in 2014 whilst Sanchez starred for Chile as they won consecutive Copa America titles in 2015 and 2016. Players consider a number of factors when choosing the club in which they will play for – money, location, playing time are but a few key determinants – but the players who command the greatest fees will nearly always choose teams whose ambitions match their own.

For Ozil and Sanchez, both at the age of 27 and with less than two years remaining on their current deals, their futures at Arsenal are very much up in the air. They are both adored by the fans and there is no doubt that the club is desperate to keep them, and it also seems likely that both would be offered vastly improved deals at around £200k p/w each, but what there is question of is whether or not Arsenal can offer them a platform with which they can expect domestic and European success. With unrest amongst the fans regarding a lack of investment in the team and the club currently looking unlikely to challenge the likes of Manchester City, Manchester United and Chelsea for the league title this season, it's hard to make a case that it can.

It would be a galling and depressing outcome for Arsenal if the two star men representing this supposed new era of prosperity at the club chose to seek pastures new rather than commit their long-term futures to the club. The signings of both were meant to be the clear sign that Arsenal were now a club who regularly signed world class players rather than sold them, but after back-to-back summers in which investment in the squad has been scarce it's hard for any fan to blame them for wanting more. Players are in the prime of the career for a handful of seasons at best and they will not want to waste them at a club who do not display the ambition that they do.

With just a week remaining in the transfer window, it's possible that Arsenal do end up with the solid centre-back and star striker the fans have been calling for and they could yet end up mounting a serious title challenge against the odds, but even so, the manner in which they have conducted their business this summer does not befit a club which claims to be able to sign the best players Europe has to offer.

It is particularly sad that after seeing so many of his prized players leave for richer, more successful clubs, the two superstars which Arsene Wenger convinced to join Arsenal could well be set to desert him, but what's even more sad is that he'd have nobody else to blame but himself. His consistent desire not to overpay for players is not a mantra which works when applied to the current state of the transfer market, and whilst he might feel like he is being responsible and accountable by refusing to give in to the expensive demands of other clubs, the reality is that by doing so he is jeopardising all of the progress he spent so many years working to achieve.

With the window shutting fast, unless he decides to spend what is necessary to buy the players which almost everyone else seems to think the team needs, Arsene Wenger could be once more be faced with the prospect of losing his best players because Arsenal are no longer seen as a club going places.

The most tragic thing about that likelihood is that it doesn't have to be that way. The power, and the resources, are there for him if he wants it. Whether or not he chooses to utilise them now, at the 11th hour, could define his legacy. 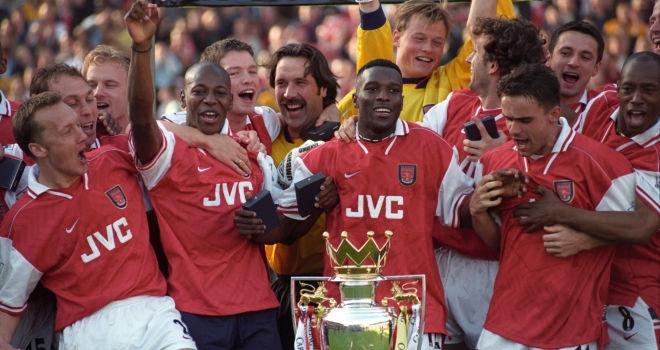